Living and growing up on a small station hidden in some of the most inaccessible country in the east Kimberley I think even the pigs would laugh at what I have seen fly!

Kachana Station has no road access and is dependant on aircraft for its day to day link to the outside world.

The aviation revolution that country Australia was quick to embrace, made what was not so long ago unthinkable a daily occurrence. The logistical nightmare that would have stopped any development of the far corners is now accessible in minutes provided you have the machinery and pilots that can get the job done.

Our little driveway, the 450m strip of dirt in front of the house is where our aeroplane, and at times other planes, gyrocopters or helicopters park. The jobs vary between flying between the two strips located on the station, to town trips to resupply, fighting fires or keeping track of stock. Visitors and social outings all require someone to jump in and fly the aircraft! This can at times lead to quite the debate as to whose turn it is to fly.

We fly nearly everything to Kachana in the Cessna 206 and there are strict guidelines to be observed. The more straightforward and easier loads include cement, cattle-lick blocks and star pickets. Building materials get trickier: structural steel must not exceed 2.7 meters in length, and roofing iron needs to be shorter than 1.8m. This means that steel needs to be but-welded back together and roofing iron joined with an overlap.

Fitting a brand-new slasher in the aircraft required some creativity. It was dropped off at the local engineering shop with clear instructions on how to cut it into three bits. I think they are still shaking their heads after that work order!

Fuel, oil and gas are carefully packaged, as approved by the safety authority, and flown in on what we call the bomb run with no passengers and one single pilot.

Then of course there are the big items that just won’t fit. If it can’t be dismantled and brought to Kachana in bits, we look at options. The closest road is approximately 30 miles east of Kachana, however not accessible from Kachana due to its rocky terrain. Some roofing iron and rear tires for the tractor have been dropped off there and then slung in by helicopter. 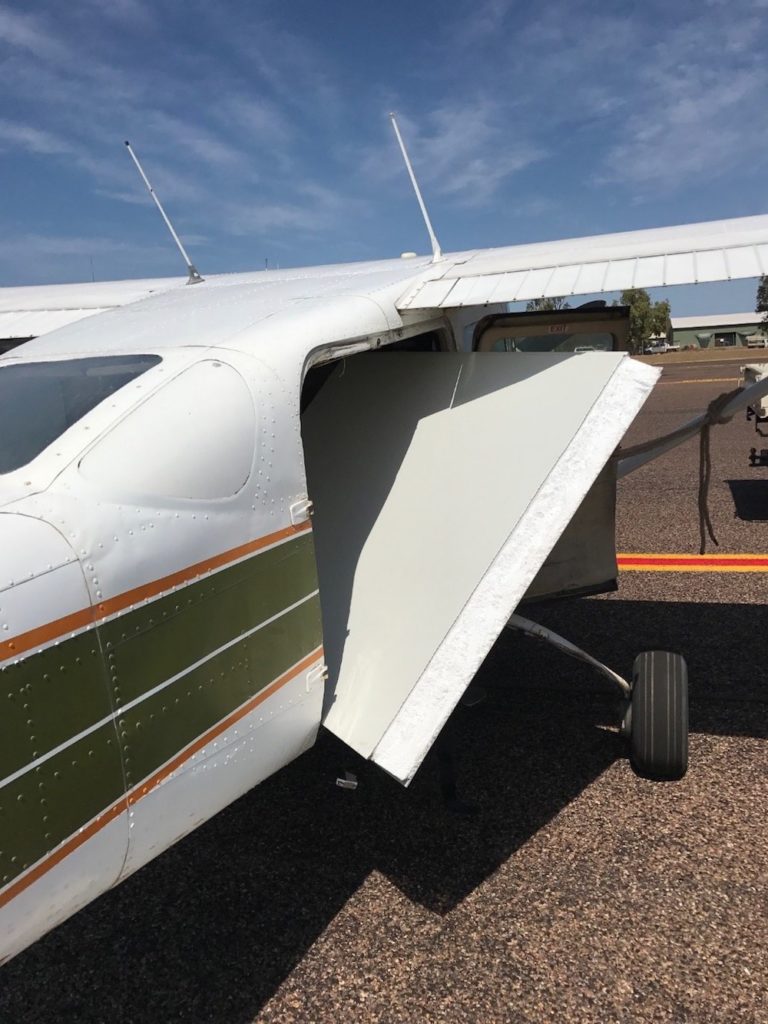 This cool room panel was too big to fly.

As a general rule, the logistics and costs involved in transport, make us limit the size and quantity of what we order. On average, no different to most remote places, the cost in town can easily be doubled by the time you have something home.

As to the animals, well of course they fly too! All our dogs, except for one, love the feeling of flight and are most excited to jump in. The most important job is marking every airstrip they come across as their own. When my sister’s red dog became sick during one memorable flight, I was sternly reminded that this was due to my flying skills and was no reflection whatsoever on the dog itself. 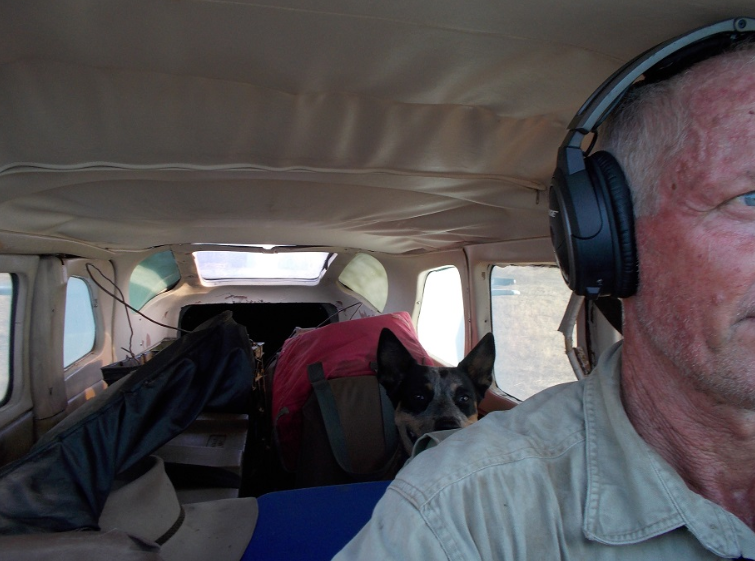 Taxi the dog and dad shifting the stock-camp in VH-EKJ.

Mice, geckoes, frogs and snakes have all travelled by air; some as stowaways, some on front row seats. The chooks usually go off the lay for a bit but I think that’s just because of the excitement!

Our most memorable flight was probably with Pip the Shetland pony. Everything was carefully planned and included Pip having to go on a diet before he was allowed on the plane. The loading took place in town at dawn. Pip was sedated, placed on a tarpaulin and lifted into the plane directly behind the two front seats. Two vets had kindly agreed to be part of this adventure and were armed with enough medication to sedate the pony forever and a revolver in case it should suddenly wake up and decide it did not like flying. The first thing Pip did upon safe arrival and waking up, was to put his head down and eat the fresh grass. It appeared the trip had not rattled him in the least.

As a general rule horses are ridden in and the country is spectacular. 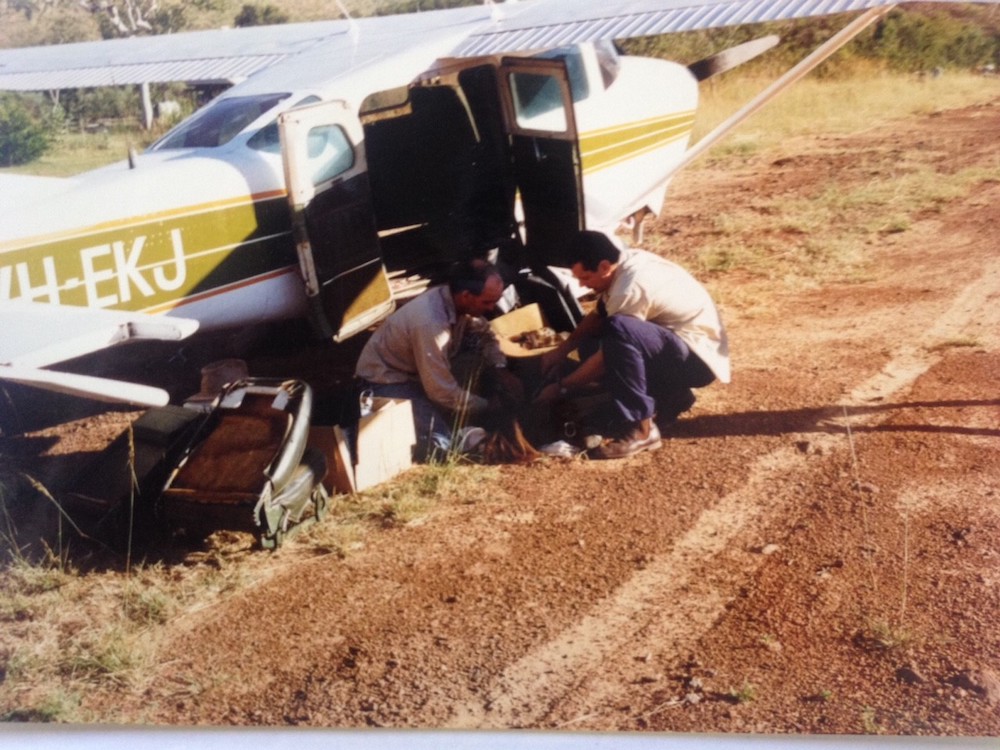 Pip the Shetland Pony was fully anesthetized for 60 minutes. On arrival the two vets are checking that all is well. 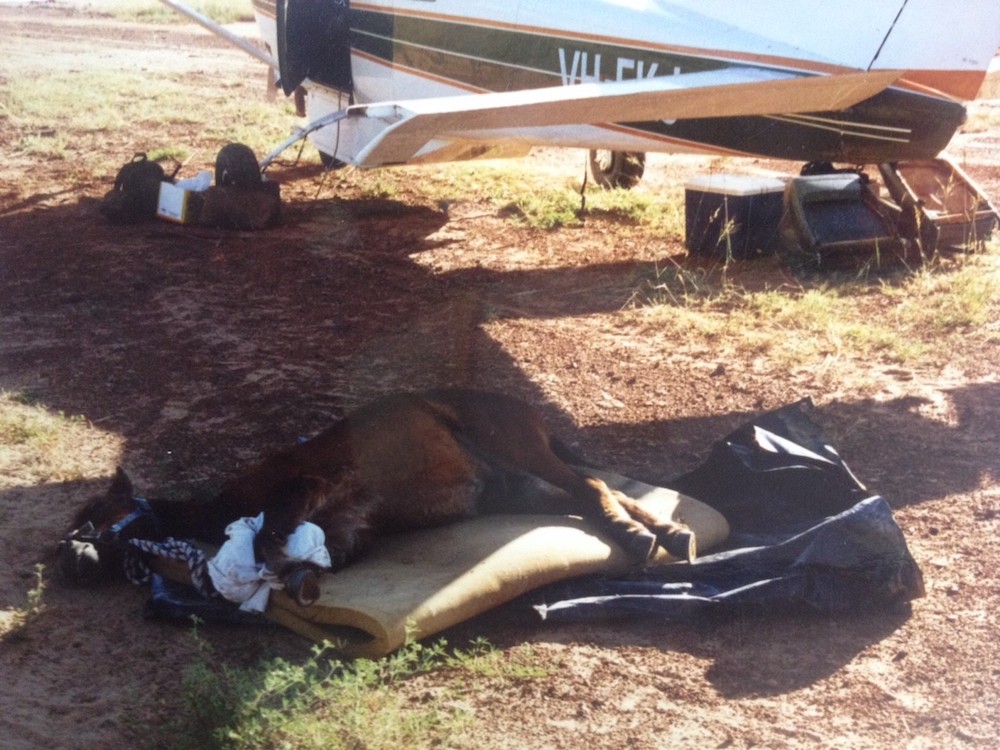 It took a few minutes for Pip to be fully awake. 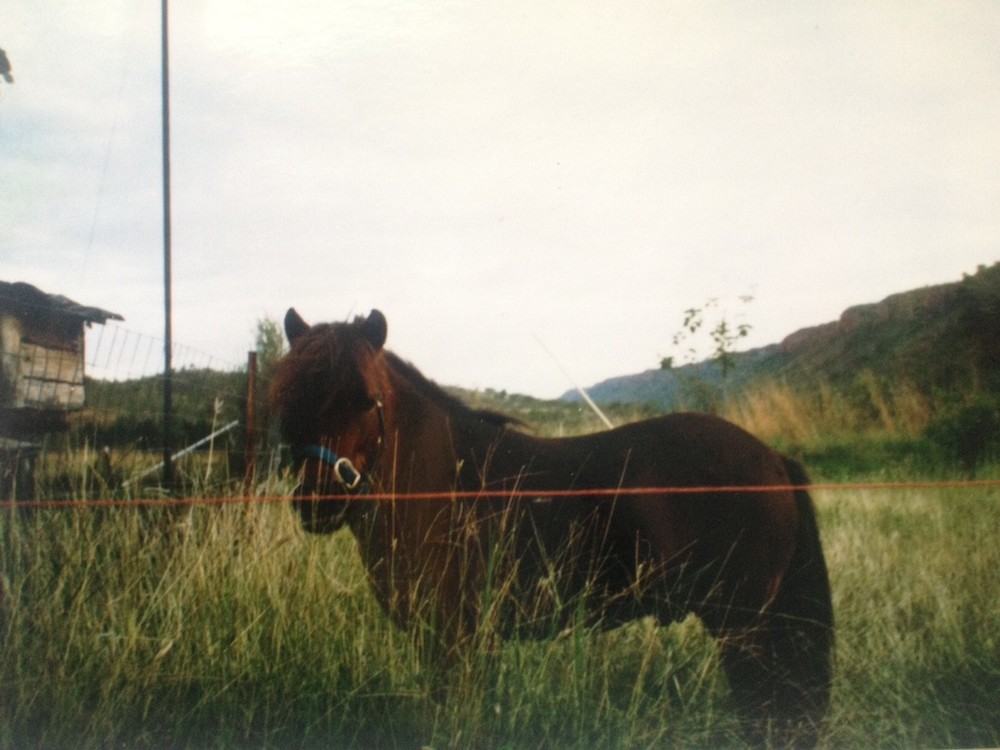 Pip at his new home.

Most of the family love fresh milk. Mum and dad felt milking was a good way of teaching their children some responsibility combined with them learning to become early risers. Owners of the local dairy donated three dairy calves. They were flown to Kachana before they got too heavy. Flying calves is less dramatic than a pony as their disposition is much calmer. All it required was having their front and back legs tied together and an extra person ensuring the animal remained calm and did not get up mid-flight. 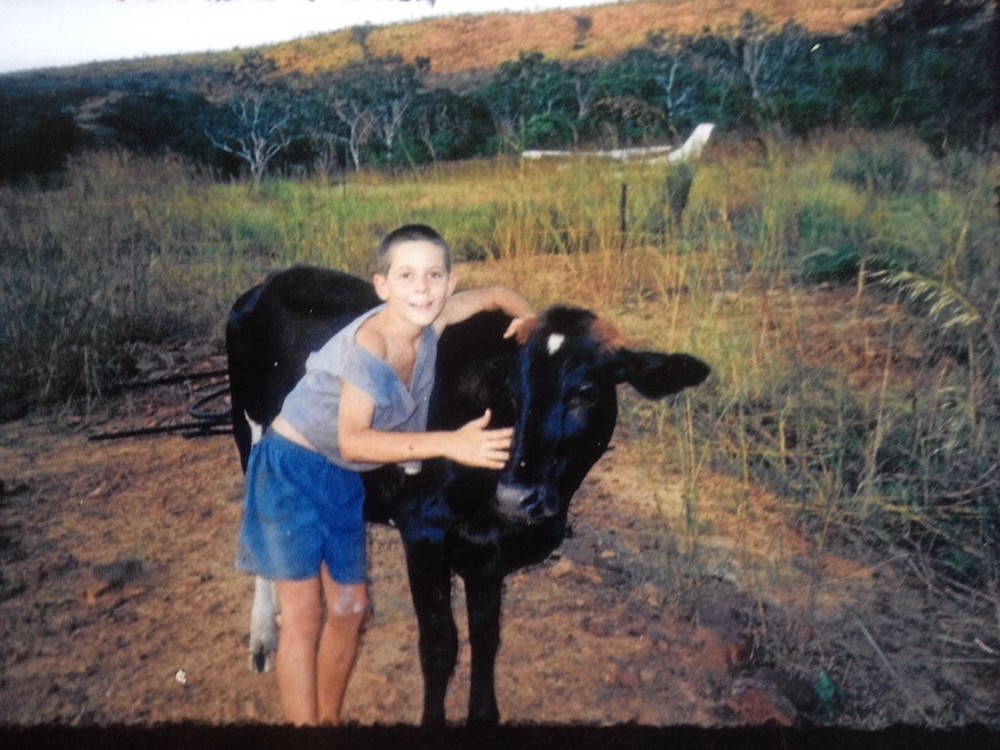 Bobby with our first dairy heifer. 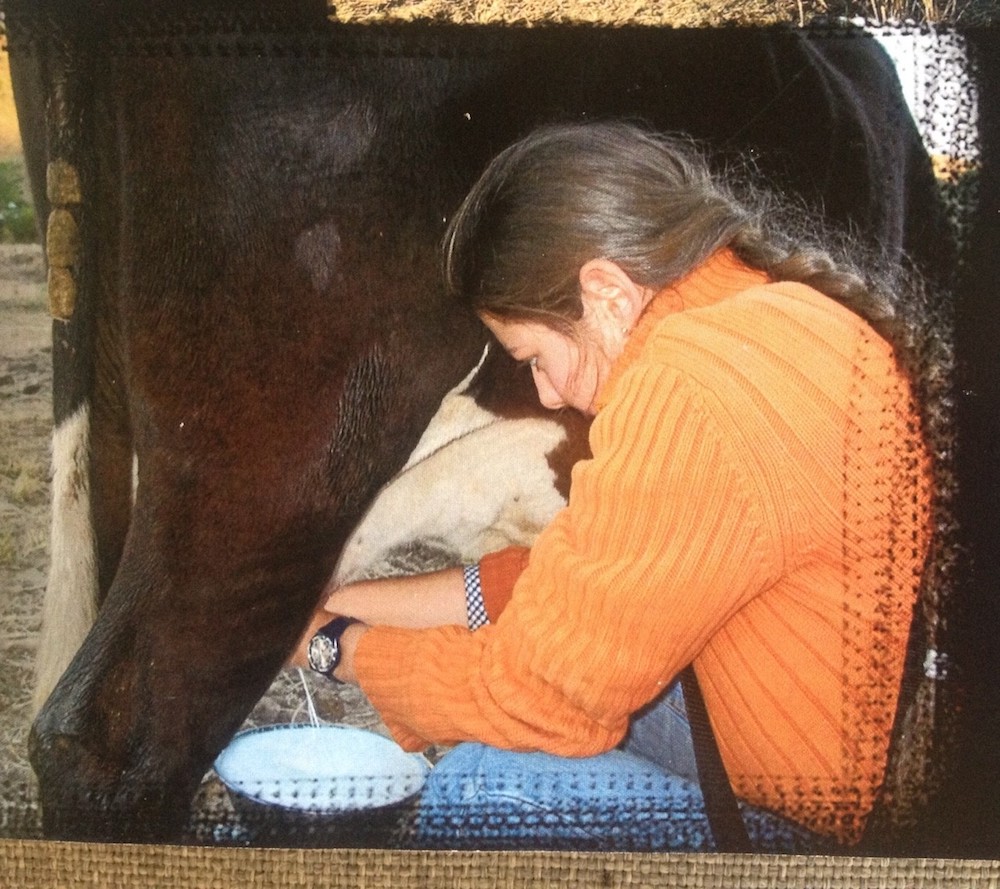 Kimberley had no trouble finding Shorthorn boyfriends and supplied the family with milk for many years.

Being so remote has its positives and negatives. Dropped rubbish, tracks that need maintaining, and the endless reminders for people to close the gates, is something we don’t have. Visitors have to either walk, ride or fly. This almost guarantees privacy which for us as well as for our guests is a luxury.

Often we get asked: “When are you going to build a road?” 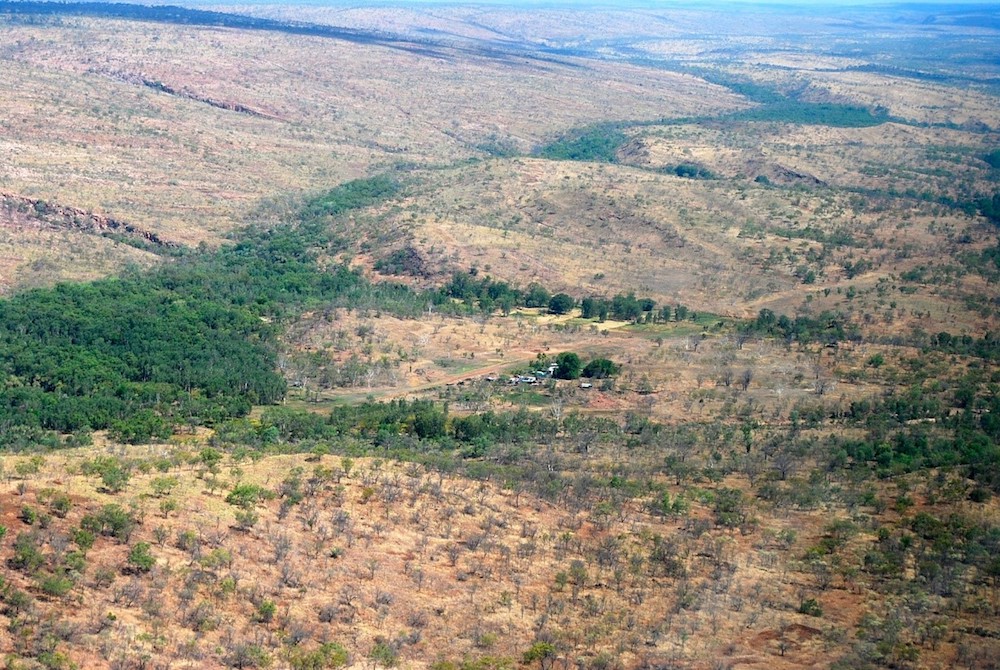