It was starting to get quite dry, and being our first wet in the Kimberley we were told that usually by December we should have had a couple of decent storms. Well, we had had nothing and it was starting to get a little worrying. We were well into the implementation of a failed/late wet season precautionary plan.

The dams were looking low and the feed was getting dry which meant it was time to start moving cattle. Most of the crew had already gone home for the season, so it was just Mick and I and Mackenzie, our 2 year old. We were spending day after day checking bores, starting generators and plumbing in new troughs so cattle that usually relied on the dams would have access to water. As most things go out here, there’s no show without a punch, just as you begin to get on top of one thing (in this case the water), something else would throw its arms up at you. 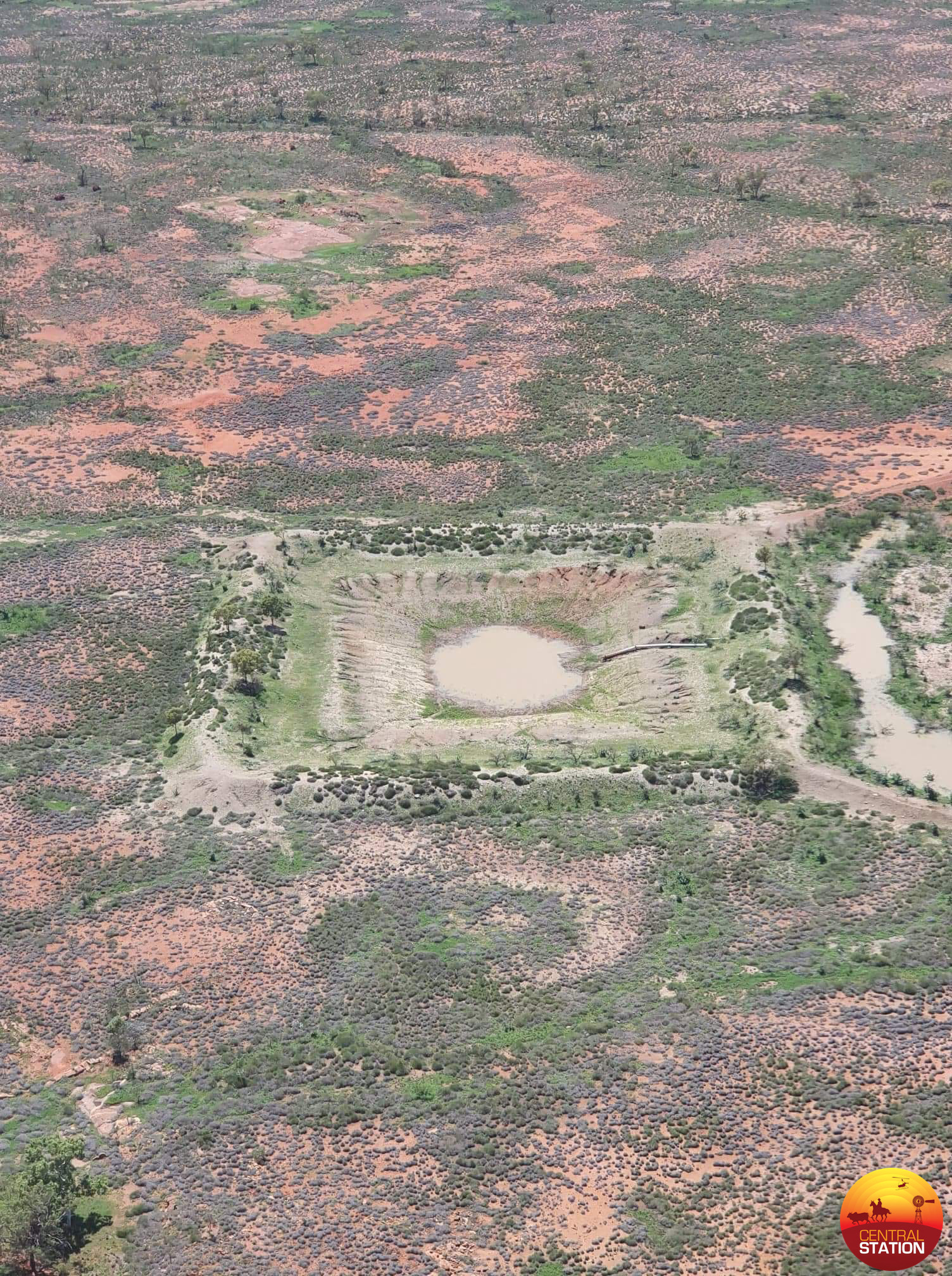 Over an area of 480,000 hectares including our lease block we look after, Mt Pierre Station, we have 16 dams – all of which needed checking on a weekly basis. By mid-January there were some dams that needed to be checked daily for cattle that may have become stuck.

Incorporated into the dam run was ensuring all the bores were functioning and keeping up with the water demand from the cattle. Between the land area and the distance between water points, as we were finishing getting around Bulka, Mt Pierre would need to be checked, then once Mt Pierre was finished Bulka would need to be checked again. It turned into a constant rotation of waters and in amongst the monitoring and repair of waters stock lick levels had to be maintained as well. We usually tied it in with every 2nd bore/dam run to load the truck and drop lick as we went.

Having Farmbot (wireless water monitoring) was unbelievably handy at this time. It didn’t stop the need to check the bores but it helped to know where and if there was an immediate problem in the water supply. (Editors note: Farmbot is a remote water monitoring program, so people can check the water level of their tanks etc. from their smartphones or computer. You can watch a video about it featuring Matt Wood from Blina Station here). 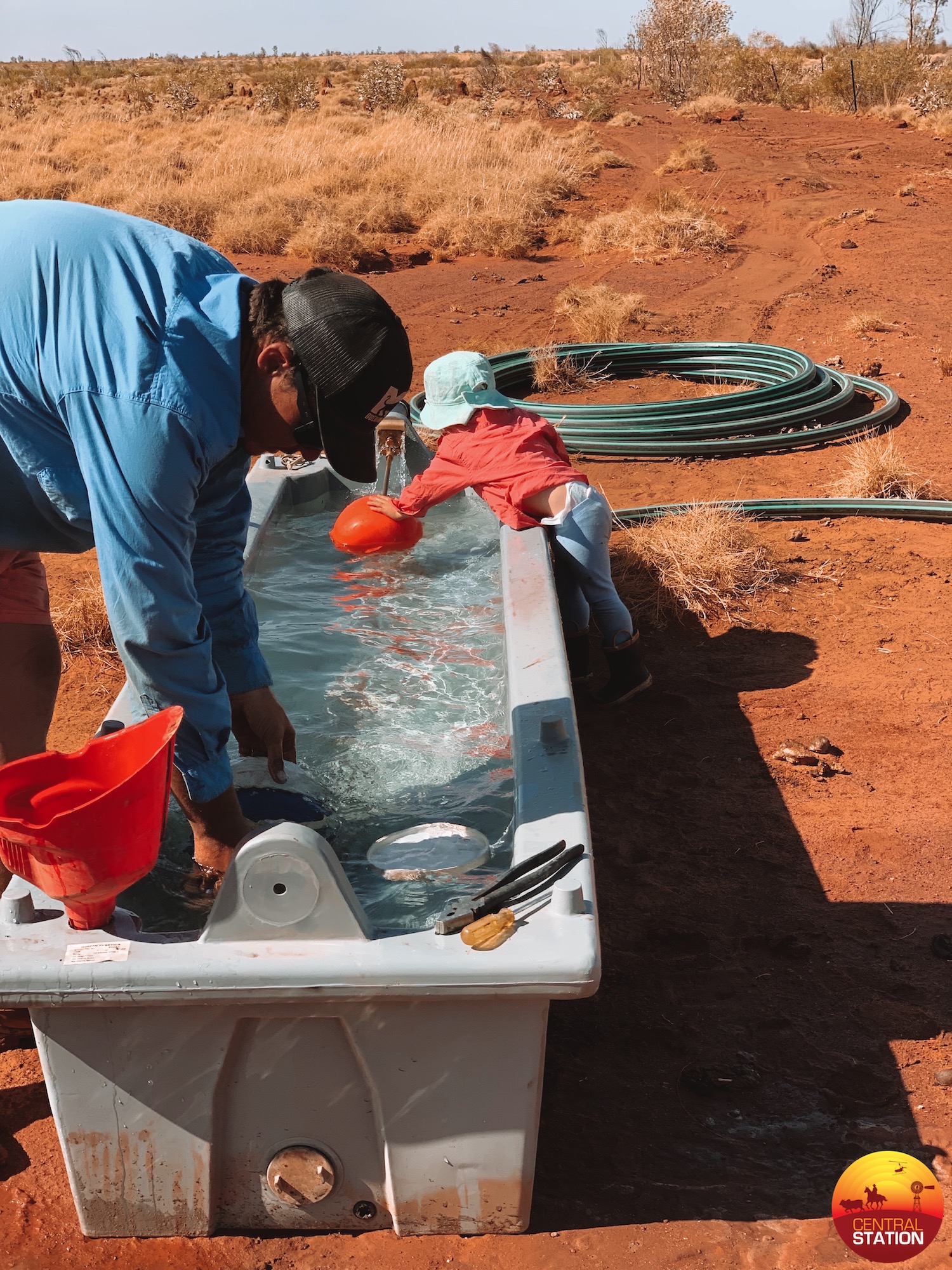 Plumbing in troughs with our little offsider.

The next hurdle was the movement of cattle. The dams in the Swamp paddock were almost dry and it was time to relocate cattle to ensure they had sufficient water available at all times. We had a bore in the paddock next door, which we quickly equipped with a tank and a trough, running it into the Swamp paddock under the fence.

Timing was of the essence as it was hot, 48 degrees hot, which meant to ensure the cattle didn’t get too hot in the movement we went early morning, trying to jag it so they had just had a drink and it was cool enough to get a decent amount of ground covered before it warmed up for the day. This particular move should have been straight forward; we were simply taking a cut of the cattle and putting them onto a new trough full of clean water, good in theory. The 300 odd head of cattle walked without a problem to the new trough where we held them till they were drinking and seemingly happy with the new area. We headed back to the homestead happy with the way things went.

The next morning we went for a dam and bore check with some more lick for that side of the property. Pulling in to check the new trough on the way through, there was not an animal in sight, the trough was full and clean so we kept heading into the paddock. Driving past the first of the dry dams there was a mob of 50, being not all that far from the new trough it was concerning but not a complete failure; they may walk back to the trough when they need to drink. Continuing onto the next dam which was around where we had taken the cut of cattle, there they were the other 250 head which had come all the way back to a dry dam quite a distance from the new trough.

It was time for plan B. We had to move them again this time into a different paddock where there was a bore, a dam and plenty of water. Lesson learnt, they clearly liked their home more than fresh water. It was a win, they had water and they weren’t looking to head back to the dry dams. This situation identified the importance of constant checks in a bad season; literally overnight things went from appearing to be under control to having a mob of cattle about to be in trouble.

We had our first storm on 30th December 2019 with 28mm falling around Bulka. This was a good start but we were definitely hoping we would be seeing more than this in the months to come. January and February gave us 150mm for the two months which put some good amounts of rain in the dams and had us in the clear for a while. We didn’t have any rain in February from the 6th till the 29th and things were starting to look dry again and all we could think about was the tough year it may be ahead. 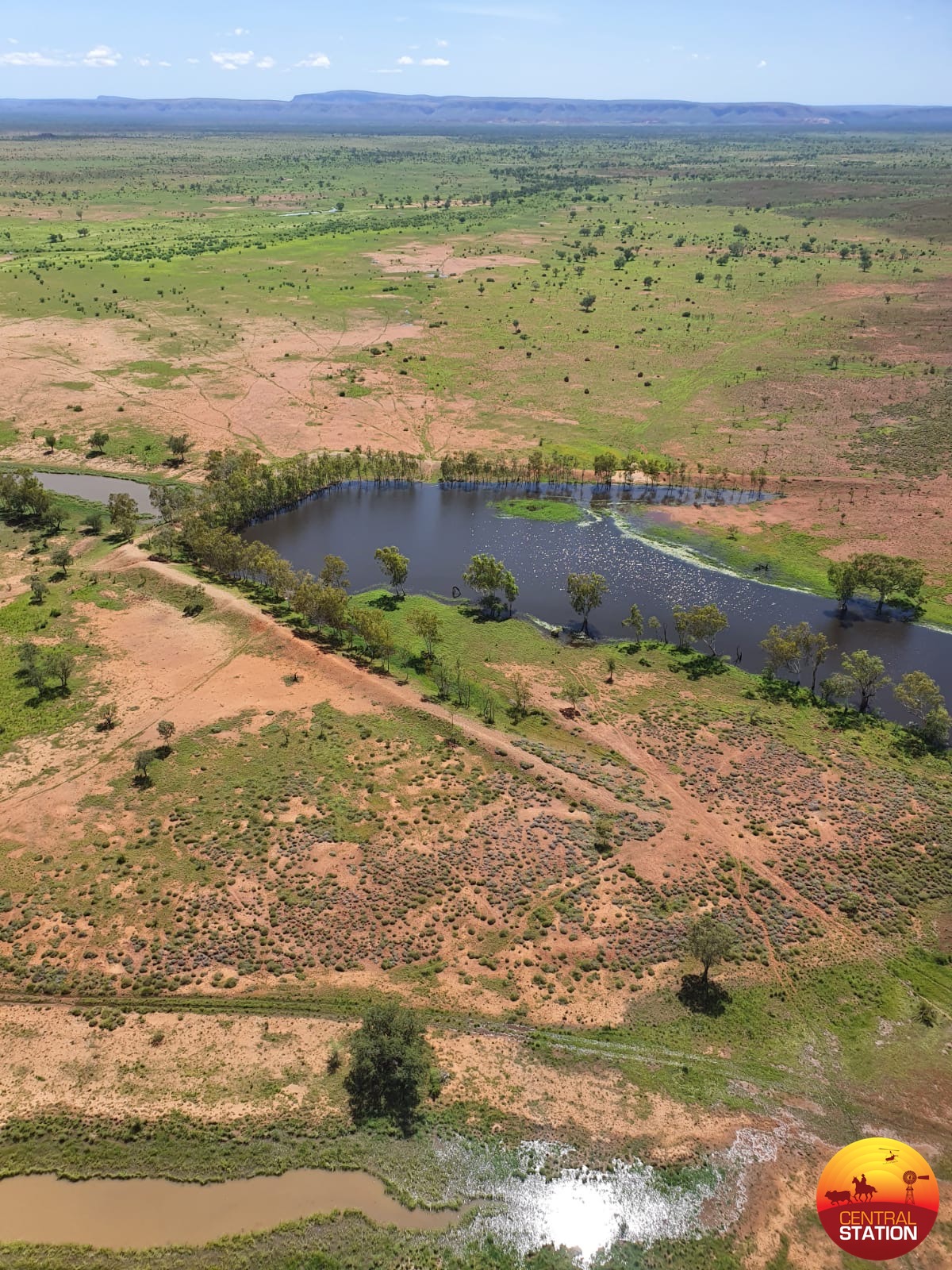 Most of the dams were looking good after the first little bit of rain.

After making landfall in the Gulf of Carpentaria on February 24th, ex–tropical cyclone Esther appeared to be making her way across to the Western Australian coast. We didn’t want to get too hopeful but as it was making its way over the north of us we were getting a few showers. It was then predicted to take a U-turn before getting to Broome, it would be travelling straight back across the Kimberley and we looked to be right in the path of the cyclone.

Had the weather forecaster got it right this time?

Yes they had. It brought us a welcoming 154mm of rain, filled the dams that were yet to get enough rain and made the Christmas creek flow unbelievably high.

Finally we could breathe. 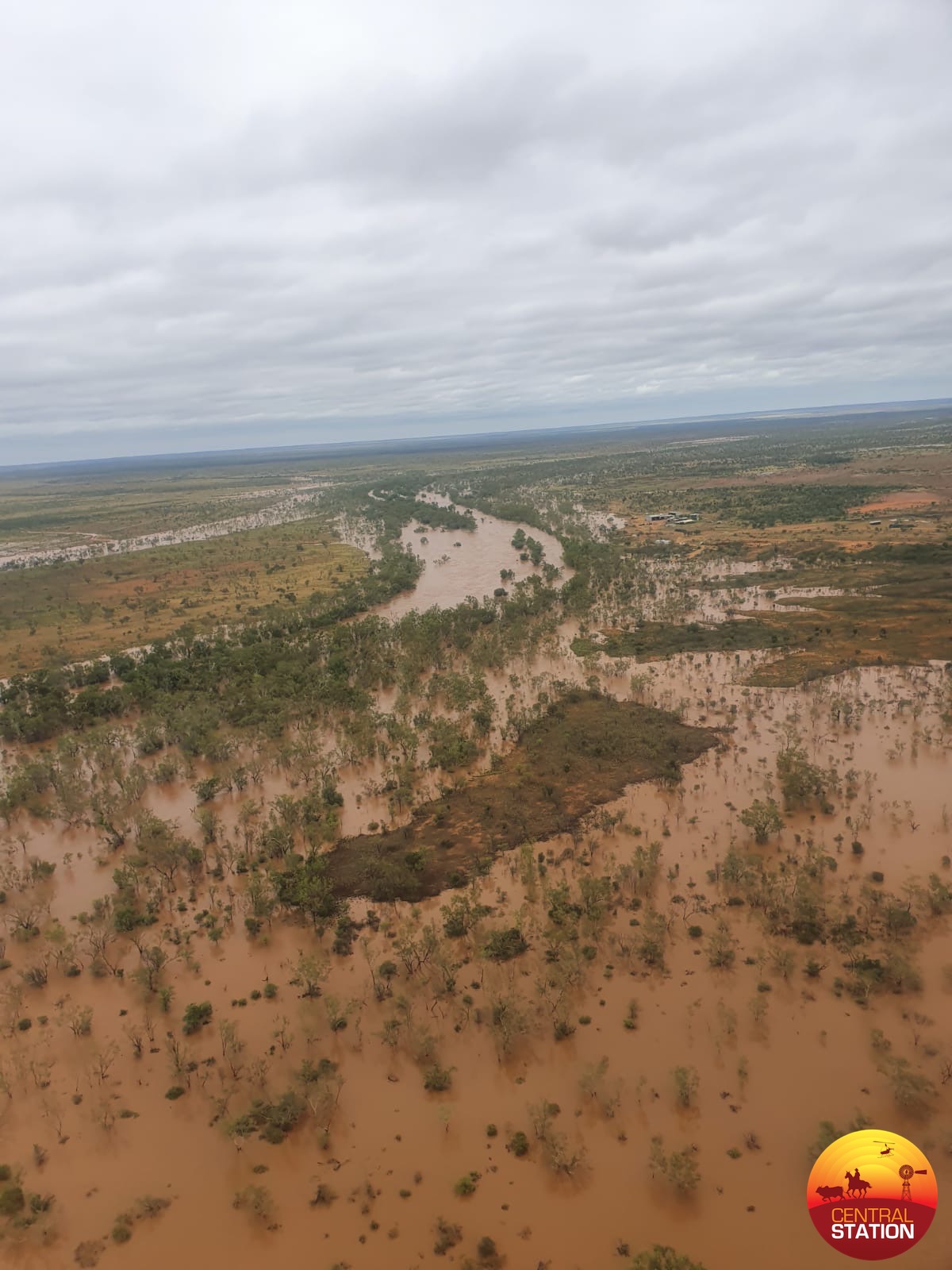 Christmas Creek overflowing after 154mm of rain. It got concerning and close to the homestead. 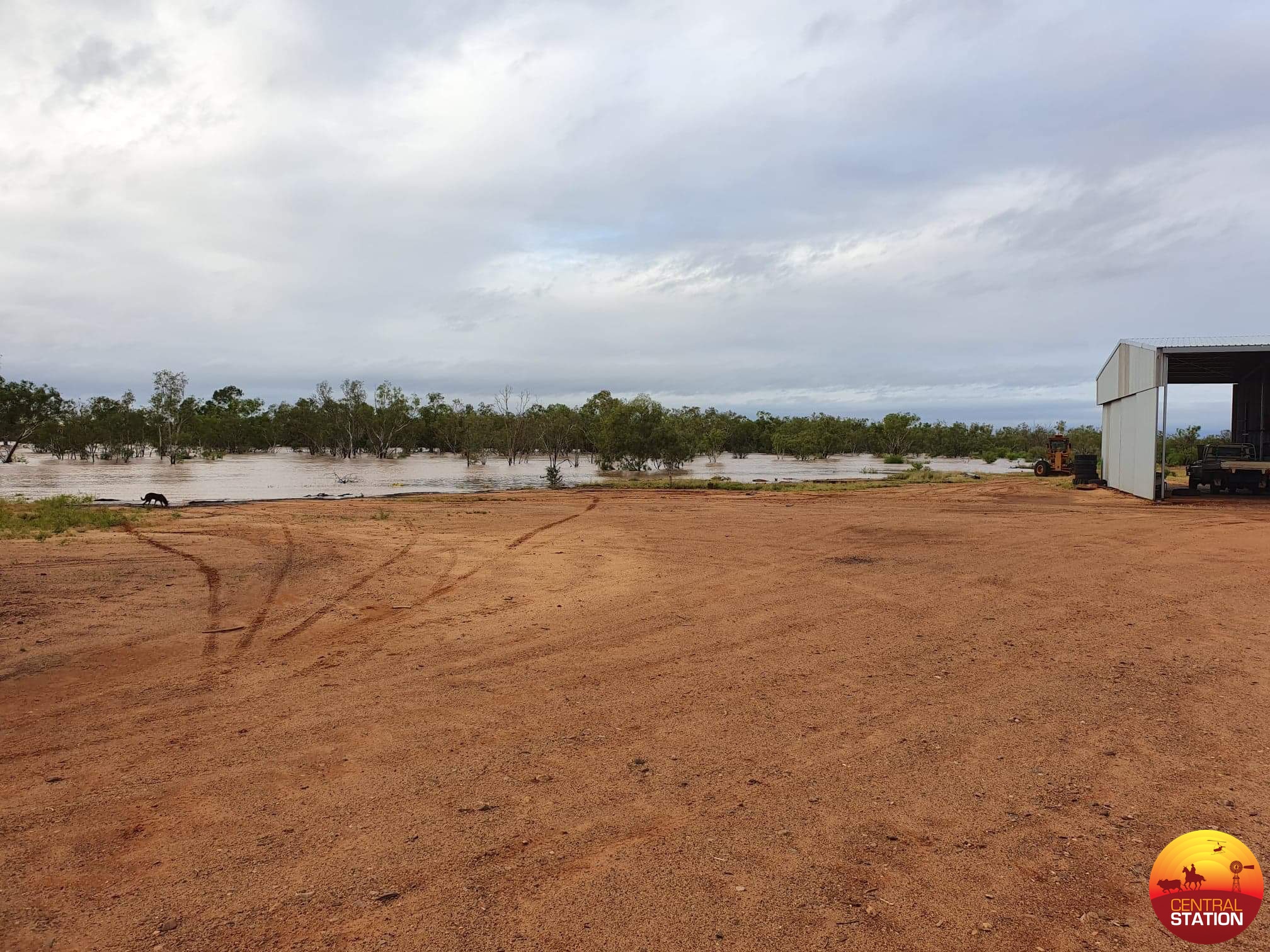 The workshop and proximity of Christmas Creek to the homestead.

< Things I miss about northern Australia (and some things I don’t) > Whoa, boy!