On the 10th of August 2018 I started my journey as a governess. A governess is someone who helps out in the schoolroom and supervises the children’s learning. The kids have teachers who are based at the School of the Air for that area but as a governess you are expected to keep them on task and help them to get through their workbooks. It had always been a dream of mine to be a Govie (governess) but everywhere I looked or applied for wanted someone who had experience. One night my mum tagged me in a Facebook post.

‘Is there anyone out there who wants to come and help out in the school room while we finish off mustering?’ As soon as I saw the post I immediately messaged Lindsay. I’m not sure she expected a response so quickly as she queried me as to why I would want to come up and help in the schoolroom with no pay, but she would pay for my flights and food and board was covered while I was there. I explained that I needed experience and before I knew it, I was on a plane heading to Port Hedland to start work at Mallina Station. When I finally arrived, I was nervous as Lindsay couldn’t get into town and her husband was picking me up from the airport. She told me not to be scared and that he just looks scary but is actually just a big teddy bear when you get to know him. That didn’t really help my anxiety about starting a new job in a new place. Sure enough he was tall and scary looking but once we got talking all the nerves went away.

We left Port Hedland and headed to the station, it was dark when I arrived, so I didn’t get to see much as we came in. I was taken to the main house for dinner and to meet the rest of the crew and the children I would be teaching the next day. I still remember meeting Lindsay for the first time, I was a little bit tipsy because the German mechanic had been feeding me some liquid courage (beer) once we were at Mallina. After dinner I was taken and dropped off at the quarters to unpack and get ready for the next day. 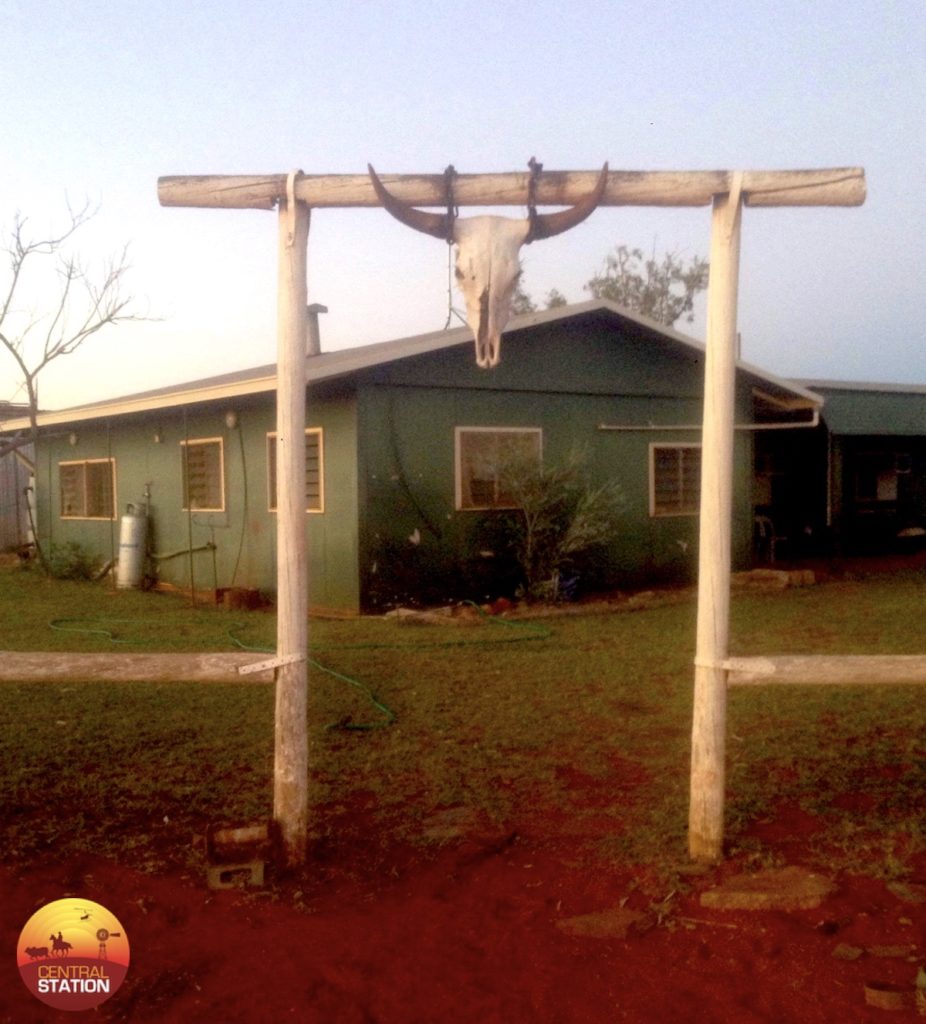 The next morning when I woke up and got dressed, headed outside and was shocked…. I was expecting to see cows everywhere but there literally wasn’t a cow in sight. There was so much space around me, the quarters are a good 200 meters away from the homestead. I had grown up on farm interstate and my experience with cows stemmed from having to chase them out of our chook pen as kids because they had broken a fence again. We were surrounded by fences and paddocks and our livestock was just there, within sight most of the time. After living in the city most of my life I was never taught much about the cattle industry and station life. A lot of my assumptions came from Facebook photos or the internet when doing some research. I didn’t realize that cattle stations for the most part literally have acres and acres for their cattle to roam freely. The cattle hung around under the trees on the opposite side of the house fence and there were even a couple of old pets that would let you pat and scratch them and they would try to lick your face. 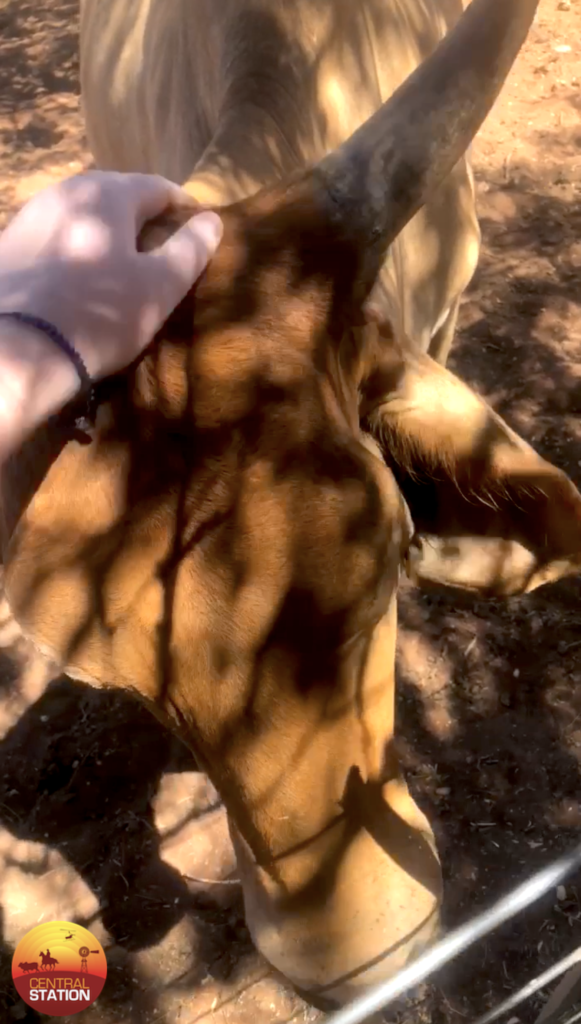 Giving Purple, a pet from previous years, a pat.

I was up here to help out in the schoolroom so that Lindsay could keep mustering. Mustering is the one time of the year the cattle are bought in to the yards to be checked over and given vaccination injections or are marked and tagged in the case of calves or cattle that have been missed in previous musters. On the weekends I was able to go out with the other crew and go mustering or work in the yards which was amazing fun. I did seem to nap a bit as the buggy tailed slowly along after the cattle as we walked them to the yards but Lindsay said I didn’t snore so… all good. They were much longer days than I was used to.

After just two short weeks of being at Mallina station it was school holidays and time for me to head home. The weekend that I was heading home was Pannawonica rodeo and we decided to go with the crew and stay the night. I got to meet the rest of the workers (those from other stations that are owned by the same people) and I spent my last night having a ball. The other crew members and friends of the crew were so welcoming and fun to be around. We all camped together on the rodeo grounds and spent hours at the bar watching the rodeo and then dancing to the band.

On Sunday morning it was time to keep heading towards Perth. After saying goodbye to the kids and their mum we were ready to head off. Lindsay and I had previously spoken about me coming back to work in a paid position as a governess. I had decided to maybe start in the new year, it was a big decision to shift, I still had a room in a share house near Mandurah. I didn’t think I was quite ready to make that jump yet. Just before we left, I decided that I didn’t need to wait until the next year. I could start in term four and Lindsay was happy for me to start then. Just like that I hooked myself my dream job as a Governess.

Living at Mallina Station has been amazing so far and I have learnt to adjust to many different things. The one thing I still struggle with is my worst fear…FROGS! While these frogs are smaller than their tree frog cousins that I have encountered while visiting my Mum in Fitzroy Crossing, they are still just as scary. I can’t stand the way they move and am petrified of one jumping onto me. I have learnt many different ways to try and avoid them such as getting a worker to check the toilet before I pee or if I have to, I just go out the back of the quarters to do a bushy (bush wee). I was managing my frog problem okay until Cyclone Veronica came through and dropped 600ml of rain on us. Suddenly all of the painted frogs came out from the ground and seemed to be everywhere that I needed to be.

The school room has an ensuite and a bedroom in the same building, so we use that bathroom during school hours. During that week after the cyclone I swear I needed to go to the toilet every 10 minutes, so I needed to come up with a plan to get the frogs out without touching them. The frogs live in the cistern and in the drains and I am paranoid about one jumping on me while I am using the toilet. I thought about it for a couple days and came up with the idea that if Corbin (the young boy I look after) removed the frogs for me I would pay him $1 per frog that he removed.

This was a fantastic idea until he was getting more than 2 frogs a day and was searching all through the bathroom to find more to make the extra pocket money. Thank goodness the frogs have calmed down now and buried themselves again, my bank balance and I are both thankful. I think I need to put the price down while I can… maybe 20c per frog. I am so grateful for the kids for helping me out even though Ella is just as scared as I am of them, she just huddles up to me in the opposite end of the school room and reassures me that it will be fine while Corbin defrogs the place for us. 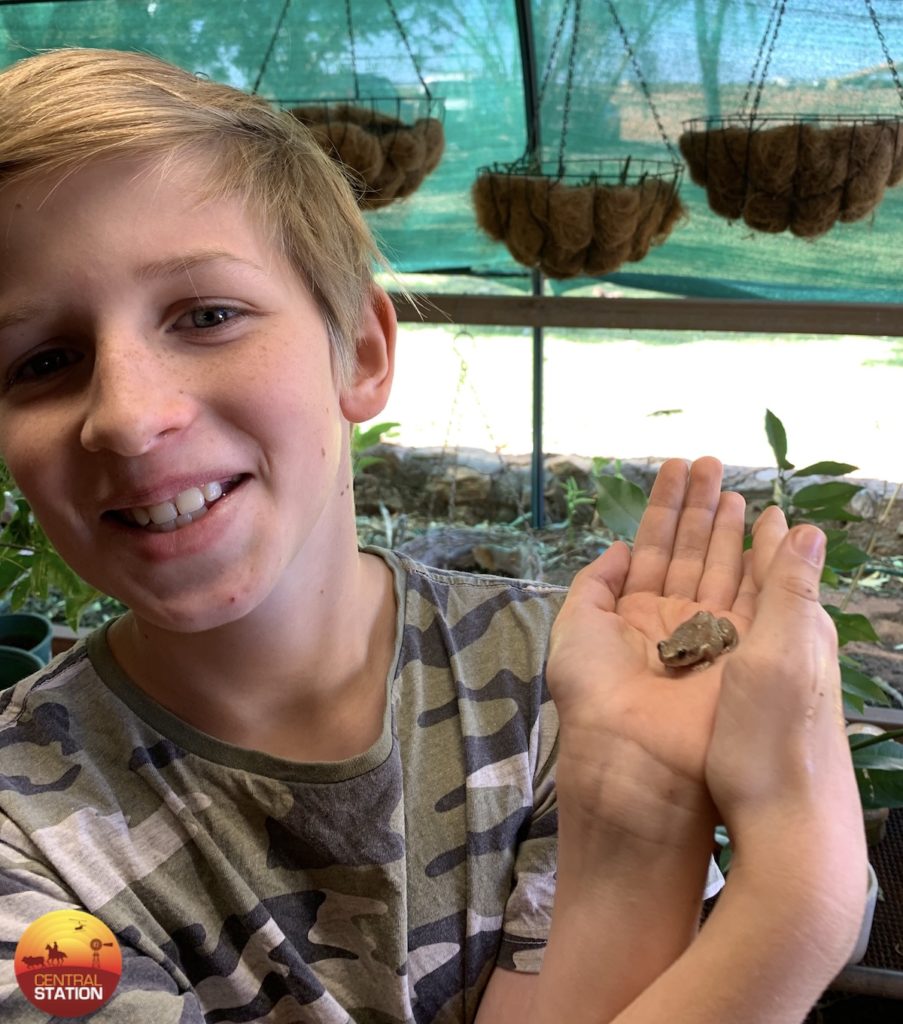 It’s been an amazing journey so far being a governess and I am glad that I get to also experience a bit of station life during mustering times or while the kids are at school camps. It was definitely a big change for me to leave my friends and share house in the city and move to the Pilbara, but I have made many new friends up here and can still go down South to visit people during the school holidays. If the opportunity arises, I would urge anyone looking for a lifestyle change like this to jump at it without hesitation. I’ve not looked back since I got on that first flight. 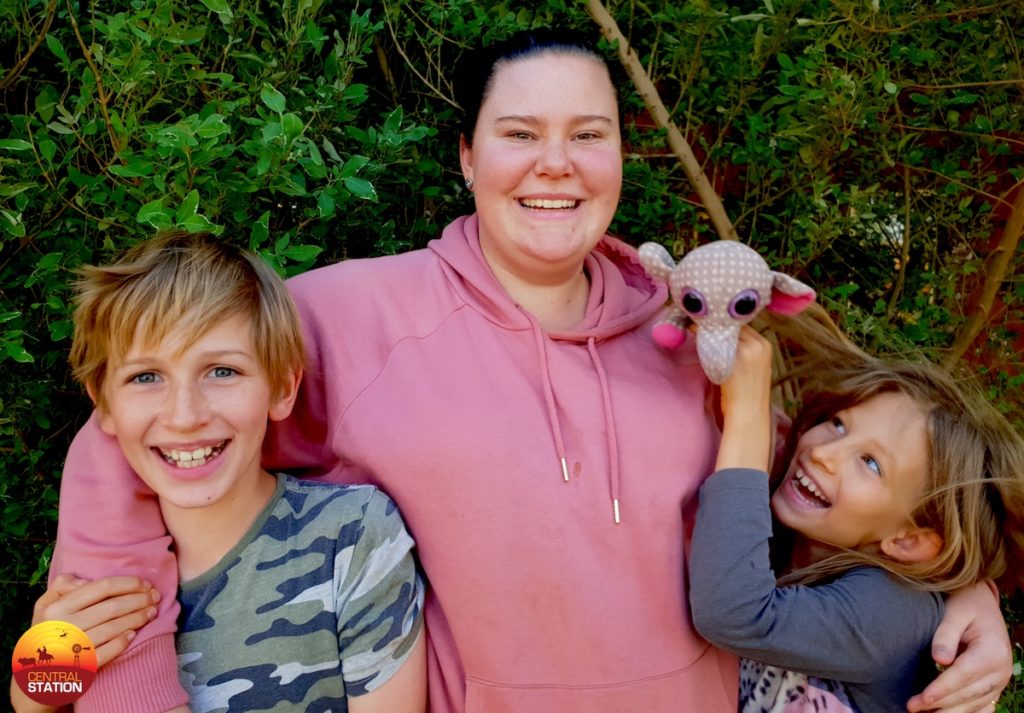 < On the other side of the desk > How rough are ringers?