How dangerous is a chicken?

On a scale of one to ten, how dangerous is a chicken?

I mean, compared to the feral bulls, snakes, crocodiles, wild cattle and dingoes that live in the Kimberley, I wouldn’t have thought chickens could be any worse than a 3… and it’d have to be a pretty mean looking chicken to score that high.

But then again, I never thought garden sprinklers were very dangerous either…

T’was a sunny Friday in September. After mustering solidly for two weeks the whole crew had the day off, and we decided to make the most of it by going into Halls Creek (100 km from Margaret River Station) for a pub feed, pool swim and IGA splurge (the closest thing to retail therapy you get out here!)

All went ‘swimmingly’ and even though the fellas would have happily stayed at the pub all afternoon, there were stores to collect and packing to do before going back out on camp the next week.

When we got home Jim, the manager’s four-year-old son, decided he wanted to catch one of the chickens in the backyard – the smallest one – Tinkerbell. Well, after being carried around for a few minutes, Tinkerbell must’ve decided she’d had enough and fluttered out of Jim’s little hands and needless to say, Jim wasn’t impressed. He took off after his small, feathered friend however Tinkerbell had the legs on Jim and darted out of reach like a scrub bull heading for the timber. Jim pulled up, his eyes began to well up with tears, his bottom lip quivered and I decided to take immediate action, because nobody wants to see a 4 year old cry – especially when the solution is as easy as catching a tiny chook… or so I thought.

I took off across the lawn after Tinkerbell, with the rest of the crew laughing and cheering on the first ever Kimberley Chicken muster-er (yours truly) and just as I hit top speed – the sprinkler hit me.

I’d been so focused on catching this bloody chook that I didn’t see the sprinkler until I’d run straight into it – a long, skinny metal tap, attached to a pipe – which my right arm hit at full throttle!

I doubled back and straightened up. A white hot pain shot through my bicep but I didn’t look at it – assuming I’d just lost a little skin and would develop a hectic bruise to show off at the next rodeo. I looked up with a sheepish grin, expecting to see the crew in hysterical laughter, but no-one was laughing. In fact, everyone looked like they’d just been told there’d be no more beer for the rest of the season!

I was momentarily disappointed until I looked down and realised my feet and legs were covered in blood.

Then I looked at my arm and realised I was the sprinkler and it wasn’t pretty. There was a gaping hole in my arm and it was pumping blood all over me and our lovely manacured lawn. I’m no medical expert but even I knew this required more than a bandaid and beer to fix.

Hiliary, our beautiful govie ran over, ripped her shirt off, like something out of McCleod’s Daughters, and wrapped it round my arm to stem the bleeding. My bosses were running around, calling ambulances, packing bags, and calling for the boys to unload the ute, ready for take-off.

Jim was still pretty upset that no-one had managed to catch his beloved chicken, so the other jillaroo, ‘Rabbit’ whisked him away and the fellas just stood there, looking at me with puzzled horror – presumably thinking ‘we’ll stick to catching bulls thanks!’

Even the station dog plodded over to give me a concerned lick but that wasn’t really what I needed as I lay there wondering if this was the end of my station career/life!

Soon enough, I was lifted into the ute and sped to Halls Creek by my boss, with the govie in the back, still holding my arm up, in a now blood soaked shirt and telling me it’d be a great story to tell in years to come. All I know is It wasn’t as enjoyable as the first trip to Halls creek that day, but it was definitely a lot quicker!

Arriving at the tiny Halls Creek hospital, I was put on every pain killer they had available and told I’d probably be home that night after a quick stitch up job. Then the doctor realised it was a bit out of his league and I was promptly flown to Broome hospital by the Royal Flying Doctor Service.

I wish my first flight on a private jet had been a little more enjoyable – but here I was loaded with pain killers at 2:30am with a hole in my arm the size of a handball and blood still all over my feet! The rest of this yarn gets pretty medical and boring but the short story is that I was temporarily stitched up in Broome and then flown down to Royal Perth Hospital – now practically a ‘frequent flyer’ with the RFDS – where I was wheeled into emergency surgery the next day. They by-passed my busted artery with a vein from my leg and 38 stitches later, I was good to go again. After a lot of worried calls from Mum I headed home to Margaret River where they welcomed me back with hugs, cheese platters and a few too many chicken jokes/songs (Go listen to ‘Sic em’ on a Chicken’ by Zac Brown – and you’ll get an idea of what I had to put up with).

After a month of light duties, I’m now back to mustering, yard work and loading trucks however I keep my distance from anything that looks remotely like a chicken or sprinkler – only approaching either when I have to… and with great caution. I ran over a sprinkler the other day in the tractor (accidentally) whilst spreading sand so at least I’m even with something!

The moral to this long-winded tale is this: No matter how good you think you are, it’s never the obviously dangerous things that get you up here… so keep your eyes open and always expect the unexpected, especially if it has feathers. 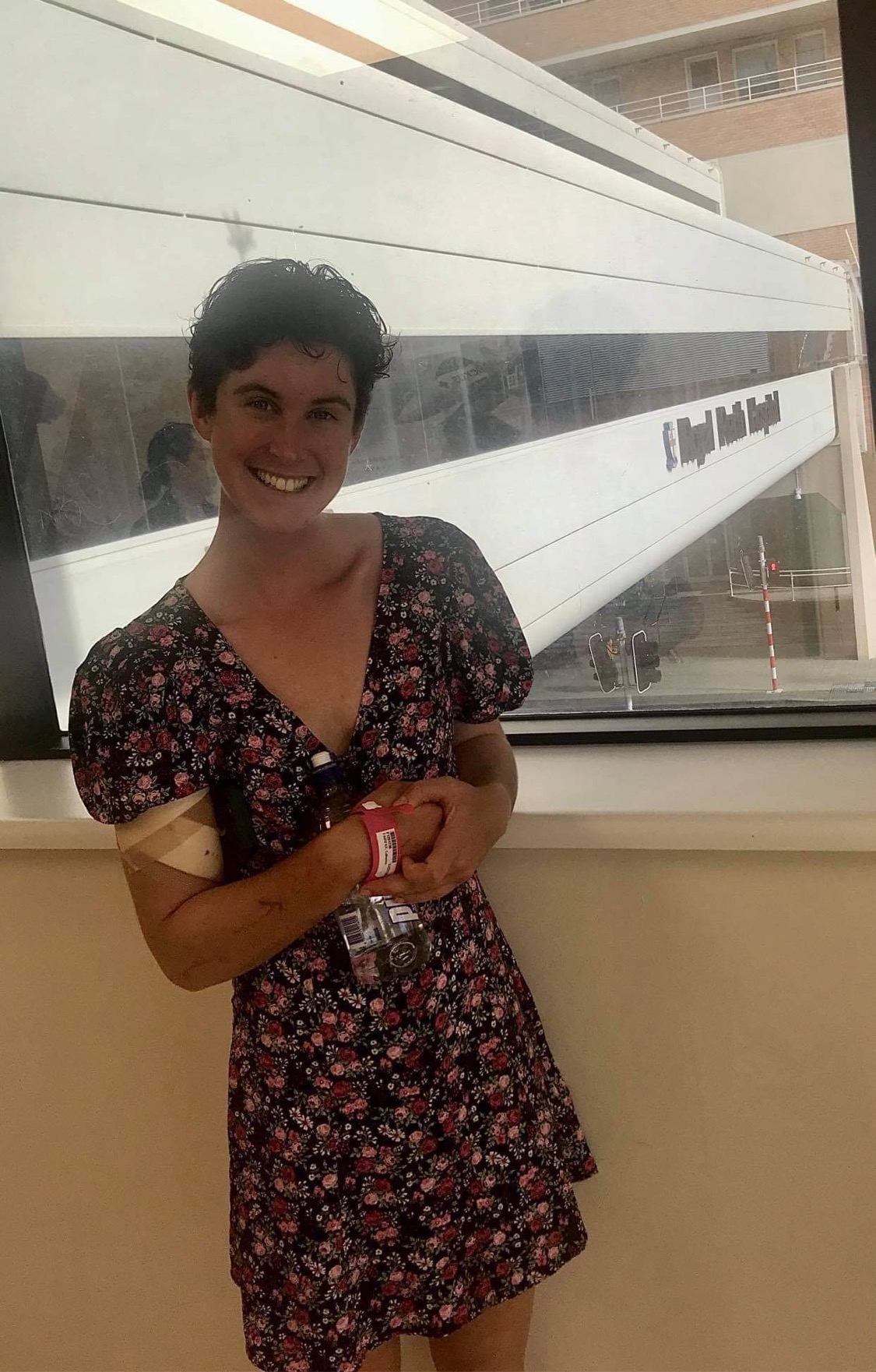 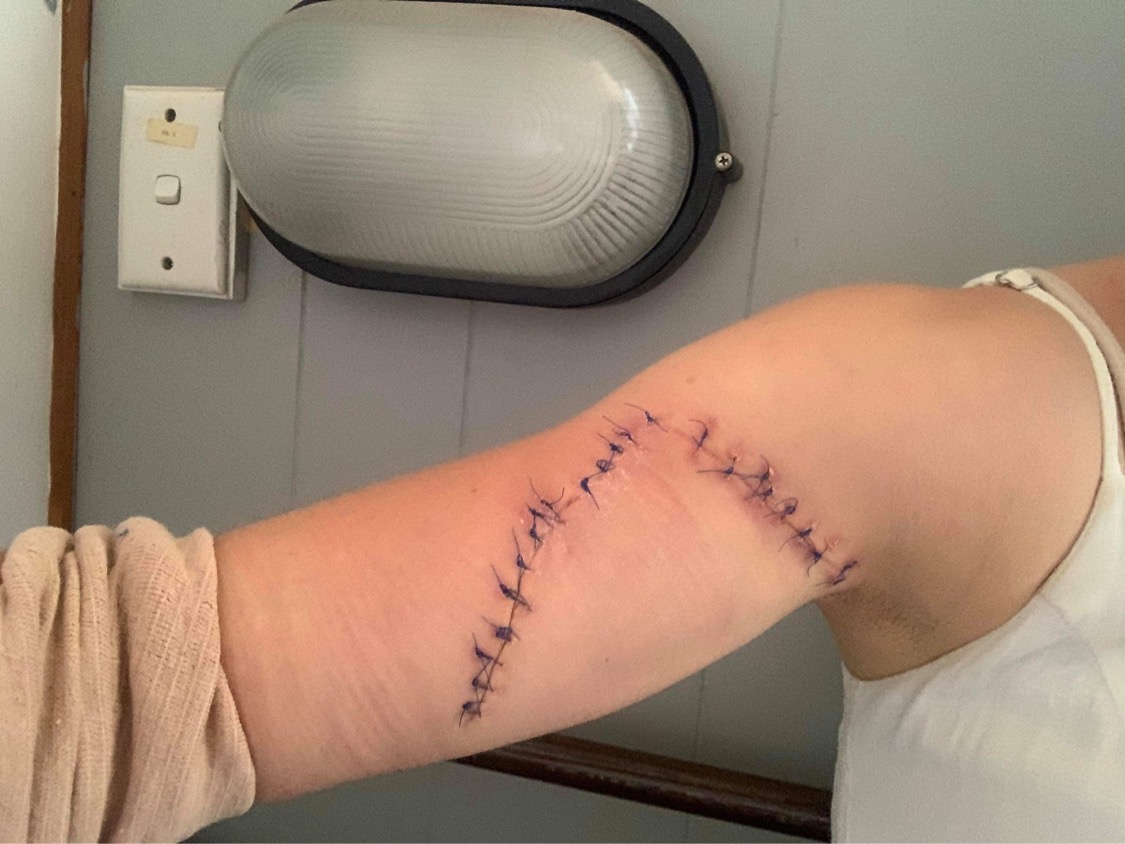 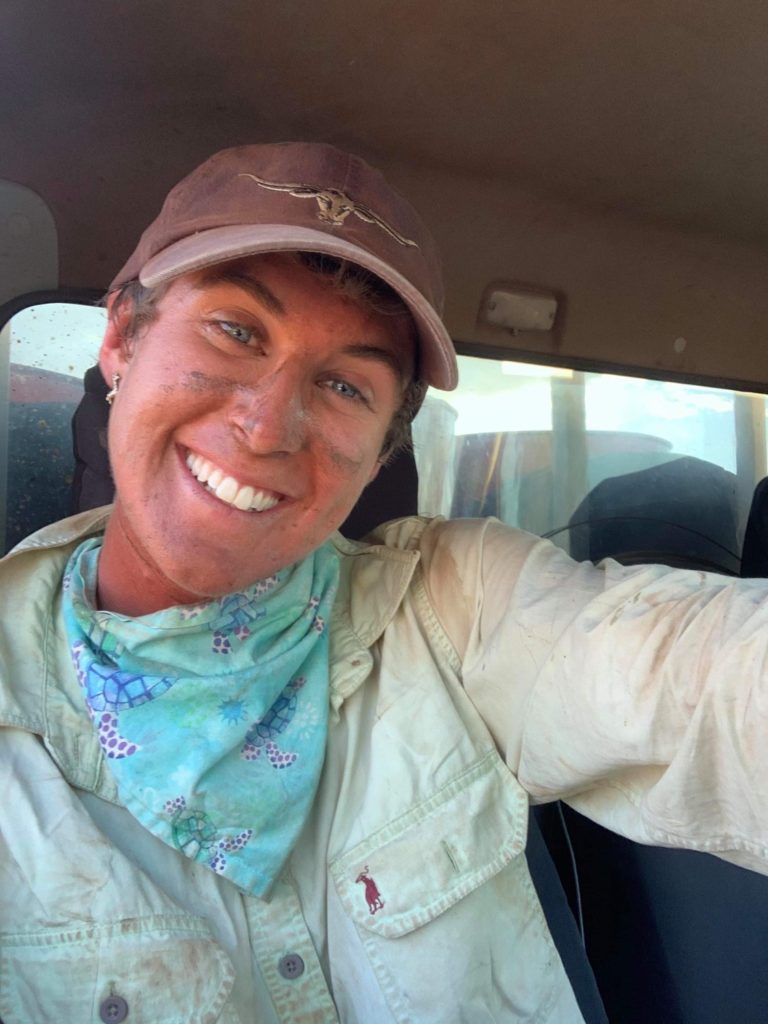