You might remember a story in the media from about 10 years ago. 18 teenage girls from the same high school in Massachusetts, USA, became pregnant at the same time.

The story goes that they planned their pregnancies after making a “pregnancy pact”. They wanted their kids to grow up together, so they got pregnant around the same time to ensure they’d be the same age etc.

The story made international headlines and inspired episodes of the television series Law and Order, Bones, as well as a documentary and several movies.

Well, I don’t know exactly what’s going on, and I’m no conspiracy theorist (ok, maybe a little) but I suspect a group of women in northern Australia have made a similar pact.

This is because from September 2019 to May 2020, I can count 20 babies being born into the pastoral industry between the east Pilbara region and Katherine, NT. Yes, I said TWENTY! And these are just the babies I know of in my social circle…

Considering we all work in the cattle industry, something fishy is definitely going on here.

It’s a mixture of first and second-time mums, and what’s even more shady is that most of the second time mum’s first children were born around the same time too.

Before all of this came about, I thought the first crop of children (born in 2017-18) was just some good old-fashioned matchmaking. The two little boys in the West Kimberley could grow up and date the two little girls on their neighbouring stations. There were another two boys around the same age in the Pilbara, and low and behold two more girls not too far down the road.

I’ve been trying to rack my brains for ideas as to why everyone has gotten pregnant all of a sudden. And it’s not just the fact that they’re pregnant at the same time, but also that they are pregnant at this particular time…

2019 was a horribly dry year, and the lack of rain brought with it a lot of stress. I had (incorrectly) assumed that people were too busy running waters and weaning cattle to be making babies.

Clearly, I was wrong.

So… I’ve come up with a couple of (conspiracy) theories:

1. Run a baby-sitting syndicate: You know the old saying “Monkey-see, Monkey do?”. Well, I can pretty much guarantee each of these women have seen “calf daycares” in action on their station.

A “calf daycare” is where you spot one cow, or perhaps two, looking after half a dozen (or sometimes even more) calves while the other cows are off having a feed or a nap. It’s actually pretty cool when you’re out on a water run and spot one cow under a tree with five or six calves hanging around her.

Anyway, if cattle can do it, then why can’t humans? I’m imagining this would come in handy during campdrafts and rodeos, especially if the mothers want to have a turn competing. Rather than try and wrangle 20 dads (who are likely also to be competing) to watch the 20 babies, they can just pick one or two parents (whether it be a mum or dad) to watch all the kids in one of those baby cages (you know those little fenced off areas they put babies in?). Heck, if there’s going to be so many kids of the same age attending an event, the event may even run a creche! There’s power in numbers, I’m telling ya!

2. They’re sick of their friends with kids not being able to hang out: I mean, I can really understand this one as the token single, child-less one in the group. Long-gone are the days where we’d knock back a 6-pack and tear up the dance floor at the race meets or rodeos before stumbling back to our swags or sleeping on the back of a ute.

These days everyone has a four-wheel-drive wagon which hauls their caravan around to the rodeos and campdrafts. The social scene is found sitting outside the caravan eating pre-prepared food (no more trips to the dodgy food vans and canteens), and if you’re lucky there might be a grandparent around to watch the kids so the parents can head into the bar area for a few hours. I guess, if you can’t beat ‘em, you may as well join them!

3. To keep School of the Air Going: In late 2017 the WA government announced it would be closing down the WA School of the Air, in part due to dropping enrolments. It’s no big secret that enrolments have been dropping. Back in the ‘old days’, the managers weren’t the only ones with kids on the station – the head stockman was usually married with a wife and kids too. Maybe also the bore-runner. These days it’s surprising to find a head stockman over the age of 25, let alone with a wife or child!

After some intensive lobbying, the decision to close the School of the Air was reversed. However, you can never be too careful, and I suspect this mob are making plans so the excuse of “there aren’t enough students” can’t be used again!

4. Go on School Camps together: Assemblies and school camps aren’t exactly the most exciting times – come on, we can all admit that. But how much more fun would it be if you got to see all your friends at the same time? And … I dunno, maybe sneak a bottle of wine? Just kidding!

Living so isolated, opportunities to see your friends can be few and far between, so by having kids that go to school together, these lasses are basically guaranteeing annual catch-ups once their kids hit school age. Or… even better, if their governesses chaperone the kids to school camp, then the mums could have a girls’ weekend 😉

5. Improve chances of their kids dating: It’s one thing to imagine your kids hanging out in the sandpit together, or going to school camp together, but imagine if they started dating and ended up marrying each other? No one can really pick and choose who their kid marries (at least not in this culture), so what if your kid picks a dud? The husband or wife might be good value, but what if their parents are duds!? Those are the people you have to see at all the family functions for the rest of your life… Now just imagine if those people were your long-time friends. You’d be laughing.

6. Can’t afford to pay staff: The cattle industry is a marginal game – it’s all about reducing expenses and saving money where you can. We all know that kids are free labour. At the absolute minimum you only have to wait 4-5 years before they can start opening gates for you. Technically, you don’t have to pay them until they turn 15, so there’s a fair few years of half decent labour you can get on the cheap right there. It’s not my strongest theory, especially considering how much kids cost (don’t even get me started on boarding school, it makes me feel nauseas), but I’ll let you make up your own mind.

7. Revive the rodeo and camp-drafting circuit and social scene: We’ve all heard how towns in rural and regional Australia are ‘dying’ as young people pack up and move to the city. If I had a dollar for each time I heard the line “there’s just no young people about anymore, we used to have so many people and we’d be having BBQs and parties all the time!”, mate, I’d be buying my own station (or a Landcruiser… ok, probably a second-hand Hilux). Well, yes there are still plenty of young people about, but it’s quite a transient community – people come to the region for a few years and then they leave. In theory, hopefully all of these babies will stay in the region as young adults, and then there’ll be more people to not just organise events, but compete in them too.

8. My early weaning video is to blame: In April 2019 I uploaded a video to Facebook which was a parody of the Ariana Grande song “Breathin”. My version was called “Breeding” and the chorus went “just keep breeding and breeding and breeding”. It also gave instructions as to how to give a cow her best chance of getting in calf. I can confirm that five of the women in that video are indeed in this group of 20 pregnant women. I mean, I’m not taking all the credit, but I’m also saying that I haven’t received any thank you presents yet… (if/when you read this, I prefer Cadbury chocolate over Nestlé). 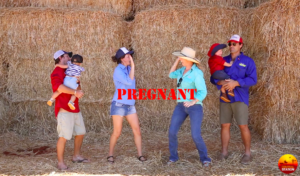 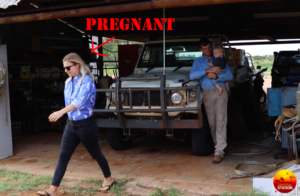 I used to love being an ‘honorary aunty’. I would go shopping for my ‘adopted’ nieces and nephews, and when I started learning to sew I couldn’t wait to start making little cowboy and cowgirl shirts. Well, those days are over now, I’m tapping out. I can’t afford it anymore! Between the first round and second round of kids, there’s just too many. So this is Aunty Steph, over and out.

< Sexual harrassment in the pastoral industry > Take a Chill Pill-bara