This may sound like just another city girl meets country boy love story but stay with me. Hopefully, it will be worth the read.

Five years ago, I was living in the city enjoying all the perks it had to offer. I had just returned from travelling Europe and was in search of a new teaching job.

I’d spent the first term of the school year travelling so there wasn’t an awful lot of jobs on offer. There was however, two jobs going at a small remote school in the Pilbara. Coincidently, my best friend who is also a teacher, was looking for a job too. We responded to an email that we received saying that we were interested in the advertised positions and within four hours they had arranged to pick up our cars and our furniture. Within a week we moved 1600km from the city, to a remote outback town with less than 200 people. I taught a total of 12 students in grades 2, 3 and 4.

A week into my remote teaching adventure, I met the local cowboy at the ANZAC Day dawn service. We briefly exchanged pleasantries before I took off to town with my friend as we were in desperate need of a decent coffee and some groceries. A quick Google search in the car (we didn’t have long before we lost phone signal) and I had all the information I needed to find said cowboy on Facebook. Obviously, I didn’t send him a friend request because that would have been way too creepy.

Fast forward to the end of the school term. I had reapplied for my position and was hoping to sign on for an additional three years. My contract came through on the last day of term, but I had already taken a job in Port Hedland, a rural mining town 200 kilometres away. Cam, the local cowboy, and I only saw each other a couple of times at the pub when I lived in Marble Bar. Clearly he wasn’t put off by all of my cringe-worthy questions about the station because not long after I’d moved to Hedland, he called me up to ask me on a date. Unbelievable. I mean, send a text like a normal person.

I had only planned on staying in Port Hedland long enough to work out my next move. I didn’t want to go home to where I grew up but I wasn’t sure where else to go. I half-heartedly applied for a few jobs over the next year, went to teach in Kenya for a couple of months and then returned to Port Hedland.

Eventually I decided to stop looking for a way out and made the small mining town home. Although I enjoyed going back to Marble Bar on weekends and school holidays, I was in no way in a rush to move to the station. I loved going on mill runs with Cam and hanging out in the yards (you’d usually find me perched up on a panel away from the dust) but station life wasn’t calling my name.

In 2017, we found out that we were expecting a baby. Cam and I had been together for almost 3 years but we were still living pretty separate lives because of the distance. He was busy managing the station and I was busy building my career in Hedland.

We tossed around a few different scenarios but in the end, we decided that it would be best for me to move to the station so that we could raise our baby together. At 35 weeks pregnant, I packed up my classroom and my house in Hedland and moved to Marble Bar. Cam and I moved into a hundred square metre transportable that was once his office block.

At the time Cam was busy mustering so 90% of the renovations hadn’t been done. We had no power (other than an extension cord coming from the outdoor laundry) or running water. The house stunk of glue from the new floors and paint. I cried and cried for the entire week that I was there, until it was time for me to head to my parent’s house, 1600km from the station.

Our nearest hospital is in Hedland but we chose to head down to the city and have our baby there. I wanted to have my family close at such an important time in our lives. My sister Ash is a midwife and we had planned for her to deliver our baby.

George was born in the middle of June, 2018. Although we hadn’t planned to start our family so soon, I wholeheartedly believe that this is what God had planned for us. We stayed with my parents for the first few weeks of George’s life while we got the hang of being parents and sorted out a few minor medical issues. Eventually Cam returned to the station ahead of us to “finish the renovations”. Long story short, the renovations weren’t completed on time but I returned home anyways.

Adjusting to life on the station wasn’t easy for me and it still isn’t. When I returned “home” with 6-week-old George, I was geographically isolated but I was also isolated from the day-to-day happenings that were going on around the station. I would ring Cam most days, asking him to come over to the house to lend me a hand with things I should have been able to do by myself. I didn’t recognise it at the time but looking back now, I realise how much I was struggling with my mental health.

For the first 18 months after George was born, I had access to the house I was allocated when I was teaching in Hedland. This served as my refuge when life on the station became too much for me to handle (which was often). I would spend days, sometimes weeks at the house with George, calling Cam crying when he wouldn’t sleep and begging him to come in and help me out.

I’m so grateful that Cam was so patient and supportive while I was trying to find my new normal. I wanted our family to be together more than anything but I wasn’t ready to let go of my old self.

When I was teaching I was making thousands of decisions during the day. After stopping work, I felt like there was something missing from my days. For a while I worked for the business in an administration type role but it didn’t make me any happier. I studied for five years to teach and never imagined doing anything else.

I didn’t feel like anyone really understood what I was going through. Cam’s family have been farming for generations and they can’t imagine doing anything else. Almost all of the other women I’ve met who are living on stations are there because they want to be there. They were either raised on a station or they were already working in the cattle industry when they met their partners.

I have been living on the station for over two years now and unfortunately, it hasn’t gotten much easier for me. My biggest struggle is the isolation. As the business grows, the number of people living here grows too (however, middle aged men aren’t the company I’m seeking).

I struggle to live so close to so many other people and feel powerless to do anything about it. I am very much an introvert. Before moving to that station, I lived by myself for years. I loved catching up with friends often, but really needed the down-time at home to recover after social events. Here, I can’t take the boys out to play on the lawn or put a load of washing on without bumping in to at least two other people.

I love that our boys will get to experience everything that the station and the outback has to offer, and that Cam is living his dream, however, this isn’t the life that I had ever imagined for myself. I fell in love with Cam and thought that in time, I could fall in love with the station too.

I struggle a lot with guilt, especially because I haven’t embraced station life like I thought I would. I am grateful for everything that Cam and his family have built here, but at the same time I feel guilty that it isn’t enough for me. Everyone here seems to be working towards a common goal and making sacrifices for the good of the family and the business, but I feel like I have already made too many sacrifices.

Somewhere along the way, I completely lost myself.

I love being a mother but that’s not all that I am. I am more than a mother and a farmer’s wife. I am also a teacher, a sister, an aunty, a daughter, a granddaughter, a friend and a Christian. I am grateful that technology helps me to be all of those things while I’m on the station, but it isn’t the same as being able to be physically present.

American psychiatrist Alexandra Sacks put it perfectly in her TED talk when she said “When a baby is born, so is a mother.” The moment your baby is born, your main purpose each day is to care for them. They are completely dependent on you to survive. When we become a mother, our whole life changes. Our bodies change, our hormones change, our relationships change, and we change. Being a mother is incredible, but it’s also physically, mentally and emotionally exhausting, repetitive and lonely.

When I began reading about matrescence, I began feeling less broken. I felt that it was okay to not be okay. I’m two years into the incredible journey that is motherhood and I’m still finding my way. For so long I felt like I needed to go back to work to be able to be myself, but I also felt a huge pull to be at home with George. I was torn between wanting to be a mother and wanting to be my old myself.

The more I read about matrescence, the more I realise how normal it is to feel this way. What I cannot seem to wrap my head around though, is why we don’t talk about it? Next time you’re catching up with your “mum friends” make sure you ask how they’re going, how they’re really going. Shout the word matrescence from the rooftops. Tell your partner, tell your family and tell your friends, even if they don’t have children. When I showed Cam the TED Talk by Alexandra Sacks, he had more of an understanding about what I was going to. Communication isn’t our strong suits so we decided to start seeing a counselor together and there is absolutely no shame in that.

I’m not sure what the future holds for me, or for my family but I guess that’s all part of the adventure that is life. Hopefully one day, we’ll build a bigger house on the station away from everyone else and have a house in town so that our family can enjoy the best of both worlds. For now, I’ll try my best to enjoy life in the slow lane with Cam and our two boys, George and Henry. 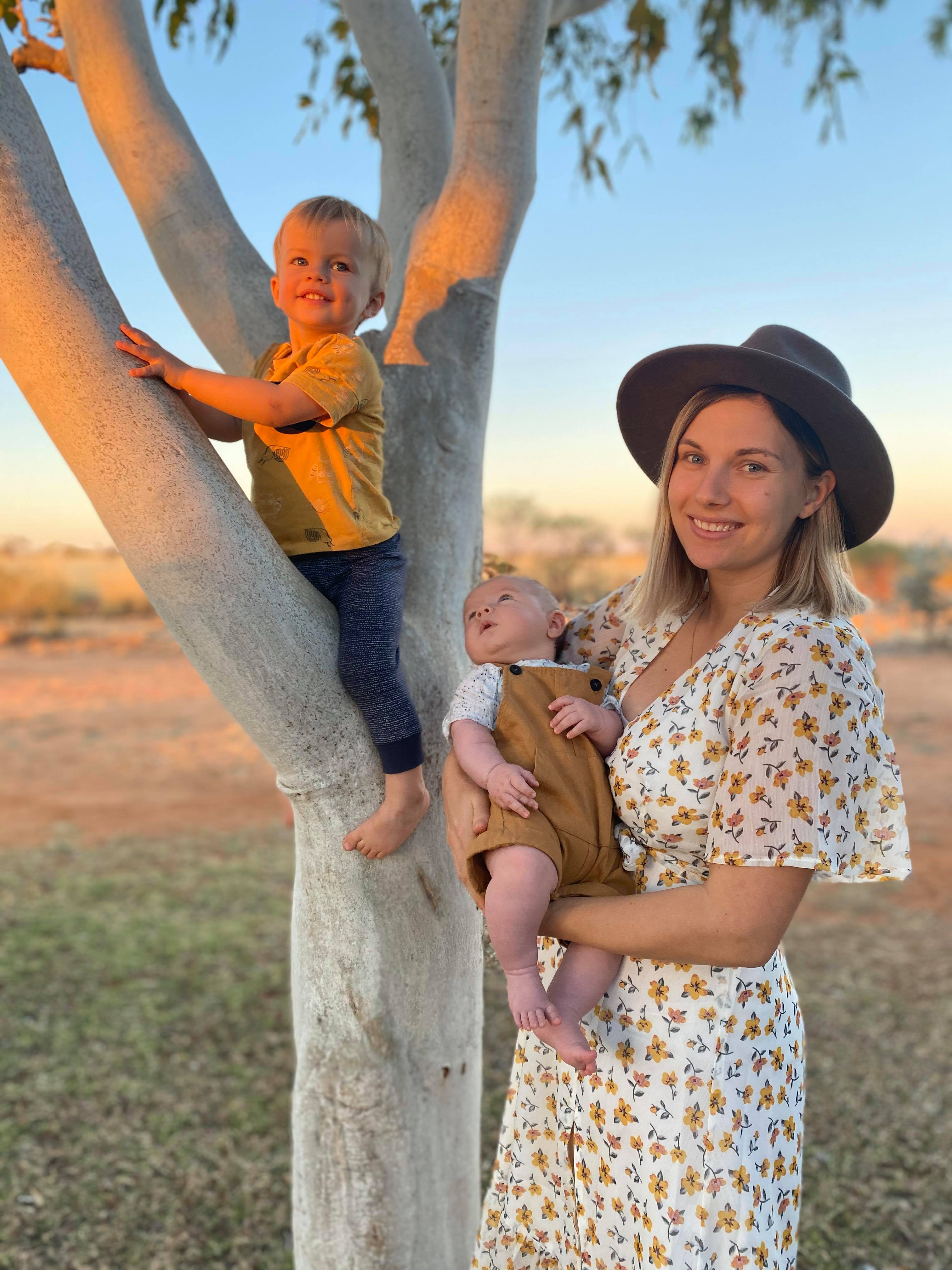 If you are experiencing difficulties, or know someone who is, help is available.