Generations of Innovation at Wirrealpa station

Public perception still believes that time somehow stopped for the everyday farmer and left us lagging behind, needing to catch-up. If growing up on Wirrealpa Station in South Australia has taught me one thing – it’s that the spirit of Australian innovation runs deep in our veins and it needs to be told – so this is my story…

I argue that there are many forms of innovation, technology is absolutely part of it, but so is strategic activities with a business mindset. In addition, there is a perception that farmers are not innovative and they are not moving with the times. There may be some truth to this when it comes to the adoption of farm software, however, in my experience, being a 5th generation grazier from Northern South Australia, farmers (well good farmers at least) are extremely innovative and have been for decades.

I only need to look at what I have seen (or learnt from my mother, father, uncles, aunties and grandparents) while growing up on the land. My family property, Wirrealpa Station, is a 400,000 acre sheep and cattle station situated in the northern Flinders Ranges (and including my relatives, our landholdings cover well over one million acres across SA and NSW). Wirrealpa, while large in size, is a grazing pastoral property which means it is low rainfall (under 200mm/year) and has a carrying capacity of 20,000 sheep equivalent (we run sheep and cattle).

In the 1950’s the business supported over 20 staff and their families, based at the homestead and on outstations. Everything was done on horseback, with over 40 horses. Building and maintaining fence lines, checking stock waters and mustering stock was all done on horseback.

These activities across 30 watering points, hundreds of kilometres of fence lines and mustering paddocks, some as large as 50,000 acres, you can only imagine how long it took to simply find the stock in the paddock, that alone drive them to stock handling yards. Everything took a huge amount of man and horse power and took forever! 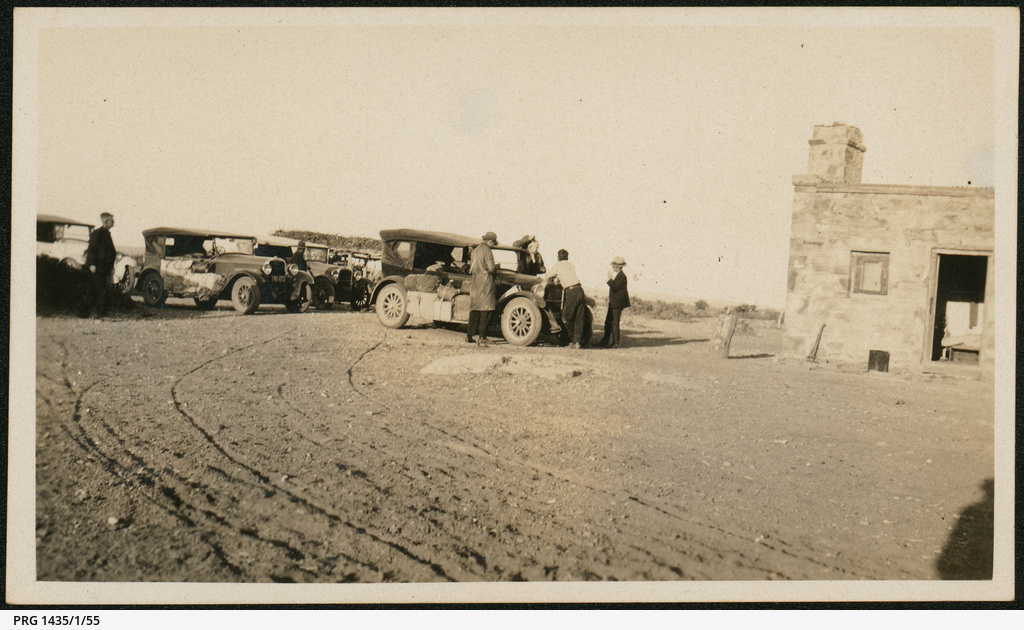 In the 60’s my grandparents bought their first motor vehicle, which meant that they could travel to the closest city, being Adelaide, in two full days of driving. Before this, the journey would be a week. This now meant that my father and his brothers could actually see the beach and go for a swim…once a year….

It also meant that stock waters could be checked without days on end on horseback and carrying out repairs and maintenance of equipment was infinitely easier and quicker.

Our fencing contractor ‘Blue’, a war veteran and champion woodchopper, who was 88 when he finished working for us, would spend weeks on end living in his caravan building hundreds of kilometres of fence lines. Splitting large paddocks into smaller ones strategically placed around watering points was key to drought proofing and efficient land utilisation. 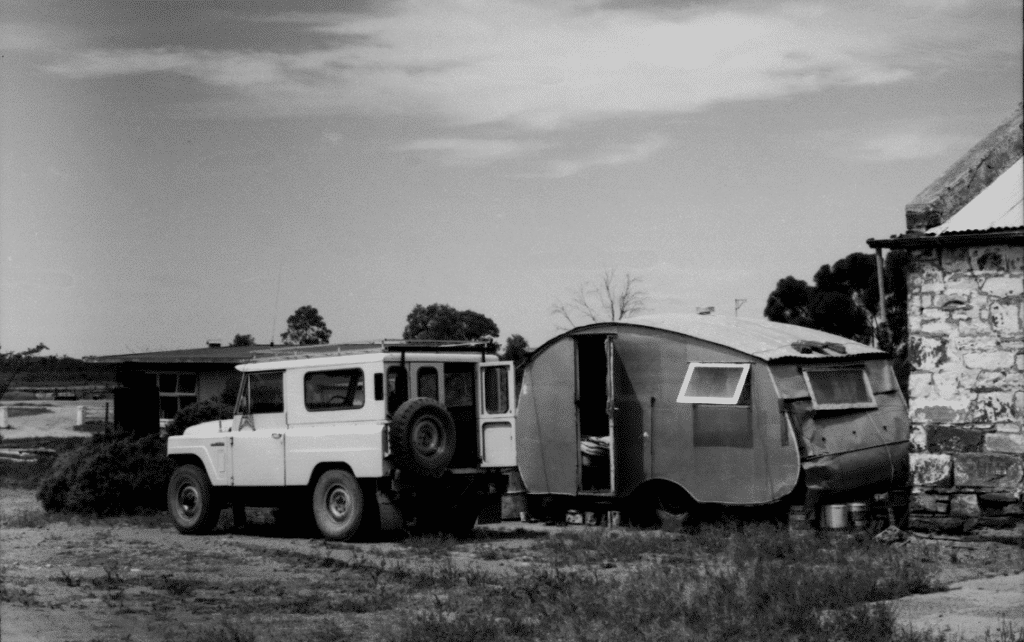 Blue’s Nissan Patrol and caravan that served as his home while building fence lines on Wirrealpa Station.

The thing about horses, aside from being slow and inefficient, is that they eat food even if you aren’t using them! Obvious I know, but motorbikes don’t! They only need fuel when you use them! Enter the rollout of motorbikes on the station.

A huge change in checking waters and mustering stock simply through motorbikes. You could now get to a paddock in hours rather than days, significantly reducing the time involved and the required number of staff.

By the 1970’s, staff was down to 5 and only a few horses as pets rather than work vehicles. 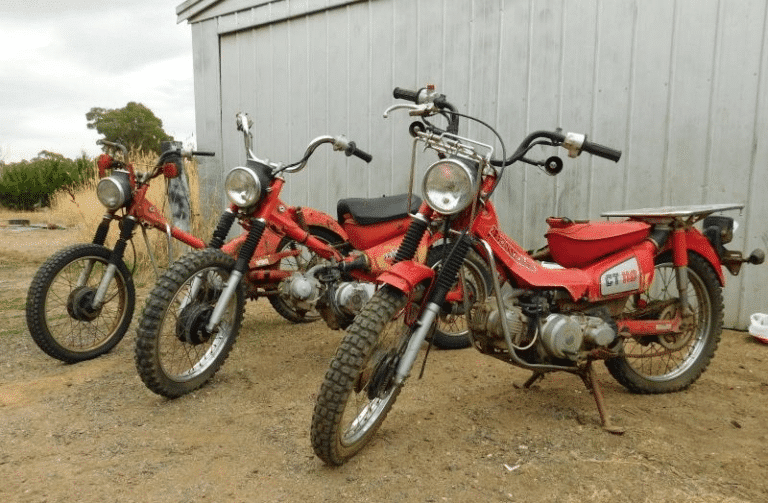 Postie bikes like the Honda CT 110 we used on farm.

In the early 80’s my parents married. My father is romantic one, and on their honeymoon Dad took Mum to something he had always wanted to see…the largest sheep sale in the country at Deniliquin! Very romantic for my mother I know! Dad’s other main purpose for the trip was to inspect and purchase the first Cessna 172 (a light aircraft). Aside from the memorable romantic honeymoon, the step change for the business was monumental.

With the Cessna on deck, what used to take two days to do a water run, now took 2 hours. In addition to pure time saving, the fact that we could now spot major issues such as broken windmills, busted tanks and troughs, find perishing stock, all had huge impacts on the overall bottom line of the business.

Compare mustering in the 1950’s to the 1980’s. A team of men and horses on the road for weeks, spending days in a single paddock wandering around looking for stock. Now with the Cessna, motorbikes and 2-way radios, stock can be spotted, gathered and taken to the destination in one day.

Switching gears on productivity improvements…as the wool market had collapsed in 1991 due to the guaranteed floor price together with Bob Hawke ceasing trade with China after the the Tiananmen Square massacre on 3 June 1989, and rabbits were still in plague proportions, one thought process was how do we do more with what we have?

The strategy was to reduce the huge losses of ground cover caused by the plague proportions of the pesky rabbit. Large investments were made to ‘rip’ rabbit warrens with bulldozers to try and reduce the impact on natural vegetation and biodiversity. These efforts were trumped with the introduction of the calisivirus in 1995. I still remember how quickly the virus hit and the instant decimation of every rabbit across our 400,000 Acres…that’s a lot of rabbits and the smell was notable! Very creepy and scary. Effective nonetheless. 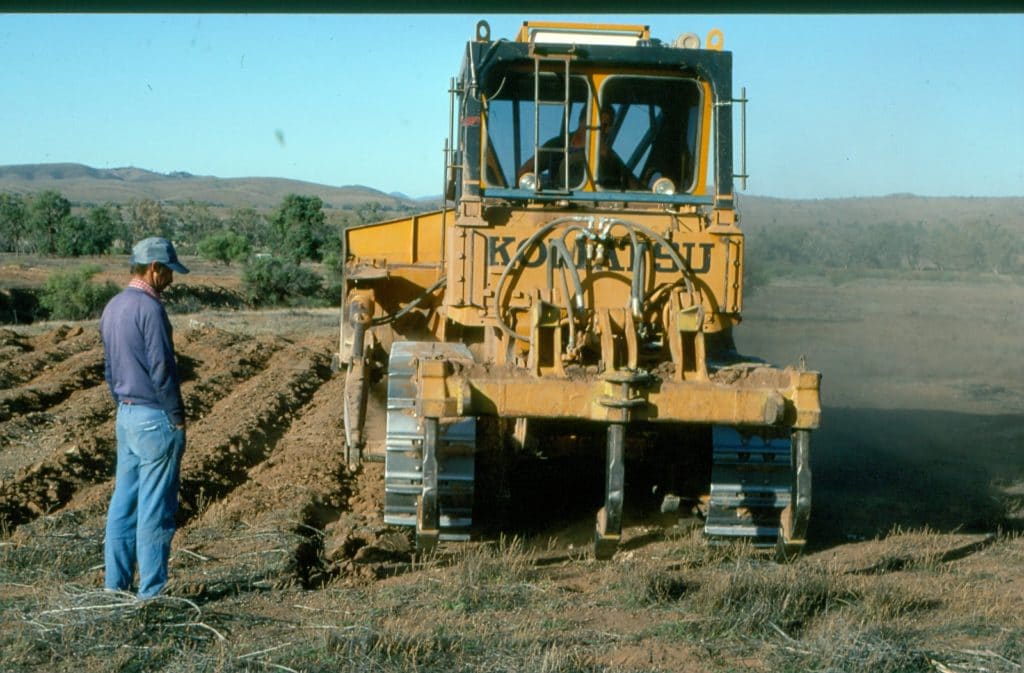 The drought had really started to take hold, which would last for 20+ years. How could we be smarter, more innovative and diversify with these challenging conditions and a large boarding school bill to pay every year?

Many operational practices were brought in, including removing a lot of contracting costs (shearing, crutching, lamb tailing), reducing staff and implementing three shearing events across two years. All of this meant we could reduce cost (albeit working harder), but also increase the wool cheque by 50% over three years. Investing in expensive infrastructure was not an option, nor was looking at other technologies.

During these times, there was not a fundamental shift in efficiencies through new technology. Just simply smarter business practices from an operational perspective, but still innovative. 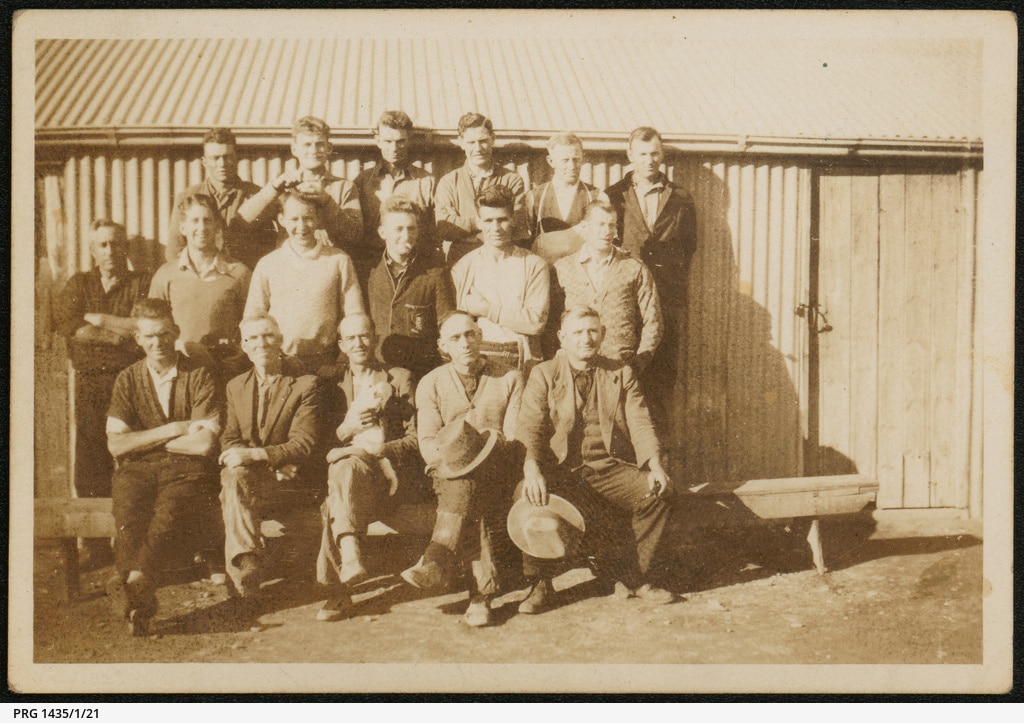 The shearing team working on Wirrealpa station in 1931. Image courtesy of the State Library of South Australia.

In the early part of the 2010’s the drought was still hurting us but no more school fees meant some free capital and funding to look at other innovative measures. A project was kicked off to take a new perspective on property management, with the goal of reducing erosion, directing flood water to the right places and ultimately grow more vegetation and increase the productive land area.

As the drought broke and commodity prices were favourable, it meant that capital investment could be made in to upgrading windmills to solar pumps, new yards and fencing to make practices more efficient.

Today, the station is purely run by my father and mother with part time staff. A far cry from 20+ staff in the 1950’s…. 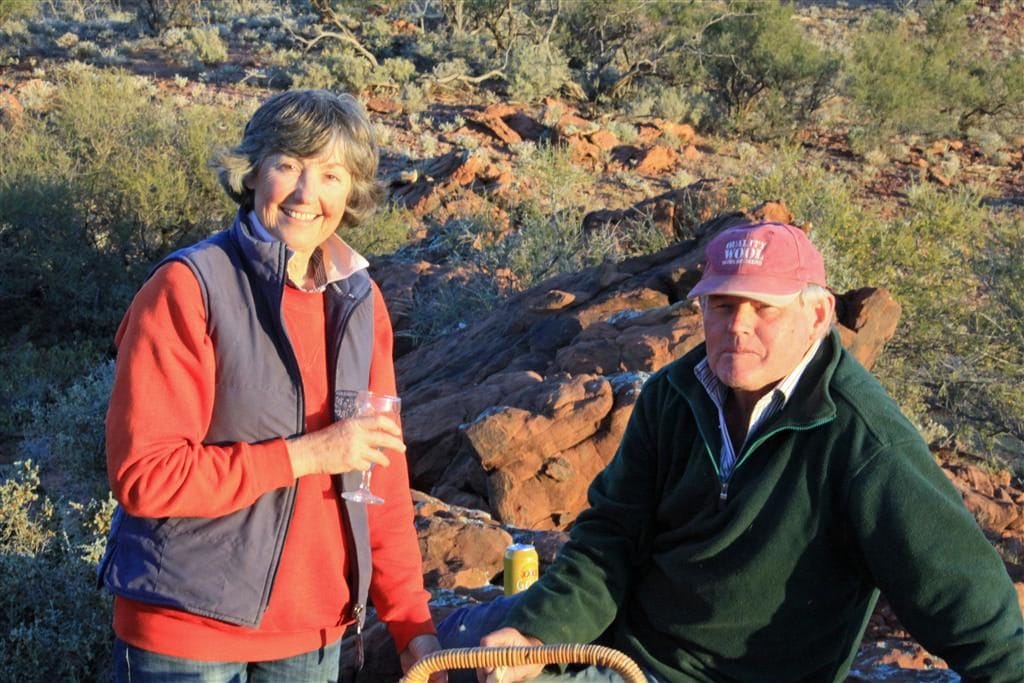 Barb and Warren Fargher at Wirrealpa Station. Image courtesy of the Flying the Outback.

So are farmers innovative?

Farmers need to be a jack of all trades. They need to be: business savvy; scientists; agronomists; animal experts; environmentalists, people managers, good with their hands and good at fixing things. Ultimately they need to be innovative.

I would argue that if a farmer is not innovative in their business, then they may not be in business for very long. Dealing with changes in climatic conditions, commodities prices and all the other risks that face these businesses, innovation is vital.

The next time I hear someone say that farmers are not innovative, I will save my words and direct them to this blog.

AgriWebb is helping thousands of farmers around the world to simplify their farm record keeping, solve their audit and accreditation needs and increase the productivity of their farms. AgriWebb is the only App on the market with “drag and drop” technology allowing for simplified record-keeping across the entire farm. Key features: 1. Paddock and livestock record keeping 2. Farm mapping available offline 3. Audit and compliance 4. Operational Plan 5. Individual animal management. 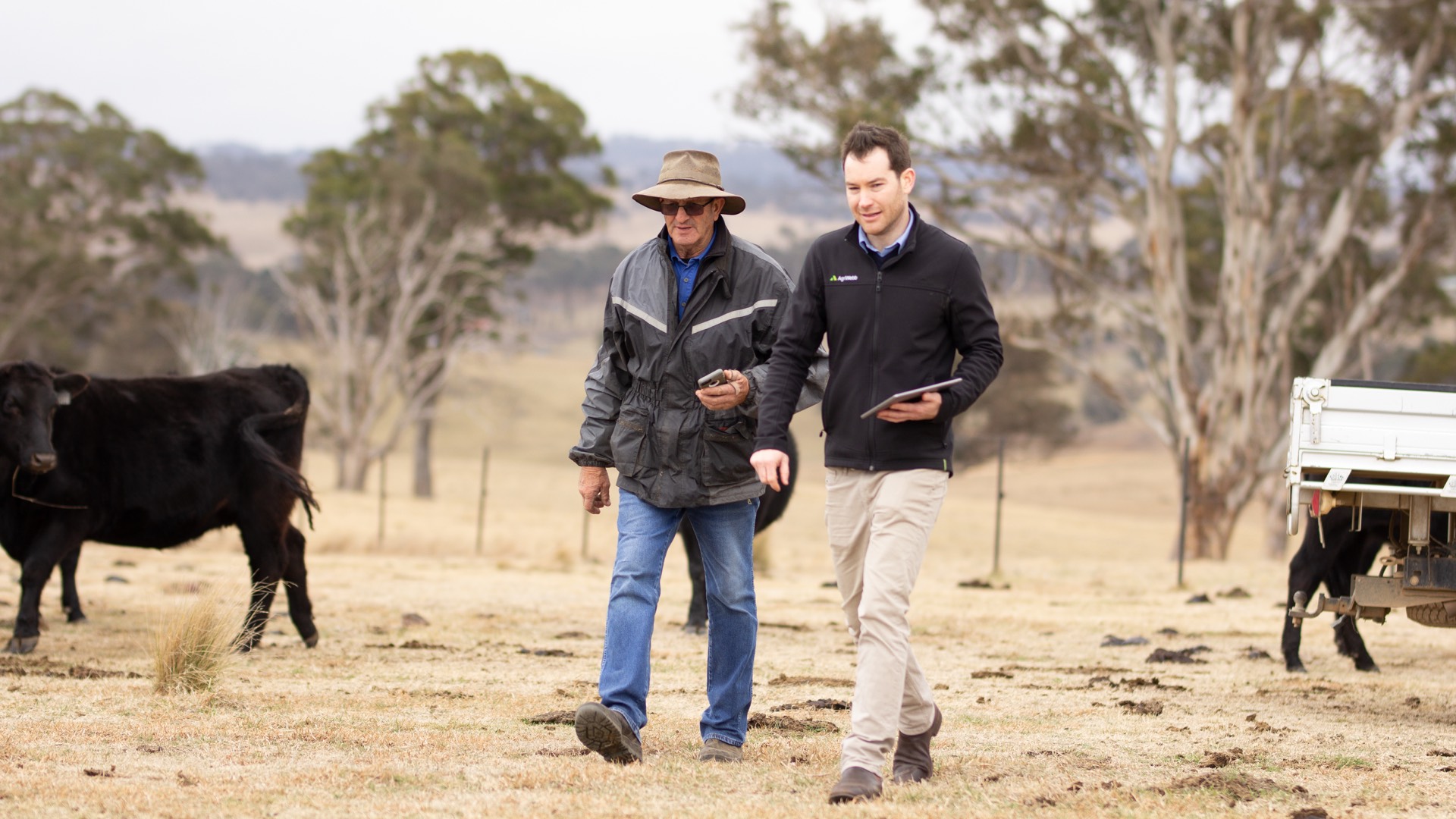 An iPad in the paddock. Innovation runs in our family. (John, pictured right).

< Breast cancer in the bush > Chewing the fat