It’s only a word

Bad habits generally creep in slowly. My friend who happens to also be my livestock selling agent has developed a bad habit over his career. He sometimes says to me, “I can get rid of those cows for you.” Or, “I will quit those lambs for you.”

I get pretty straight with him nowadays because he instantly knows what my reaction will be. “Mate,” I say, “Those cows and I have done too much together to ‘Get rid’ of them. Those lambs have worked their butts off to make me money. We don’t ‘Quit’ or ‘Get rid of’ anything around here!” I have known some of those cows for longer than I have known my agent friend!

Its only a word, I know, but it affects our thinking and ultimately pushes us right down to where we think we belong as food producers – at the bottom of the food chain. Yet we stomp our feet at the general population, asking them to respect us farmers who feed them. But then we go on to disrespect our animals and the job that they have done for us by just ‘Quitting them.’

I can vouch for the effect that a change of language will cause. When my friend the agent (just to please me) says, “Let’s market those cows,” or “I’m going to get you the best price for those lambs”, subconsciously he is now prepared to do just that. Its now a value proposition rather than a ‘get-out-of-trouble’ collapse.

So rewardingly often, as a result of this change, he finds me better deals. He looks a lot harder for me and all of his clients. His purpose changes from a transaction service provider to a networker and marketer with an eye for detail. The same bloke who was yesterday a herd-quitter is today a food and fibre broker who is not only finding us a great deal on these animals but has plenty more where that came from.

Abundance! It’s the essence of farming when we are growing things. We’re in one of the few trades where we can depend on natural multiplication of plants and animals to grow our inventory and cashflow. We look towards our crops to grow, our breeders to reproduce and our grass to flourish to fatten their offspring. Everyone and everything on the farm are doing their job well. So, why quit them? Who wins when we get rid of anything? Its disrespectful!

If we can change our habits, we are demonstrating to ourselves and others that we are doing good and positive stuff about the things over which we have total control. We can do little about the markets that we sell into. We can do lots about the way we sell into them. Careful planning using the skills of good networkers and advisers as well as our own research is invaluable.

So, next time someone says, “Time we got rid of those sheep”, or “Better quit those silos of grain”, stop and remind them just how much effort and toil went into creating that product. Ultimately, its up to us to start a new habit of saying what it is that we really want – to sell produce profitably. 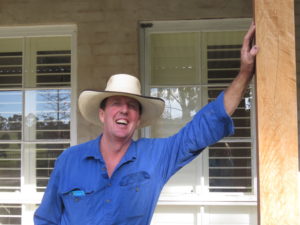