Kachana’s driveway in the sky

We have all heard that pigs can fly… so let me tell you a story!

My name is Bobby and I grew up and live on Kachana Station in the Kimberley, WA. My family and I are lucky to call a small portion of this beautiful region, home. It is not your average home but it’s our home and we wouldn’t change too much, particularly not the fact that we don’t have a driveway… or any maintained roads in fact! That’s right, we have no road access and for most of it we hope to keep it that way! 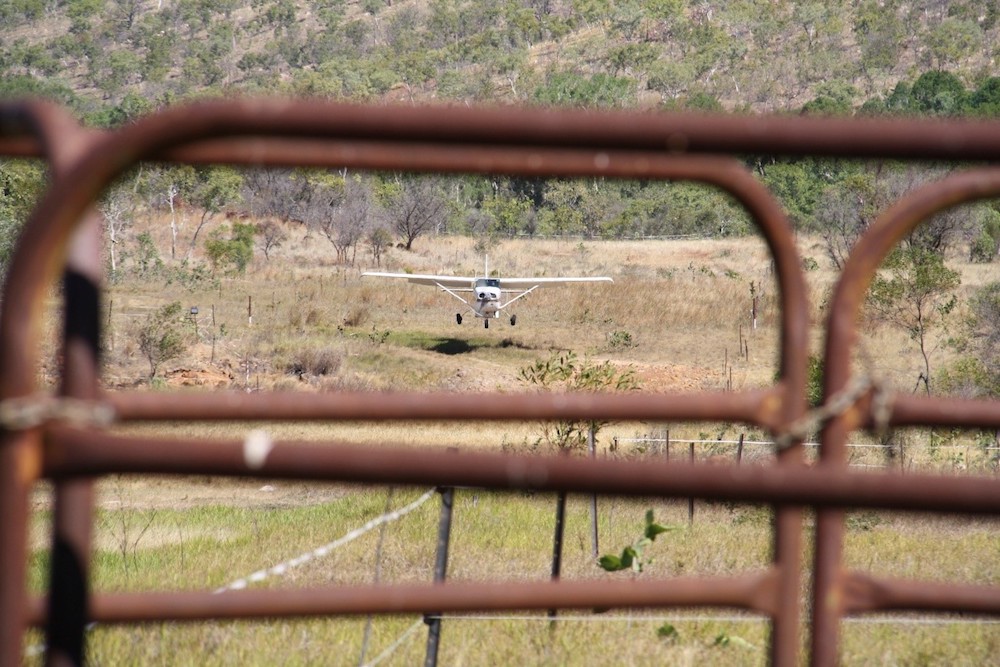 Landing at the home strip on Kachana Station in the east Kimberley.

Growing up as a small kid being surrounded by aircraft and always having a fascination for anything that flies or goes fast, I quickly became and am still involved in the aviation industry. Having a runway out the front of the house and another 4 on the property set the stage. Now my father, older sister and I all have our pilot’s license.

Disagreement with my remote schooling and my long-suffering teacher (mum) saw me start my career at 14 to become a licenced aircraft maintenance engineer, or in other words a plane mechanic. 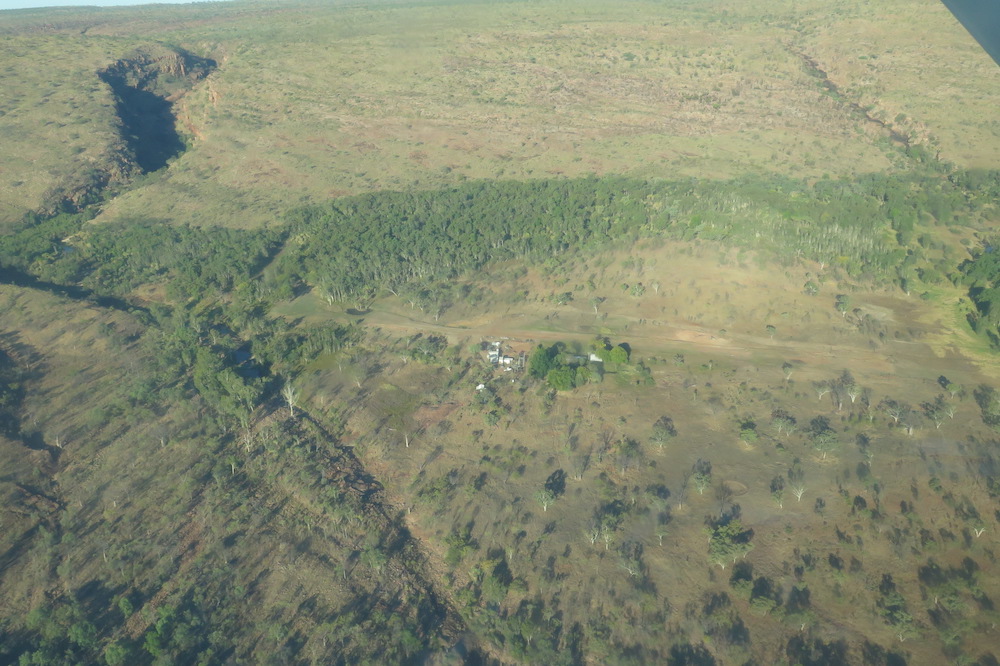 Hidden in the rocks next to the Durack Ranges, Kachana is a challenge to get to.

In the early days when dad planned to shift us to Kachana, he knew that aircraft was the most cost-effective way as the maintenance of the two access tracks would far outweigh the cost of operating the aeroplane. This was primarily due to location and amount of rainfall we experience in the wet. Wasting no time, he got his pilot’s licence and our first aircraft.

In 1990 a tractor and Landcruiser pulled in a trailer and an old public works caravan and a few other things. This was an 88 km, 3.5 week drive through the rocks that cost twenty-one tires on a track that disappeared during the next wet. This marked our start! We have only once driven one onother vehicle in since.

Strip building was by hand and weeks on the tractor, doing what a D9 could do in minutes. This was the daily activity until a patch of dirt looked almost as good as a small strip of graded road. The first landings were a cause for celebrations of tremendous proportions! 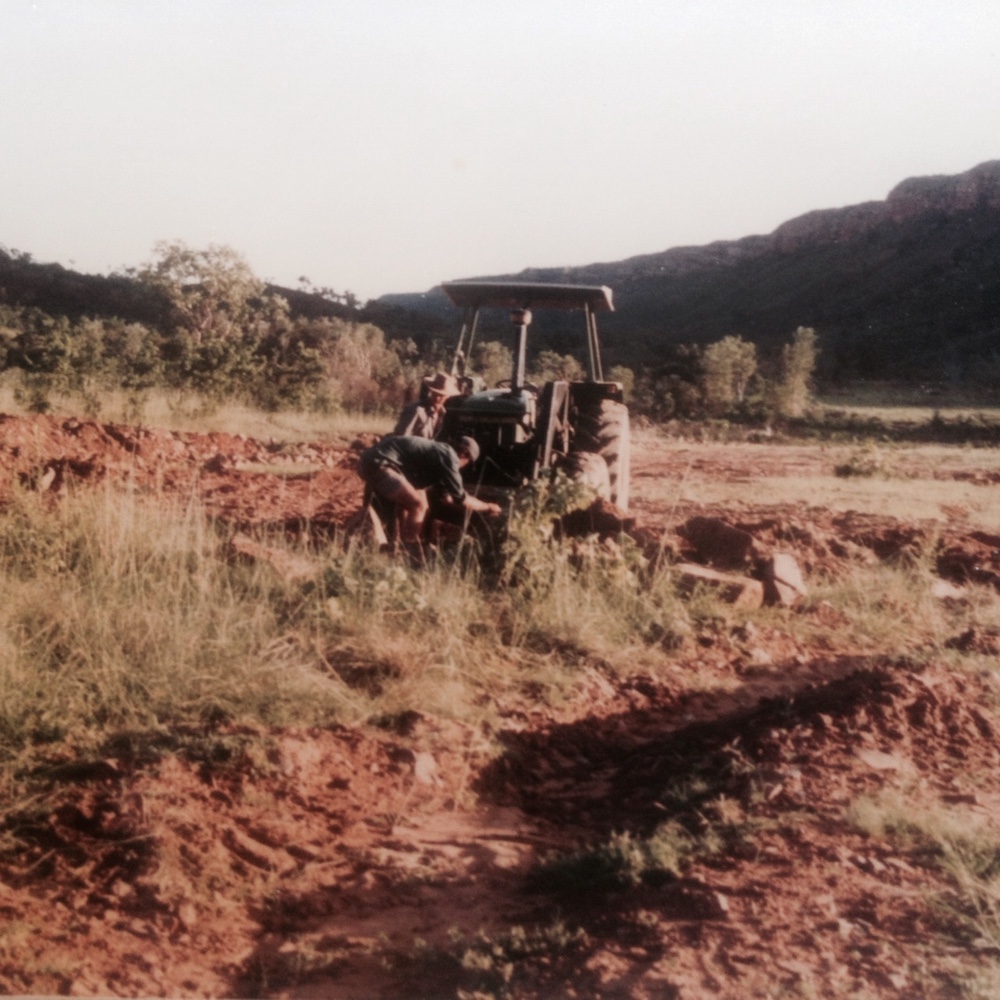 The tractor hard at work building the airstrip at the camp! This tractor has built 5 airstrips. 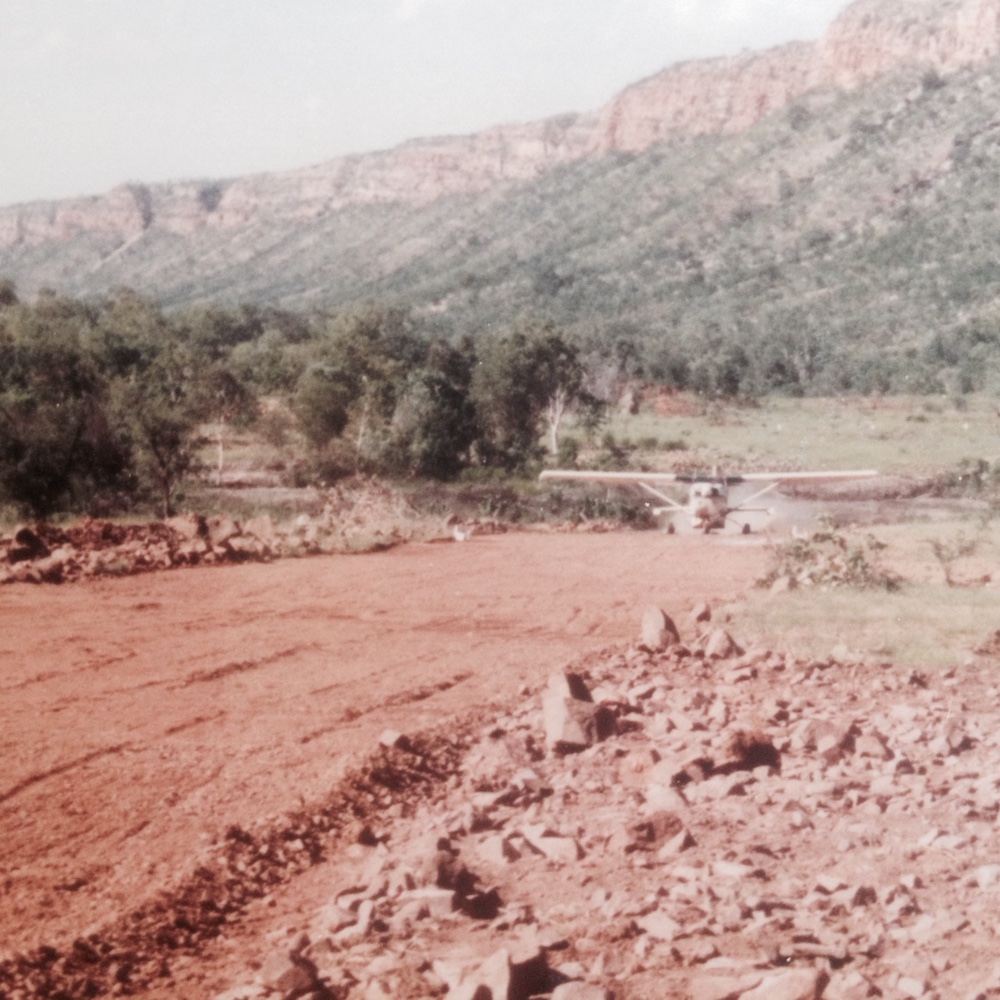 The first landing at the homestead!

Early landings were always accompanied by the obligatory walk down the strip to inspect how it was holding up and, in some cases, for us kids, to count the bumps! 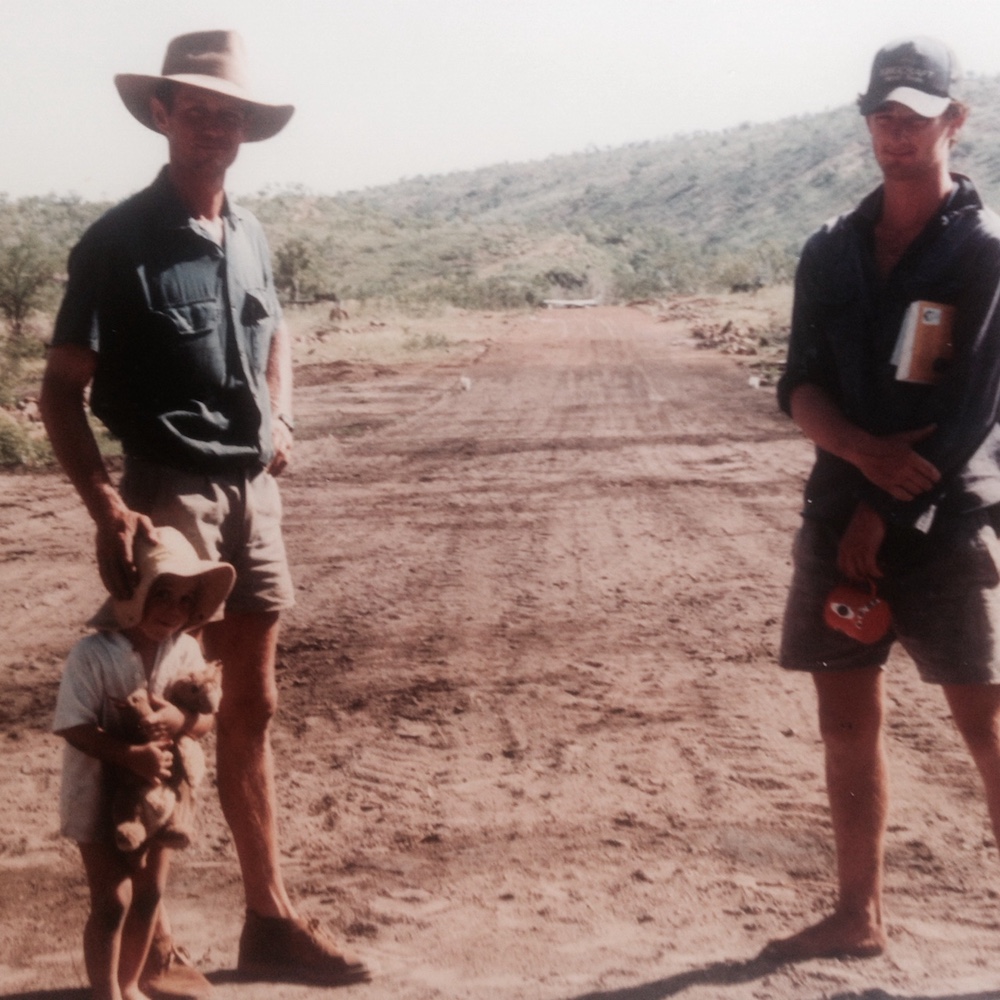 Inspecting the strip after the first landing.

To us, the aircraft is the ute and believe me, the old Cessna would give most station utes a run for their money when it comes to loads its shifted! Boasting a mighty 500kg payload that varies on the day, and mood of the pilot and the winds, it is amazing what can fly!

The American built Cessna 206 is a 6-seat aircraft with 300hp engine and amazing short field performance making it one of the best bush planes ever built. Here we are unloading the ute after a trip to town. On average we get supplies every two weeks.

Everything out here with the exception of the aforementioned machinery has indeed all been flown in… you name it; tables, chairs, washing machines, food supplies, building materials, people, plants, fuel, gas, poly-pipe, dairy calves and the Shetland pony… Yep you read that correctly, but that’s another story.

The logistics of our 90-minute return trip to Kununurra is for us second nature and part of our lives. Watching the country from above as it changes throughout the year gives us the same level of joy as every farmer experiences heading home down their driveway after a trip to the world beyond the gate…. hang on… what gate? 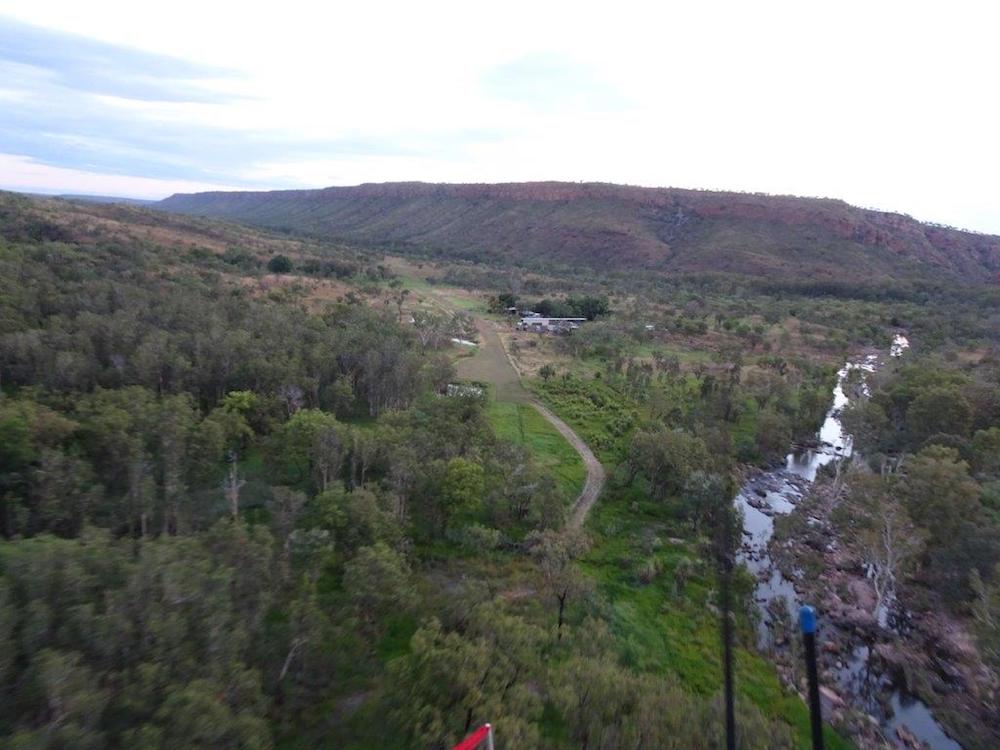 Aerial view of the airstrip. The homestead site can be seen to the right of the strip. The Durack Ranges are in the background and Sandpit creek flows in a North-Western direction and joins the Chamberlain River in the next valley.

Aviation in various forms plays a big part on many stations and indeed country Australia still relies heavily on services the men and women in this industry provide, be it cattle mustering, bore runs, mail deliveries and of course the amazing Royal Flying Doctor Service.

We routinely use aircraft for cattle spotting and fire spotting. For bushfire prevention, we drop incendiary capsules from the aircraft onto designated areas during our pre-fire season. These early burn-offs create firebreaks and vary the age and build-up of vegetation in the large areas of land that we manage.

Flying the plane home from the big strip after a day’s work to park ‘her’ up and head to the house for beer and dinner is, I believe, a great way to end the day and I would be lying if I said we consider the old girl as just another machine. Without her we would not be here! 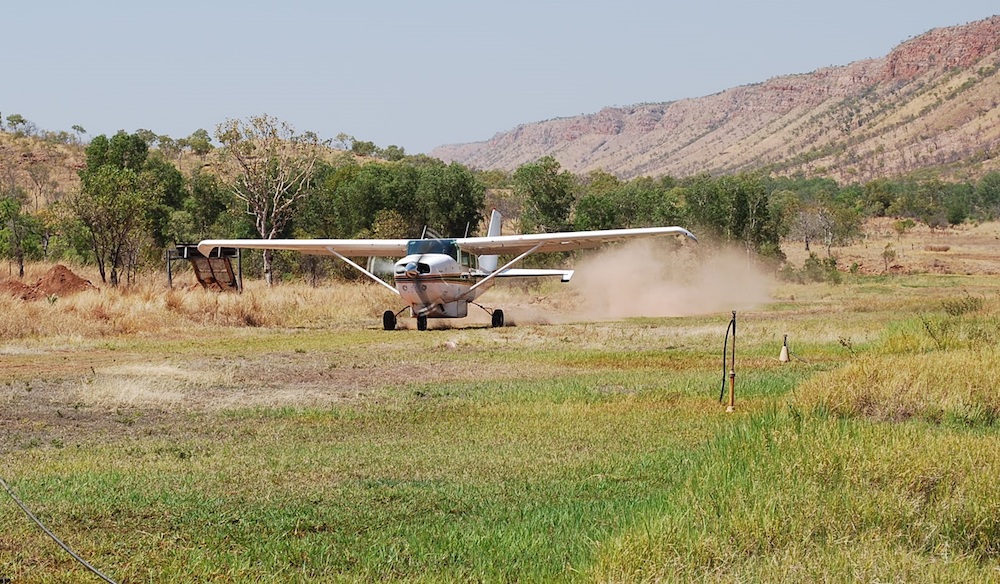 As expected we have all had some memorable occasions that involve aircraft, but I am thankful that we have been blessed over the years with no big mishaps and I write this knowing painfully well that others in the country community have not been so lucky.

Sitting on the backseat of the plane as the brakes failed and we ended up off the end of the runway, as a little boy, I still recall the first time I heard the old man use the F word. Resulting in a new prop, engine and a nice repair bill, we got away lightly. My mum after all these years of flying would still prefer to drive, I think… she has not taken up walking to town so it’s safe to say she will remain a passenger with us for some time yet!

My older sister flies her little gyrocopter and lands with a grin and a good story of the latest adventure. After being overtaken by the odd thunderstorm or wind, she also knows the feeling of relief to having both feet planted safely back on good earth. A feeling I have also experienced.

As a poster often seen at flying schools reads: “Aviation is not inherently dangerous. But to an even greater degree than the sea, it is terribly unforgiving of any carelessness, incapacity or neglect.” 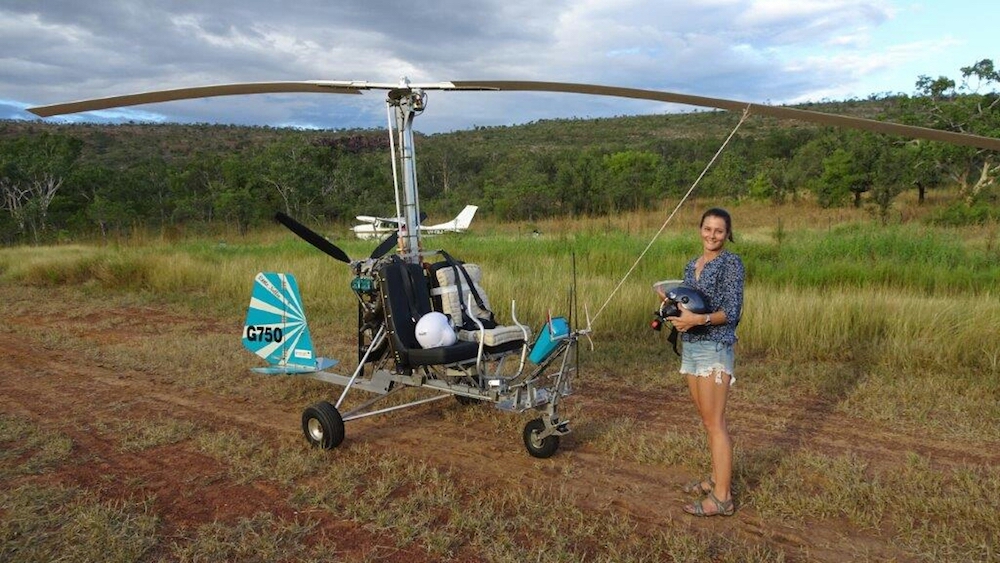 Rebecca with her gyrocopter “Little Nellie”. This is an Australian built machine. The Cessna 206 in the background.