Being part of the management team at Blina, I wear many hats, one of these being the stand-in bore runner when we have been short staffed, or down to skeleton crew over the wet. This has meant that I’ve done more than a few miles on different occasions with my faithful old dog riding shotgun and the tunes cranking. In recent years that iPhone has been blasting the wiggles and my side kick has been our wild little boy in his car seat… more recently still, pregnant with our little girl. 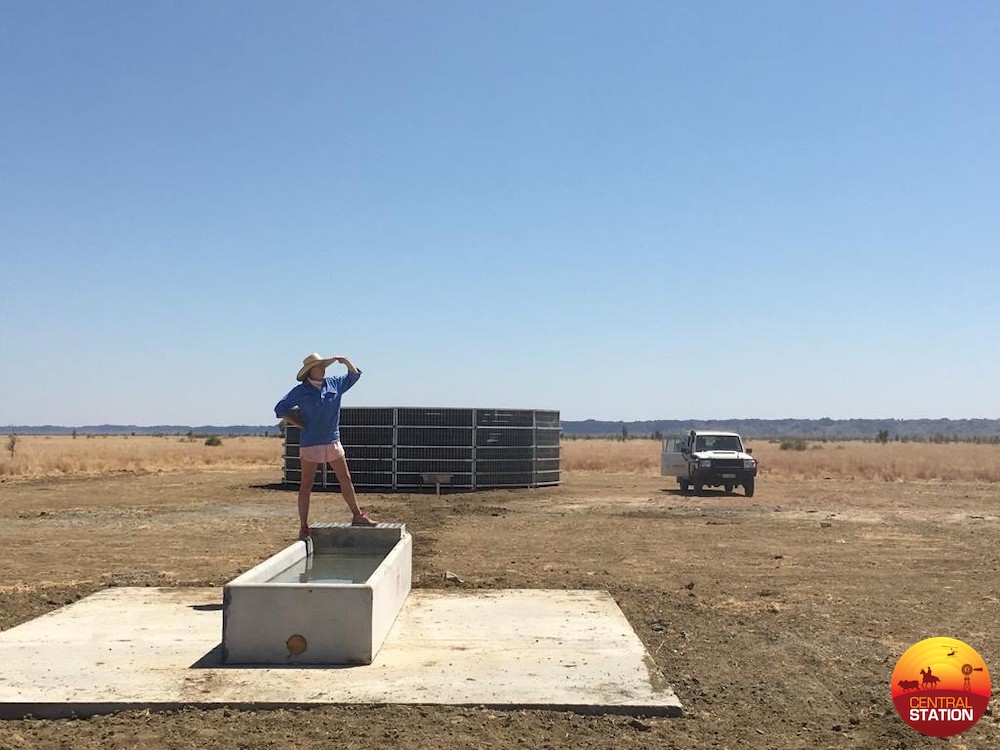 As I approach the water point in the Toyota, I see calves kicking up their legs and headbutting each other, their mothers watching on, chewing their cuds and camped up under the trees nearby. Big humpbacked bulls size one another up as they circle each other around the flat stirring up the dust as they go. As I approach, I am looking for a number of things: I look at the condition of the cattle; are they looking thin, fat, shiny? Are there many calves and weaners running about the place? I also look for anything sick or injured. I look at the condition of the feed in the paddock, I run an eye over the one tonne bags of supplement to monitor consumption rates and ensure that cattle are able to access without any issues. 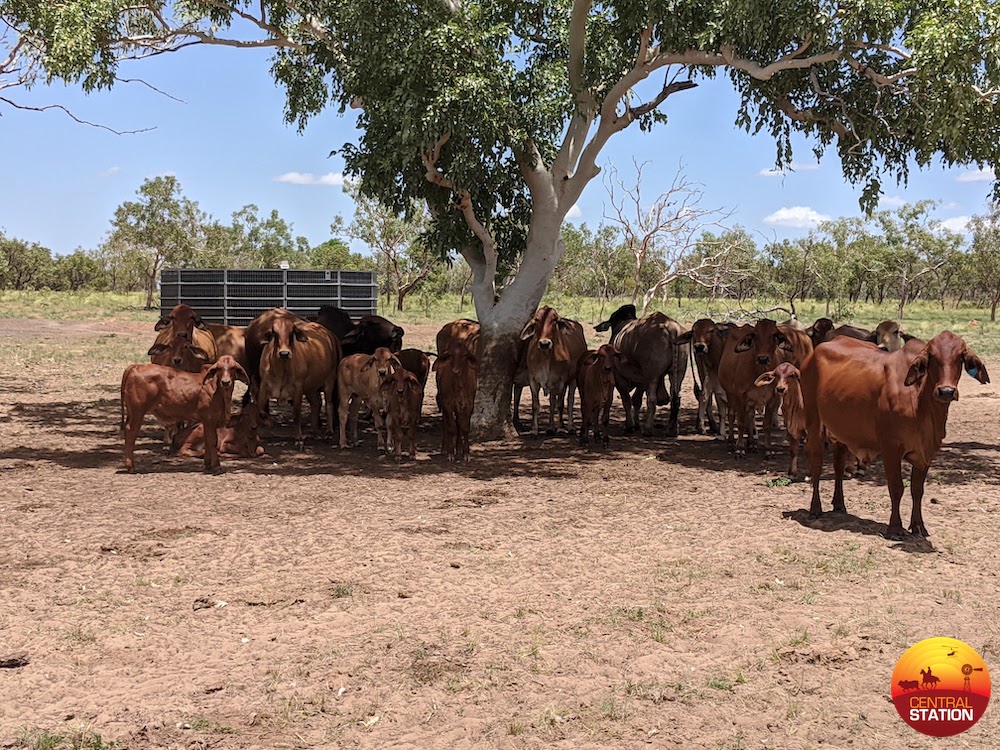 I stop the Toyota and pull on the handbrake… you know the Toyota handbrakes that always seem to not work properly, no matter how recently they have been adjusted? I often ponder how it can be that the faithful old Toyota Landcruiser has seen so many changes such as fuel injection, traction control but the handbrake remains rubbish. Anyway, I check my young son who is strapped in his car seat on the passenger side of the Toyota, I leave the car running as I step out. Even before I had kids, I made it a habit to leave the car running, that way if the battery is cactus or there’s any other issues you never get stuck with a car that won’t start. 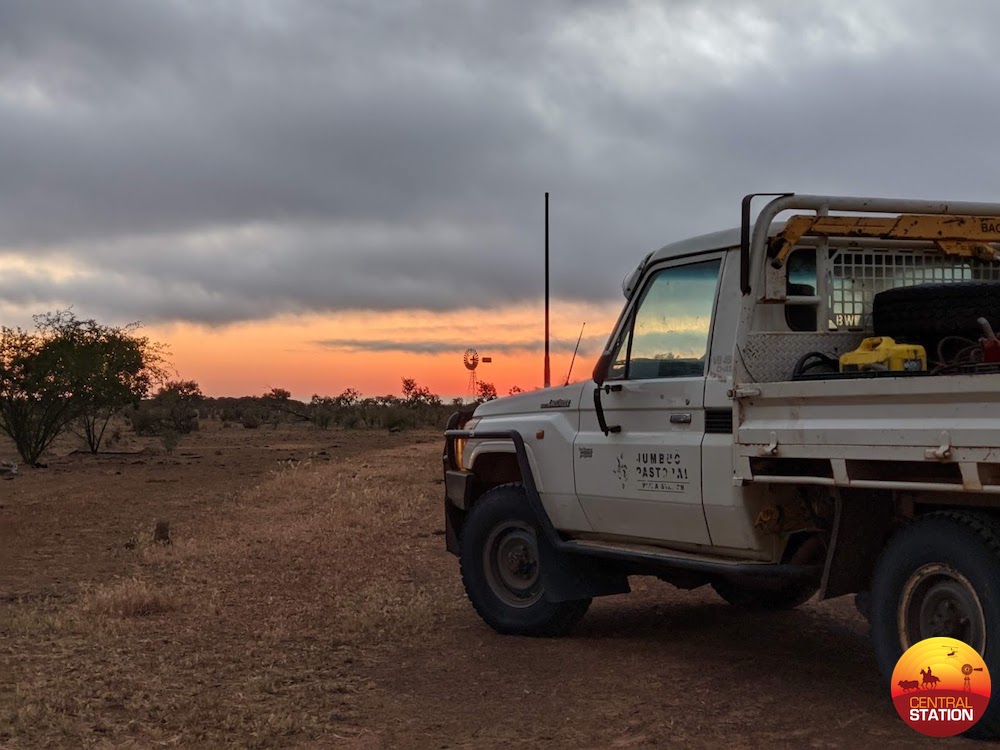 The boreman’s Toyota and set up.

I then walk over to the turkey nest / tank/ dam (depending on the water point) to check the level and if there is water pumping in. I do this first because of the very rare occasion that it is seriously low, I am not going to drop the water out of the trough, wasting water. The water is pretty reliable here on Blina so usually its full or just a little down and the water is pumping in. As I walk up, I am looking for any soggy spots or grass that seems a little too green for that time of year; that might indicate a leak in the line, usually on your way to the nest/tank/dam you pass the bore hole and the pump. We use solar power and windmills to pump our water at Blina.

The windmills have pumpjacks and a motor to assist with pumping when there’s not much wind or we have a heap of cattle on the water and it’s not quite keeping up. Sometimes if the nest is low, I’ll go and put it ‘on the jack’. Meaning, in simple terms- you disconnect the windmill rod from the fan and on to the pumpjack so that the motor pumps the water by moving the rod up and down instead of the fan. This is a bit of a balancing act, and is only done by those of us who have been shown a bit about windmills. It can be a bit risky as windmills have lots of moving parts and you have to move quickly – as most often when you are moving on and off the jack- the wind picks up and you are working with a rod that is moving up and down as you are trying to bolt it together. Over the years, even the most experienced of windmill men and women have been injured starting pumpjacks and carrying out maintenance on mills. 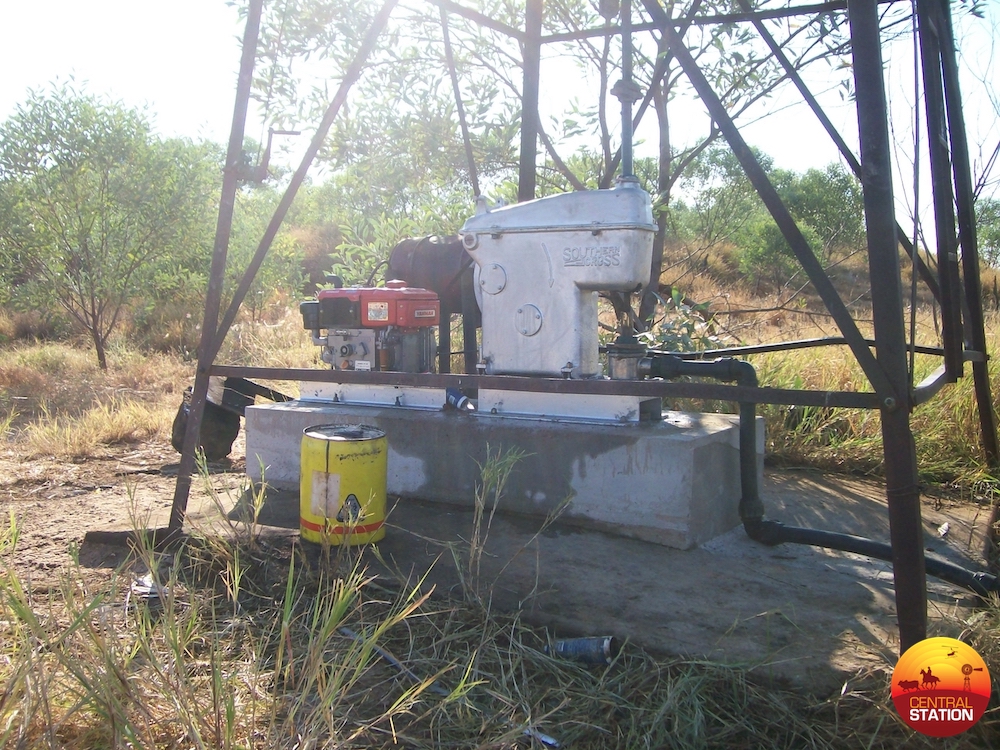 Pumpjack and motor underneath windmill.

It is for this reason that over time as the mills have major and expensive repairs needed, they are replaced with solar powered systems and electric pumps. If you have a solar pump that isn’t keeping up due to a cloudy day etc, or more cattle than normal – you just have to plug in a genset and flick a switch and ‘bobs ya uncle’, she’s pumping flat out. (provided of course that the supply underground is adequate). 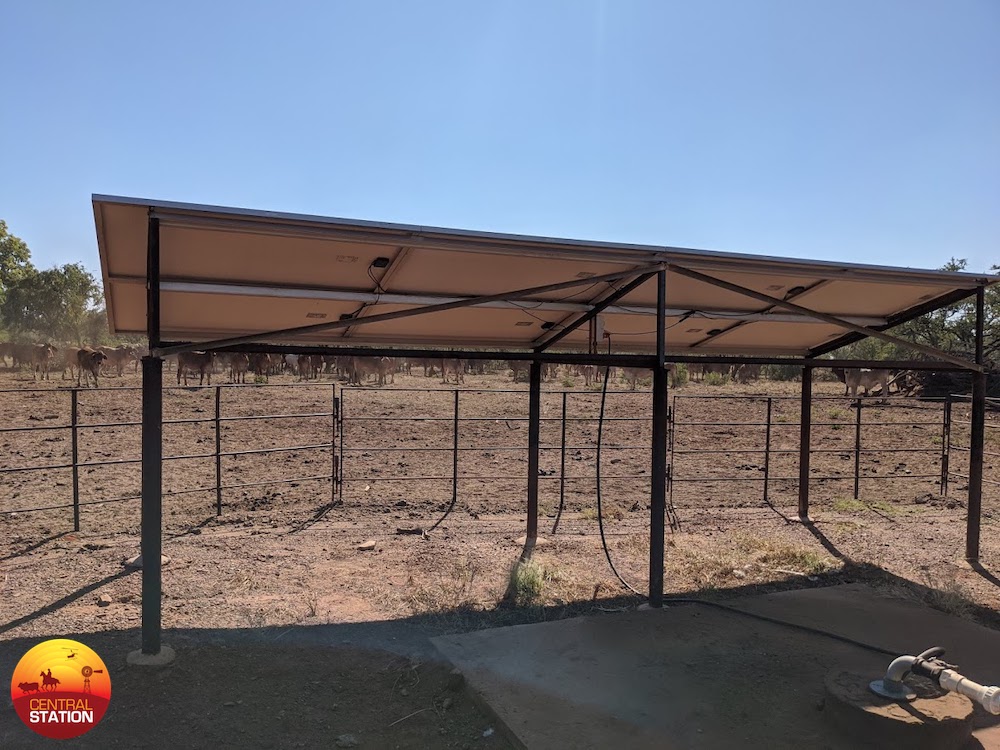 So, back to my water point scenario- if the mill / solar etc is all good and storage is full or nearly full- I then make my way over to the trough. I’ll swing past the Toyota to check that feral toddler hasn’t choked the baby with sultanas and grab a pair of pliers and the trough broom, that way if the trough is dirty, I don’t have to double back and get them. Often, if its been a while – I’d let Harrison out of the car to splash in the mud or play in the trough.

I lift the float guard and check that water is coming out of the float by pushing it down. I look at the water to see if it is clean or dirty. If it is dirty and has lots of algae or debris floating in it, I will drop the water out by undoing the bung with the pliers and scrub the trough with the broom, running clean water through to flush the trough. Dirty water is very detrimental to cattle health and production; and can sometimes harbour disease so it is so important to check and clean troughs. 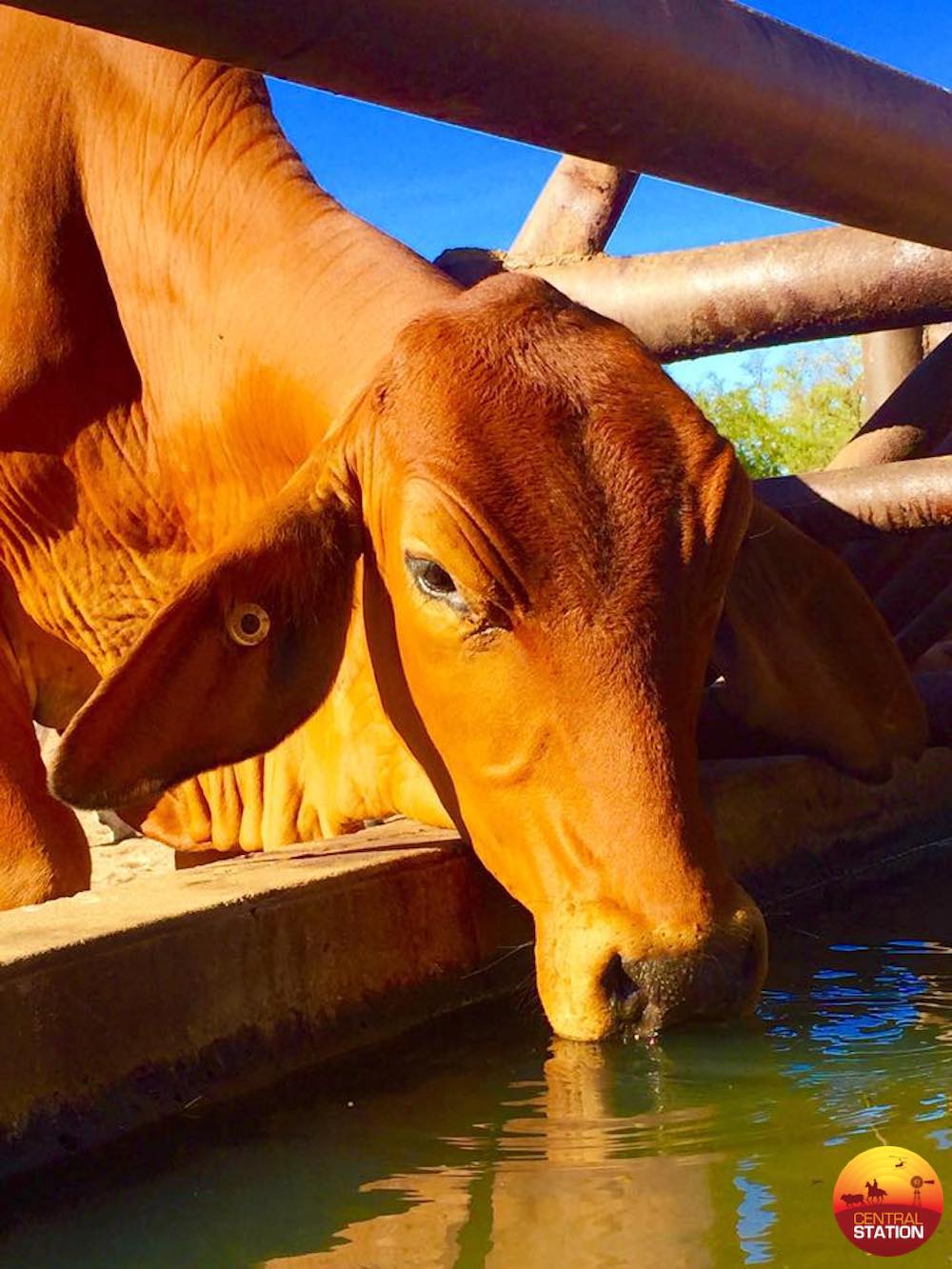 Getting a good drink.

Regular water runs are so imperative to running a good cattle operation. We also utilise ‘farmbots’ remote satellite water monitoring system that allows water levels to be checked at any time from a phone or computer; and sends Matt, myself and the boremen alerts via email or SMS when they reach a certain level. Electronic systems will never replace the old-fashioned water run, but it certainly gives peace of mind on crucial waters and the ability to attend to problems in a much timelier manner. The water run is so much more than checking waters, you are monitoring and checking grass / feed in paddocks, the health and condition of the cattle, checking station infrastructure such as roads and fences, yards and gates. You are also checking on consumption of any supplement that is out and making any minor repairs. Anything major is patched together best you can and reported back, so that a proper plan can be put in place to allocate the required resources (time, staff and materials) for repair. There is a bit more to the boreman/overseer job than the water run, please note that this is just a brief overview of a portion of the role.

Squelching through mud, fixing fences and driving around in a Toyota is not really as romantic or exciting as ripping around on a horse through the scrub after a rogue micky or flying a chopper but in our opinion, it is definitely one of the most crucial jobs on the station and requires a special attention to detail, unique skillset and above all, honesty and integrity. No water, no cattle operation. Its as simple as that.