The following letter details my version of events for an incident that occurred on the 12th of July 2017. It was a moment in time that has changed my life forever. Please destroy all evidence of this document once you have finished reading…

The sun had risen over the frosty plains of Kalyeeda Station that stark Tuesday morning. I was wearing a new, long sleeved, navy blue work shirt. The colour seemed to take away the bluntness of the dark rings under my eyes – the remaining visual relic giving insight into my treacherous weekend at Fitzroy Rodeo.

I remember feeling remarkably upbeat considering my circumstances. I had no real hangover and seemed to have slept well the night before after a large dinner of Rosie’s Chicken and Choccy milk. I was instructed by James that I was to set out on the motorbike and assist Dave – our regular helicopter pilot – muster the cattle in Duck Hole paddock to the yards for the road trains that were arriving the next day to take them to Broome for export.

A simple instruction. I couldn’t think of a better thing to do then set out on a solo motorbike ride. A perfect place to reflect on the rodeo weekend I had just returned from.

I have replayed this day in my head countless times and one thing forever stands out to me; The peacefulness of the morning.

Everything that day seemed to move freely. It wasn’t too cold. It wasn’t too hot. The bike was already fuelled up. My helmet smelt almost clean. Even the track out to the first billabong I was to wait at seemed smooth. I cruised out to the blissful silence of nature. Just the hum of the motorbike faintly reaching my ears through the helmet.

When I arrived at the billabong there was an old bull drinking as some brolgas walked through the marshes. The water lilies stood out of the surface like small frozen fireworks. I had never noticed the beauty of this place, yet it was my second season here. I was allowed to sit under a tree for approximately 12 minutes before Dave gave me a call over the radio suggesting I take the eastern track out towards the second water point where he had a group of slow moving heifers that I could sit behind as they wandered down a cattle pad.

“No worries – copy that” I replied over the radio as I clipped my helmet back up and rode off towards the east. Once again, I was alarmed by the smoothness and almost peacefulness of the journey. It was approximately 6:36am and I was at cruising speed when I noticed an emu trot across the plain to my left. I was admiring the grace and speed of the animal when my bike for the first time that morning hit a small bump.

More of a small, singular corrugation in the track.

A small, singular corrugation in the track that triggered a catastrophic horror show within my internal organs.

I felt the pinch, mum. I believe at one point or another every one’s felt the pinch. The pinch to tell you that your hole in one has or is about to say too much at the dinner table. The pinch that once felt by an individual gives that person the urgent confidence to stand up in any setting and say;

“I HAVE TO BE EXCUSED NOW PLEASE SORRY THANKYOU”.

I felt that pinch mum. I froze.

The bike was still travelling along. I felt my pulse in my ears. The bush track I was on seemed to extend out in front of my very eyes. I stared straight ahead for a whole minute, but I had to know the extent of my trauma.

I sat a little deeper in my seat. Still staring straight ahead I moved my buttocks slightly to the left and then again slightly to the right. I had to know. I had to know whether my devils o-ring had broken its vow of silence. I focused all my energy at my sensory nervous system in my pants.

My iron curtain keeping the darkness from my denim had remained intact. I exhaled through my nose. As relief filled my lungs. I couldn’t help myself, I laughed out loud.

The bike jolted to the side.

This time I didn’t have to sit deeper and check that the drought in my seat had remained. The o-ring had lost its seal. The iron curtain had risen and the rains had started to come down in Africa. This is what Toto was talking about.

“Jesus, no!” I remember pleading.

“Why?” I remember whispering.

Mum, this is the hardest thing I’ve ever had to admit to you, but I need you to know so I can move on with my life.

At the age of 22, your second child and eldest son pit his shants.

I knew it wasn’t quite a code red dam bust, just an amber alert pipe leak at this stage but like they had been warning us in the first 7 seasons of Game of Thrones, winter was coming.

I knew if I didn’t pull over and stiff leg it to the nearest wattle bush winter would well and truly massacre my dignity and my new wranglers.

Mum, I’m going to be straight with you here. For the next 15 minutes I prayed. Out loud.

“Dear heavenly father forgive me for I have sinned. I knew not, despite many a warning from James, the ungodly wrath Rosie’s Chicken could have. Why does something so good hath such fury?”

“It’s been a while since we spoke, God but if you could just help me out with a toilet paper miracle real soon, I promise I’ll never tease Hamish about his gluten freedom again!”

I’ll be honest, Mum. 15 minutes of running water will fill up a decent sized bathtub if you know what I mean, and I was starting to get emotional by about the 7th minute.

Whilst I was panting with exhaustion after the whole affair, something caught my eye in the distance.

Dave in his Chopper.

Heck me dead. This whole experience was so traumatic I had forgotten that I was meant to be on a muster! I had to hop to it before Dave started to get concerned of my whereabouts. He hadn’t rung me on the radio though so hopefully if I could just figure out how to wipe then I could get going.

I looked around my 2 metre reachable radius for something.

All I saw was spinifex.

I’d had enough punishment to settle on that right away, yet that was literally all this place had to offer me at the time.

I was starting to sweat.

Time was ticking and I had to get moving.

The idea of drip drying had occurred to me but that would take too long. It was too shady where I was and if I pointed the target towards the sun and Dave flew over at the wrong time? He might think it’s a weird SOS signal and call the Feds.

I was sweating big time now because I could see the helicopter getting closer. I wiped my brow with my sleeve. Surprisingly absorbent material. I couldn’t help but wonder what the thread count was.

It was right then and there that it dawned on me what my only comfortable option was.

That had surprisingly absorbent material.

I sadly grabbed the top of my left shoulder with my right hand. I felt the surprisingly absorbent material in my fingers, and I gripped it hard ready to pull.

I could now hear the helicopter getting closer. I closed my eyes, counted to three and pulled down on the surprisingly absorbent material as hard as my depleted strength allowed me to.

Turns out, the shirts surprisingly well made as well.

I had been squatting for so long by this point that my hamstrings had locked up so when I pulled on my sleeves the surprisingly well made and absorbent material didn’t tear at all it just pulled me face first into the sand in front of me.

Out of pure anger of my whole situation I ripped my shirt over my head, pulled out my pocketknife and started slashing at the sleeves until I got one off.

I was saying through gritted teeth as I finally removed my sleeve and aggressively wiped my tender behind until it looked like the Japanese flag.

Out of pure frustration I launched my underwear and two sleeves into the bush and marched out to my bike that was still on the track facing East.

Seeing the bike honestly felt like I’d just walked out of Narnia back to my real life. For a split second I didn’t think I’d remember how to ride it.

As I swung my leg over it Dave flew overhead, quite low and landed about 50m from me on a little flat.

I walked over to meet him thinking about my excuse for the sand on my face, the state of my shirt and my complete absence for the last 25 minutes, but as I met him halfway between my bike and his helicopter all he did was reach out and click my radio off.

“It’s been on the whole time.” He stated blankly as he turned and walked back to his helicopter leaving me – sleeveless – sand still in my eyebrows and about 7kgs lighter standing in the middle of the flat, my bike idling behind me.

It’s been 2 years since that day mum, and I feel like telling you is the next step in my recovery from it.

The world seems a little less bleak now. Please burn this letter and give my love to Dad. 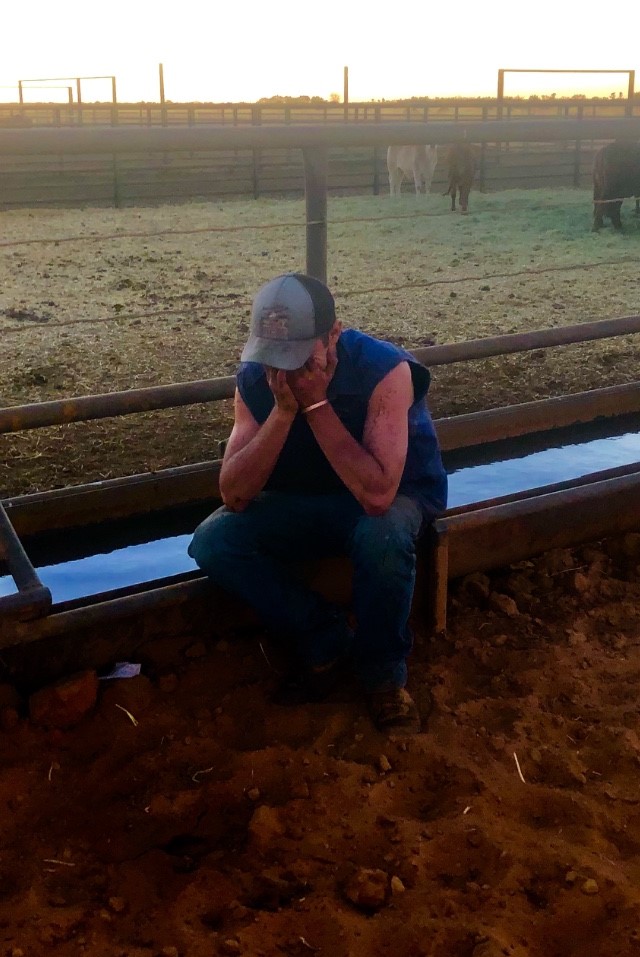 No sleeves on this shirt anymore.