What happens when the vet is too far away to call?

One of the greatest privileges of life on the land is also the most humbling of responsibilities: to not only bear witness to life and death, but to be implicit in the circle of life. Animals will live or die, flourish or falter, under our watch and beneath our hands. We may not always consciously analyse or dissect this truth, as is it so embedded in our way of life and culture, but it is inherent in much of what we do.

Myself unloading a calf from the Toyota, at “Latrobe”. He got tired of trying to keep up with the cows on the walk in to the yards, so we gave him a lift.

Baby lambs on seat of ute, getting a lift while we mustered at “Arlington Park”. 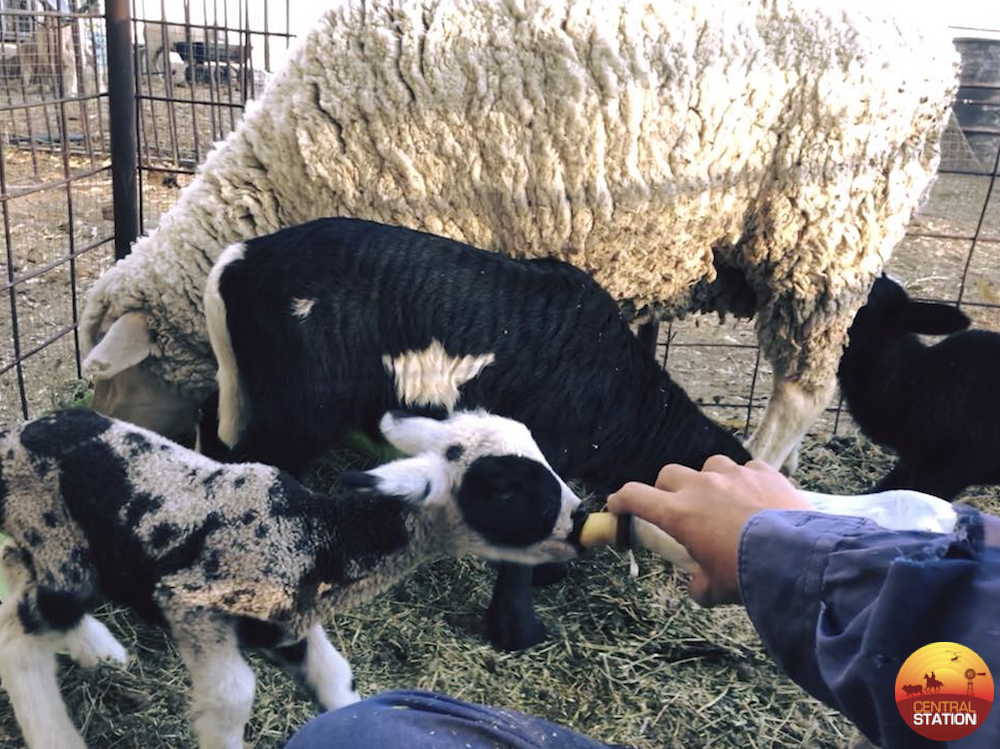 This is a foster mum, a ewe that had her own lamb, that we managed to coerce into feeding several other orphaned lambs at the same time. I still bottle fed Sprinkles, in the foreground.

In the bush you don’t always have immediate access to a vet. We are very lucky to live within an hour of our nearest veterinary clinic; but this does not always equate to immediate access to services when you need them in an emergency, or as an animal’s condition deteriorates. There are some procedures and situations in which it is more practical and timely for us to administer the best care that we can by ourselves.

And there are many animal health concerns that we are well equipped for dealing with, having learnt techniques and tips from one another and from the previous generations of pastoralists before us. For example, fixing a pro-lapse in a calving or pregnant cow, or assisting a cow to calve out when the calf may have presented in the wrong position.

There are little tricks of the trade that you gather along the way: putting sugar on a pro-lapse will help to shrink it and make it easier to manipulate back into place; placing your stitches just so, will allow the cow to urinate easily without relapsing; feeling inside a cow for the difference in joint structure of a calf will help you to recognise which limb you are touching, and how to reposition the calf. Some of this knowledge you gain from your peers and predecessors, some from your local vets, and some of it is hard earned through previous experiences and challenges.

And when that personal experience combines with wisdom from others, and in some cases a healthy dollop of good luck, the rewards can be incredibly uplifting. There is little else that I have experienced in this life, that fills me with the same wonder and awe, than that of witnessing a calf’s first breath in the world outside his mother’s womb.

When assisting to deliver a calf that is stuck or out of position, sometimes they will pretty much come out breathing. But not always. Sometimes, you labour away painstakingly for what seems to be an age; to get the calf in the right spot, on the right angle, to use the right amount of pressure to pull him or her out… and progress for a while might be measured in mere inches. But at some point, the planets align and suddenly there is an avalanche: a slippery mass of warm baby bovine, sliding out towards you, filling you with triumph as you deliver it messily and haphazardly to the ground. And then your elation turns to apprehension, as you note the stillness of its lungs.

You pull the remnants of sack from its little face, and clear the slimy gack from its mouth and rub its spine and give its lungs a little tap, or a bit of a pump, and you don’t even realise that you are now holding your own breath in anticipation. The seconds drag on mercilessly, with no sign of breath. Then, suddenly, wondrously, this inert little sack of hide and hoof, that you have delivered into the world, flexes and stretches beneath your hands; its nose crinkles upwards and its mouth opens wide, and beautiful life-giving air rushes down its demanding throat and inflates its defiant lungs. And suddenly, life begins. Within an hour, it has wobbled to its feet, and after falling over countless times on its quest for mastery over its own limbs, is teetering precariously but victoriously at its mother’s udder. That, to me, is a miracle.

There have been many little miracles and challenges along the way. I once had someone hold a mobile phone near my face while I knelt on the ground behind a cow that I had both of my arms inside of, as our vet explained to me how to dilate her cervix. She had not only gone into labour early, before being fully dilated, but had also pro-lapsed, making it doubly difficult to deliver the calf. But with the right guidance over the phone, I managed eventually to deliver the calf – not before being half bogged in the mud behind as her waters broke and flooded over me.

Then there is the handful of cows that I could not save, but who we managed to perform emergency caesarians on, in order to save their calves. One of those calves was premature enough that her little hooves were still too soft, and walking on them was damaging them horribly. She was robustly healthy otherwise, so we trialled various options of foot protection, and our experimentation culminated in duct taping little foam and leather pads, cut out of stubby coolers, onto her hooves. In one week, her feet had hardened properly and “Little Redskin” was as happy as a pig in mud. 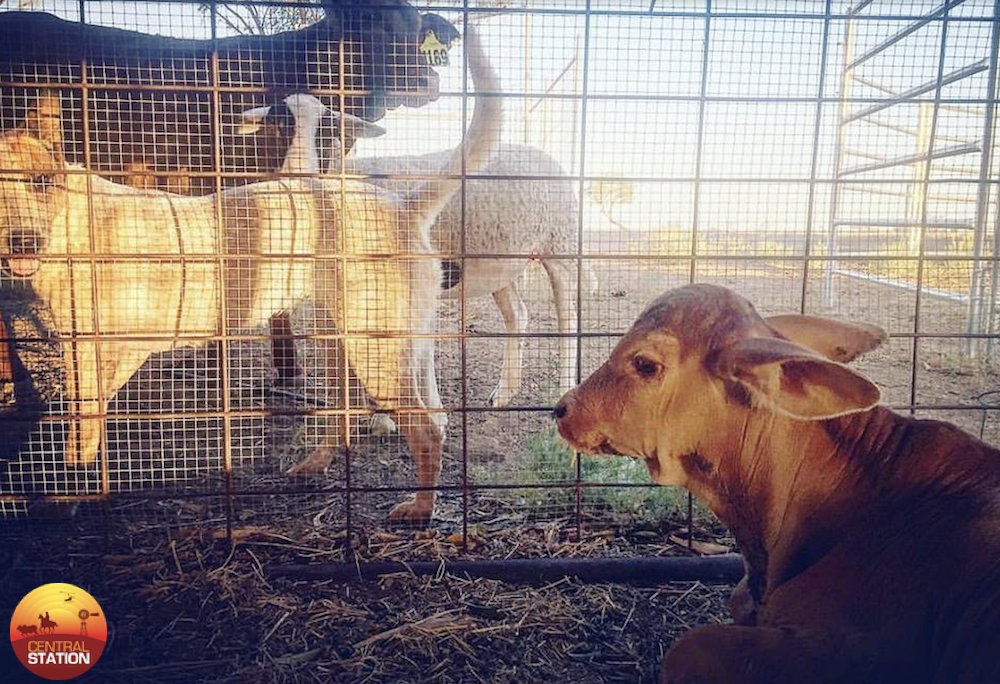 Little Wally, watched over by his friends. He was well cared for, but sadly didn’t make it. He died from acute pneumonia, which can be very difficult to treat in calves. It is never easy to lose animals that you have spent many hours with, and showered with TLC. 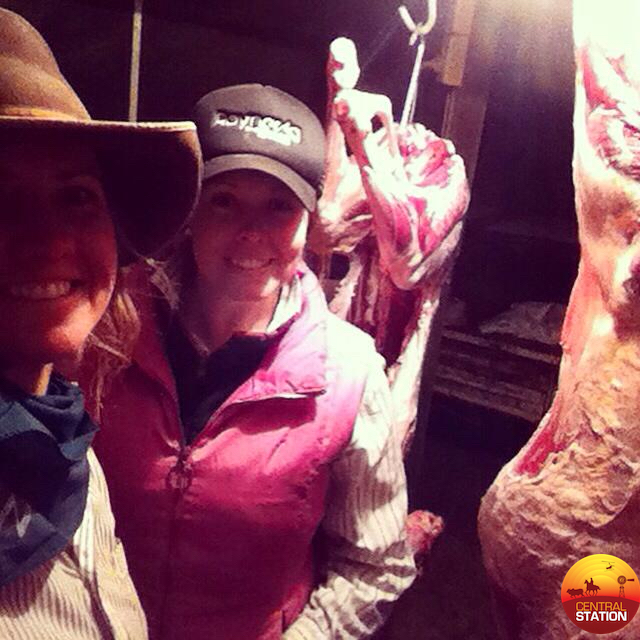 Another facet of the circle of life: killing for sustenance. Amy Cochrane and I hanging up some sheep in our old fashioned butcher shop, after we had killed and dressed four wethers.

But not every story ends in success. There is much to be said for trial and error in those situations where the stakes are a little higher, and no outside expert help is close to hand. Error can lead to loss of life: often of an animal that you have poured a great deal of care into. Things do not always go to plan. Symptoms are not always straightforward. And losses do tug on the heart strings. But every painful loss can become a lesson.

Every moment of regret or doubt, regarding the decisions made when things did not turn out well, can be channelled into a pool of determination, to use your hard earned wisdom to save another life if the opportunity arises. And it pays to remember this: for every moment of loss and hardship, there will be many moments of joy and plenty. Birth will follow death, rain will follow drought, and the wonder and awe of Mother Nature prevails.

Broodmare and foal, as the sun sinks at “Latrobe”.