We did not need wings to escape

While recently trekking from Perth up to the Kimberley, I found myself with yet again another opportunity to make the journey out to Kachana Station. It’s not often that such a trip arises due to the isolation and logistical difficulty of reaching the station, as no maintained vehicle access leaves the options of a forty-minute flight from Kununurra or several days from the nearest track on foot. Nevertheless, I continue to make the journey whenever the chance arises.

I’m sure I speak for most when I say the first entry is something that can never be forgotten, as Chris pulls the plane down along the stunning Durack ranges towards home camp, missing the front door mat by what feels like millimeters on the way through! And we’re here!!

Every trip I’ve made out has entailed new experiences, as there is an abundance of things to get up to – first off, Barra fishing. As most would know the prized barramundi is one of the ‘have to do’s if the opportunity arises up in the top end of Australia, and my first fishing expedition was no exception. A good few hours of walking through absolute picturesque gorges, and I found myself on the Chamberlain river. After knowing  full well the amount of people who have made the journey out to find no success, I was keen to get the line wet and just so happened to pull in a good-sized lunch within the first few casts. Perfect! With the old ‘Beginners Luck’ cliché being thrown my way I was more than happy to see the good fortune keep rolling, as a short time later I cracked the meter club with my third fish. As the bites began to dry up, lunch was put on to cook on an open fire, and boy was it worth the walk out. With belly’s full and morale high, the walk back to main camp began, where a few Kachana Golds (home brew) were awaiting our arrival as usual. Another magnificent day topped off. 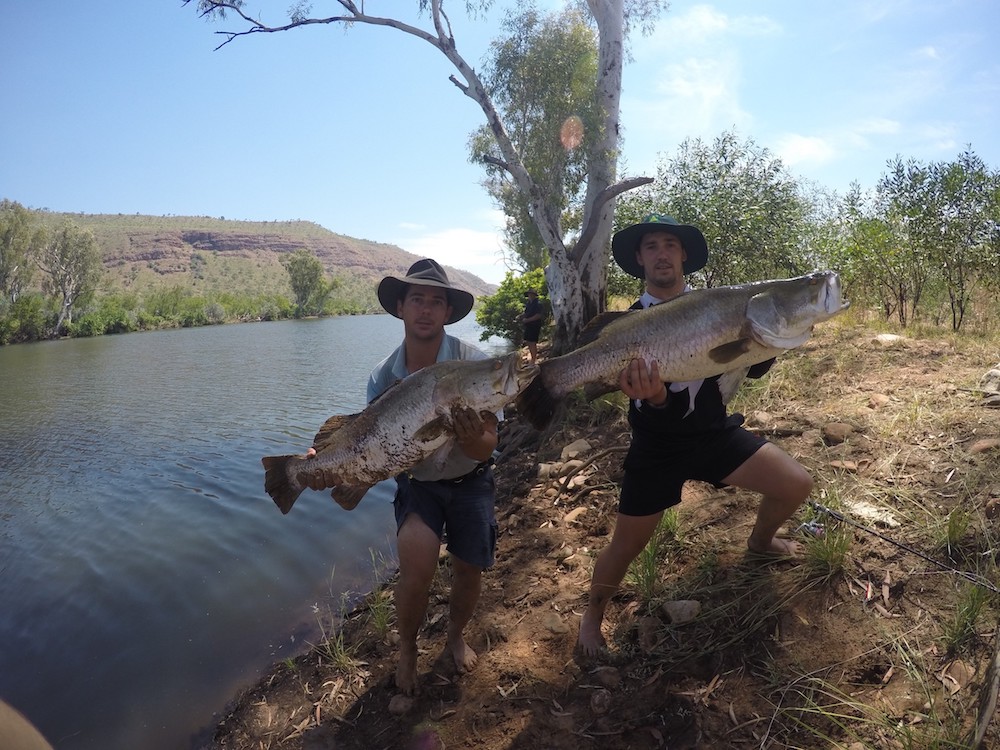 Two “meteries” within a minute! The beautiful girls were picked up for the photo and then carefully released. 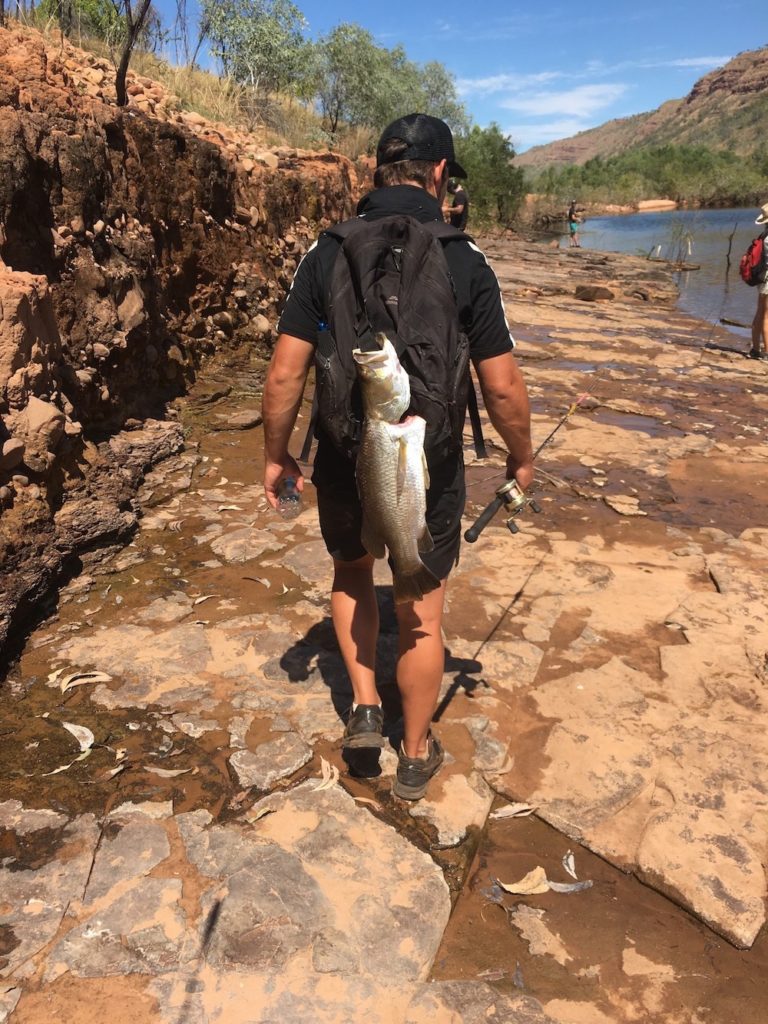 One for the frying pan.

Although it seems like fun and games most the time, a good hand is always lent, whether it be changing over cattle fencing, setting up water piping, firebreak burning or even mowing the lawn. Much like any large property, the ‘to do’ lists seem to only grow. First item off the list this time was a good bit of TLC for the secondary airstrip. With swags, a mower and heap of other items loaded onto the tractor, the few-hour trek began just before day break. Although a slow tractor ride would usually be taken as a monotonous task, the unfolding landscapes that are witnessed keep you forever encapsulated. As we set up camp it was time to delegate a few tasks around the group, and somehow I managed to pull the short straw of hand mowing the airstrip; did I mention it is a push mower that only just makes a cut half the width of the deck? The one kilometer strip was quickly turning into a couple miles from my perspective. Nevertheless, over a few days the area was back up to scratch and we found great joy out of the story telling and Port drinking around the fire each night. 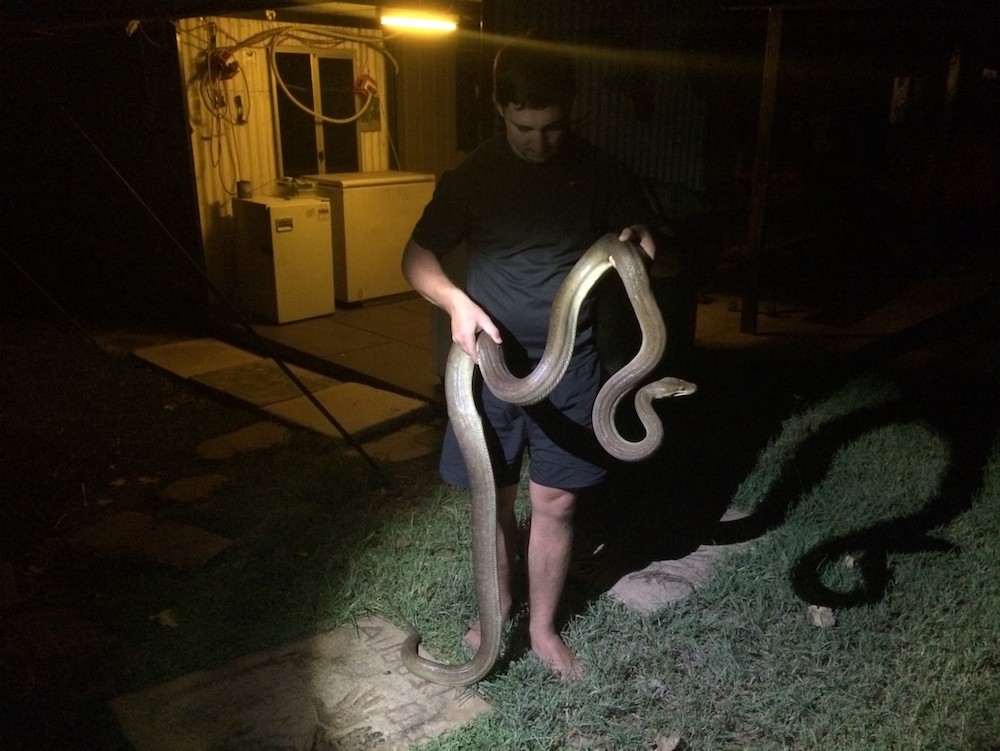 Maria measures in at around four meters. 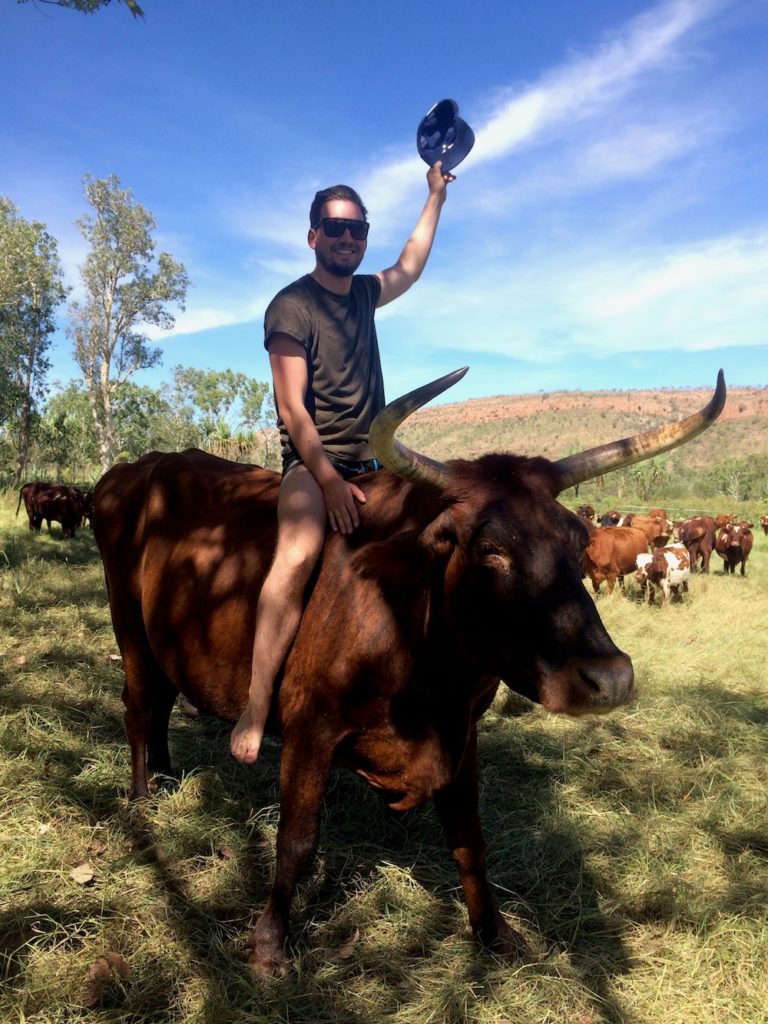 Rebecca trained Kabul to be a draught animal.

On the night prior to flying back into town, a joking conversation turned into a rock-solid plan that we would commit to walking out instead. Knowing full well that this opportunity wouldn’t arise too often, I jumped at the chance and dusted off the old map and compass. As extremely underprepared as I was, we set off the next morning with little more than a fishing rod, the ‘billy’, and a few bottles of rum. Day one of the walk consisted of a few cuts and rashes, but we were more than glad we were out exploring some great parts of what the country embezzles. As we progressed through the next couple of days, meals consisted of a fresh barra on the fire, beds were a canvas mat on a bit of sand and sleep was non-existent, even with the help of old mate Bundaberg (it was freezing!), finding ourselves up most the night searching for more fire wood. Four days later and finally we had reached our intended destination, Explosion Gorge on the outskirts of El Questro Station. Not a bad effort considering our path of exploration was determined by the flip of a coin half the time. As we made it into the main hub of El Q, we took full advantage of the bar having cold beers and ended up with a good crowd of tourists all interested in the story telling of days prior. An experience that will never be forgotten.

Spending time at stations like Kachana gives you an appreciation for the country that we live in and the little gems that are hidden away such as hot springs, indigenous artwork and breathtaking landscapes. It also highlights the importance of the need for conservation, to ensure that we never lose what we have.

I hope to see a few more of these – goodbye Kachana.

< Can it fly? > Reinventing landscape management through regenerative pastoral practices