This year has been a year of extremes. We started with an unprecedented amount of rain and the largest flooding we have ever seen. While rain is always a good thing, it was devastating to see our brand-new paddocks wash away in the rising flood waters.

Cattle that had been painstakingly drafted throughout the year to enable efficient mustering and reliable sales early in the season were spread back throughout the property as fences simply fell over. As the flood waters receded it was still extremely difficult to effect repairs as access was limited and the roads also suffered significant damage.

The 60 kilometre drive to the western boundary turned into a four hour trek that required low range four-wheel-drive and nerves of steel. Even getting in and out on the main road was a challenge. It was helicopter access only till March, and even then the road was only passable to light vehicles.

Once it all dried out though, we did have a fantastic body of feed – which brings us to October. We have just been devastated by one of the largest bushfires we have faced for many years. A stray storm early in the month brought little rain but plenty of lightning. This lit up the tinder-dry pasture and the result was a fire that consumed most of the property. 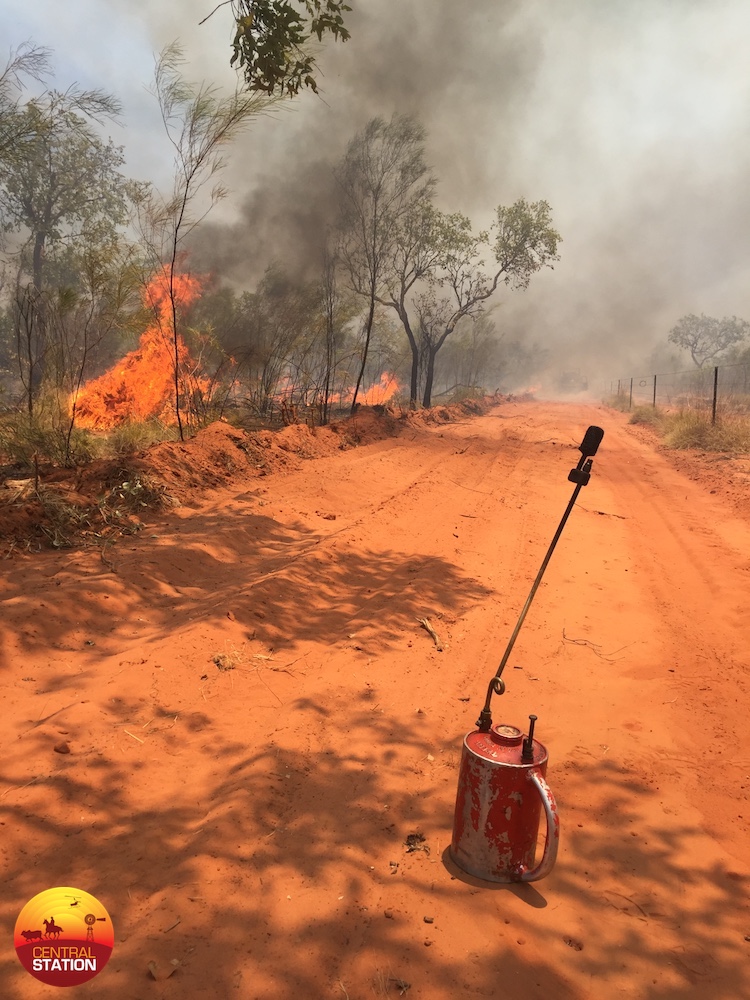 Back burning in an attempt to salvage grass to get our cattle and native wildlife through to the wet season.

It’s going to be a tough few months for people and cattle alike as we now await the onset of the wet. It’s challenging, but that’s life in agriculture. Once it rains – and it will – cows, country and people will rejuvenate.

Anyone who relies on agriculture accepts the inherent risks that come with dealing with inclement weather, ever-changing trading conditions and market fluctuations. What is much more difficult to accept though, is how causally politicians toy with our livelihoods. Whether it’s attempting to shut down Schools of the Air, introducing draconian (and counter-productive) vegetation management laws or the granddaddy of them all – banning live export – it is getting harder and harder to see a future for the family farm in this country.

What makes banning live export particularly pernicious is that this not a move designed with the best interests of the country at heart. It doesn’t even have animal welfare as its main driver. We saw this in 2011 and the politicians in this country are aware of the animal welfare crisis we narrowly dodged, the associated environmental disaster that would have ensued had the ban continued, the economic hardship that was caused, the impact the ban had on rural communities, the personal cost in terms of stress, mental illness and even suicide.

Politicians should know all this and still they will glibly destroy the livelihoods of tens of thousands of rural Australians for nothing more than political expediency. This is purely a strategy designed to appease inner-city Greens who have no understanding of the real issues and animal rights activists who have wilfully deceived and misled the wider public. 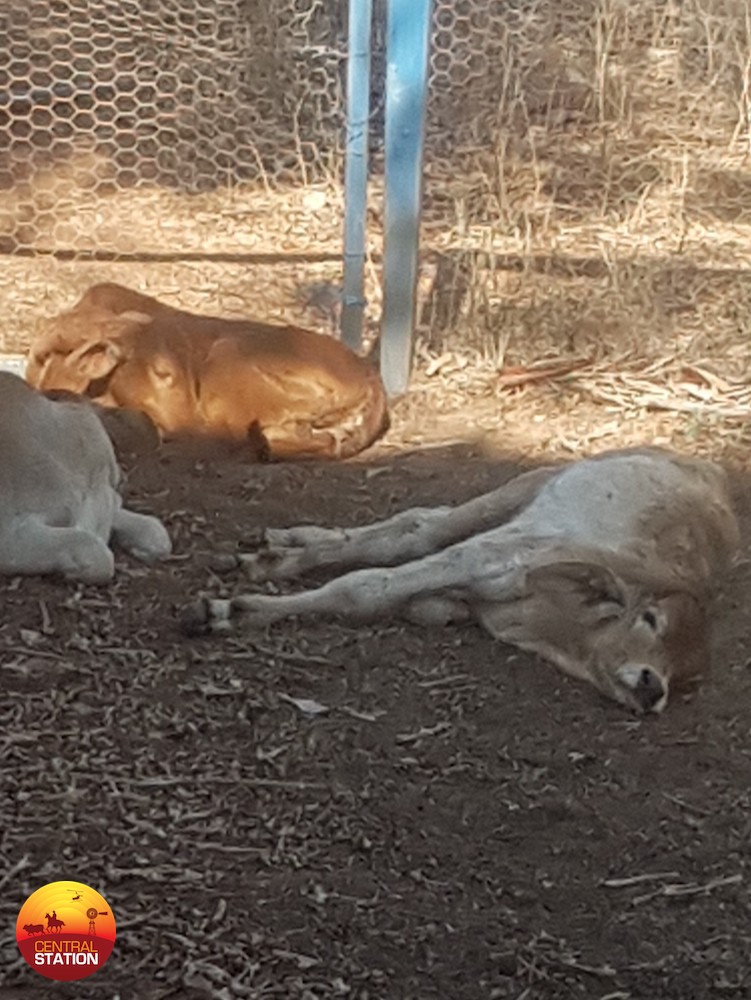 Poddy (orphan) calves. Taken out of context this could be made to look like the animals are poorly treated and suffering.  In reality, they are having a snooze after having been hand-fed their bottles – commonly referred to as a ‘milk coma’.

And the men, women and children of rural Australia will be hung out to dry.

The majority of Australians are now completely removed from agriculture in general and live export in particular.  It is easy to find yourself nodding along with a campaign that only tells one side of the story – particularly when that story is designed around emotive images and overly-simplistic narratives.

Unfortunately, live export is a complex issue and a reasoned, factual counter-argument is much more difficult to convey in 30 second sound-bites or heart-tugging memes. It is very easy to ask a leading question such as “Do you support animal cruelty” accompanied by a distressing image of questionable origin in order to ‘survey’ a well-meaning public.

It is much harder to counter deliberately misleading campaigns that require more than just a click on a ‘like’ or ‘share’ button.  It takes time, effort and commitment to fully understand the whole debate and – let’s face it – we’re all too busy to research every news story we see, particularly when the issue doesn’t directly affect us.

I am as guilty of this as anyone else, although having lived through the storm of one live export ban I have developed a healthy scepticism for what I see on the ‘news’ and a high degree of cynicism for anything I hear from politicians.

I also spend a lot of time thinking about the potential consequences of another live export ban and what it would really mean for Australia. I don’t pretend to know the answers, but I have come up with a few questions.

If live export is banned, the northern beef industry will no longer be viable. Jobs will disappear, businesses that service beef production will fold, people will leave rural towns, services will be wound back as the population dwindles and the downward spiral will continue until only the ghosts and memories of outback communities remain.

Where will everyone go? The only option will be to move to large centres as rural communities wither and die. What will that do to housing and rental prices? How much extra strain will be put on already struggling infrastructure? Will the government commit to building new schools (after all, they won’t have to fund those pesky Schools of the Air any more), or will class sizes simply increase as more kids enter the public system?

What about health? What about pensions? And what about interest rates? If every family-owned agricultural business in northern Australia went broke because they could no longer sell their products, how would that affect the banks and would that flow through to interest rate increases?

In dollar terms, agricultural exports are crucial for Australia’s ongoing economic prosperity. In 2017-18 the total value of beef and lamb exports was approximately $8 billion.  Of this, $1.27 billion (or around 16%) came from live export of cattle alone.

This is tangible wealth that is being created for our nation. Livestock producers take natural sunshine and turn it into real export dollars. It is sustainable, it is renewable and it leads to greater wealth and prosperity for us all. Figures released by the Northern Territory government state that for every 100 direct jobs in the beef industry, there are 36 additional jobs created elsewhere in the NT economy. These figures are likely to be similar for northern WA and extensive beef producing regions Queensland. 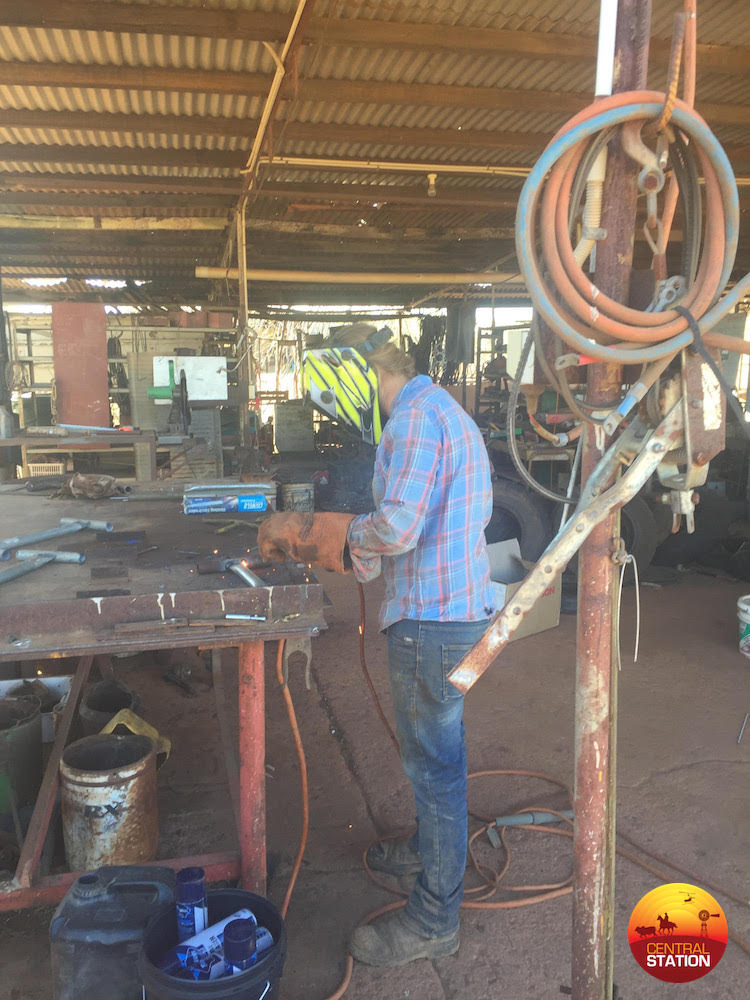 Agriculture provides jobs, training and opportunities for young people from all walks of life. Even those who don’t stay remain in the industry enjoy life-long benefits from the skills and knowledge gained in the bush.

Although we all have very different life styles, whether we live on the land or in the city, we are all inter-connected and we need each other. I firmly believe there is a lot of support for Australian farmers in our cities. You only have to look at the generosity that has been shown for those suffering through this crippling drought to see it.

I understand live export is a contentious issue, but before allowing northern beef producers to become just another pawn in Australian politics, I ask you to please consider there is another side to the debate – a side very few people are hearing.  To that end, I thought I would take this week on Central Station to address some of the myths, misinformation and outright propaganda that often circulate whenever live export is discussed.