Working with your children

I count myself fortunate that we live on a property that is ok with my children coming with me to work. When I had my first child we were managing a station that didn’t allow this and I really struggled with being house bound as well as the idea that my child wouldn’t get to experience what this lifestyle has to offer as they grew up. To me what my children learn with me will be skills they have for life regardless of whether they remain in the agricultural industry or not. 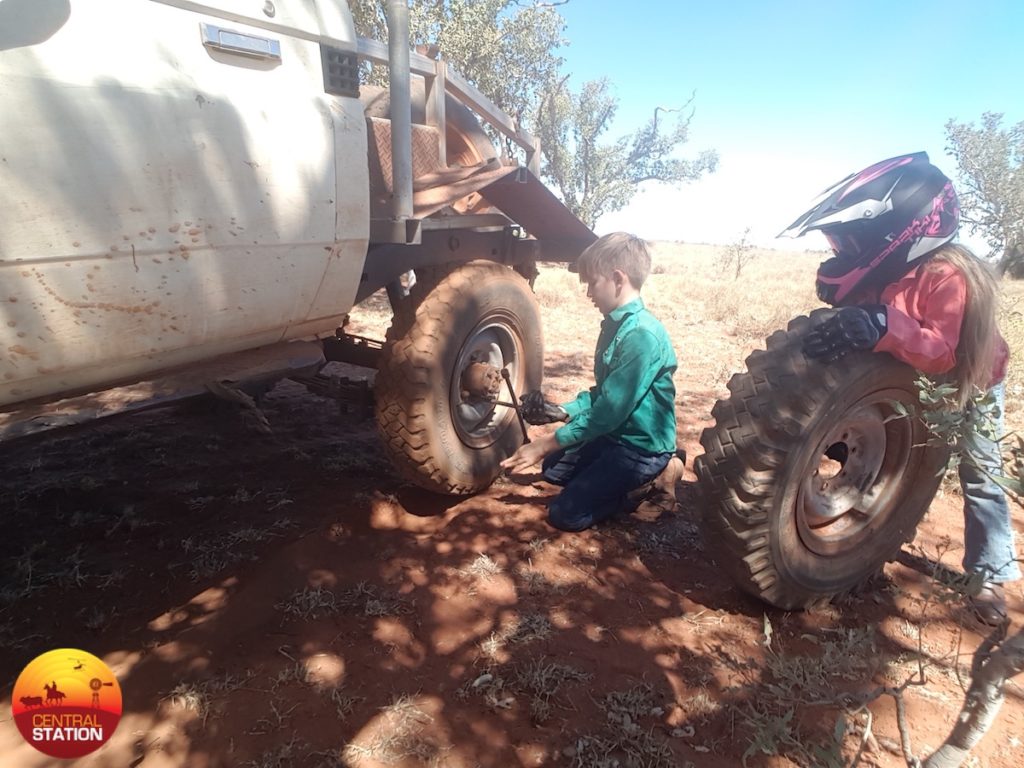 Helping to change my flat tyre on my mustering buggy.

In the first year at Mallina I didn’t get to do as much on property. I focussed on my cooking and home-schooling duties. However, when mustering came around I was determined to fit that in as well. It meant some long nights precooking meals and missing days of yard work so that I could cook while my kids did their schoolwork on the kitchen table where I could also keep an eye on them, but we got there, and I managed to get out for a handful of musters. 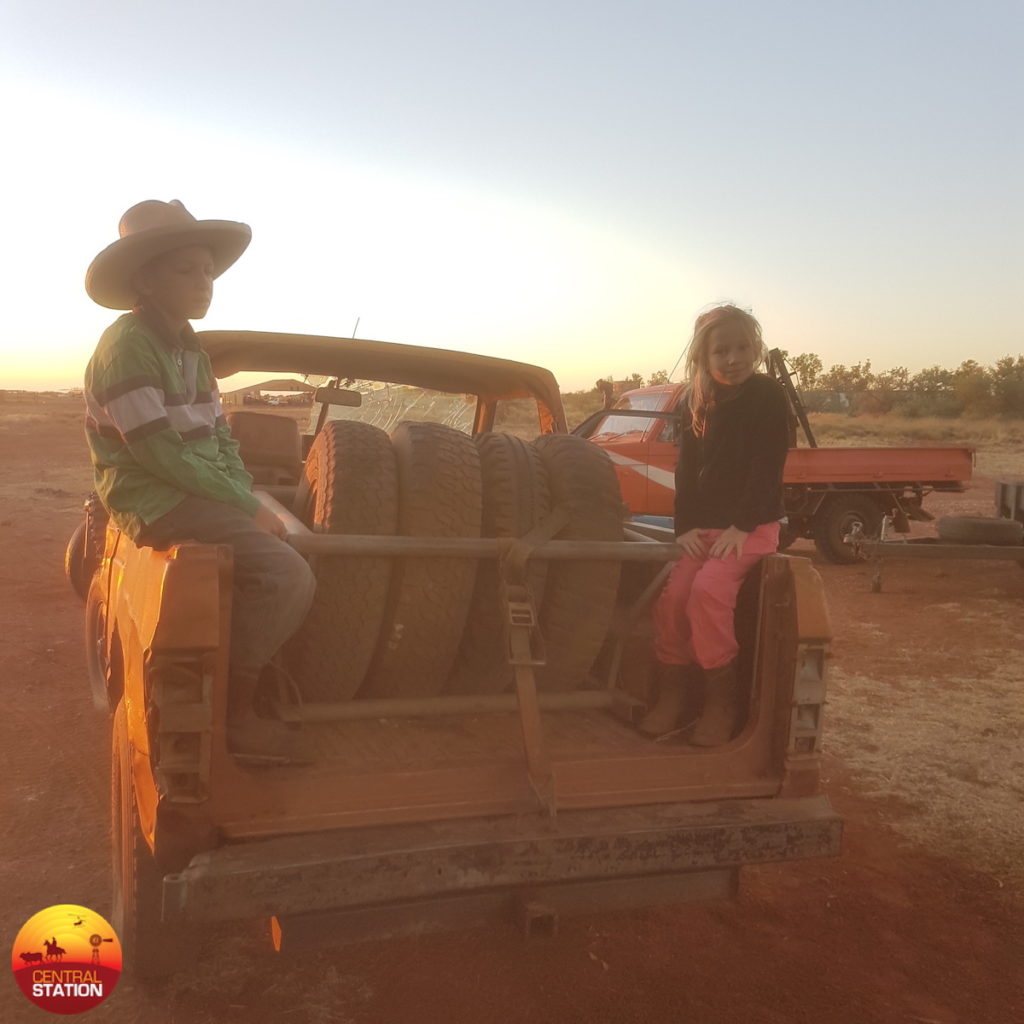 Mustering means early mornings, my kids on the back of The Limo.

The old mustering buggies at Mallina are Nissans and aren’t modified much apart from some bar work and tyre racks. I was given one called “The Limo” which has been used here for years and I am sure it is immortal, given how many times it has been resurrected after a particularly hard muster. My first muster here was at Sticknies, which can tend to be a bit of a wild muster given the area of national park that surrounds it. That year we ended up with a lot of scrub bulls and cleanskin cows. It was a slow start to the muster, we were sitting on a track waiting, while bikes were following some cattle down the rivers. Ben and I had a child each in our Buggies, they would take turns to swap each day we went out. My daughter, Ella, was in with me and she was peeking into her lunchbox while we waited.

“Can I drink my lemonade?” she asks. It was quite early for a lemonade but sure, “We are mustering, it’s a treat, once it’s gone, it’s gone”, I thought. Shortly afterwards we get a call over the radio.

“Buggies, I’ve found something for you to do.” It’s Mark, in the helicopter. He directs us over to a small mob of cattle that he’s brought out of the river and as we get closer I can see what they are, one old bullock who has obviously been hiding for years, three big scrub bulls, two cleanskin cows and one marked cow. Brilliant, cattle that have never been mustered before need a different approach or they will run so we circle out wide and space our selves out around them in the hope they will get used to the vehicles before we have to start putting pressure on them to try and move them. The biggest of the bulls inevitably breaks from the mob before I can get into position and I put my foot down to get around him and wheel him back into the mob.

I learnt two lessons in the next five minutes:

We hit a small contour fast enough to launch “The Limo” into the air and it stayed in the air long enough for me to think, “Hell, this car isn’t going to go after we hit the ground. My first muster here and I’m going to trash my car before we even start.” However, we landed and kept going, “The Limo” still snaking along after the bull as I get used to having turbo in my mustering buggy. I take a quick glance at Ella, very glad that she is strapped in with a seatbelt and she’s sitting tight, staring straight ahead, possibly in fear or shock, with her lemonade still clutched in both hands.

Ben is behind me now and we work as a team with me on the side and him behind the bull to wheel him back into the mob. It was a very exciting few minutes and as we sit still again to let the mob quieten my heart starts to slow down to its regular pace. Now I have a moment I look over at Ella again, she is still staring straight ahead and wordlessly she passes me her lemonade. She is covered in it, her face, her clothes, everything. I laugh and take the can but there is still some in it, about a quarter of the can is left…she seems to be wearing the rest.

“There’s still some in it, Love. Why don’t you drink the rest?”

I take a sip and sure enough there is not a bubble left in that can, it is the flattest lemonade I have ever tasted.

“Ella picked the wrong time to open her can of lemonade” I call over the radio and several peoples’ laugh come back to me.

The rest of that day was pretty uneventful after the morning’s excitement. We got those bulls along with many others back to the yards. Ella somewhat resembled a cheetah later in the day when the red dust stuck to the splashes of Lemonade on her and I quickly became very good at recognising those small depressions in the land that had made us airborne earlier. 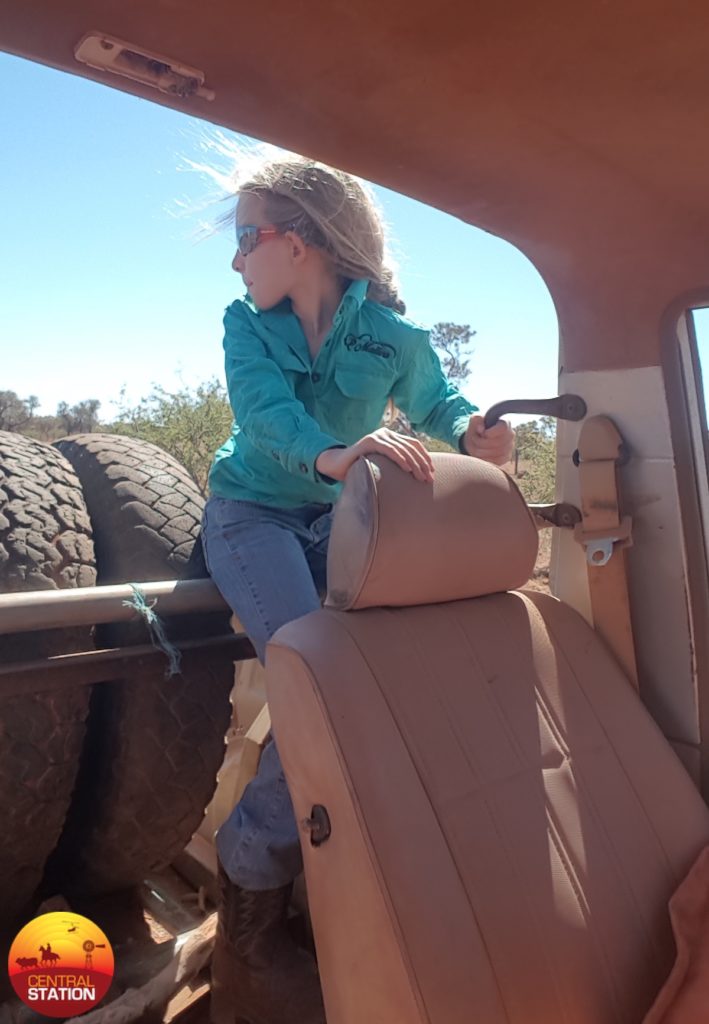 Ella sitting up on the back of The Limo while we hold cattle up at a waterpoint.

Since that first day the kids have come out on numerous musters with us and multiple bore runs over the holidays. They are expert trough cleaners and have helped me to change many flat tyres. 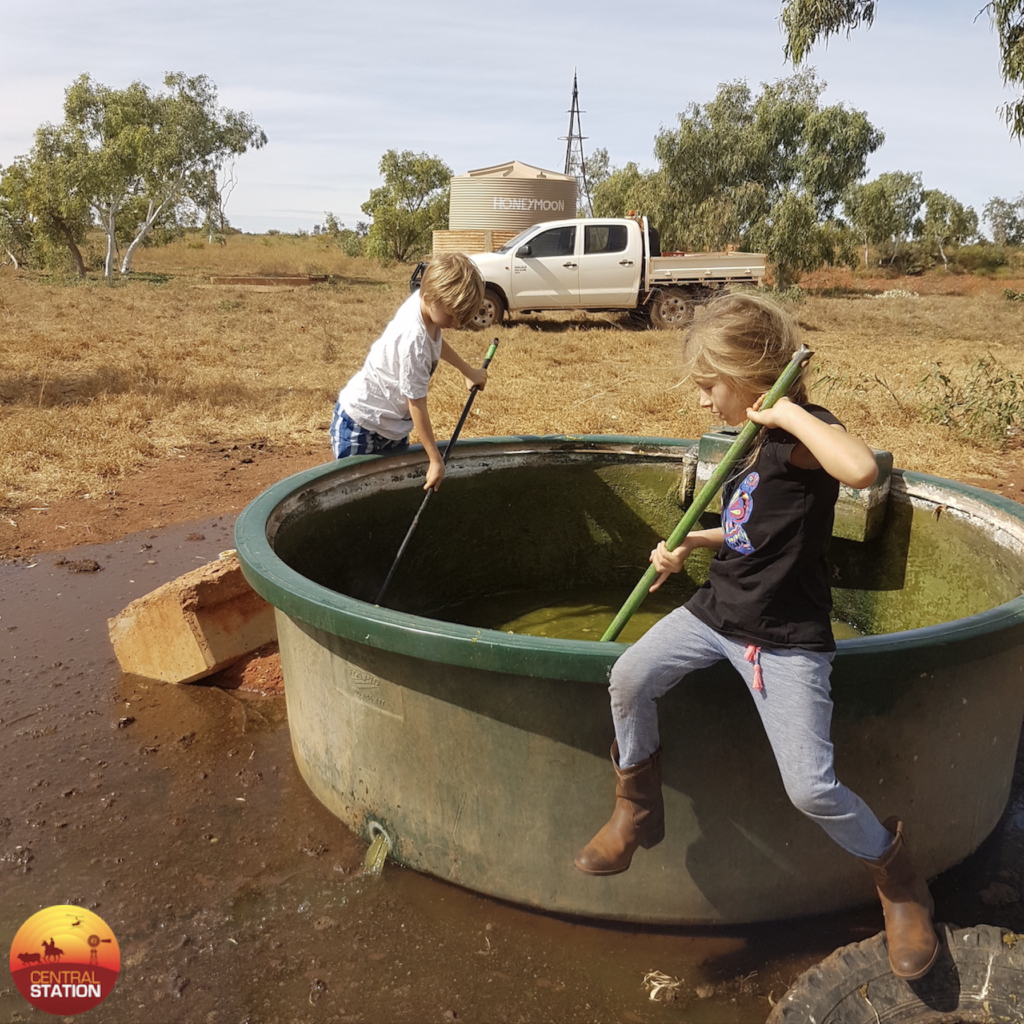 Helping out on the windmill runs by cleaning troughs.

Last year they learnt how to ride my quad bike and on one muster we took it out and left it at the final windmill we would be passing the mob through on the way back to the homestead yards. Ella was so excited to get a chance at working the mob independently. My son, Corbin, is of a much more cautious disposition and he said he’d rather stay in the buggy. I think he was thinking of all the faster work that we tend to do at the beginning of a muster when cattle are fresh and haven’t learnt to mob up and walk along quietly yet, but after watching Ella tail along behind the mob he agreed that he could have done that and wished he had brought his helmet along too.

We walked that mob steadily towards the homestead, bikes in the lead and on the wings, Ben and I in the buggies on the tail with Ella on the quad between us. At one point I had to go up the wing a bit to tuck some cattle back in that were wandering out and as I came back I see Ella is on my section of the tail tucking in the side before heading back to the middle of the tail. One of the things we often have to teach workers that are new to the industry (and even some who are not new) is to watch the person ahead of you and cover their position as well if they have to move up and help the person in front of them. It means we aren’t left with huge gaps in the side that are not being covered and that will then allow cattle to wander off. It made me pretty proud that on her first day on her own my eight year old daughter was working as part of the team.

“Watch out Lindsay, she’s going to take over your job.” Ben quips over the radio.

“I may as well get back in the kitchen!” I joke back. 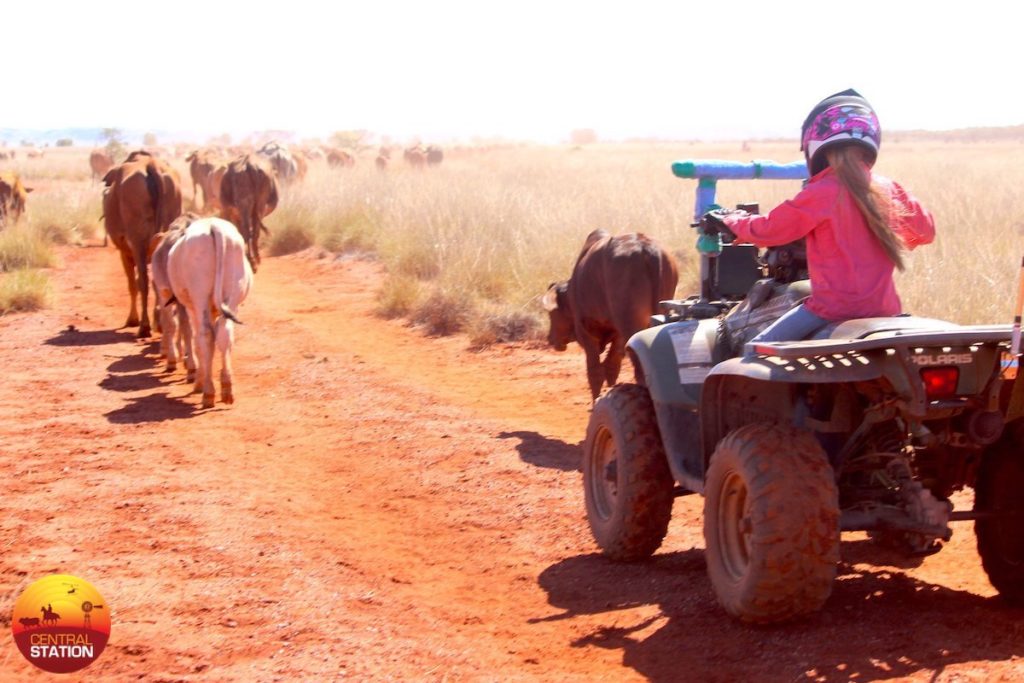 Ella bringing the tail of the mob along on the quad bike.

I am so proud of my children, their resilience, their strength and their compassion for animals. This is the lifestyle that best suits us as a family and I am glad I can share it with them.