The thing that concerned me most about relocating to the Pilbara for the 2018 mustering season was the real possibility of making the acquaintance of the slithering reptiles that inhabit it. As it turns out, it was something much smaller I should have been nervous about.

The day, as I remember it, was warm and dry like every other day that July. The muster had been pushed back, so we were sent out to camp to begin setting up. In between mending tyres and fixing fences we rolled out under the cattle ramp to seek shade from the fierce Pilbara sun. Throughout the day, Josie and Miranda (two vets students visiting from Murdoch Uni), busied themselves cleaning troughs around yards. Meanwhile, I did my best impression of a capable station hand while trying to re-route the sprinkler system so that we could begin watering down.

Not long after we’d headed back to work after lunch, the girls asked me to give them a hand removing a bung at the bottom of a trough. Bung removed (with minimal swearing), the water poured out and pooled around the base. That’s when a small, multi-legged creature caught my eye.

It was the most unusual centipede I had ever seen. Its black and orange stripped body was surround by several pairs of fluorescent turquoise legs. The little critter must have been happily residing under the soil surrounding the trough before we rudely decided to flood its habitat. Eager to point out the unusual creature to Josie and Miranda I extended my right leg and nudged the insect with my boot. They acknowledged my enthusiasm for the strange bug by oohing and ahhing before picking up their brooms and setting to work on the inside of the trough. 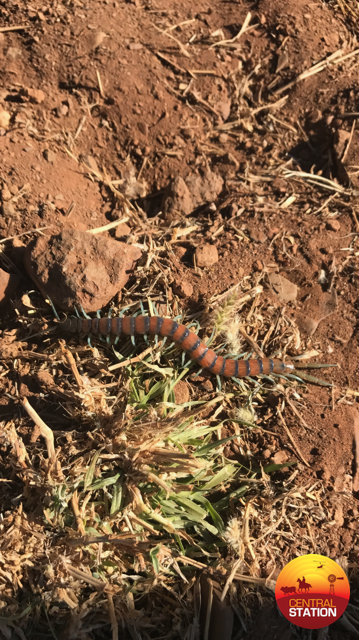 What an unusual centipede.

Not five minutes later, on my way back to the top of the yards, I felt an almighty bite beneath the big toe on my right foot. I screamed out in pain and began madly hopping about on one leg, clutching my foot to my chest as I tried to wrangled it free from my boot. The pain was so intense and so immediate that I was sure that I must have accidently stepped on an unsuspecting snake, my worst nightmare. Both Miranda and Josie came running to my aid (bless them), just as I managed to wrench off my boot. To my horror, my foot wasn’t the only thing to emerge from my shoe, the centipede I had seen only moments before came flying out after it. The little bastard must have jumped aboard my boot when I nudged him only moments before. ‘Take a photo of that thing!’ I screamed at poor Miranda amid a barrage of words to rude to repeat here.

As Miranda bent over to snap the creature she assured me ‘oh yes that’s quite poisonous but I don’t think it will kill you’. ‘Thank you Miranda, wonderful, that’s just what I need to hear’, I thought to myself.

Within moments of being bitten an excruciating pain began to travel up the inside of my right leg and into my groin. It left me bent over, howling in pain and clutching my groin like a child that’s just wet the bed. Hysterical, I tossed off my other boot and leapt into the nearest water trough in hope of some relief. With no phone or radio reception, Josie and Miranda looked on in a state of bewilderment.

It was unfortunate that Annabelle chose this moment to appear. If I remember correctly, I looked up at Annabelle through teary eyes and exclaimed ‘this is what it must be like to give birth!’ while madly thrashing around in the water like a drowning rat. As someone who had recently given birth, Annabelle looked at me with amusement and suggested I stop flailing around in the trough and show her the bite. Meanwhile, Miranda dutifully produced the photograph of the offending creature at which point Annabelle was able to confirm that no, I wasn’t going to die, but that it would be ‘bloody sore for a while’.

Annabelle kindly bundled me into her car, sopping wet and snivelling like a kid. At this point, with the pain continuing to intensify, I was rather sure that death was imminent. Not before long, Ann, Annabelle’s Mum, came to the rescue with a calm demeanour and a dry set of clothes. Take my word for it, if you ever find yourself in trouble on Yarrie Station, Ann’s face is the first you want to see. Lucky for me, Ann’s lovely friend Mina, a former nurse visiting from Perth, was also out at camp. Mina quickly set to work checking my vital signs, worried that I may be having an allergic reaction. It was quickly decided that it would be best to drive me back to the homestead where the Royal Flying Doctor service could be contacted for further advice.

Tanami, Annabelle’s 11-month-old daughter was strapped into the back seat and away we went. Conscious of not wanting to upset Tanami, I did my best to keep my squealing and heavy breathing to a minimum as I sat in the front seat with my right leg outstretched across Mina’s lap. During the hour and a half journey, Ann regaled me with stories of others who had been bitten by the same nasty critter and had lived to tell the tale. Unconvinced that anyone could survive the pain I was currently enduring, I stared out the window in misery. Not long in to our journey, Tanami became restless and no doubt frustrated that I was absorbing all adult attention. To distract her, Ann began reading aloud Edwina the Emu in what can only be described as a wonderfully accurate impression of an Emu on the hunt for meaningful employment. A real highlight in what was an incredibly uncomfortable trip back to the homestead.

When we reached the homestead I was carefully helped inside, hoping on one leg with my arms around Ann and Mina. Feeling very sorry for myself, I sat at the dining table while Ann and Mina had a long conversation with the RFDS. Listening from the adjoining room all I could hear was Ann saying the word “CEN-TI-PEDE” repeatedly, as though the doctor on the other end of the phone was having a hard time believing such a small creature could cause such a fuss.

As I waited, still convinced that I was living my dying hours, I stuffed myself with an assortment of lollies kindly gifted to us by Kent Saddlery, it wasn’t a pretty sight. When Ann and Mina returned, they handed me a very large fistful of pills that I swallowed obediently, hoping for some relief. The next few hours passed fairly uneventfully, and I came to accept that I probably wasn’t going to die of a fatal centipede bite. I tried to regain some of my dignity by sitting quietly in the gazebo and waiting for the pain to subside.

Just as it was getting dark Annabelle reappeared with a healthy sized nip of whisky to bolster my spirits. Soon after the fiery heat hit the back of my throat the pain began to lift almost immediately. What a day!

The moral of this tale? Wear gaiters. 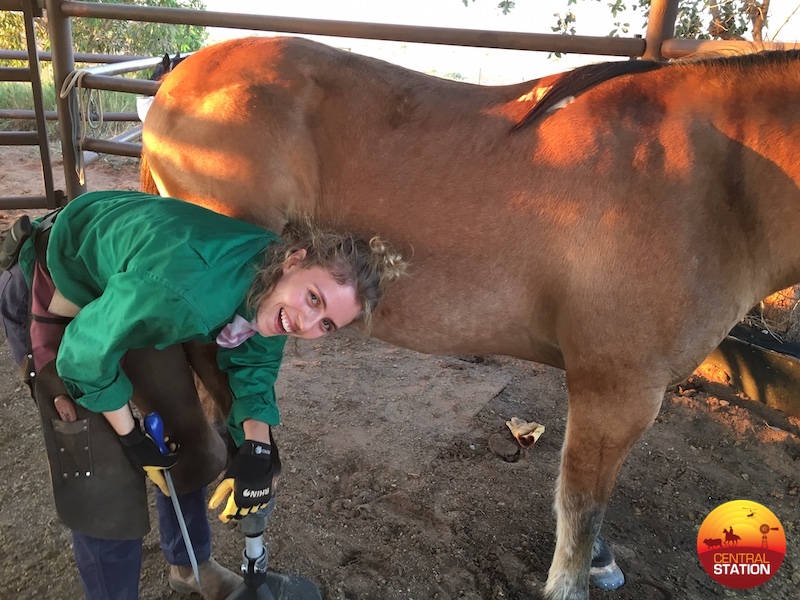 Back on my feet!

< There, and back again > Lessons learned in the Kimberley