Over the Easter weekend we decided to take the kids out for a nice family ride for the first time. The result was not quite what we hoped for… instead of the nice fun little walk past the billabong, around the house and back to the horse yards, it ended up with everyone having to walk halfway back to the yard with only one of the three horses we started out on.

Before I tell you this little story let me introduce you to everyone. We have Troy and myself (Mon) and our two kids. Marlee, aged two and half, is a keen little horsewoman with a great love for animals and adventures. Then there is Wade, aged 8 months, who is a happy, cheeky little boy that wears a constant smile and shares the love of adventures.

Now for the horses in this story, we have Jandals who is Troy’s big, beautiful and kind-hearted work horse who likes to act like he is a grumpy, lazy old man. It’s only when he is at work lapping a beast around the flat does he remember that he is not a grumpy old man, but that he is in his still prime and he is also Maximus’s best friend.

Fancy is my little mare, she is a bit of a tart, very smart also snarly and slightly opinionated but she reads my mind and I read hers, I love her to bits and trust her unequivocally.

Finally we have Maximus who is Marlee’s little pony, he is a very kind little tucker monster that is amazing with both kids and we all love him. We couldn’t be luckier to have him as their first pony. He also loves Jandals and follows him everywhere.

On the Sunday morning we headed up to the yards to go for a ride. While Troy ran the horses in I got the kids and gear ready. We start to saddle up and Troy’s fenders are not on his stock saddle so he decides now would be a good time to try out his new roping saddle, so he pulls it out of the shed and puts it on Jandals. We are now all saddled up so we get on and head off for a ride, Troy on Jandals who is leading Marlee on Maximus and me on Fancy with Wade in the front pack.

It was our first time all going for a ride together so we decided to keep it simple – stay in the house paddock and follow the road down through the sheds, past the billabong, around the homestead and back to the horse yard. This is probably about 1km all up.

It all starts off well. We make it through the sheds and say hello to our cook, grader driver and one of the ringers as we ride past the kitchen. As we get down near the billabong Marlee decides she wants to go adventuring off the road and go down to see the water, we tell her we will just stick to the road and look from there but no she really wants to go to the water so we decide “why not, what harm can it do to take a little detour its only about 50m away?”.

We swing off the road and rather than going directly through the grass we follow a little dried up creek down as it’s a bit more easy going for Marlee on her little pony. We have made it about half way there when there are a couple of branches in the way and the ground was starting to get a little bit sticky so we decide the adventure is over and we will turn around and go back to the road. Little did we know the real adventure was about to begin.

As Troy is turning Jandals around his back legs sink into the dirt a little and Jandals is a bit unimpressed about so he rushes into finishing his turn at which stage the lead rope ands up right up under his tail and this makes him more unimpressed about the situation. He jumps forward a bit, and as I said earlier Troy is riding in a new saddle so its all sitting a bit different than the trusty old stock saddle. So, as Jandals jumps forward he cops a spur in the guts, at which stage he decides he has had enough of this and gives an almighty jump forward and sucks back hard leaving Troy who is usually quite a sticky rider and will ride most things, outlaid out on ground at Fancy’s feet in front of Wade and I.

Jandals proceeds to through in a couple more bucks before starting to trot back to the shed. While Jandals is in the process of packing his tantrum and bucking his way away from us, Maximus with Marlee aboard starts to walk off after him. As this is happening I say to Troy who is currently picking himself up off the ground to quickly grab Marlee’s lead rope before Maximus starts trotting off but Maximus trots off just as Troy reaches down for the rope and he misses it by a couple of inches.

So we now have Wade and I still on horseback, Troy on the ground and Marlee on Maximus trotting off after Jandals who is on his way back to the shed. Troy quickly runs off after Maximus and Marlee, and Maximus now being chased by Troy and wanting to catch up to his mate trots faster with Marlee bouncing along as little kids do when they are trotting on their ponies. Troy manages to catch up just enough that he is able to reach out and grab onto the side strap of Marlees helmet at which point she turns around to see what is going on and with the combination of everything that is happening falls off.

Troy, still holding onto her helmet is able to steady her fall slightly but she still hits the deck with a thud. Meanwhile Wade and I are still sitting in the creek on Fancy, I go to walk out so I can get to Troy and Marlee and make sure that everyone is ok but decide rather than tempt fate, I end my ride there and get off and walk out on foot.

Eventually I catch up to Troy and Marlee who are heading off to catch their horses, there is a few tears from Marlee as you would expect but she is ok.

Halfway back to the shed we caught up to Jandals and Maximus who have been caught by our cook and one of the ringers and both Troy and Marlee get back on to finish the ride back to the shed. She ended up with a couple of big but little grazes that she loved looking at in the mirror and they made her feel pretty tough and would tell me that she was brave but thankfully she was not fazed about the whole thing and still loves riding her pony nearly everyday of the week.

She will ride anywhere that I take her except on the road past the billabong or in Marlee’s words “not going to the biggerbong, cause Marlee and Dad fall over on Jandals and Maxi down there”. 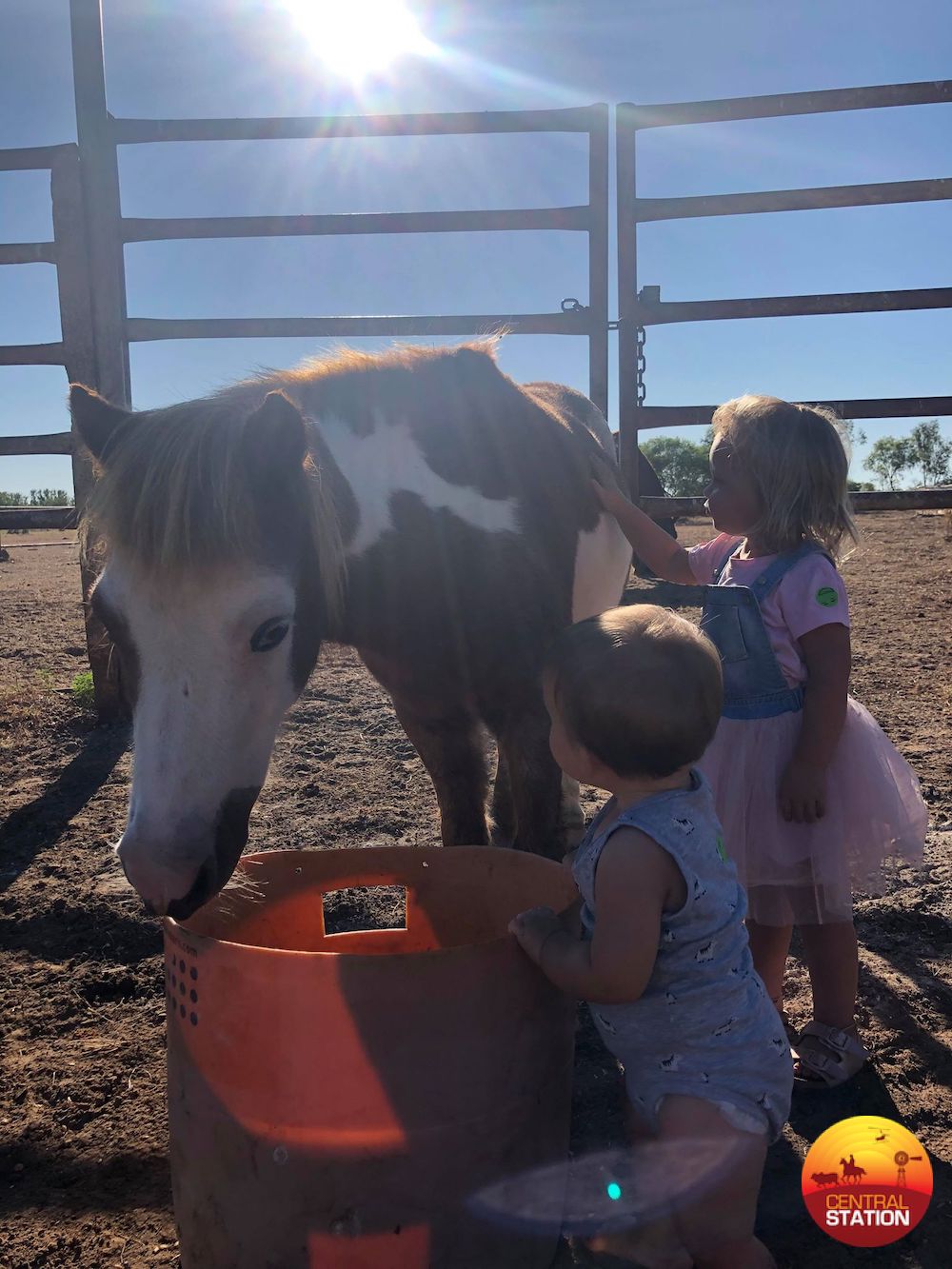 Marlee and Wade with Maximus. 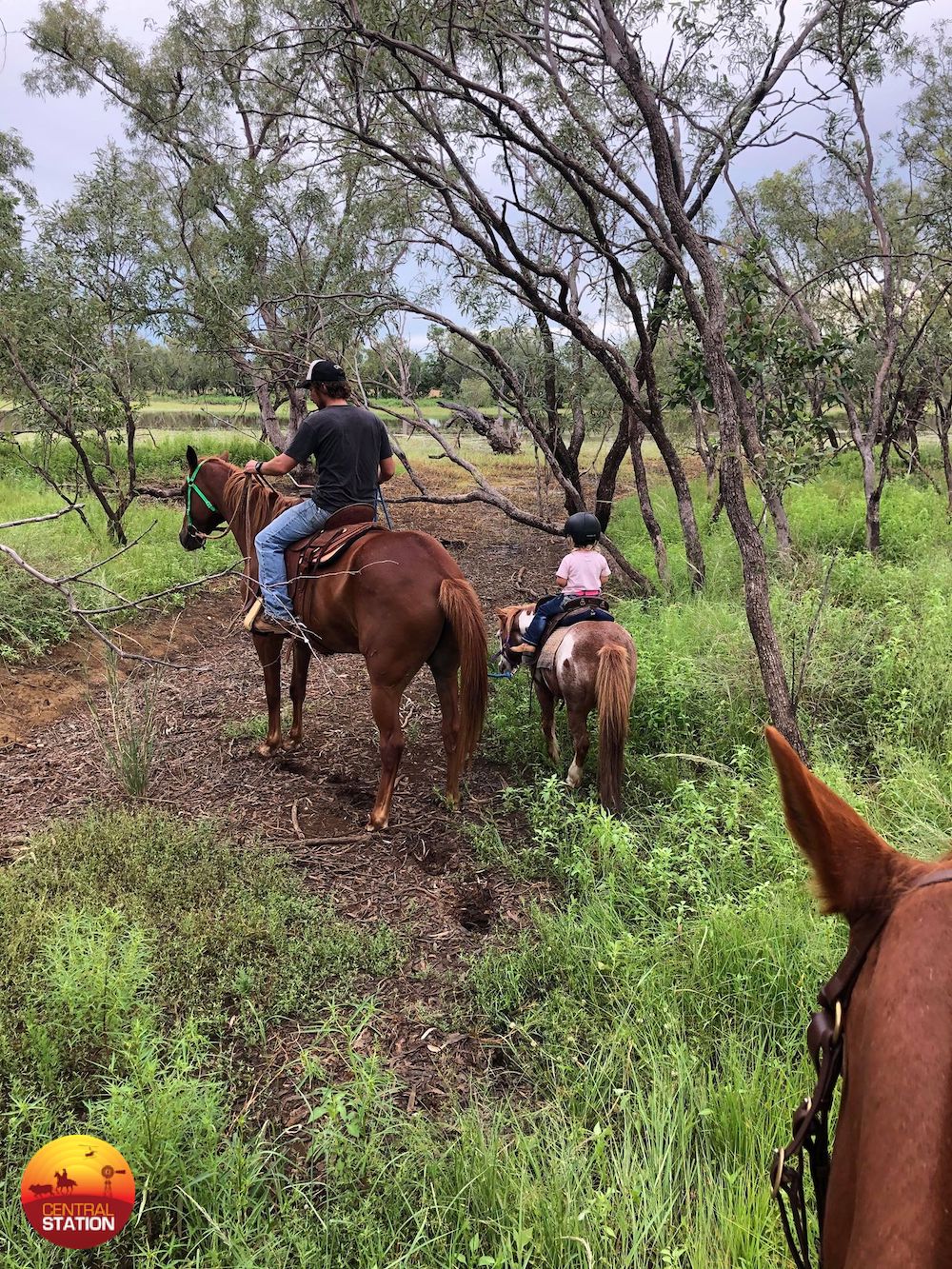 Troy and Marlee in the little creek moments before the excitement happened. 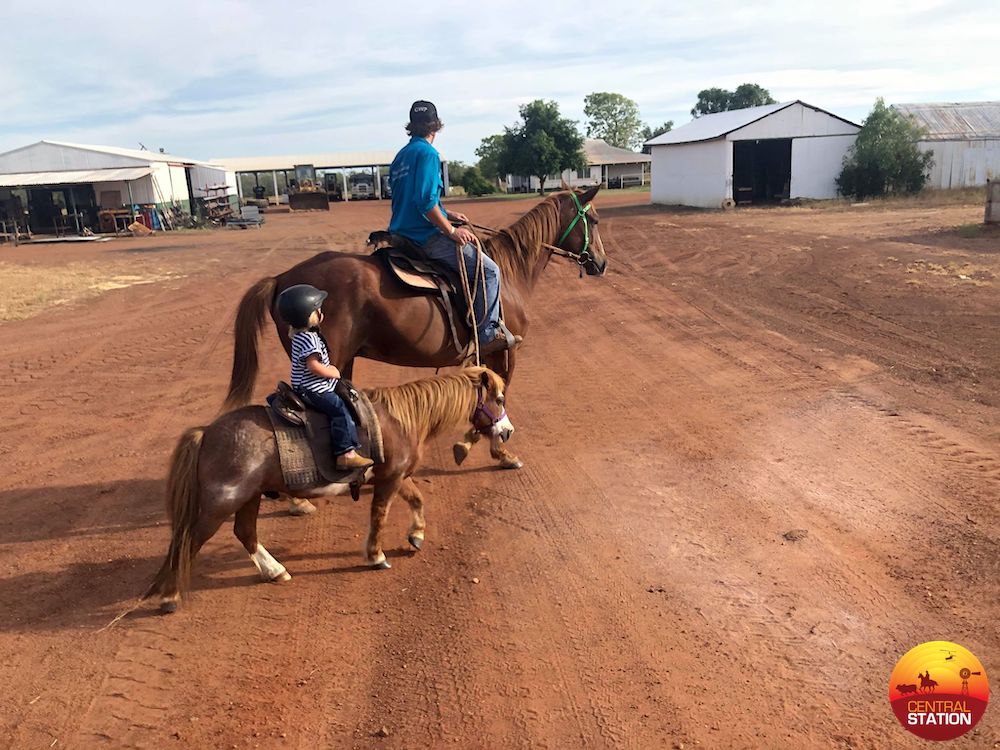 Troy and Marlee riding past the sheds on our second and successful attempt at a nice family ride. 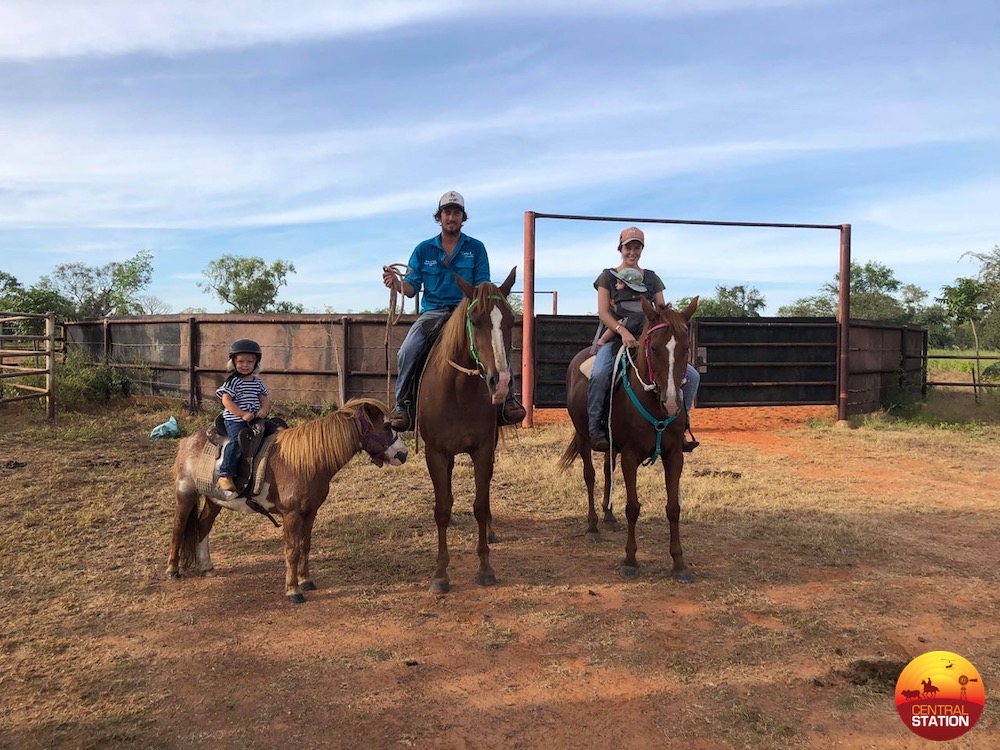 Marlee, Troy, Wade and Mon on Maximus, Jandals and Fancy.

< Stepping up during a crisis > School fun, in the middle of nowhere