Lives and homes were under threat as Cyclone Kelvin was due to cross over the coast South of Broome somewhere!! As the warnings were being listened to on ABC radio and social media pages it was clear that our station which boundaries with Mandora Station to the south and Frazier Downs Station to the north was going to be in the firing line or at least one of us three were going to be hit.

What goes on in the middle of nowhere? There are many people who live on stations and certainly not as many over the wet season as the dry season. However cyclone preparation is taken seriously and all measure to contain and protect the environment, our animals and the personnel working here are taken.

Living in the Australia’s north by the coast during the wet season exposes us to the possibility of cyclones passing by. After all, we rely on the wet season to deliver us our rainfall so the grasses will grow to provide feed for our cattle. Generally we are fortunate that most of the tropical storms burn out over the water and with a bit of luck gives us heavy rain and a bit of wind.  However, if they manage to form into cyclones there is usually plenty of time to get organized. 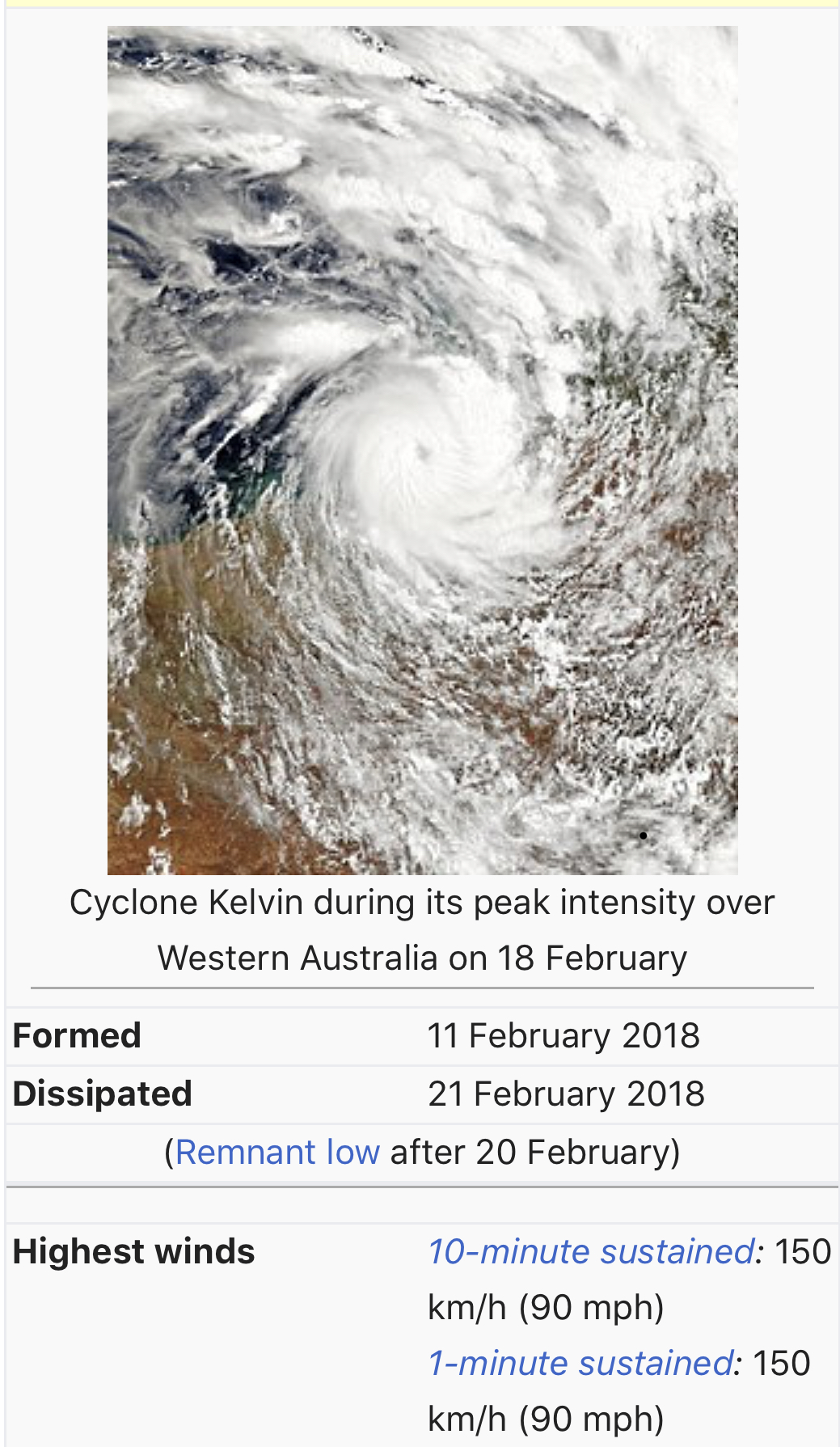 In no time at all the homestead was packed in with everyone on the station and half our supplies from the kitchen and storeroom. Even a portable generator ready incase we lost power for the fridge. There was a hive of activity and nervousness as we all were together.

The radio was on and we were all listening to reports as they weather bureau was getting news at hand. The cyclone was downgraded to a category two so a few of the crew decided to head back to their accommodation for the evening with instructions to meet up at the main homestead for breakfast.

By crickey! In the morning the wind started the rain was falling and boy oh boy was it nerve wracking. Some of the crew had come up for breakfast but three were unaccounted for.  By the time we thought to go and get them I remember the sliding door opening and there was nothing surer that I was not going out into the wind and rain.  I could see some carnage happening around us as trees were falling, puddles everywhere and the noise was something else. 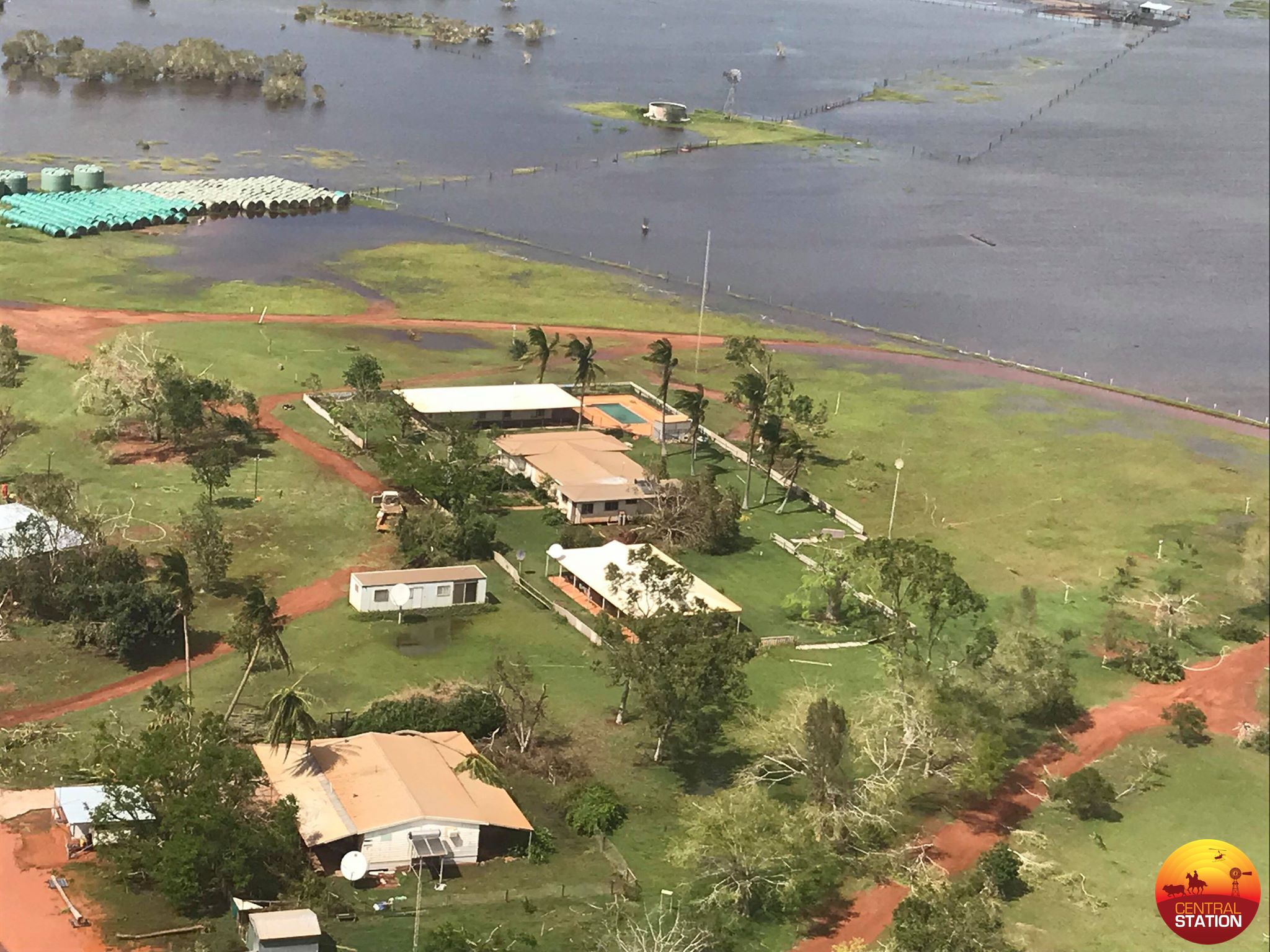 Anna Plains Homestead from the air.

It was calm, dead calm, as the wind had stopped and just a drizzle of rain and an eerie feeling knowing the eye of the cylcone was over us. At this stage we had a look around and had seen damage to trees and a few buildings, knowing the back end of the cyclone was going to come.

It came with a vengeance, something I had never experienced before.  The rain was pelting and the wind was ferocious, hitting the walls horizontally and pouring through the bedroom cornices of the main homestead causing flooding. At this stage it was scary not knowing when Kelvin would stop or what would come next.  We could see debris flying across the homestead lawns and puddles were soon turning into lakes. The Wind. OMG the wind, it was howling, screaming and relentless to the point we could not hear each other talk.

Finally there was a reprieve and we were able to get out and assess the destruction of Cyclone Kelvin and how all the many years of hard work in a heartbeat by Mother Nature were destroyed. We were fortunate no lives were lost but were very worried about of cattle and how they had faired. 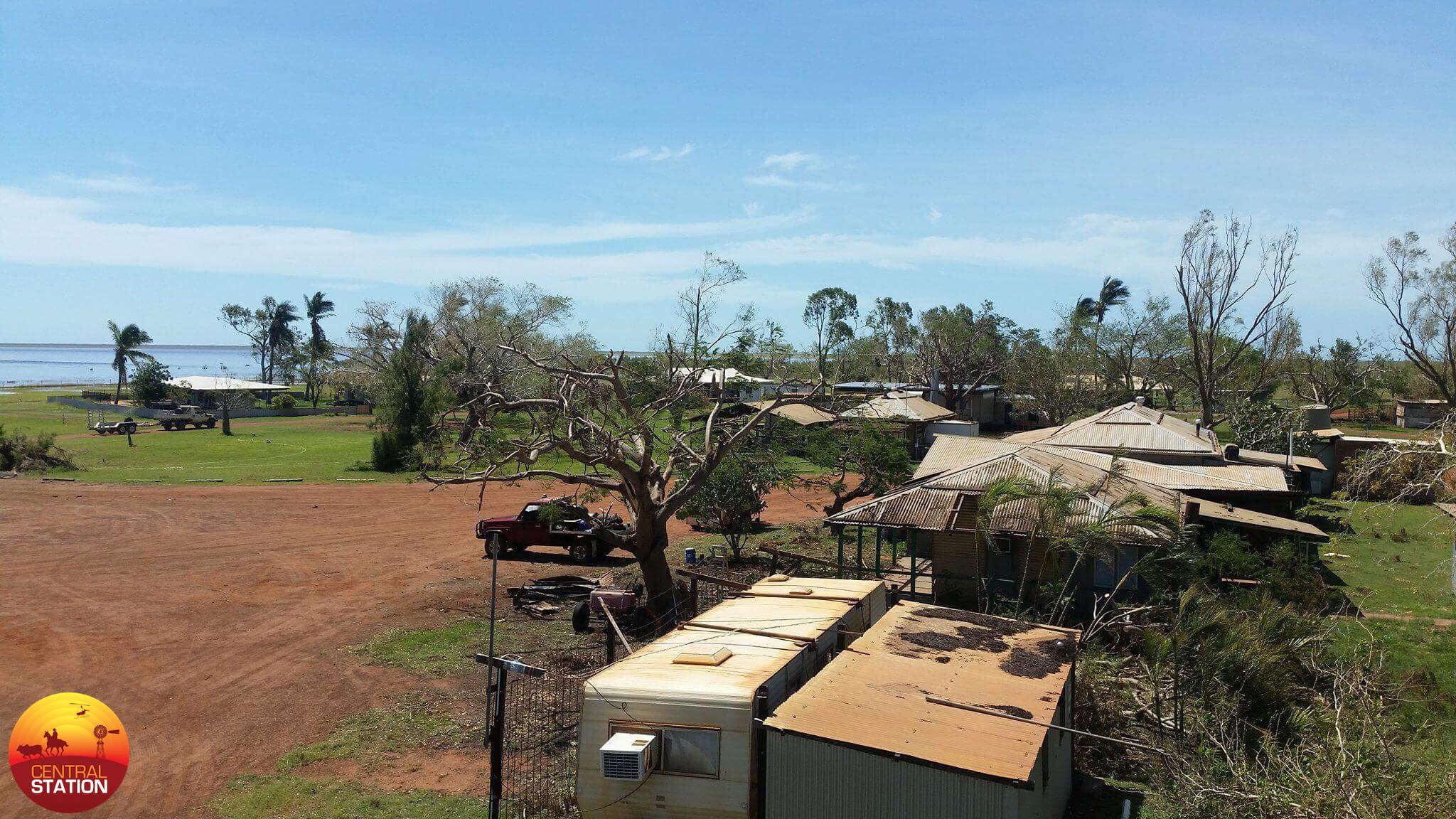 The Department of Fire and Emergency Services (DFES) were onto us in a flash and responded with fresh water deliveries as power had been lost and they flew out an electrician from Broome to fix power supplies. The service was outstanding and we are grateful with the response not only once but a number of times after the effects of the cyclone to help with making sure that were safe so that we could continue working. 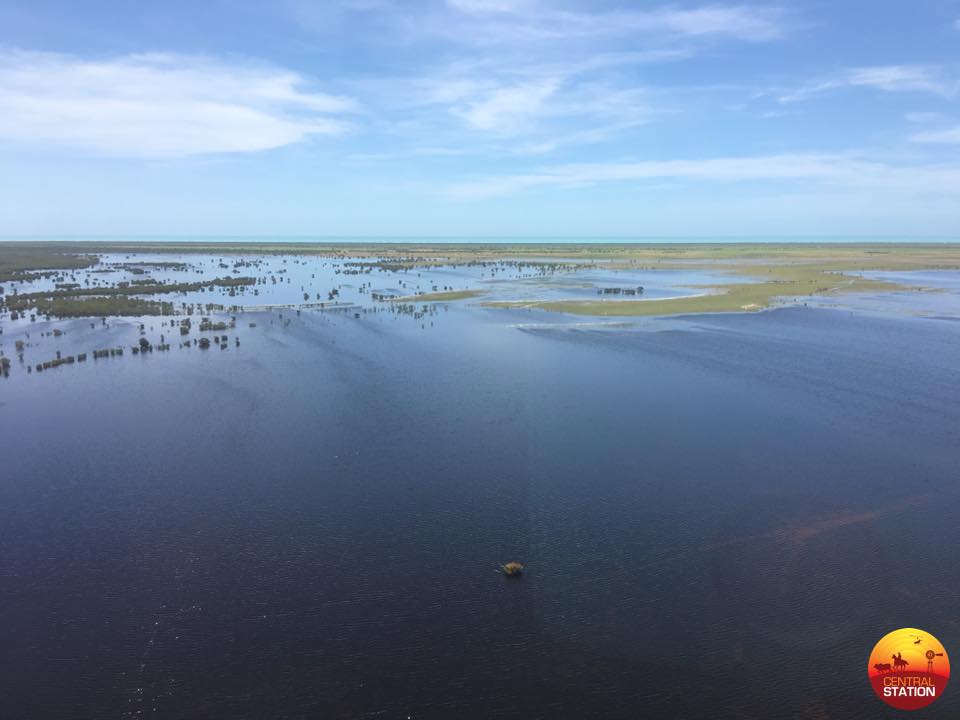 DFES took me up in the helicopter to view the water and to check on the livestock whom had appeared to have settled on high ground in the dunes and were luckily in good shape. As I flew into the homestead the chaos and destruction was evident everywhere. I looked and I knew it was going to be a long clean up process to get the area we call home back into shape and ready for another year of cattle work in front of us. 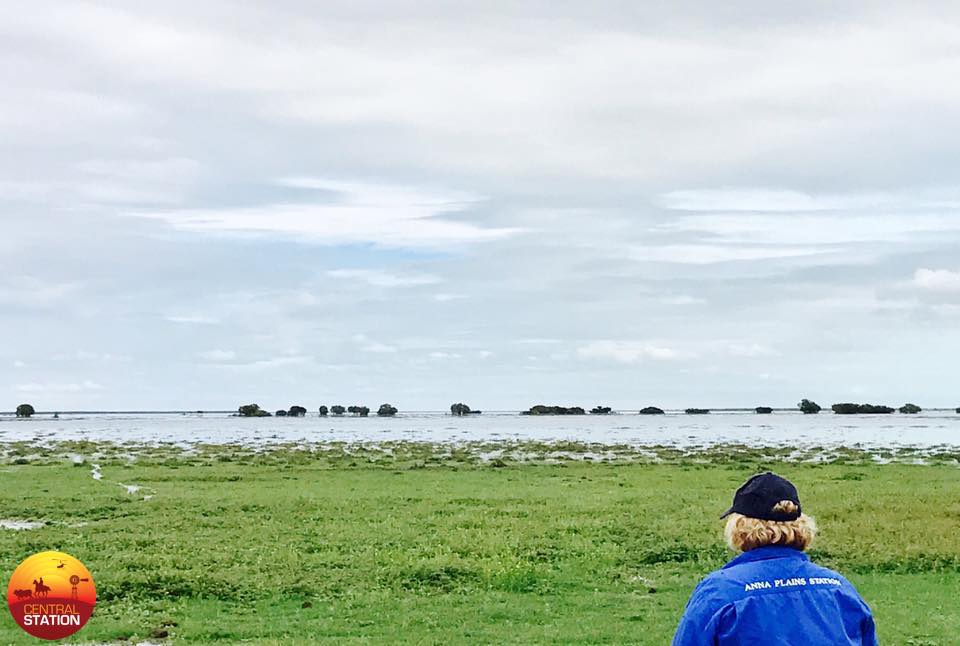 Looking over the flooded plains.

The new crew arrived and they were busy with operation clean up and fortunately one organization from Broome, Toyota, came with many of their workers to help us clean up the homestead with chainsaws and dragging of debris to the tip. They also got a Ute out of a bog that the Boreman had done trying to get out to check water in tanks for the rest of our cattle. A mission and a half and they did it. 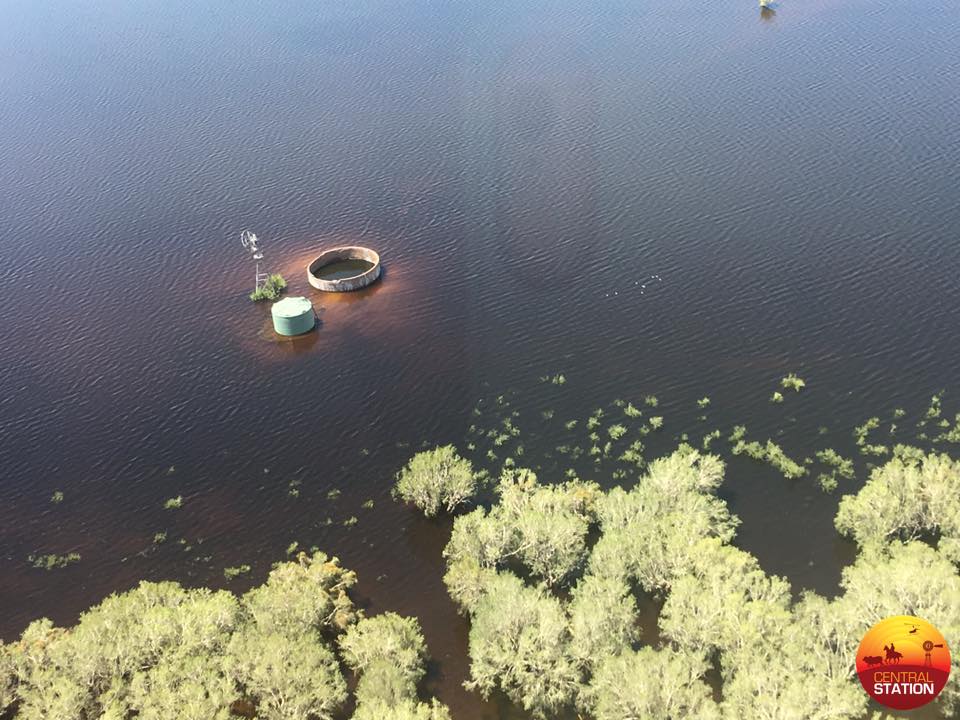 After 8 weeks of clean up and all of the crew exhausted and tired, the homestead was once again looking in order amongst buildings that needed repair or replacement, we were looking forward to the cattle season starting but had to work our way out on the highway to get through our property for further months as we waited for the floods to subside.

Cyclone Kelvin left us with a bitter sweet taste as we worked through many processes to rebuild staff accommodation and with many things left undone and processes which we are still waiting on to continue our rebuild.

< Taking the leap > In my blood and under my skin