Our first managers job was in 2012, just up to road from Miranda Station at a place called Inkerman Station working for a company called Gulf Coast agriculture.

Nothing could have prepared us for our first 2 weeks. Most of it was spent cleaning. And we did some serious cleaning! By the end of our second week we had the sheds looking how we wanted.

It started to rain by the end of the week and we had no idea what was in store. It rained heavy and steady for 5 days straight. By day 3 we started to call our contacts trying to figure our how high the flood waters got at Inkerman. Everyone assured us it has never been through the sheds… It went 2 ½ foot through the sheds…

Day 3 was spent moving things to higher ground. We had a tiny tinny with a hole in the bottom and no motor, but we filled it up and walked beside it. There were generators sitting on tyres in the sheds, and we turned the power off and tried to get them up higher. We managed to lift them up another level of truck tyres by using a trolley jack. That night we agreed if the water got to the third stair on our house we would turn the generator off and move over to the kitchen. Little did we know this would occur 4 hrs later at 11pm.

Ken said he would go out on his own but there was no way I was letting him wade chest-deep in crocodile infested waters on his own in the pitch dark with a massive storm smashing us. “What if he didn’t return… what would I do?” I asked myself. Would I go out and look for him and risk a similar fate? So, I figured if we were going to go down, we would go down together. So off we set to turn the generator off with our torches and a whole lot of luck. Somehow we managed to find the road that went over a drain, as if we had fallen in that we would have both been swept away. I remember that feeling of absolute fear. We knew there were crocs in the water. The waterhole behind the house had a 3-metre salt water crocodile that we later discovered. I think back to this time and wonder why on earth we risked both of our lives for a generator.

We spent the night in our house and moved over to the kitchen the next morning. We set up a generator on the veranda and opened up the owner’s garage. We took his boat and trailer out that were beginning to float. Ken got the motor running and we used that boat from then on. We had the BBQ set up on the veranda and took all of the gas bottles upstairs so they didn’t snap the fittings off. We set up a cake of soap on the entrance stairs and had no other option but to sit it out.

On day 5 a chopper flew over the compound so we jumped in our boat and headed over to the sandridge he had landed on. He was just there checking up on us to make sure we were ok. On our way home that day Ken hit a star picket that was randomly stuck out on the flat and ripped a hole in the boat which ended our boating adventures fairly abruptly.

The waters peaked on day 5. It was smack on 1 meter through the compound. It was lapping at the doors of the boy’s quarters and 3 other cottages we had. The only building it went through was the office. Luckily, the water was also very clean, so it left no mud or dirt on things. 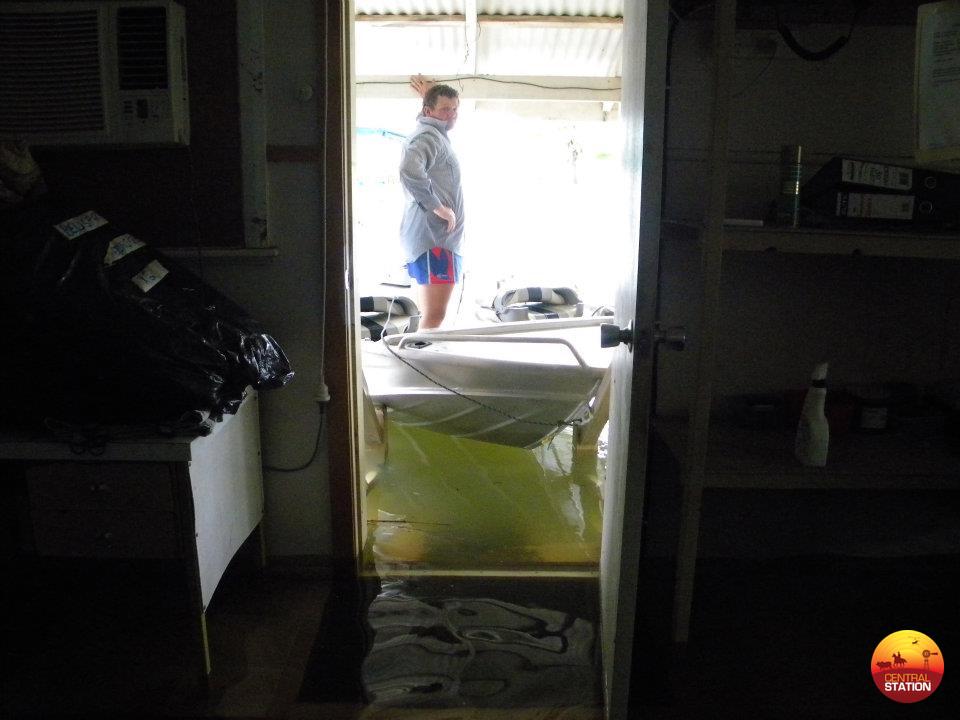 Picture from our office. 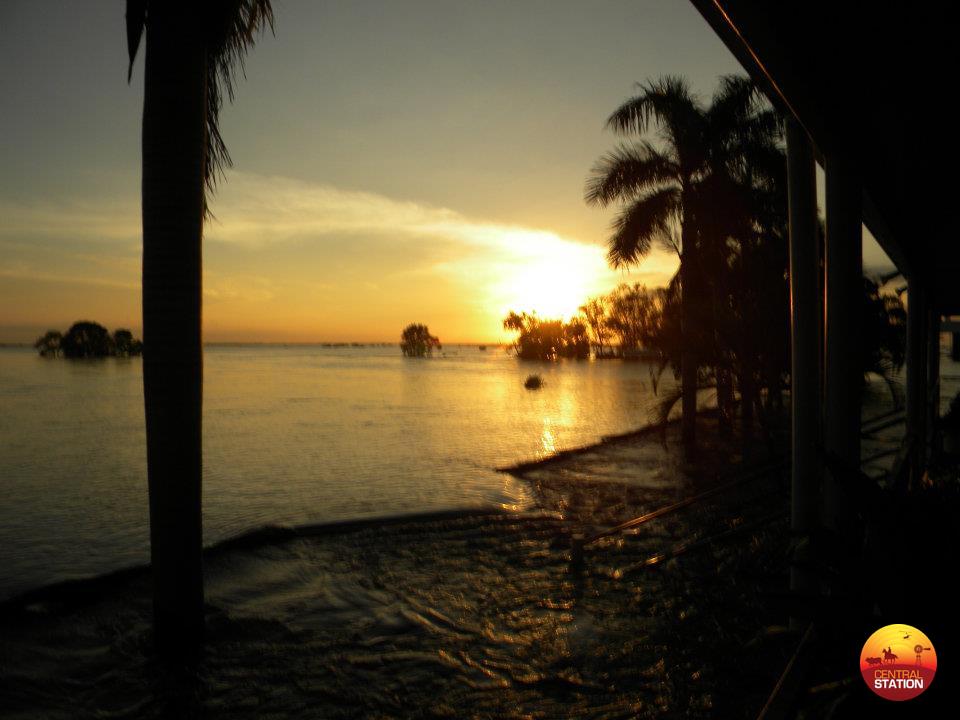 It took about 4 days for the water to drop. This is when we started to pull the debris off the compound fence. Nearly every single pile had 3-4 snakes inside it. I couldn’t believe my eyes as to how many snakes there was. Our clean-up took about a week or so with just the two of us. We were extremely fortunate that we didn’t lose much. The cattle were able to get the sand ridges and our losses were minimal. One of our lovely mares unfortuntely foaled in the floods though; Ken found the foal the next day which was heartbreaking.

Unbeknown to us ,this flood like nobody had ever seen, would repeat on us just 2 years later. This time around we had a helicopter and were familiar with the property, so we started moving cattle early on. We knew what we needed to do. We had also built stands for our generators.

By night 3 we knew what was happening. Except there was an unexpected twist in the plot. At about 5:30pm the airstrip was just going under. We had the chopper on the back of a truck inside the shed. Then the generator stopped. Walking downstairs to get my rain coat off the line, the water was just lapping at the cement of the house. I felt this excruciating pain engulf my foot. I quickly looked down and seen a spider floating away. “SHIT!” I thought. “What now?” The phones were out, the airstrip was covered in water and it was just about dark so we couldn’t use the chopper. Ken told me to go upstairs and wrap my foot while he tried to get the generator started. I remember thinking to myself “Well if this is it, there isn’t much I can do”. Ken returned home from the generator shed about 20 minutes later after he had got everything back online except our phones. By this stage the Telstra box was in the water and the lines had cut out. Ken asked me how I was going, at that stage it was still just a sore foot, he turned and said “Well if you’re not dead in the morning you’ll be good to go” in true Ken humour. Thankfully that was the worst of it. 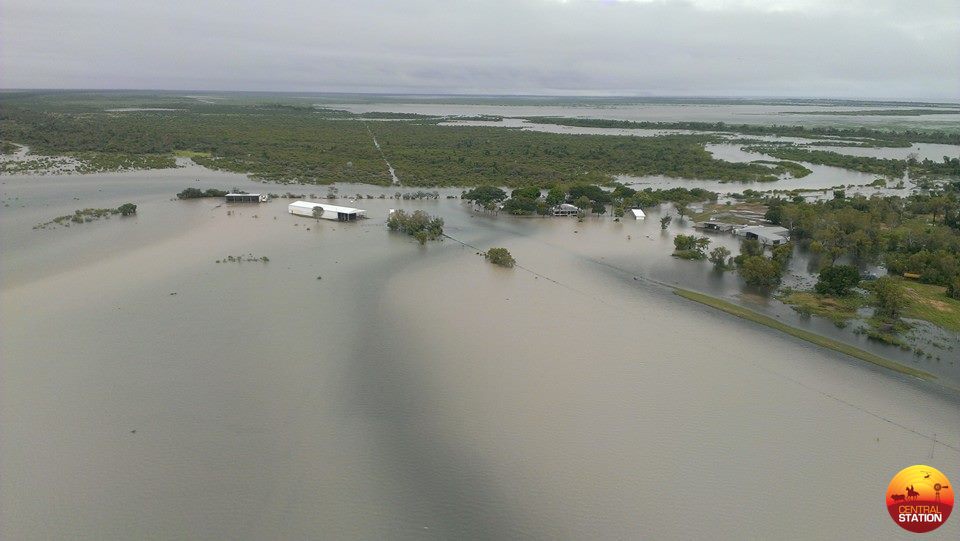 Flood number 2. This time we were better prepared with the chopper.

Inkerman definitely handed out some real character building moments, but this place will always hold a special place in my heart.

< Retail to ringer > Infertility and loss