As you saw in our last story, 2017 had been a year of firsts for us. Cyclone season has been added to that list.

Mandora is situated in what is locally known as ‘Cyclone Alley’. We are smack bang in the middle of Port Hedland and Broome. Mandora has had its fair share of hits over the years, some severe, some not so severe. The most memorable in my time would be severe tropical Cyclone Laurence. It crossed the coast in December 2009 as a category 5 system, bringing wind gusts of up to 285km/hour!! This storm destroyed the 80 Mile Beach Caravan Park and severely damaged buildings at Wallal and Mandora. Pump and Pol (owners at the time) received a call saying Laurence had intensified and would cross the coast as a CAT 5 and they had to take shelter immediately. They had to race down to the shed with their two kids and shelter in the truck as the cyclone passed right overhead. It destroyed the homestead here and made an absolute mess of the place. So far we haven’t (and hopefully never will) encounter anything of that severity. Touch wood. 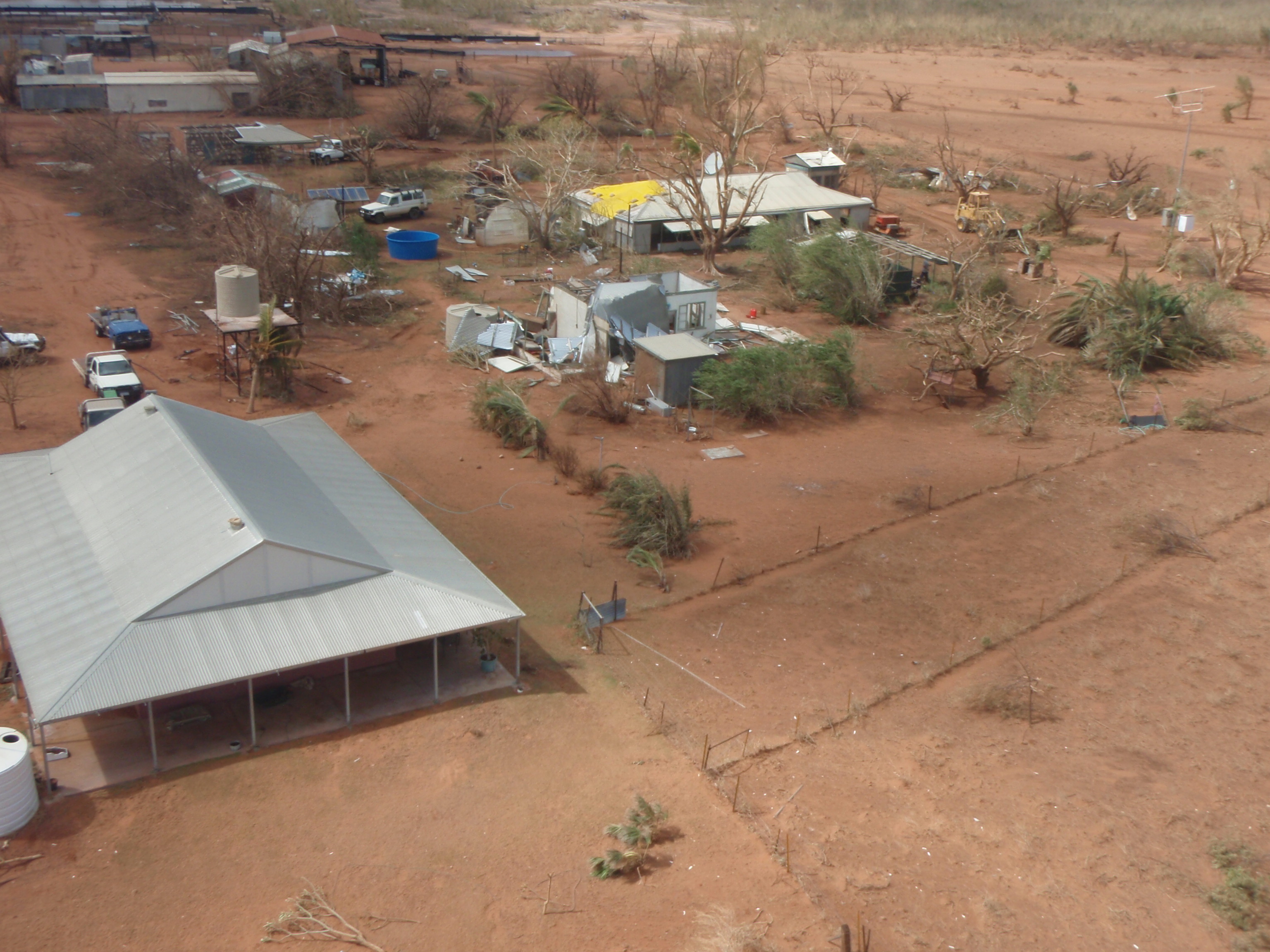 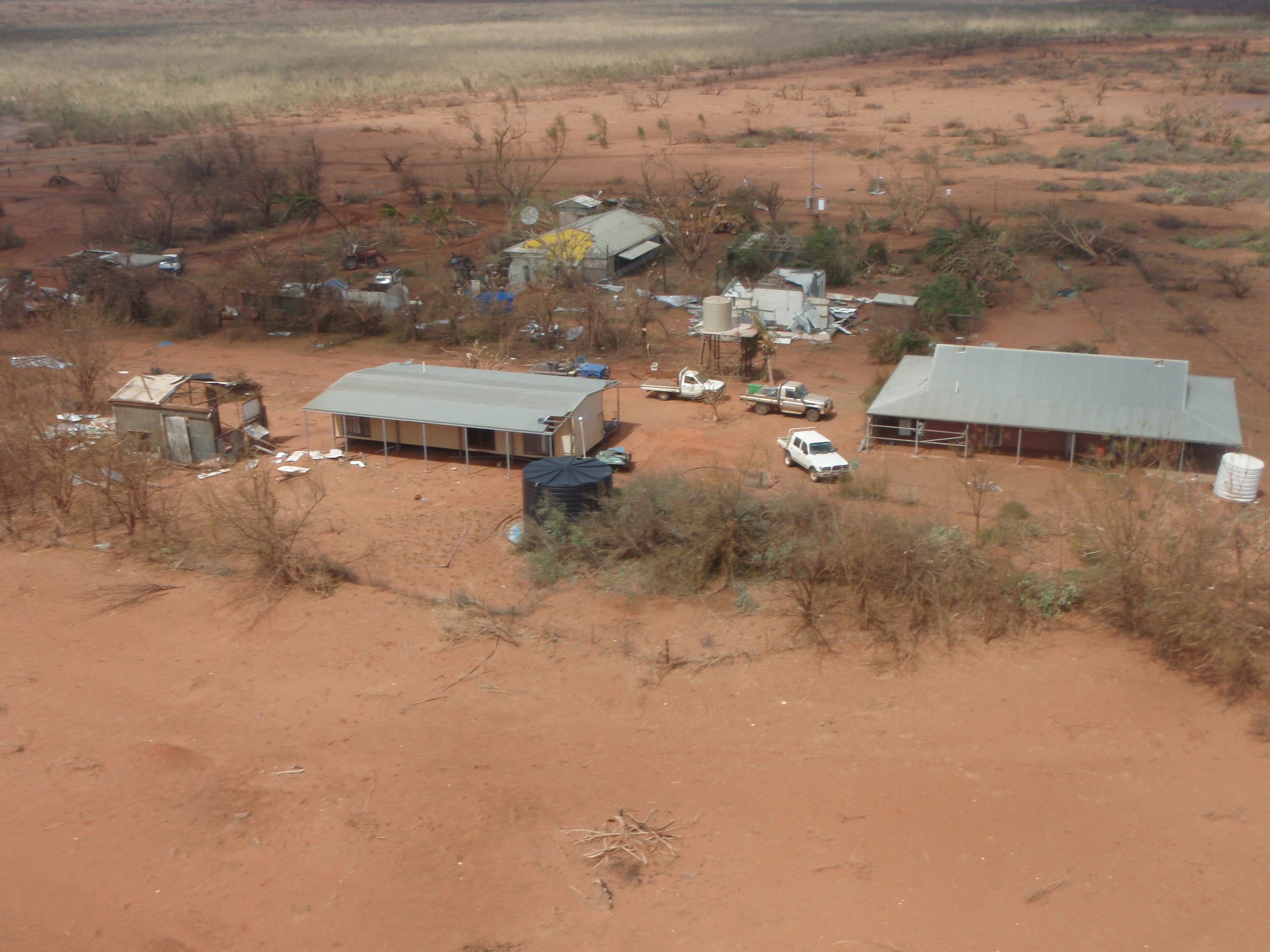 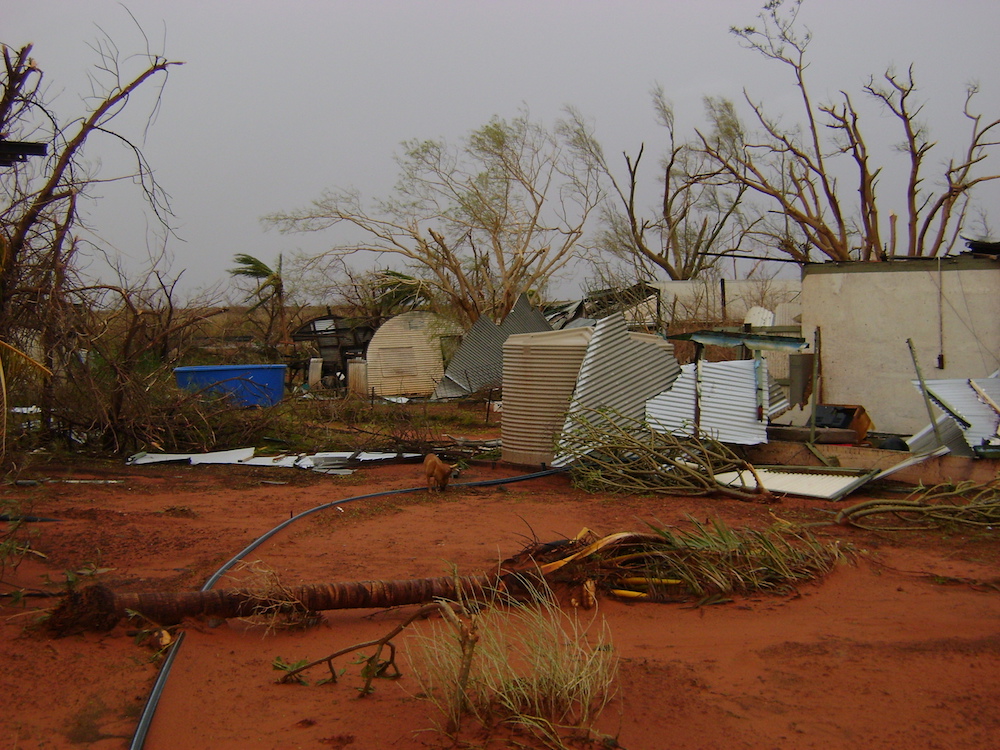 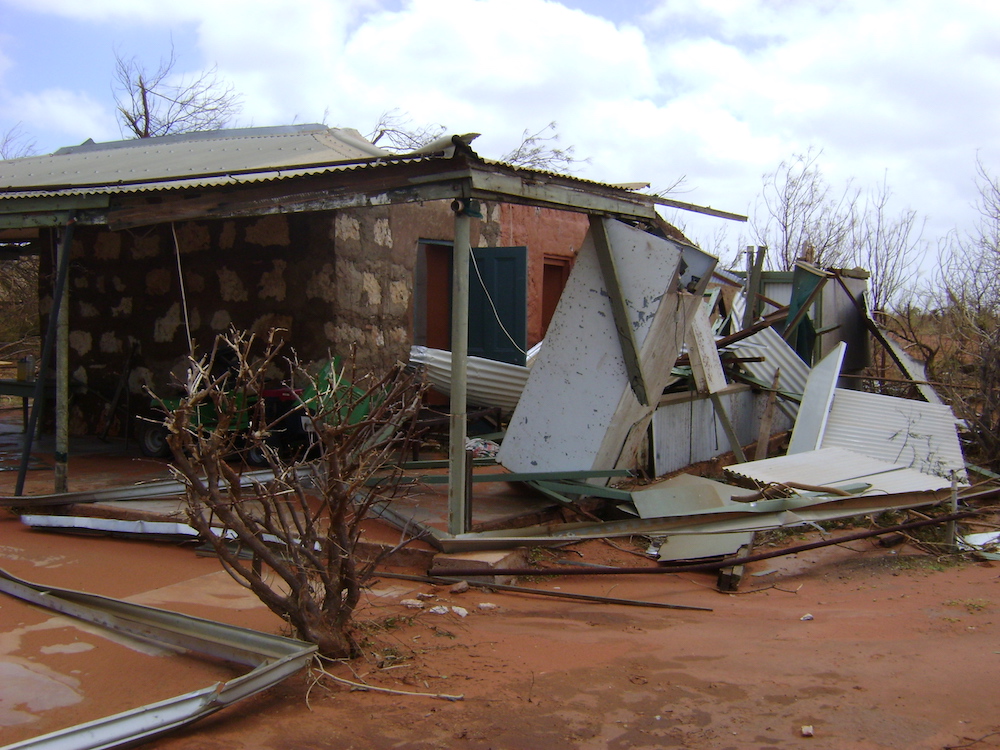 The 2017-2018 season saw three systems make their way down the Kimberley coast. Luckily none of them were to out of control (well for us anyway). The end of December ’17 saw Cyclone Hilda cruise on down the coast and she crossed as a CAT 1 near Bidyadanga. Cyclone Joyce headed our way in early January and crossed over us as a CAT 1 with winds up to 95km/h; she also brought 220mm of rain. Cyclone Kalvin hit Anna Plains right on the head as a CAT 2 causing some pretty bad damage, and he brought 285mm here.

So, what does one do to prepared for a cyclone?

Well, a mass tidy us is always a good start. You should put anything that could turn into a missile away or tie it down. Prune any trees that may cause damage to any buildings. Make sure the generator is fuelled up, because there would be nothing worse than having to race across the flat to top her up when its blowing 100+km/h. Make sure you have somewhere safe for all the pets to shelter, this includes poddy calves and chickens! Ours shared the old stone room, they weren’t overly chuffed about being stuck in a room together, I guess they didn’t really know what was going on outside. 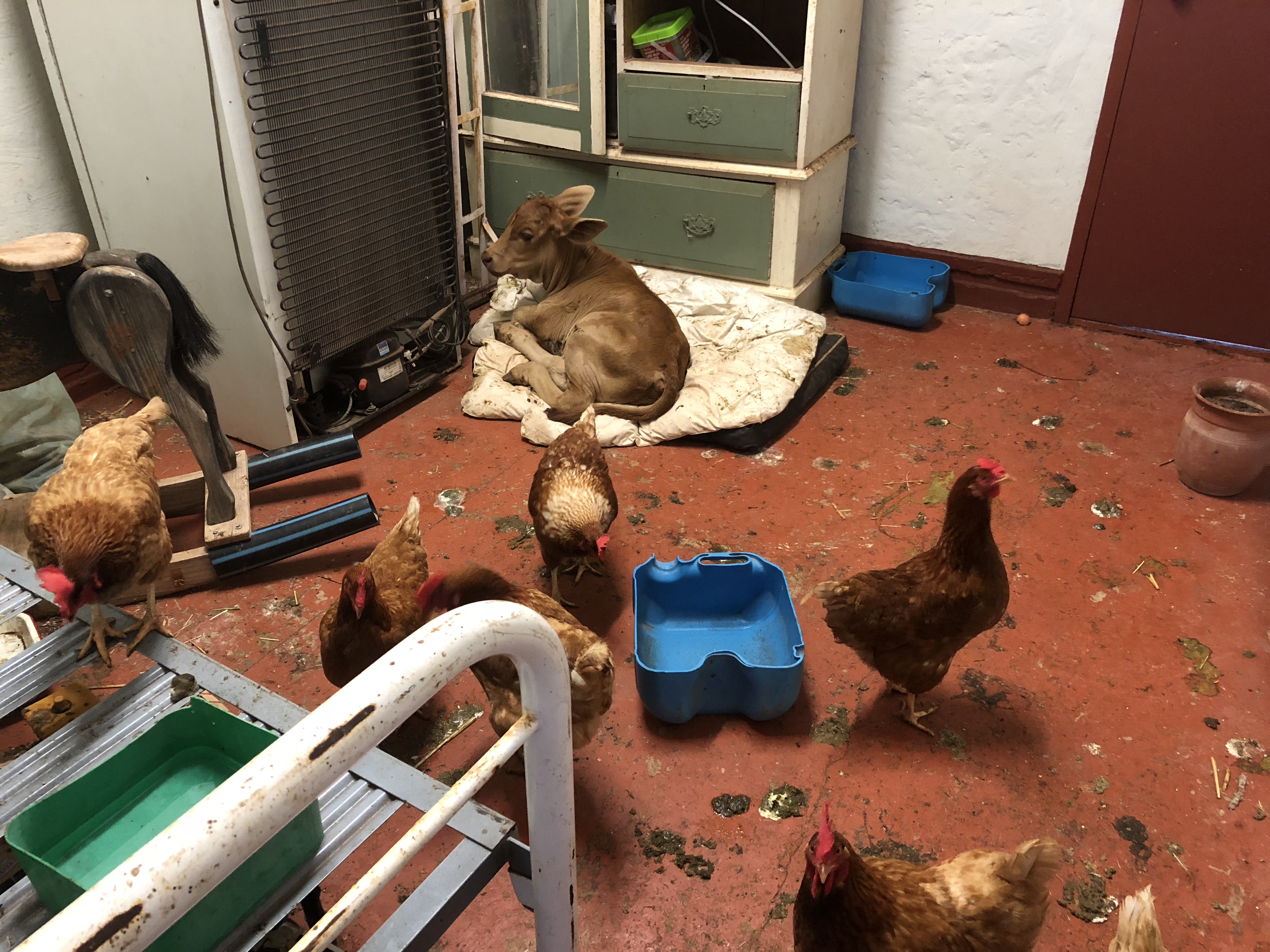 Plugga and Chickens bunking down together.

I made sure we had a bug-out room prepared just in case shit got real. Pol assured me the homestead is definitely the safest place to be and Ben reckons I was overreacting a little, but hey, better to be safe than sorry. The horses were all brought into the cattle yards, we brought them in the night before and put them on hay, they where pretty chuffed about that! The yards are the safest place for them as they can back up and shelter in the conveyer yard ( a yard with conveyer belt around the perimeter), and it also stops them from running around and injuring themselves. They pretty well back themselves into the corner and sulk the whole time. We also go out and move the young cattle off the coastal flats back in to the teatree. When its windy, cattle walk into the wind chasing the rain and they just keep on walking. People have lost cattle out to sea in the past before there was good fencing along the coast. The older cattle still do it but they have a healthy respect for fences, nine times out of ten they will pull up at the fence and just sit there, we go out after an event like this and make sure no one is sitting on the fence lines. 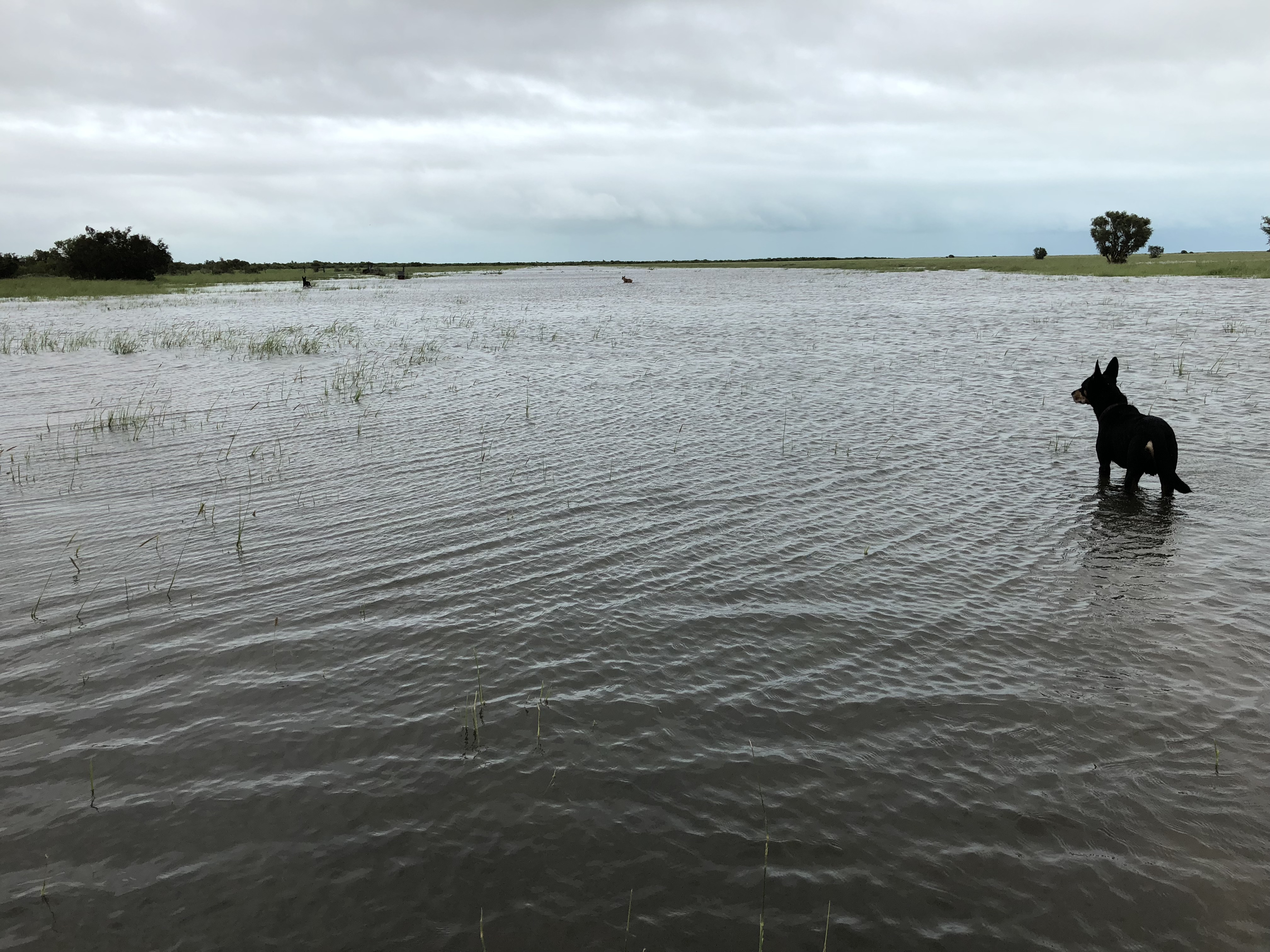 Cyclone Joyce was our first big rain event, she also snuck up on us and arrived 12 hours earlier. We had been out and moved the young cattle into the safety of the teatree, brought the horses into the yards and done a mass tidy up. There were two jobs left to do first thing in the morning – go out open the gate for the cell cows so they had access to a sheltered paddock and bring the poddy calf and the chooks into the stone room. 5am rocked around and it started hosing down, so Ben and Davo jumped in a ute and raced out to open the gates for the cows, while they were out Katie and I gathered up the chooks (which was more comical than you would think) and led the poddy into shelter. By now we had lost all phone reception and Katie and I were getting a little worried where the boys were. After half an hour passed, we made a plan. I was going to head out on a quad bike with a two way to see if I could find them. As I was getting ready to head out we looked out the back door and saw the boys walking back in the front gate – they were absolutely soaked! They had got so close to the gate, and had driven through knee deep water the whole way out there only to get bogged 300m from the gate they needed to open, so they walked on over and opened the gate up for the cows, all in torrential rain and blowing 70km/h, they then walked 3.5km home. Surprisingly they were in pretty good spirits. Davo thought it was hilarious that he could swim down the driveway. With the reception down, we contacted Ben’s parents nearly every hour to check on the track map to keep up with what the cyclone was doing. 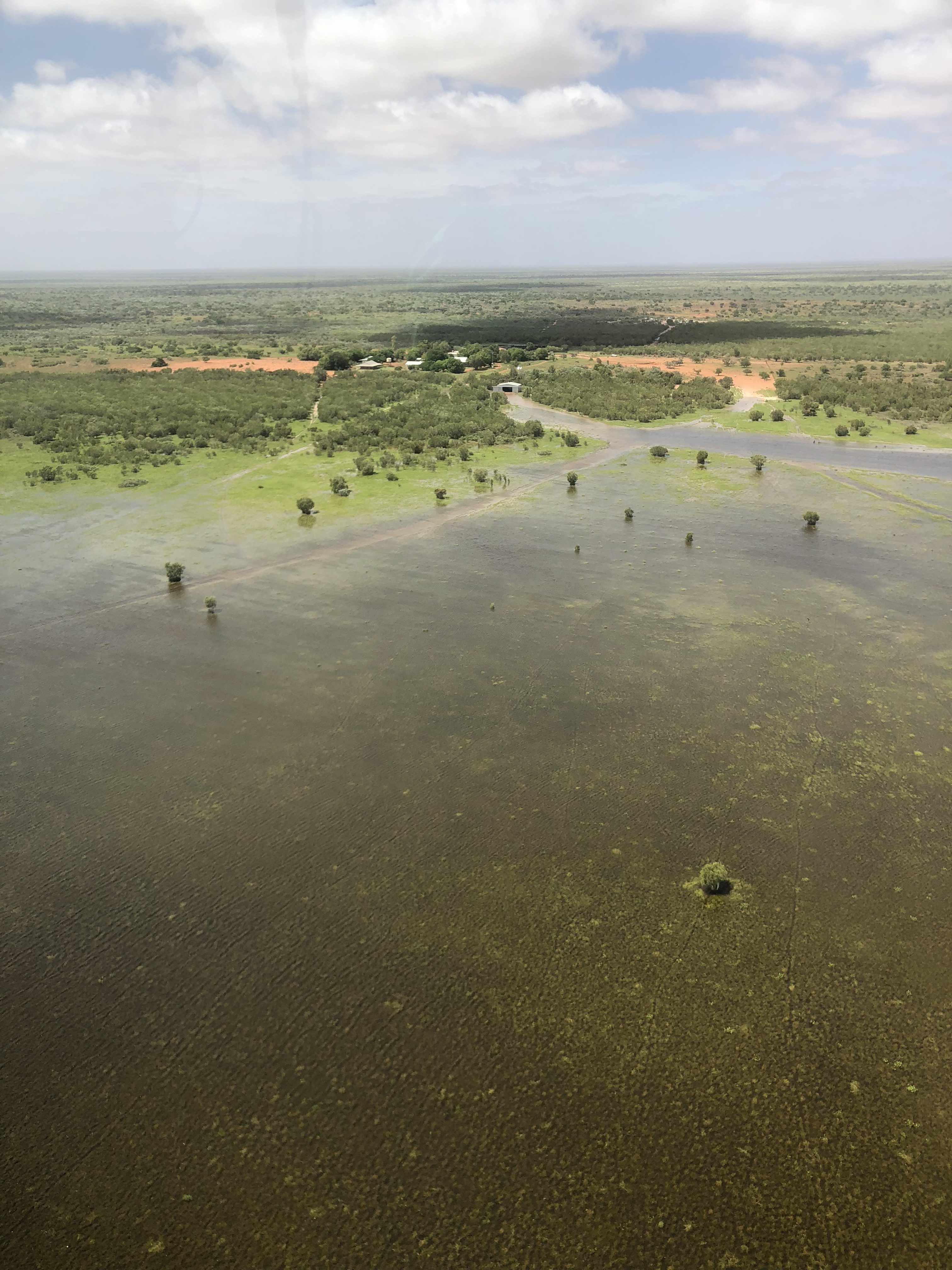 Cyclone Kalvin was our second big rain fall event. Our centennial average here is about 350mm a year, by the time Kalvin had passed we were up to 729mm. This was rather worrying. Our neighbour had got a chopper down to go check on their cattle, they let us share the hire costs and we went up the next morning nearly the whole coastal flats were under water. There were cattle trapped on islands and some fences fully submerged. We made the decision to hire a chopper for a few weeks and Ben flew it everyday for two weeks checking up on cattle, cutting fences and moving cattle to higher ground and making sure the ones stuck on the islands weren’t running out of feed (they certainly weren’t running out of water). As the water started to dry up we really started to see the damage it had caused, we made the call to Pump to pick his brain as they had gone through a similar scenario in the early 2000’s when they had 1033ml for the year. Check out my next blog to see what we had to do next. 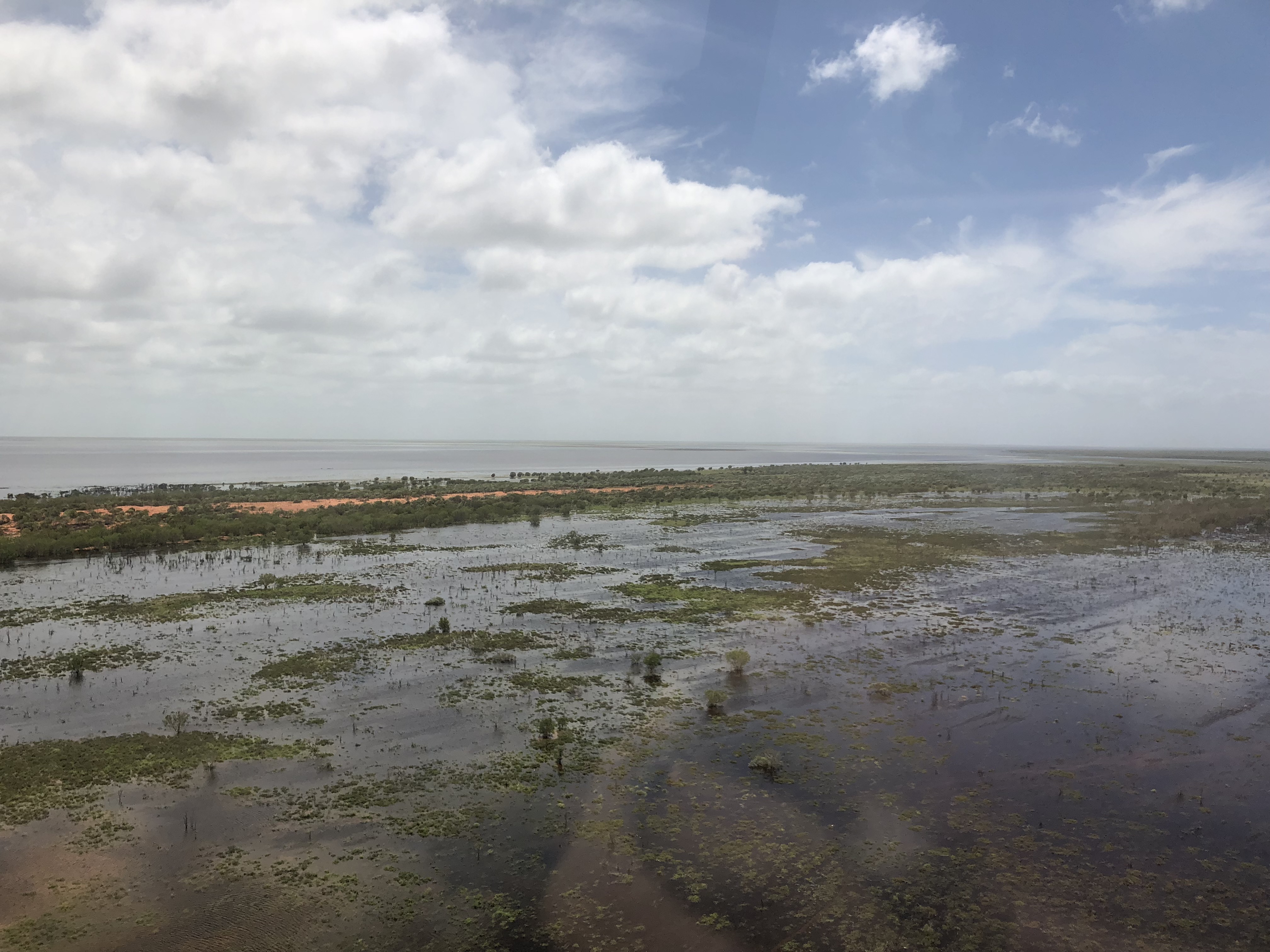 The coastal plains after the rain. 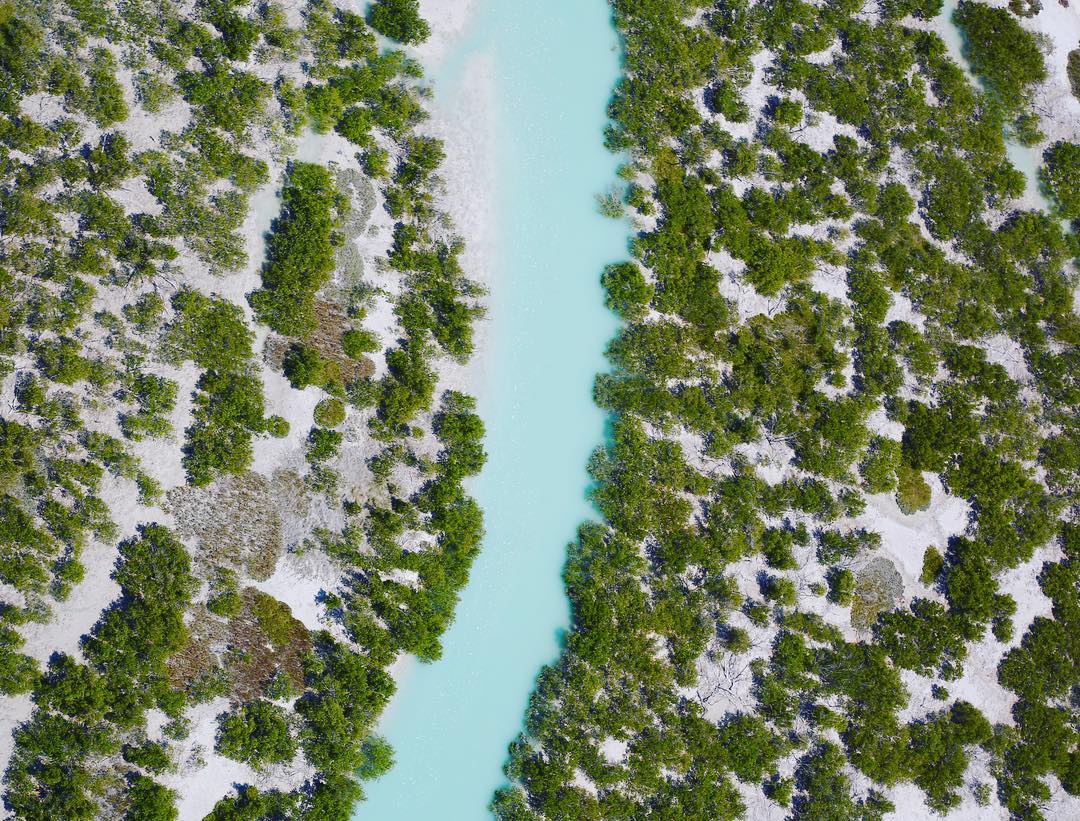 When the water is where it should be. Photo by Whirlybird Photography.