We don’t kill dingos on Wooleen. It’s not a popular management strategy amongst an almost entirely pastoral community, many of whom have only recently (in the last 20 years) changed from sheep to cattle. We only made that change in 2006. Some in the south of the district still have sheep. I have been asked, do I not feel a moral responsibility towards the sheep producers? I do, but I feel a much greater responsibility for trying to halt the declining productivity of the pastoral resource that I manage on behalf of the Australian people.

But we did what we could. We always had a full-time kangaroo shooter. We collected 2000 goats every year, and in many years, we made a handsome profit on them. But it was a false economy. It was not management, it was only harvest. We had no means by which to limit the grazing area of these animals, and they went wherever they pleased. Even after the most rigorous goat trapping (catching goats in summer on the waters) and mustering regime we always knew that we only caught at most two thirds of them, leaving roughly 1000 behind. That 1000 often frequented the sweeter feed in the rivers systems, historically degraded areas that needed rest the most. This meant that it was practically impossible to rest that land, because even if you moved the sheep out, 61% of the grazing pressure remained, and the landscape could never recover. Pastoralists in the area told me that destocking would be a waste of time, because the goats and kangaroos would just eat it all.

In order to mitigate this problem we turned off all of the manmade watering points when we destocked, so at least in summer there would be no water, and therefore no goats and kangaroos. But there were often natural waters about, especially after a thunderstorm moved through. After one such thunderstorm I shot 3340 kangaroos in one month on the dry Wooleen lakebed, an area of only 5000ha. The kangaroos had encamped there to eat all the grass that the destocking had allowed to recover over three years. We also had a kangaroo shooter who shot 1500 in that same month.

But since the dingoes returned roughly 9 years ago, things have changed. The kangaroo shooter still has a camp on Wooleen, but in the past five years he has only been here twice. The last time he came, he drove over 400kms, throughout the district, and only shot 11 kangaroos. Such has been the efficacy of the dingoes in removing the kangaroo population. I estimate that the grazing pressure of the kangaroos on Wooleen has been reduced by 90%. The reduction in goat numbers of has been even greater, to the point where I would be surprised if there was a single goat left on Wooleen. We have removed 90% of the unmanaged grazing pressure on Wooleen, simply by not taking the time and effort to kill the dingoes.

We now have new generations of important riparian trees, such as Sheoak, Red river Gum, Coolabah and Bottlebrush. Our river channels still have many of these trees (with the exception of the bottlebrushes), but they are all trees that are hundreds of years old, and they were out of reach of introduced grazing animals when they arrived in the 1880’s. Since they are very slow growing, few have managed to get past the increasingly hungry mouths since then. This left us with an expanding generational gap, which is a very dangerous position for the riversystem to be in. Because without these trees there is little to slow the floodwaters when they rush through 5 metres deep. This increases the chance for large scale erosion, and drains water away from the surrounding floodplains where it could have been very productive.

In the last 40 years goats have been the major grazers of these riparian species, as sheep and cattle don’t particularly like eating gumtrees (though they don’t mind the sheoaks). Since the dingoes have removed the goats, not just on Wooleen but throughout most of the district, a new legion of these essential trees are once more lining the banks of the Murchison river. This effect has a direct link to beef production. As water is slowed in the channels by these trees, it is forced back out onto the broad flat floodplains where it should be, to enliven the best pasture.

Lots of people ask what are we going to do when the dingoes run out of kangaroos to eat. I would say that we reached that equilibrium a few years ago, after the numbers of kangaroos appeared to stabilise, the number of dingos also appeared to drop. But in order to find out that the long-term consequences of not controlling dingoes was, we visited a station in the Wiluna district who ceased killing dingoes 27 years ago to find out. When we visited that property was very dry but the landscape was still looking good, palatable perennial grasses were still available. The first windmill we visited had a yard around it, and inside that yards was a calf that had recently been killed by a dingo. I asked the pastoralist if he was worried about it. He said he wasn’t, that he factored in up to 7% calf losses to dingoes in poor seasons like the one he was currently in. We saw no Dingoes while we were there, nor did we see any more dead calves. That calf was unlucky, the yard separated him from his mother and it had cost him his life.

But some cattlemen are not so forgiving, its difficult to watch the animals that you are responsible for get eaten by something else and not do anything about it. But the bigger picture, at least in the case of Wooleen, is that we have a choice between 61% unmanaged grazing pressure, or we accept a 7% loss in our calves during poor seasons. The choice is clear to me. Its important to note that we do periodically trade cattle, and have had cattle for over half of the time since 2011. While we don’t have big numbers, the cattle we do buy are all drought affected and in very poor condition when they arrive. For two of the years we have had cattle, we have been in a declared drought area. So we have had very poor condition cattle in a very poor season, and yet to date we have not had any evidence of dingo attacks.

We put this down to the distance that our cattle now have to walk to water. Our cattle do not need to move more than 3km from the water in order to get a feed of their favourite fodder, even in a drought. Because they are only a short distance from water, small calves can travel with their mothers to the water each day, and the cows can protect them from dingoes. In a situation where the cattle need to walk larger distances to get to water, which they would have done had we not concentrated on repairing the landscape, the calves would not have had the strength to accompany their mothers on such large journeys each day. So the cows would have no choice but to leave their calves for hours each day while they walk to the water. And that’s when their calves get attacked. This is especially true during poorer seasons, as the cows walk further out in search of food.

Since we stopped killing the dingoes we have also seen the complete disappearance of the Fox. Foxes used to be very common, and they certainly had a large impact on things like native marsupials and ground nesting birds. Dingoes also eat small native marsupials, but not very many, they are more interested in the large marsupials, like the kangaroo. Dingoes also hunt over a much larger area than foxes, which increases the chance for small animals to hide. For example, the Wooleen lake area used to be home to at least twenty foxes, whereas now only two dingoes frequent the area, and it is only part of their range. If you are a ground nesting bird you would prefer two part time dingoes to twenty full time foxes. Perhaps the best evidence of this transformation was discovered by Birdlife Western Australia when they found two adult Painted Snipe and four large chicks at the edge of the Wooleen Lake. It was the seconded confirmed breeding of these birds in Western Australia for the previous 15 years.

Feral cats are also affected by the dingoes resurgence. While dingoes cant kill all of the cats (or perhaps even very many of them) because cats can climb trees, they do change their behaviour. Cats no longer frequent open treeless areas, and they no longer hide under troughs waiting for birds to drink above. Dingoes drink at troughs too. 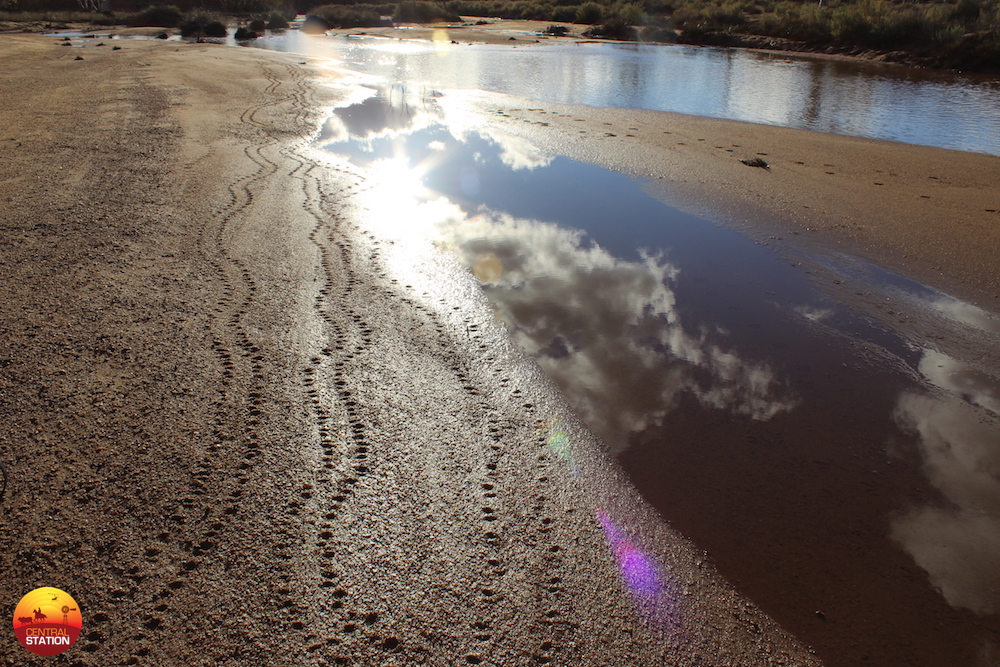 Turtle tracks have become much more common since the dingoes removed foxes from our area. 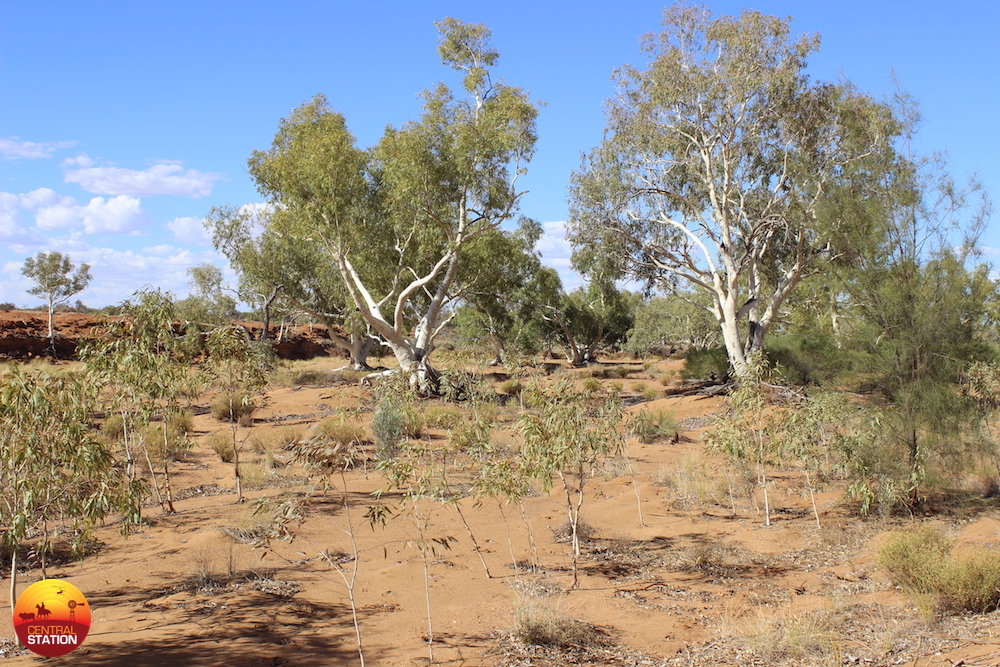 Since Dingoes removed the goats, Sheoak, Bottlebrush and Red River Gums have enjoyed the first mass recruitment for over 80 years. 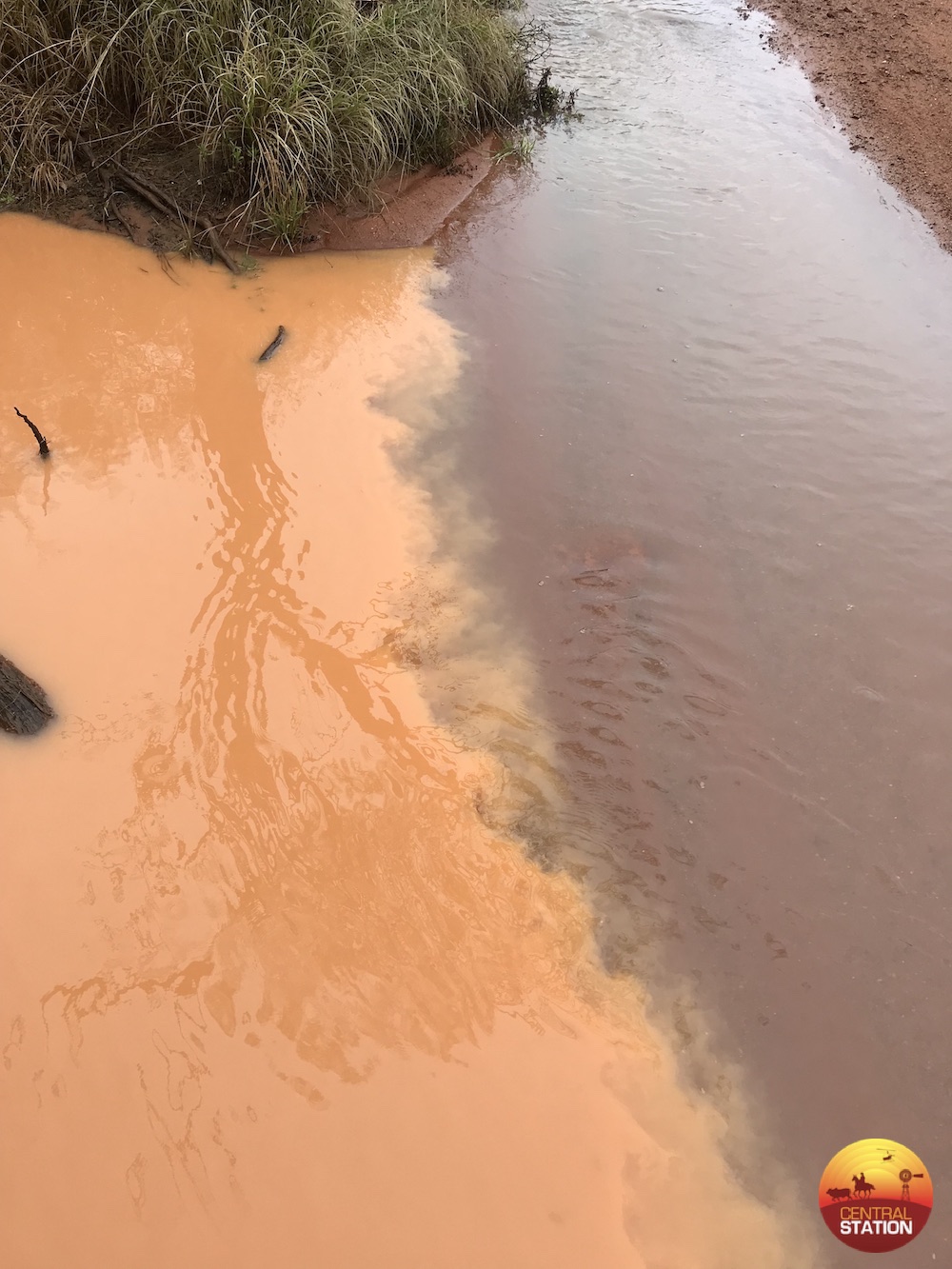 I believe the effects of the dingoes reducing the grazing pressure has been a major factor allowing many creeks to flow clear for the first time in living memory. The contrast is so stark here because the murky water is flowing off the workshop yard, whereas the clear water is flowing off a stable (recovering) landscape. 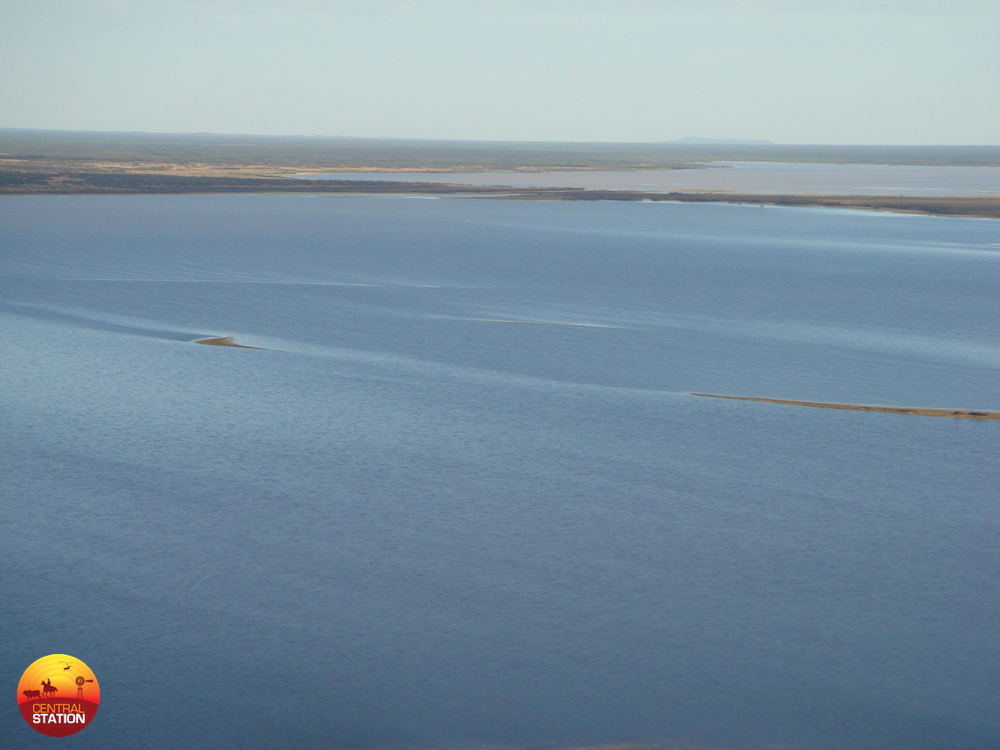 Even the Roderick river now flows clear into the Wooleen lake in anything other than a large flood. The lake in the background filled from the Murchison River which contains much eroded sediment and consequently is a dull brown colour. The lake in the foreground filled from the Roderick River and the sediment has been filtered out by 14kms of destocked country, and consequently the water is clear. This effect can be seen from satellite images.