When we moved to Kachana Station to set up our home in 1991, there was hardly any vegetation and we saw native animals on rare occasions only. Once we had established some vegetation and electric light, we attracted insects, especially during the wet. This brought along other animals like frogs, lizards and geckos. When we added chooks to our menagerie, snakes would regularly visit us at night for “fast-food chicken’.

Rather than fighting nature, we decided on an environment where pythons feel safe as they are non-venomous and harmless to humans. They keep the native mouse population in check and prevent brown snakes from settling in. This of course meant keeping our chickens safe at night as pythons are generally nocturnal predators. We built little snake proof cages and hung them inside the chicken run. It did not take long to train the chickens to roost in those cages and for us to remember to secure the lid on dusk.

Over the last twenty odd years we have had several large Olive Pythons that have become part of the family. We recognize each snake, as they all have special traits, and they have all been named. ‘Katharina’ only had one eye, ‘Maria’ was the biggest until the day she died, ‘Sylvia’ (or ‘Miss Agro’ as the children call her) was about 1.5 m when she first visited our chickens some years ago, and then we have ‘Scar Tail’, who joined us more recently. 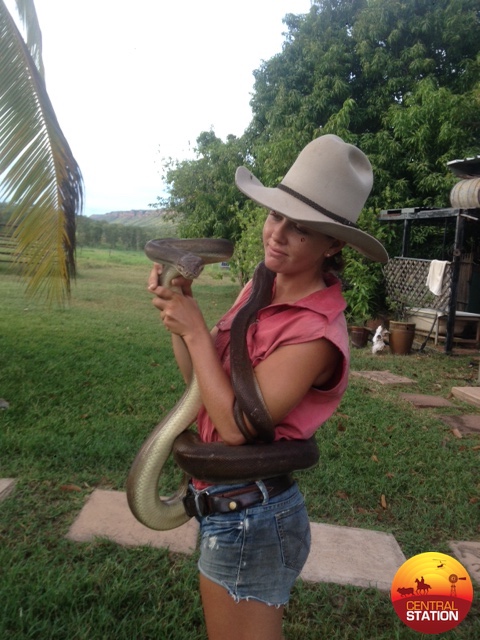 This is Kristina with long-time friend Maria.

These snakes which were little when we first noticed them, have of course grown to some good sizes in the meantime. As the chickens are safe in their cages at night, and the adults familiar with them, this was never an issue until we became grandparents to a beautiful little baby girl.

We live in a open-plan house without doors or windows and wanted to ensure our little grandchild’s safety at all times but especially at night when snakes may be roaming.

We remembered a beautiful little cot Chris had acquired at an auction some 30 odd years ago. It was the perfect little wooden bed with mesh all around it. I believe it is the kind of cot people on farms or in the outback used to keep their babies safe from mosquitoes and flies. I remember how much I liked this little cot and I used it while we were based in Kununurra and my first-born Rebecca was an infant. 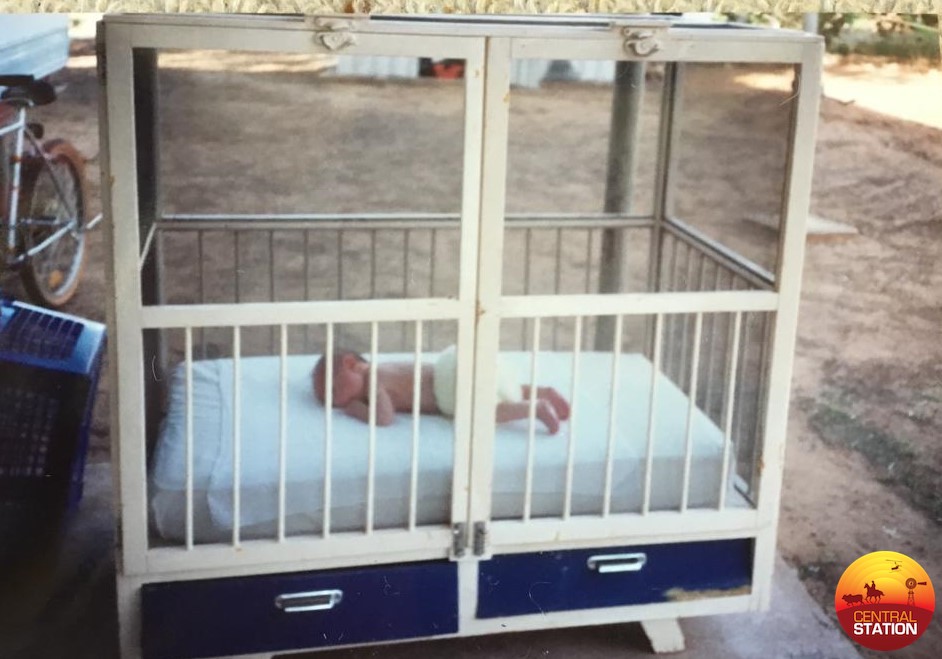 Rebecca used the cot that we acquired at an auction for little day naps. 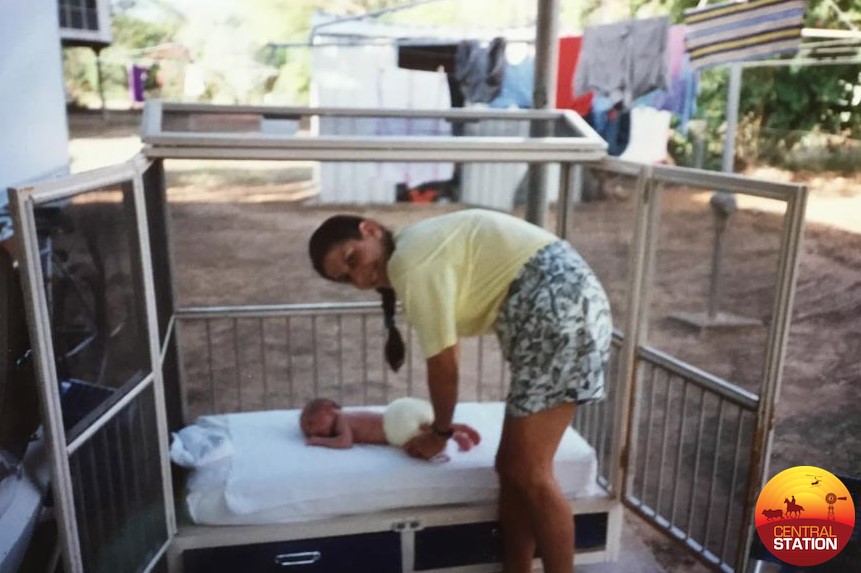 The cot had two doors which were easy to open and gave easy access to the baby.

Once the little cot was no longer used, we dismantled it and kept parts of the wooden frame in the shed for future use. However, having experienced the strength of a large snake and witnessed how easily a hungry and determined snake pushes into a cage made of normal chick-mesh we felt this cot would not do. In addition, it would only be a matter of time before the wood was eaten by white ants. We decided on a stronger version of this model to ensure safety at all times. A cot was to be constructed using steel and snake-mesh.

Chris sketched the dimensions, ordered the steel and commenced the work. The first step was to weld all the pieces together. It was then spray-painted pink. 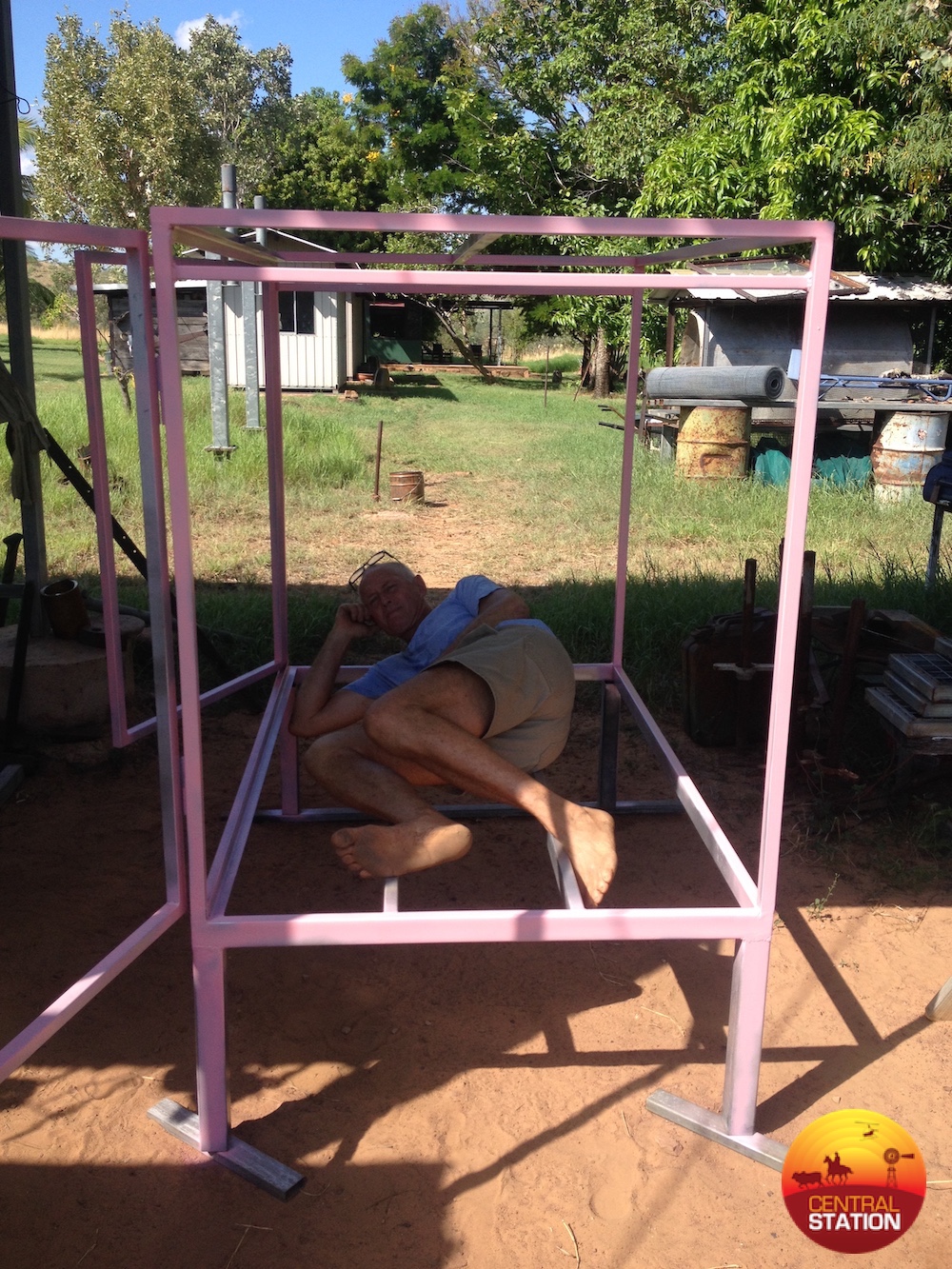 The cot is big enough as it allows Grandpa to have a snuggle. The roll of snake mesh can be seen sitting on a drum in the background. 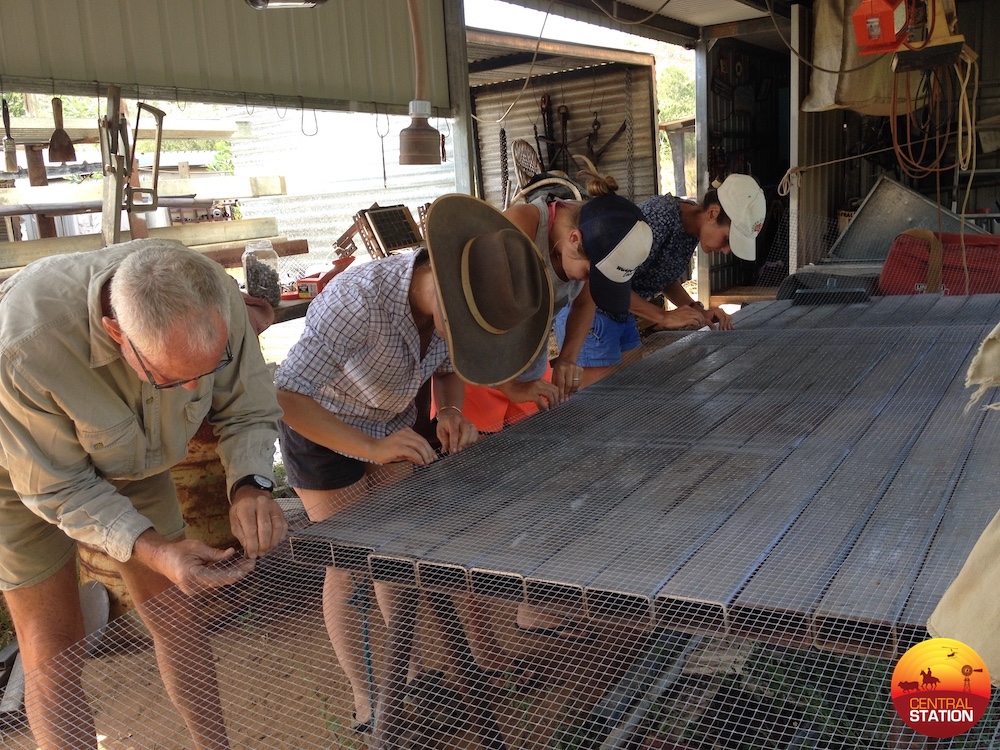 Building the cot was a family affair. The mesh had to be cut and bent. 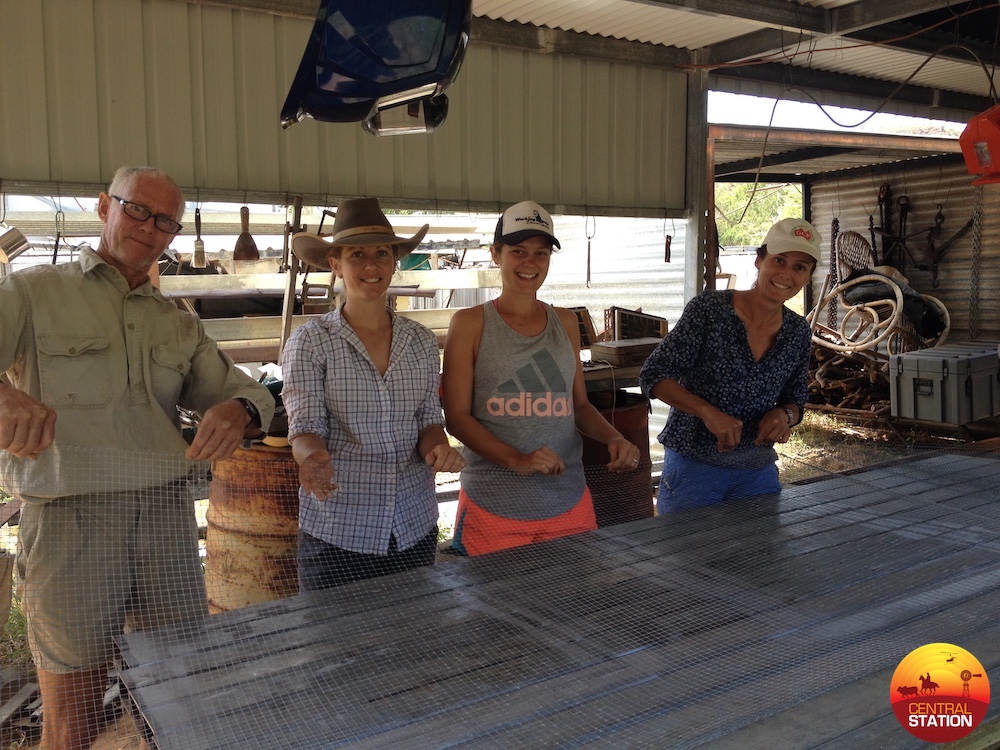 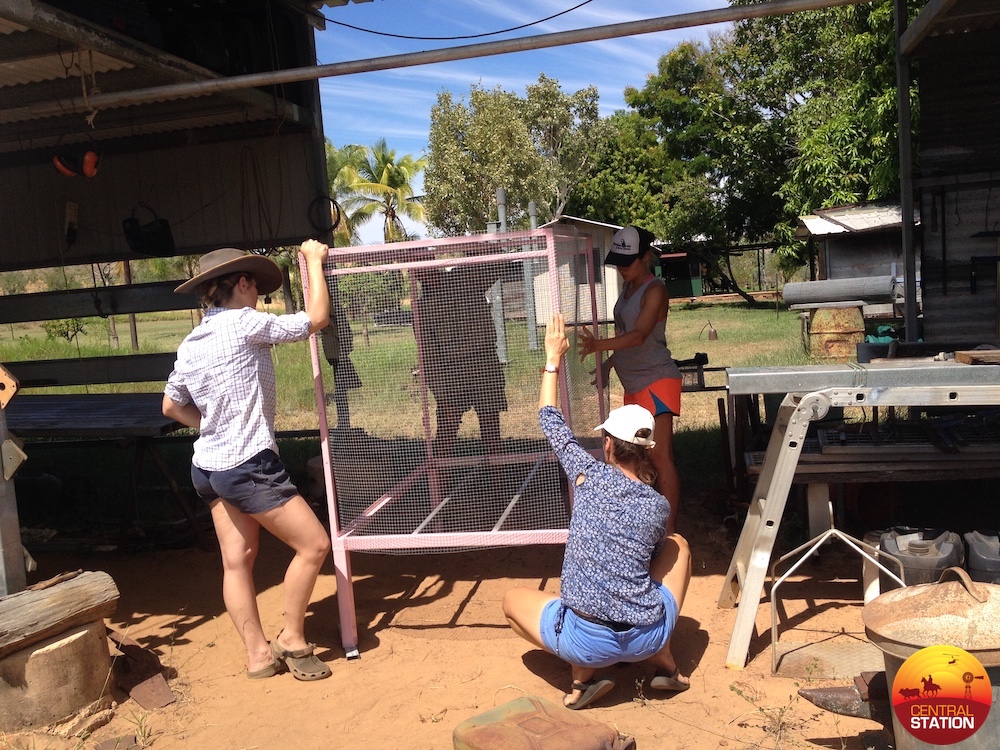 The mesh was secured with tec-screws.

As the snake mesh is a hard material and we did not want the baby to push against it once its movements increased, we decided to have a custom-made tarp created where the cot mattress would fit. This would also prevent the baby from rolling between the mattress and the mesh. 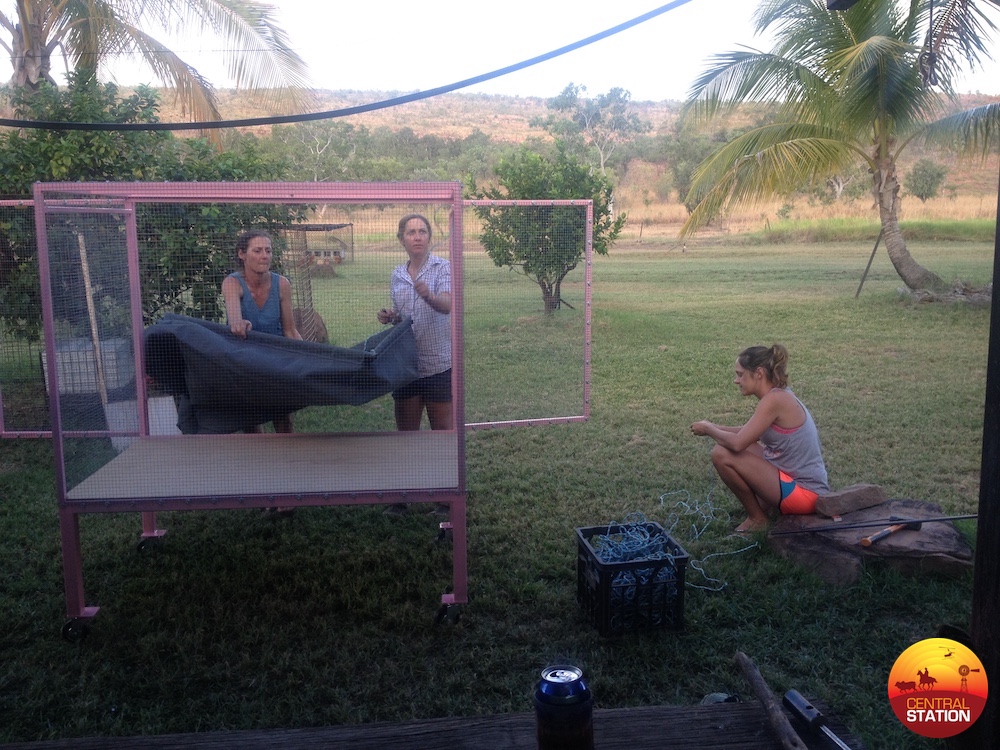 The wooden board, some wheels for easy movement and the tarp are added to the cot (again a family affair).

For me, the ‘interior design’ was the fun bit. After all, the cot was not supposed to look like a chook-cage, but a cot fit for a princess. 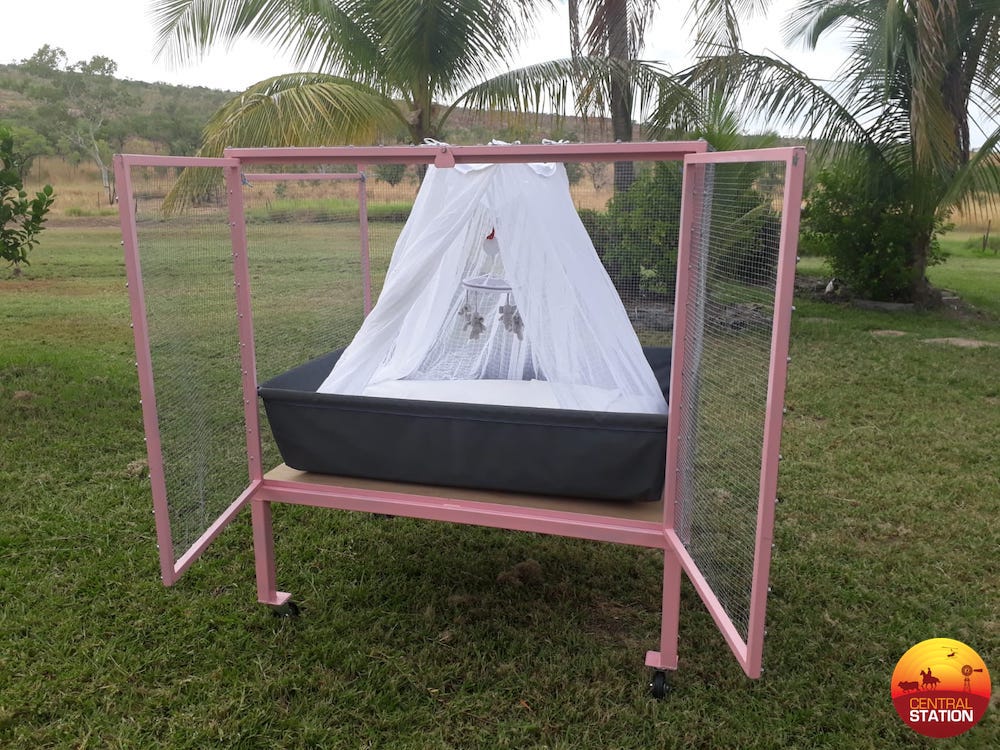 A cot fit for a princess. 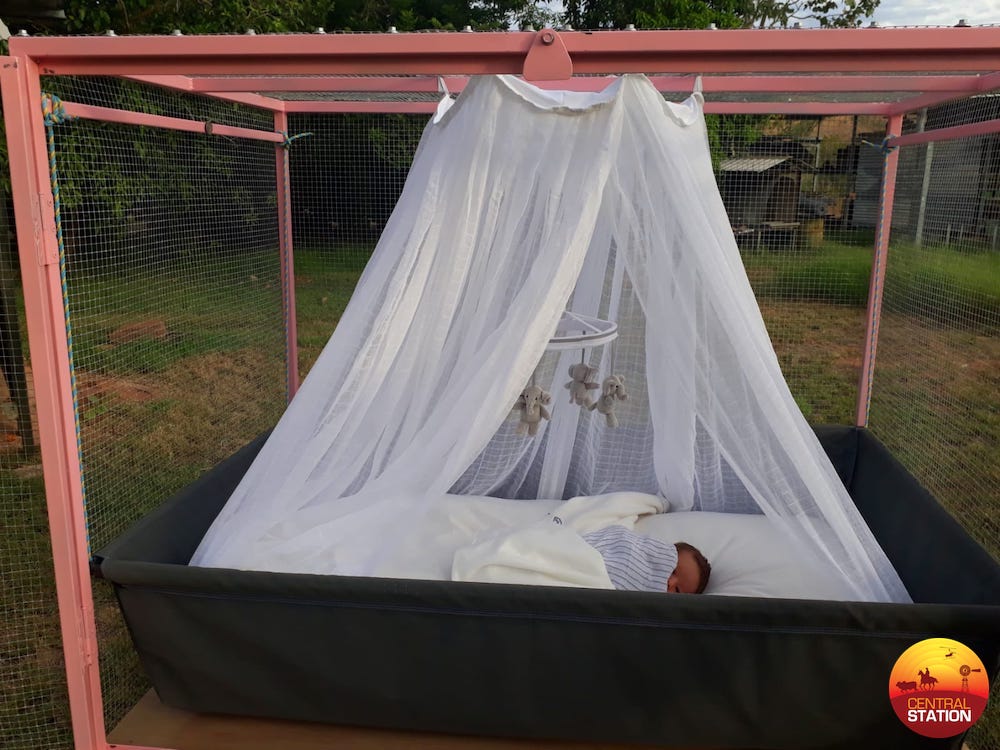 Georgia in her new cot for the first time.

Special O H & S Notice: It is recommended to lay your baby with her feet at the foot of her cot, so she can’t wriggle down under the bedding. (Georgia was only placed in the middle for the photograph😊.)