We were meant to leave from Drysdale Station and head to Kalumburu Catholic Mission, and had expected the council to finally open the final stretch of road only to find that they said it may take up to three weeks. Mmmm, what to do?

After many phone calls from the fridge (the public phone is in the fridge at Drysdale Station) and managing to secure a council road permit in one day instead of three, we decided to leave our caravan behind and set off in the morning, all packed up in the ute for up to three weeks. 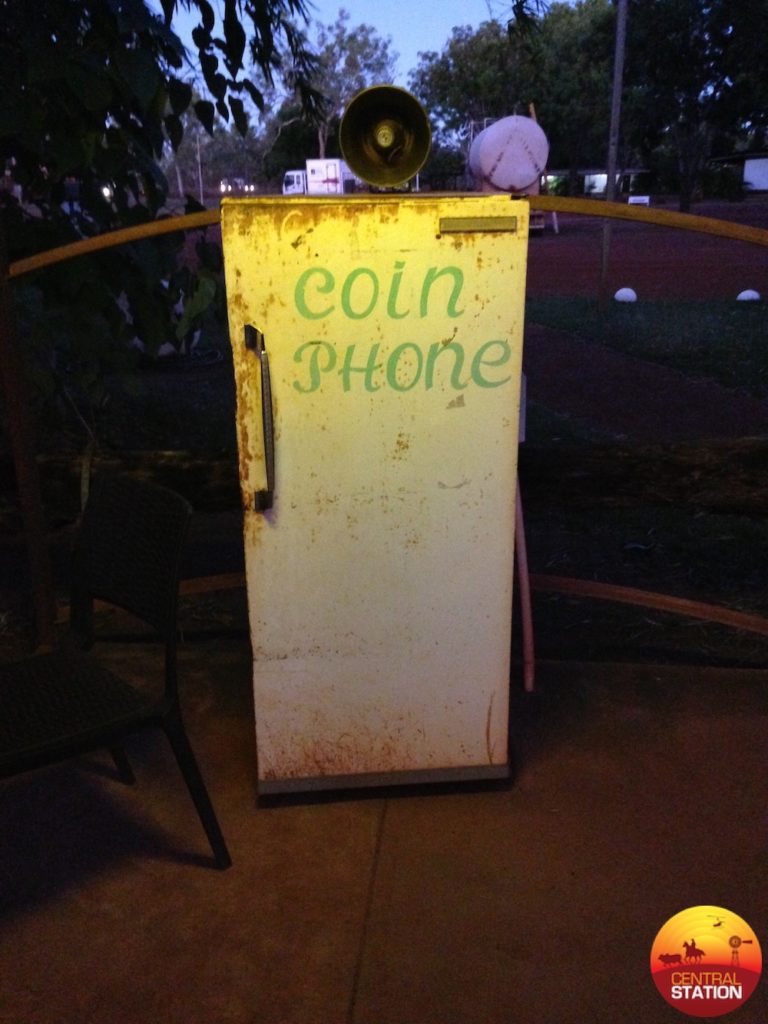 We finished packing just as the camping chairs and beer started to break out at Drysdale’s happy hour in the camp grounds. The sun was about an hour from setting and we were all set to go first thing in the morning when Richard noticed a distinct lean on the back of the ute…

After investigating it was clear that the airbags on the right side of the vehicle had no air in them and at $400 a pop, we had only brought one spare. After littering the glovebox contents through the car, Richard managed to scrounge up a mobile phone number of the mechanic who had done the conversion on our car. Richard headed back to the fridge to make some more public phone calls fervently hoping that with the two-hour time difference Phil might answer his phone after work.

Phil our mechanic and our saviour of the day knew just what the problem was and within half an hour Richard had the ute nice and level and all airbags were in good order.

The road report was different from everyone we spoke to. Apparently after the latest downpour a truck got well and truly stuck and made a mess of the road. The council promptly closed the road to prevent more damage. Tourists were sneaking through though, risking a $1000 a tyre, per vehicle fine, and chewing up the road further, preventing the fully loaded supply trucks from Derby to get supplies through for the year.

So the next morning we set off hoping that we would get through to what would be our home for three months.

Upon arrival I had a lovely morning tea with one of the neighbours and we have were generously offered a place to store our van much closer to our destination. So, off we went back to Drysdale Station to pick up our travelling home!

A mustering contractor and great guy we know pulled out of the bush in front of us in the middle of nowhere in this part of The Kimberley in Western Australia. This keeps happening to us, mind you. The last time we saw him we were at a lookout on the road to Gove in Arnhem Land in the Northern Territory.

We pulled over and had lunch together. Richard raided one of his magic pickle and home-made corned beef sandwiches.

Before heading off we discovered the glass toilet door in the caravan had become a casualty – the pin had sheared off on the corrugations. Luckily the glass was still in one piece but the frame had two big worn gashes from rubbing on the stove. The question was where put a loose glass door now? We had to put it under the mattress and keep checking as we went to see if it vibrated out from underneath.

With only 62kms to go to our destination the road became a track after the Theda Station turnoff. We were hoping that at the speed we were going we would make the river crossing 5kms outside Kalumburu before sundown. We weren’t really keen on backtracking at that stage of the day. Oh, and we had decided to keep going on with the van just in case we could get through.

The track was very slow going with sharp rocks and bog patches to deviate around. The sun was heading for the horizon and we still had at least 10kms to go before the big river crossing 5kms before the Mission. We weren’t sure if we could cross the river yet and there was no way we were going back.

The oven glass door became loose and we could hear it rattling around, but we were hoping that it would make it and Richard could sort it out when and if we get there!

I would have loved coffee right about then! 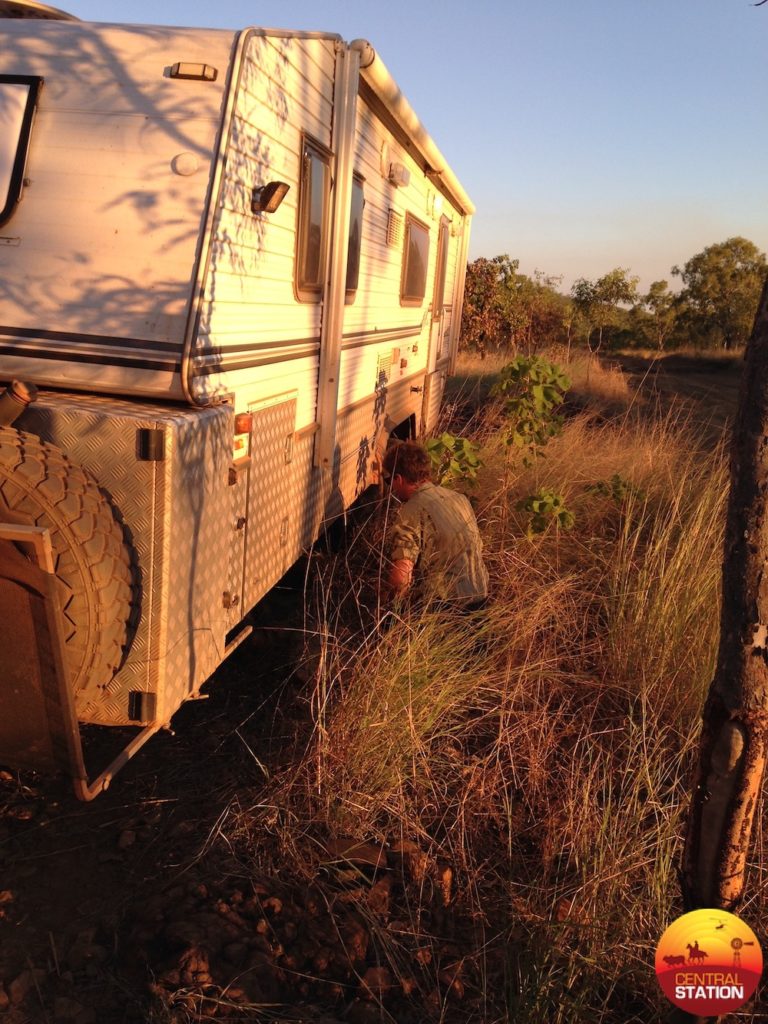 Richard removing boulders under the van.

Richard had to move small boulders from under the van so we could go around a wet patch of road. As the sun started to set we realised we weren’t going to make the river crossing by sundown. 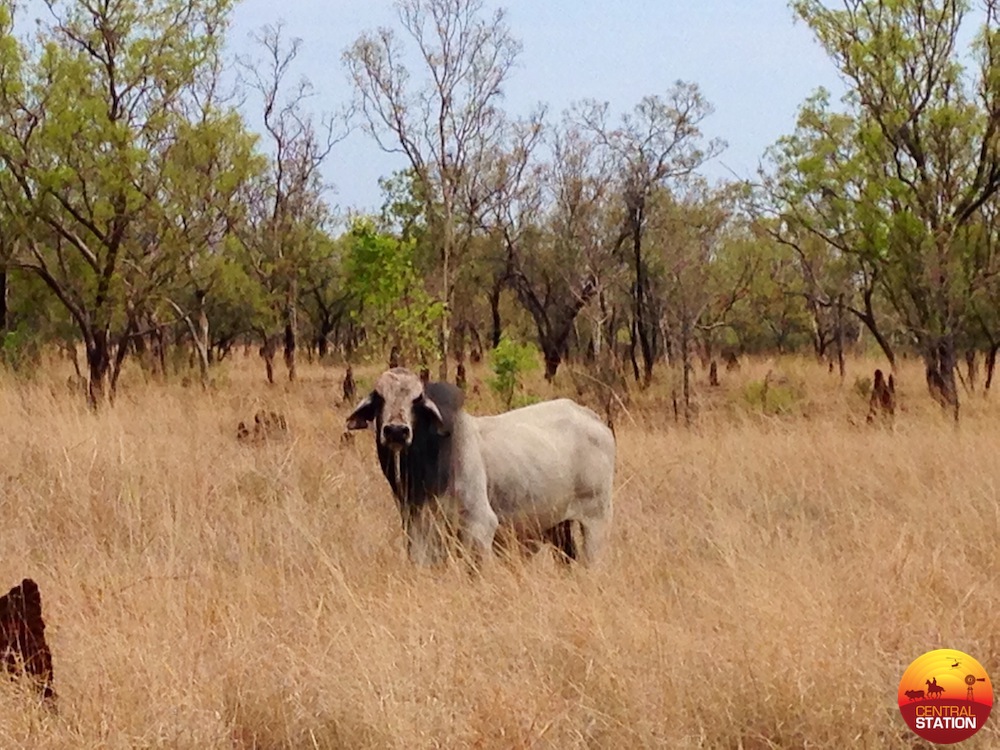 Lots of cattle and wild horses up here.

It turned out that we had already done the big river crossing about 5kms back, but there was one more creek crossing just as you come into town and it was badly eroded with big washouts and a small high curving track to the side.

I gout out to film our last crossing before Kalumburu and Richard was on the last turn. The caravans’ tyres were so close to the edge of a big drop off! I was about to call out for Richard to stop when the wheels dropped off the edge and start sliding down the bank. In that moment forgot all about filming and droped the camera as I watched our travelling home about to tip right over.

If the wheels had continued all the way to the bottom of the drop the van would have gone right over. Somehow, because Richard was rolling slowly forward it somehow gripped the bank and we got to the end of the washout!

So, with our hearts in our mouths we rolled up into Kalumburu just on dusk. The kids were all out playing basketball and the music was thumping all around the community.

We rolled into the Mission gates and hopped out to green grass, tropical gardens, lovely old stone buildings and the warm heady smell of frangipani flowers. 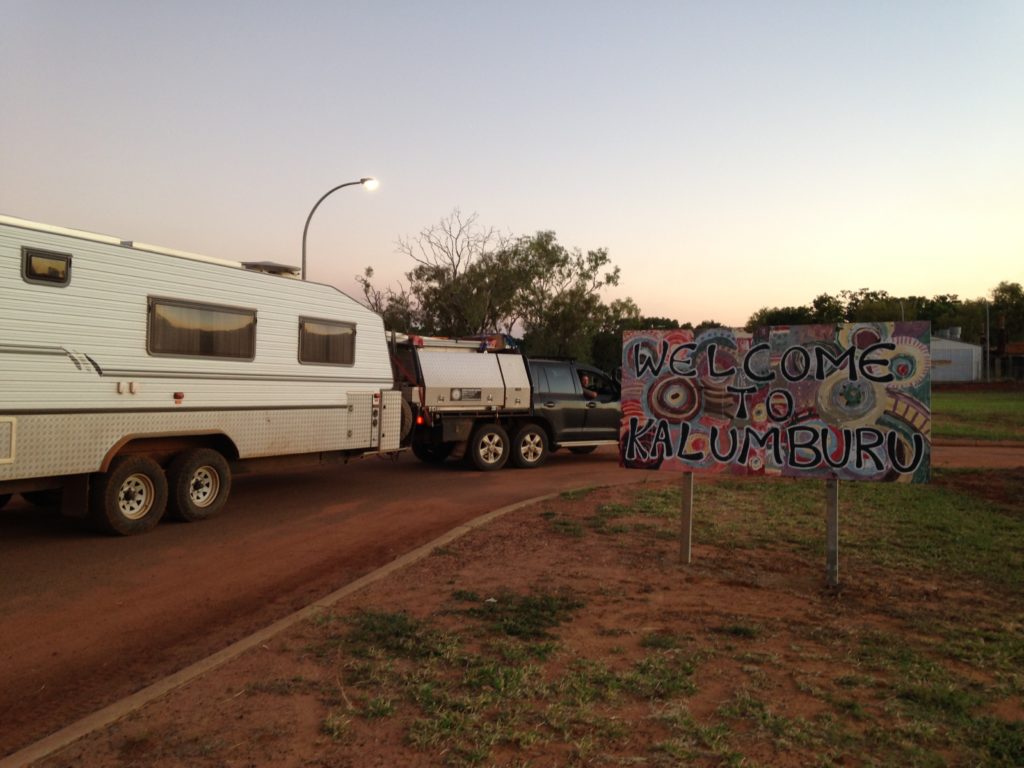 Rolling in to Kalumburu. 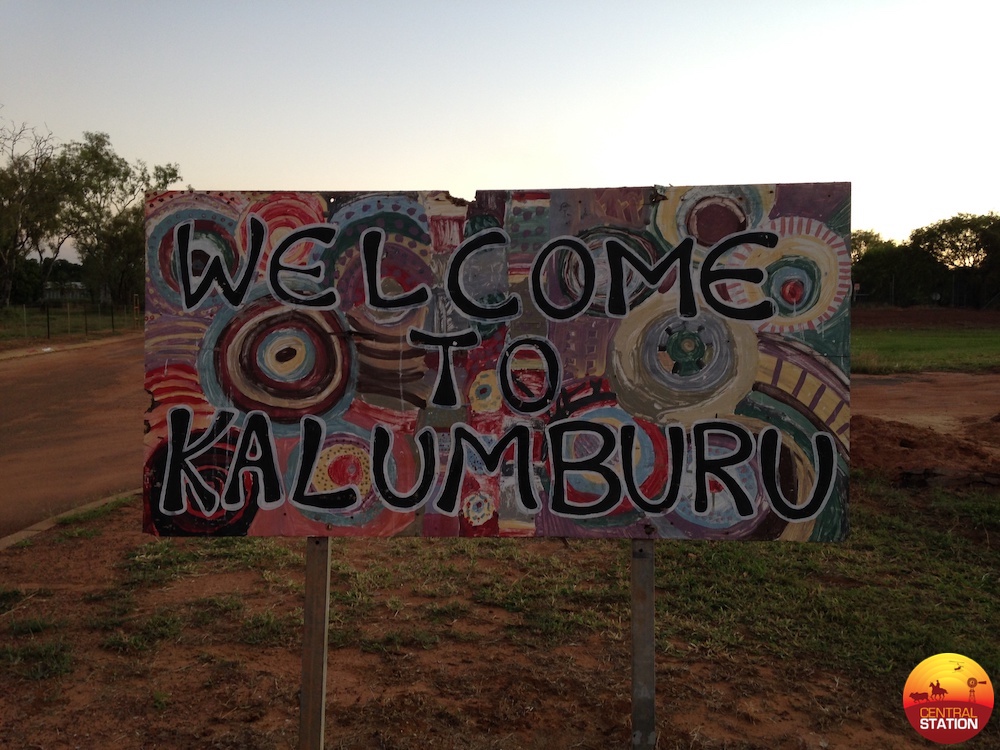 Kalumburu, the northern most part of The Kimberley, WA.

After finding a place to park our rig in the dark we arrived late for dinner at the Mission.Walking after sundown through the heady air and gardens and hearing the beat of music within the community felt like a party after a huge day.

We walked through the security gates saying hello to the resident mission dogs – Boof, Kirra and Shadow – and into an enclave where the whole team of staff and volunteers were having dinner. The smell of curry and rice and roti was amazing – it was all very civilised and we feel so dirty and tired.

By 8:19pm we fell fall into bed ready for our new building and renovating adventure in the morning.

< The fire circus > Best loo with a view!