As I write this, it is International Women’s Day. By the time you read this blog, the social media frenzy will have moved on; regular news items will have reclaimed their pride of place and fresh and evolving issues will be hash-tagging their way across the digital stratosphere, clamouring and competing for attention. But sprinkled across this beautiful vast land, on stations and farms, in towns and remote communities, an incredibly diverse group of women will carry on doing what they do best: not only keeping the dream of Ag alive, but challenging it, adapting it, leading it, supporting it, and basically making sure, that not only does our agricultural industry flourish, but more importantly that the culture and people, families and communities flourish too.

I have been exceptionally fortunate to have been raised in a family where personality and individual talents were valued and respected above expectations based on gender, and for the most part, have worked in stock camps and on stations where, if there was a job to be done, then gender was not the deciding factor in allocating a person to it, but rather ability, skills and an interest in the task at hand reigned supreme. If you have the strength and stamina to swing off a calf cradle all day then do it. If you are a wizard at drafting cattle through the round yard (or you want to be) then go for it. Mustering with bikes, choppers or horses, pregnancy testing, fencing, grader driving, horse training – you name it, if you’re keen and capable, then on most places in the bush, you will get a go. Regardless of your chromosomes. 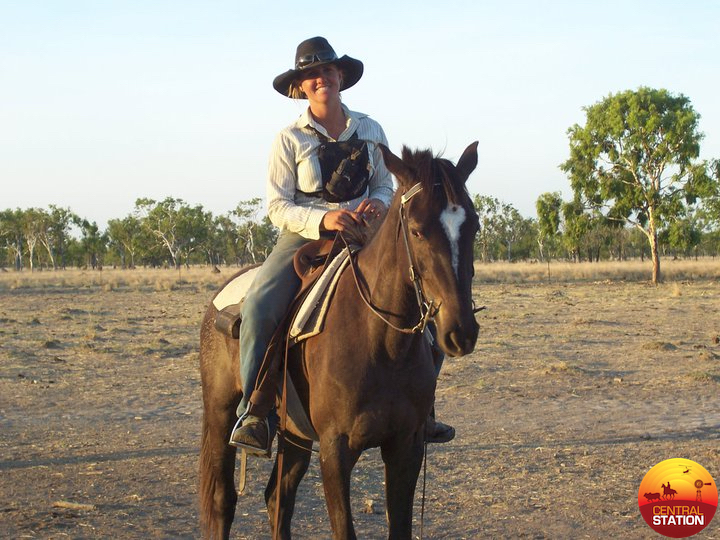 Myself on Bleachy, in a mustering camp at “Vanrook”, near Normanton in the Gulf country. I was in the horse camp most days, but on some days mustered on a motorbike. The handheld two-way strapped to my chest is used to communicate with helicopter pilots, so they can direct us to cattle, or tell us when an area has been cleaned out, so that we can move the cattle on. 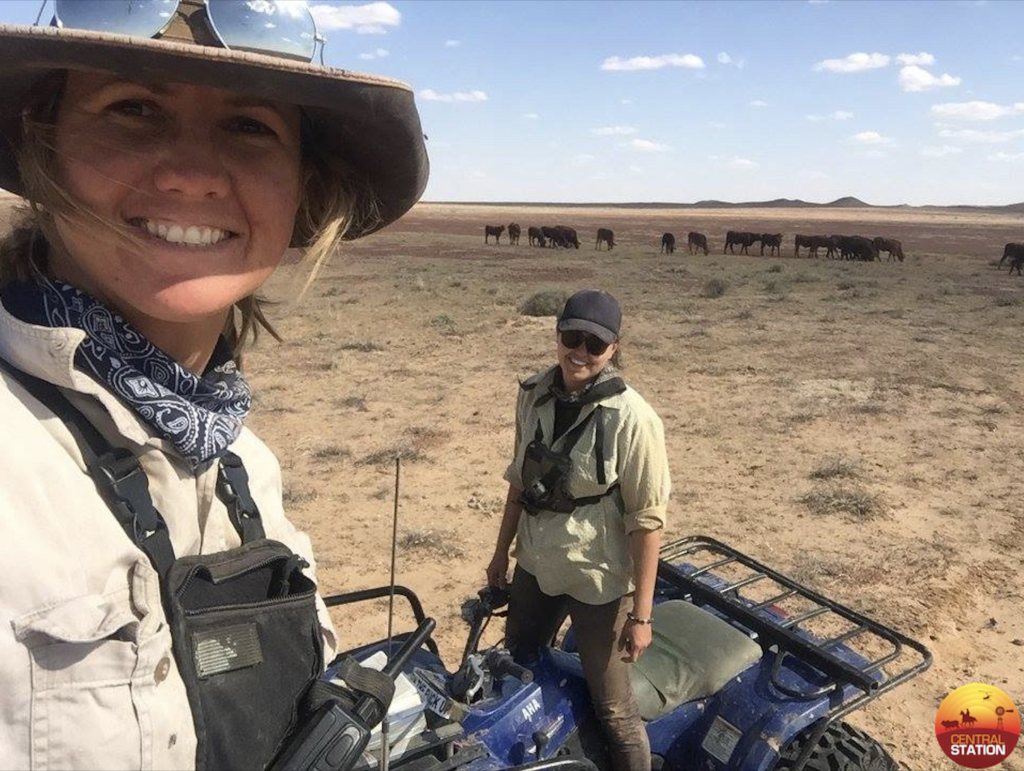 Myself and Miriam Trümper of Germany, walking cattle through the desert on Cowarie Station, near the Birdsville Track, South Australia. We had our family’s breeding herd there on agistment for three years during the drought. All of the stockwork there was done with a combination of motorbikes, buggies, and utes. Some of the musters utilised helicopters or gyrocopters.

Now, that’s not to say there aren’t still some workplaces that take a more traditional view, there are; but an increasing number of women are filtering through to the traditionally male dominated roles of station life.

In fact, in the time I have spent in the northern pastoral industry, I have had the pleasure of knowing and working with many capable, charismatic and determined women, who have been steadily paving the way for generations to come; unwittingly becoming idols and mentors for the following waves of women to aspire to. 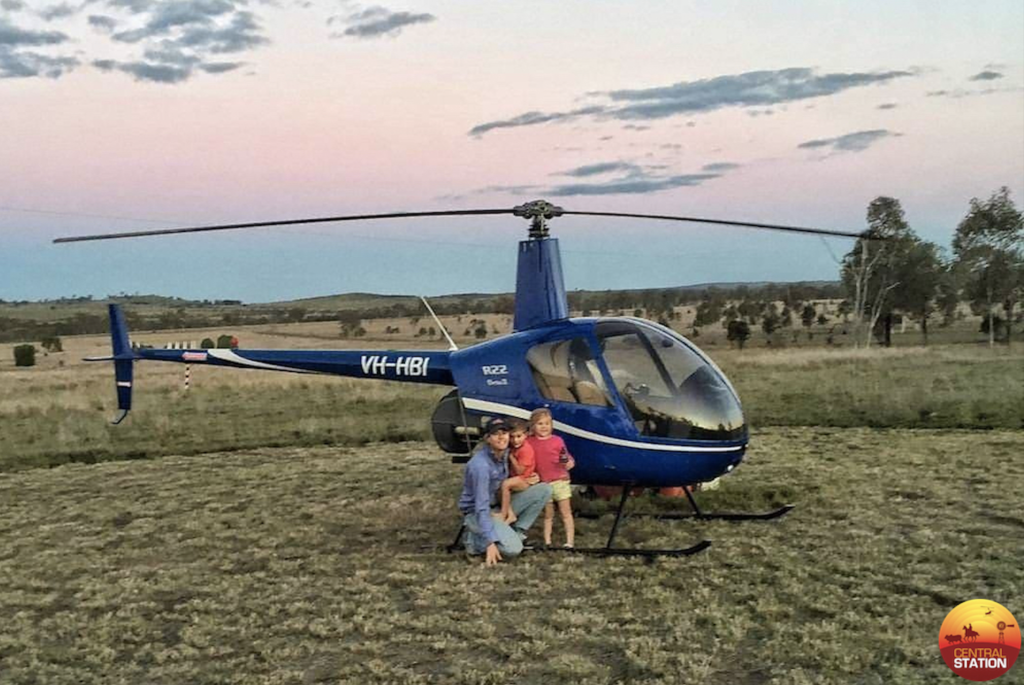 “PJ” Lynda Lucht (nee Knight) with her children Charlie, 6 and Ruby, 7. I first met PJ when she was a helicopter pilot based at Brunette Downs, on the Barkly Tablelands of the Northern Territory. She now has her own chopper and business, Heli-One Services, based at Injune, covering the Maranoa and beyond. 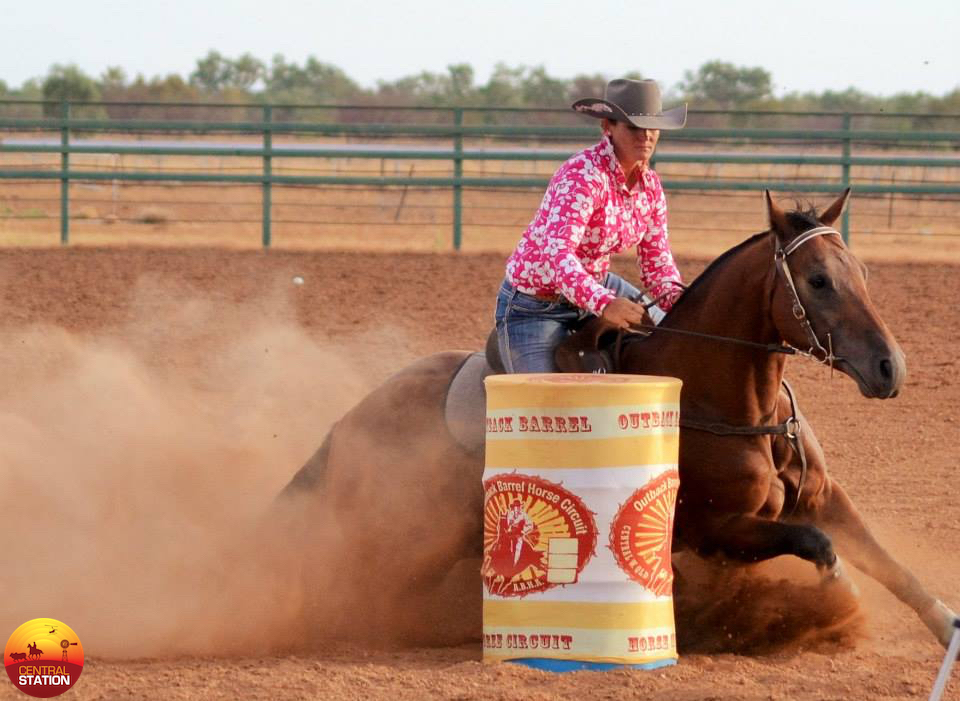 Joelene Gleeson, competing on Hyde, Winton OBHC 2016. A horse trainer and breeder, Joelene spent many years as a station hand and used to compete in bronc rides at bush rodeos. She is now a champion barrel racer and was co-founder of the Outback Barrel Horse Circuit, dedicating five years of her life to developing one of the best family sports circuits in the central west. These events bring a lot of joy and excitement to many people in our region.

A dear friend of mine, Rachel Hoolihan, is one such woman. With a big heart, a keen and practical mind, and spades of dedication, she has worked in various roles across the northern Australian beef industry. Her career thus far has spanned from a life of adventure in various stock camps, to the responsibilities of training positions where she moulded and inspired future generations; such was her role as an instructor at the Longreach Pastoral College. She expanded her knowledge through further study, and also spent time as a Rangelands officer, assessing pasture, influencing grazing management decisions and generally prioritising careful management of the land. 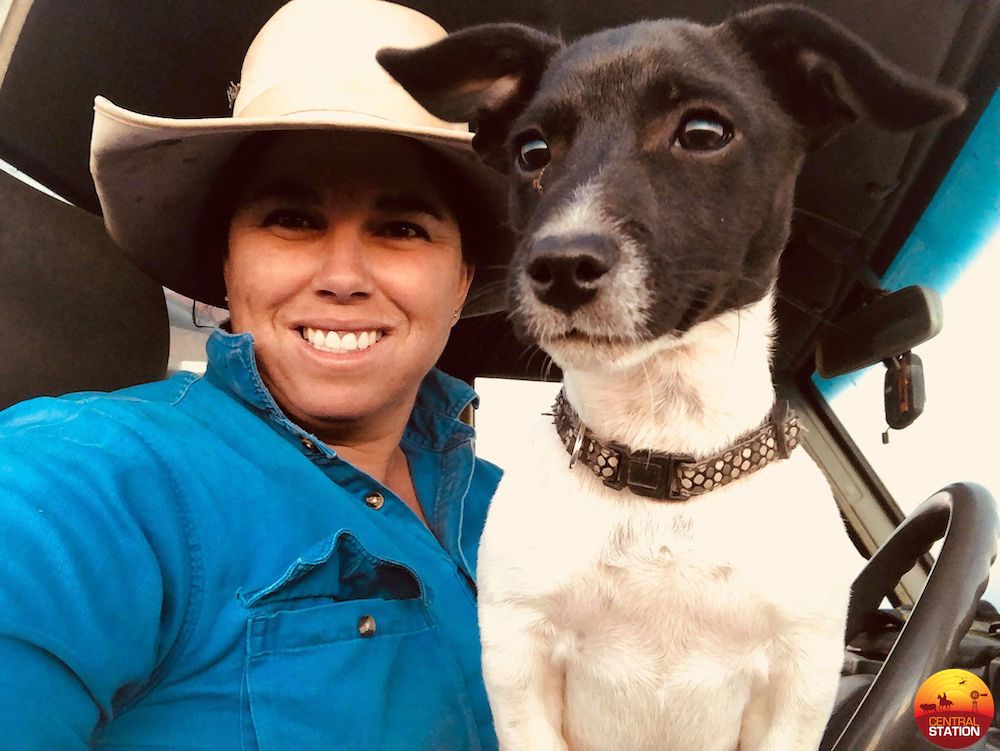 In 2017, Rachel became operations manager at Dalgonally, an AACo station in the gulf country, near Julia Creek. As such, she has been responsible for the operational management of 128,000 hectares of country. Recently, this has meant being on the frontline of the most horrific natural disaster that the graziers of the Gulf of Carpentaria have ever seen. Catastrophic floods, brought about by record breaking monsoonal conditions, created what many would later describe as an “inland sea”, and estimates of livestock losses in the region have reached into the hundreds of thousands.  During the height of the floods, roughly 70% of Dalgonally was under water. It takes a special kind of person to make it through an experience like that, while being responsible for the safety and wellbeing of staff and animals alike. I take my hat off to Rachel, and to the countless other men, women and children who did their best to save the animals that they could, and to support each other, during such devastating days.

But through floods, fires, droughts, and good seasons alike, one thing I have come to appreciate about the women of the land is this: that they have a kind of superpower, of being the glue that keeps the whole show stuck together. From jillaroos to governesses, teachers, book keepers, cooks, and the whole gamut of station staff from ringers right up to managers there are ladies of the land and in rural communities everywhere, checking in on people, supporting each other, networking, assessing issues and creating solutions. They are connected, caring, and utterly irreplaceable. 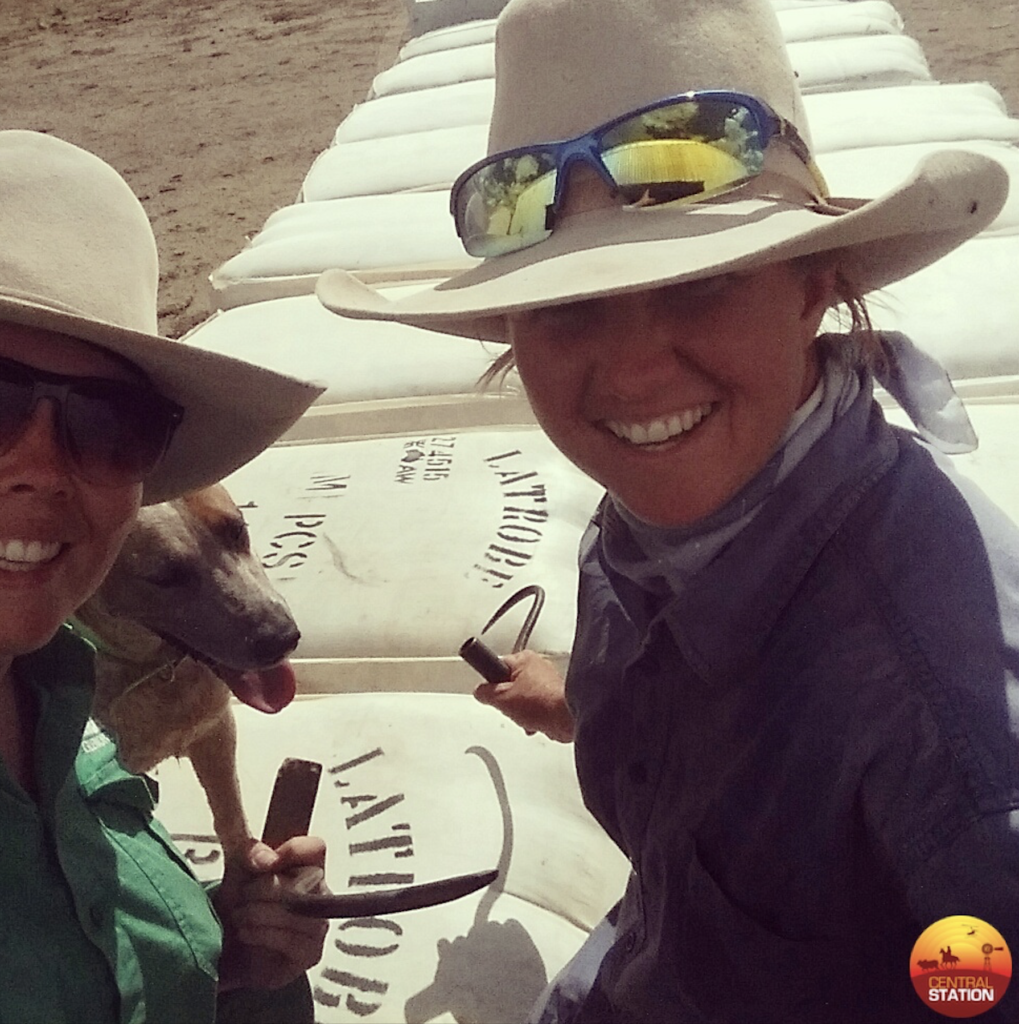 Amy Cochrane (left), a dear friend of mine with a great love of rural Australia, who teaches at the Longreach School of Distance Education. I completed my primary education through this school (in the days of UHF radio lessons and snail mail) and can vouch for the significant role these marvellous teachers play in the lives of bush kids. Teachers and governesses alike, often come from far afield, to become actively involved in regional communities like ours. In this picture, Amy and I had just finished rolling about 60 wool bales onto our truck to send off to market.

And so, much as it gives me joy to see women successfully challenging the status quo and thriving in non-traditional job roles, I particularly want to pay tribute now to the ones that make the world go round to the countless wives, partners, mothers, daughters, sisters and staff that give so much care to those around them. The women with almost magical powers of multi-tasking, that get up every day to get the million and one tasks done that others seems to miss, or take for granted. That juggle their already heavy load with an infinite number of odd tasks that the people nearby throw at them, unassumingly, and often without a true comprehension of how much is already riding on their shoulders.

Especially on the family runs, wives and partners often hear: “Can you bring some wire out to the western yards?” or “Help me fix this, hold that there…” and “ The cattle have busted the pipe I just need this fitting…”, “Can you ring town and see if there’s [any number of things] then drive in and get it? Oh and while you’re there…”

All of this on top of whatever other important roles they already play. My mother for example, not only kept the homestead and family ticking along smoothly for many years, but she also manages the lion’s share of the bookwork: updating individual animal records, mob movements and treatments, pedigrees and joinings, organic audits and paper trails, paying bills, calculating the BAS, filling out compliance forms for PCAS and EU, and of course, budgeting. That last one is a team effort between her and Dad. But she also musters sheep and cattle, runs the calf book at branding time, and helps put through the shearing. 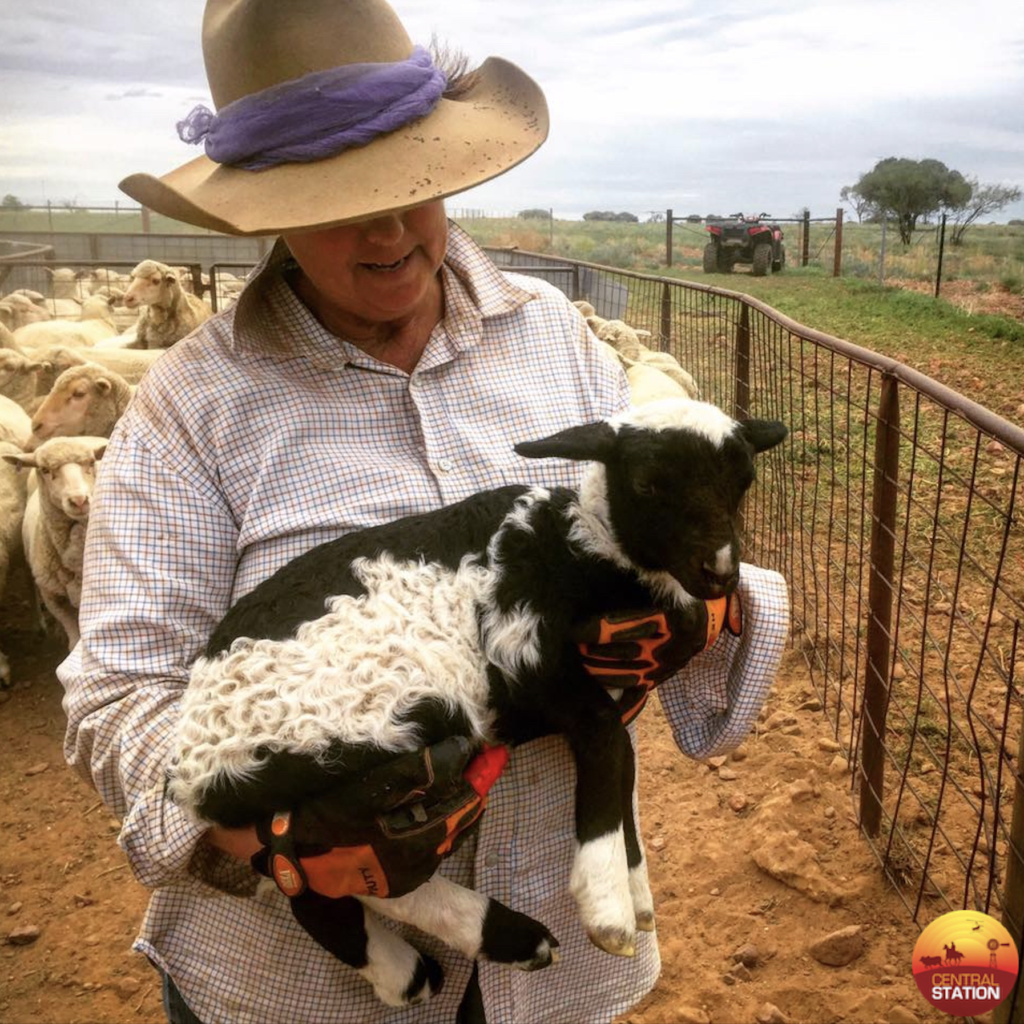 Mum, Wendy Brown (nee Mansfield) with a dorper cross lamb, at the Arlington Park yards. These colourful little critters were a result of the neighbour’s ram/s jumping the fence. We were catching the smallest lambs out of the bigger yards so they didn’t get jostled around by the adult sheep. 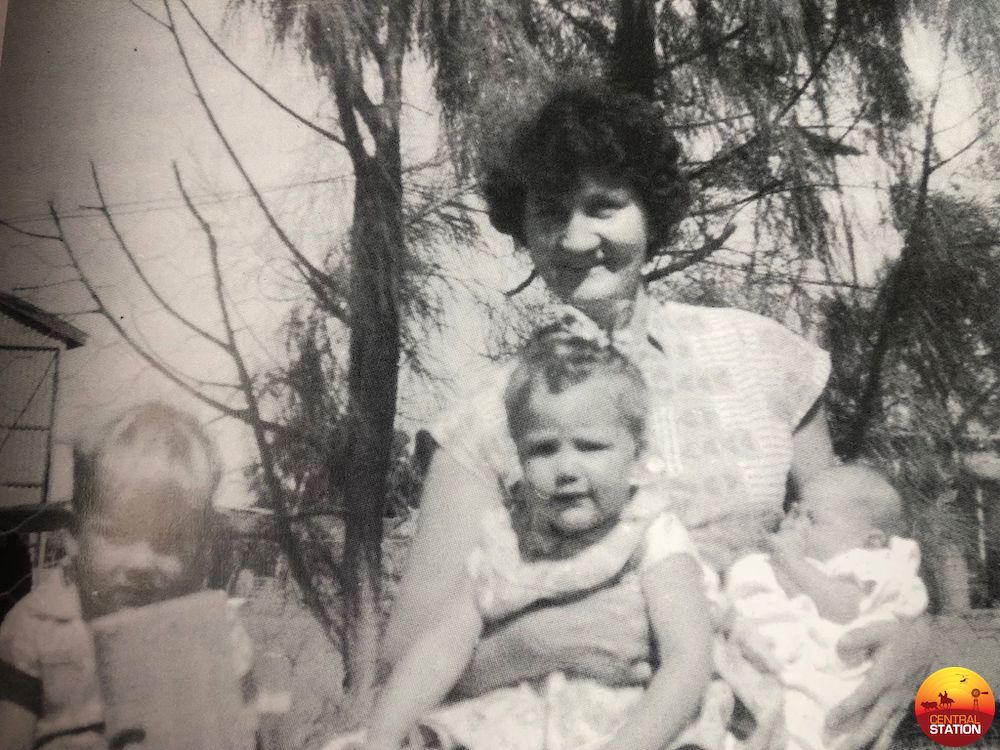 Norma Brown (nee Proctor) my Granny, with my father Donald and his sisters, Jan and Judy, 1959. 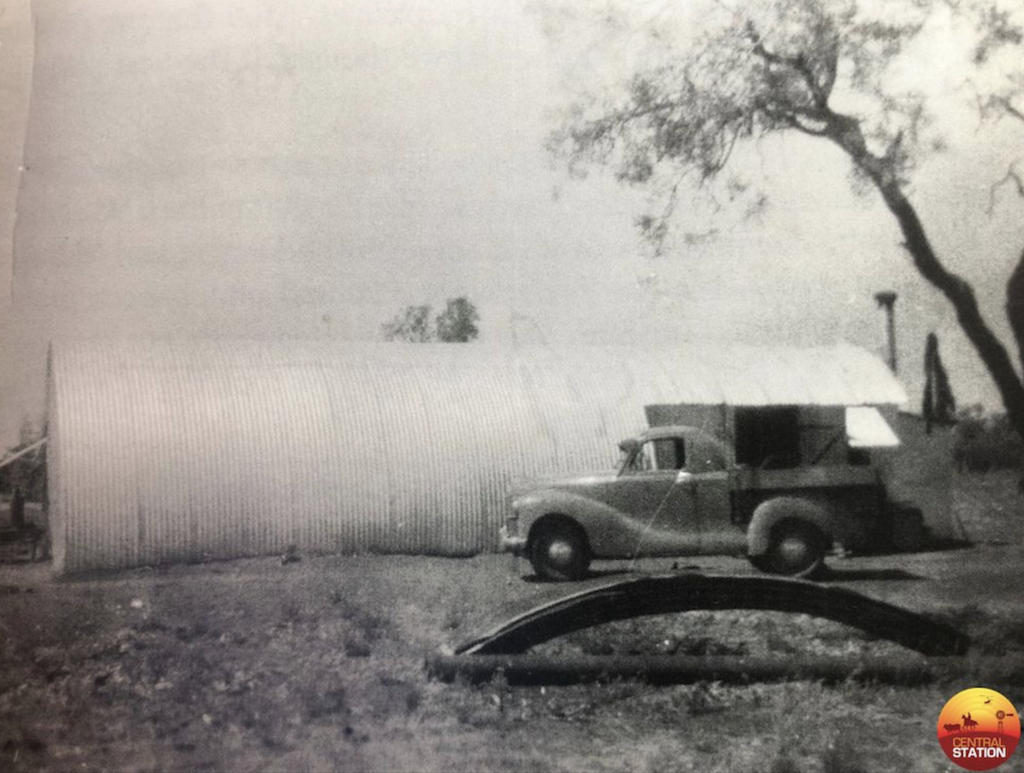 Marqua homestead, via Urandangie, Northern Territory, 1955. Granny and Pop moved several times but they began their family here. Granny managed to turn a tin shack into a home, coax some vegetables from the desert sand to compliment the tinned food and dry rations, and keep three young bush children relatively intact while cooking for the camp.

About a year ago, our family bought a small cattle property on the coast, and trucked a portion of our breeding herd there, hoping to safeguard them from the record breaking drought that we have been battling on our western holdings, south of Longreach. Mum and Dad now spend most of their time down there, and since we have no staff, most days it is just myself looking after the 45,000 acres of organic grazing land that comprises Latrobe and Arlington Park. My partner teaches in town, and is home every night, but during the day it is just myself and the crazy menagerie of animals that are my family, led by my three wing ladies: Trixie, Delta and Pepper. Now, as much as I have enjoyed the challenge (and for the most part, the solitude and autonomy) of caring for Latrobe largely by myself, I can tell you the following with absolute certainty:

Women like my mother, and my grandmother, are what makes the difference between a house and a home. Between a barren dusty yard, or a green oasis to come home to. Hearty meals for grumbling bellies, clean sheets for weary bones, and smiles and hugs for frazzled hearts. And at the same time, they are supposedly the “spare hand” for any and every task imaginable on the station. Yet these women simply sigh, raise the bar a little higher, and get it done. All the while being there for those they care about.

So Mum: here’s to you. Yes, we do notice. And you are amazing. 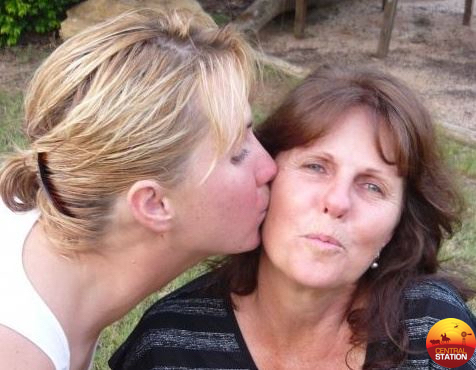 Kissing my beautiful mother. We love you Mum!