Until 2006 Wooleen was predominately a sheep station, but we always had a couple of hundred cattle. For 100 years everyone adamantly maintained that this was well and truly ‘sheep country’, until the price of wool plummeted, and later on the dingoes came back. Now almost everybody has cattle.

We had one cattle yard in 2006, one holding paddock capable of holding cattle, as well as one full paddock. Perhaps half of the boundary was a cattle fence. We also had 700kms of failing wooden sheep fences. The destocking periods have been good in giving us the time to upgrade infrastructure to cattle standard. The destocking has put a bit of a brake on financial flexibility (to the point where the bank would have foreclosed on us in 2011, but for a bit of luck). But if you have time on your side, most things can be done cheaply.

Initially, money made from cattle trading was only used to cover the financial shortfall that tourism lacked. Increasingly however money from cattle trading has been used to fund not just an upgrade of infrastructure to cattle standard, but also a switch from set stocking to rotational grazing.

Traditionally the stock have been spread over the entire station for the whole year, and each paddock was always apportioned a certain amount of stock. This is called set stocking. In my opinion set stocking is unsuited to our country because it means that there is grazing pressure on the best pasture species all of the time. This has led to some of them (such as kangaroo grass, native millet and ribbon grass) becoming entirely grazed out, and many others to become scarce to the point where they no longer have an impact on production.

Palatable perennial species need a rest in order to allow them to set seed and recover their root mass from grazing periods. This is the basis for rest-based grazing or rotational grazing. However this only works if you have good control of the grazing pressure, not just from the cattle but also from the unmanageable grazers, goats and kangaroos. Consequently the dingoes are a critical element in the rest based grazing model, and I don’t believe it would work here without them.

While its only been recently that we have had enough funds to tackle some of the longer fencing programs, we previously spent a lot of time siting and bulldozing the fence lines we intend to build and installing strainer posts and gates long before they are needed. This is time consuming, but doesn’t cost that much. The old fences usually ran north-south and east-west, and the paddocks were roughly uniform in size and shape. This meant that the fence was rarely in a good location, and often they crossed large creeks and granite outcrops unnecessarily. When we build fences today, we avoid large creek systems and drainage lines (or rivers) because they are liable to wash the fences away on a regular basis. The same is true for roads, and we try to realign problem roads that redirect water flow, because it ruins the roads as well as reducing landscape function.

We also try to avoid having different sorts of country in the same paddock. For example, some of the old paddocks were predominately mulga scrub, with an area of river floodplain in the corner. The animals prefer the river and would tend to overgraze it before venturing into the mulga. So now we make sure the river country is in one paddock, and the mulga country in another. This makes it easier to manage the different types of pasture. (It also cuts down of fences that cross rivers.)

We have built two more cattle yards, using scrap steel and wire rope that I bought on industrial auctions. (‘I’ is correct here, rather than ‘we’, because Frances is dubious about many of my auction purchases). It’s taken a bit of time to get the materials at the right price. In one bargain bid I bought 125 13mm binder chains for $2 each which we use for straining up the wires.

Cattle also drink a lot more water than a sheep, and they drink it quickly. For this reason sheep troughs are not ideally suited to cattle, and we have been making larger troughs for the cattle. We use old tyres for this, because they are free. A reciprocating saw is used to cut the top out, and a 2” hole is drilled for an outlet. The stainless steel inlet pipe (which I get fabricated) for the float valve is positioned in the centre space, which is then filled with concrete. This makes for a cheap soft sided trough. Only one leaks, because I rushed the packing of the concrete into the centre. 2” is a bit too small to empty such a large trough, but luckily I got some cheap flexi-drive pumps at auction that are ideal for speeding up the process.

Cattle are also more partial to quality water. We have laid pipelines so that fresh water is available where it has never been before. Our best country is the river floodplains, which usually have saline soils, and the underground water that can be found in these areas is often saline as well. This is not a product of poor land management; the country has never been cleared and the landscape was salty when the first explorers arrived.

Because of the salty soils, many of the plants that grow there are salt loving species such as saltbush and bluebush. They are good fodder plants, but their foliage is also slightly salty. This all adds up to too much salt in the cattle’s diet, and so they avoid the saltiest bushes, and concentrate on the perennial grasses, which is unfortunate because that’s what we need to recover. If we provide fresh water to these areas, the cattle eat the vegetation much more evenly, which is good for the health of the animals, good for the recovering landscape, good for drought mitigation and good for the bottom line.

Few of our wells and bores have enough supply to water larger mobs of cattle that will result under the rotational grazing system anyway. This means that we will need better water supplies (or simply more supplies), more pipelines and judicious planning to provide the animals with water. For example some paddocks that are not well watered may only be used in good seasons when natural waters (puddles) are present. While there is a significant extra cost in providing additional infrastructure such as pipelines, the benefits are great.

Currently a great deal of production in our area is lost because of the distance that animals are walking to water. After 100 years of set stocking the watering points, there is often no feed at all with 4kms of the trough in dry periods. They are losing weight walking between the water and the food, the further they have to walk the more production is lost. Pipelines can increase production by providing water where the feed is, ensuring that cattle can keep their energy as weight gained rather than expending it walking to the trough. A line of troughs along a pipeline can also be a useful and low-stress mustering aid. As troughs are turned on or off they can be used to move cattle. 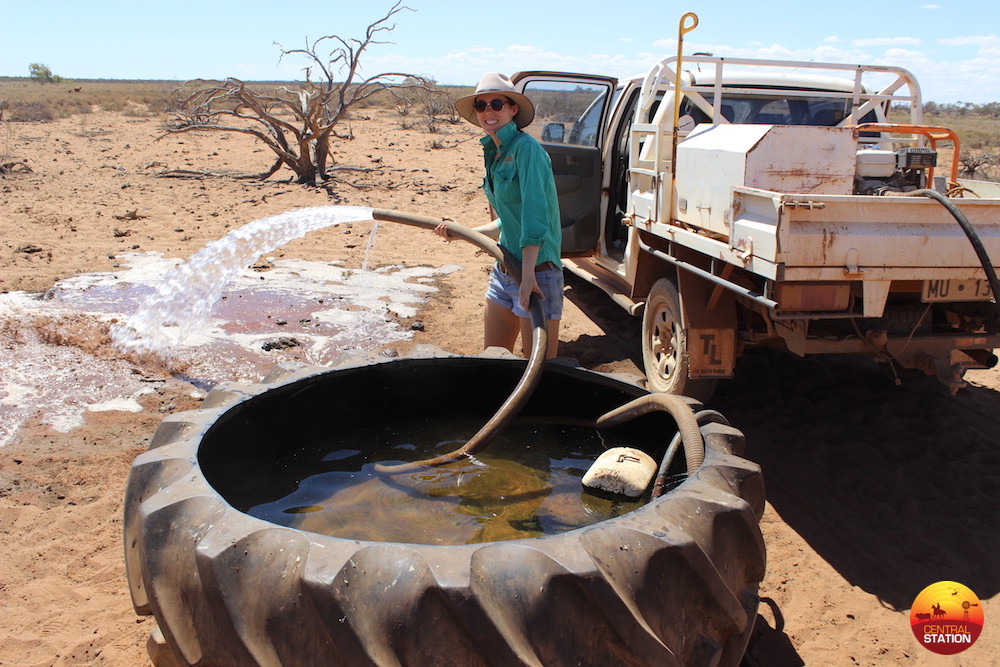 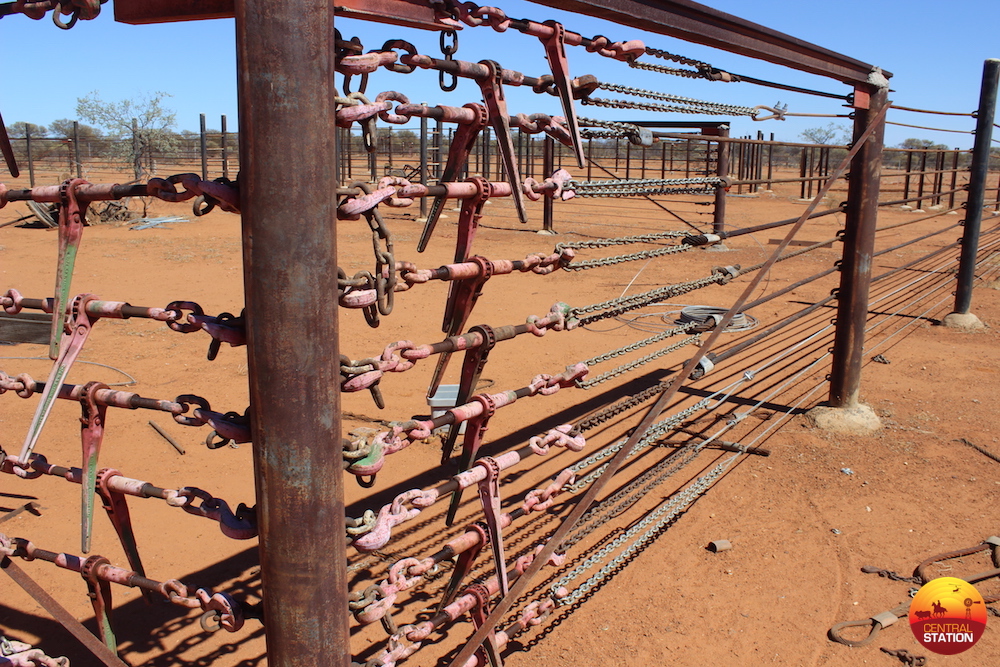 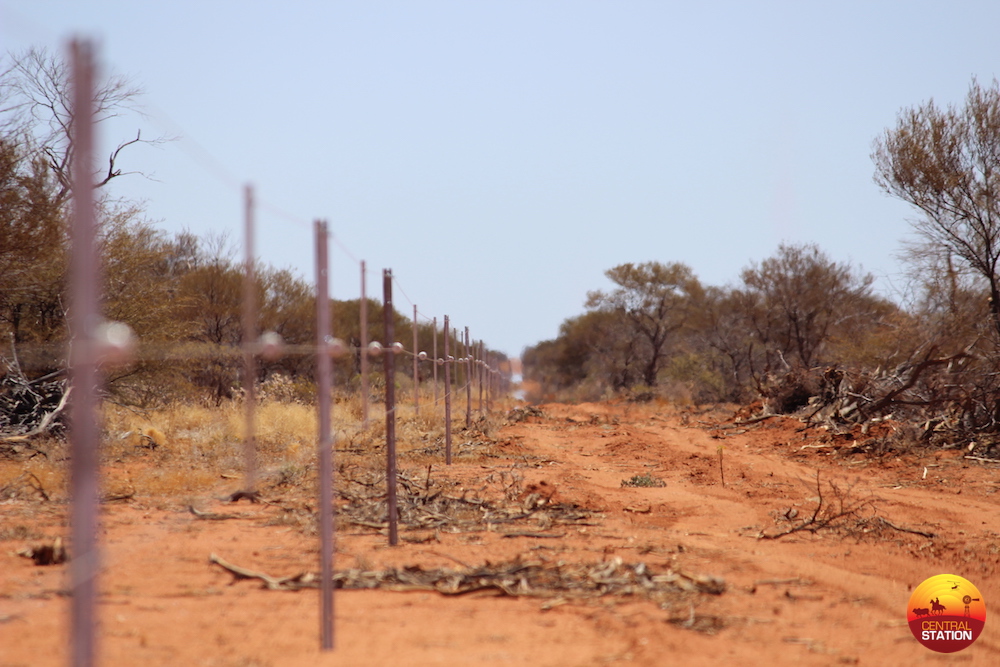 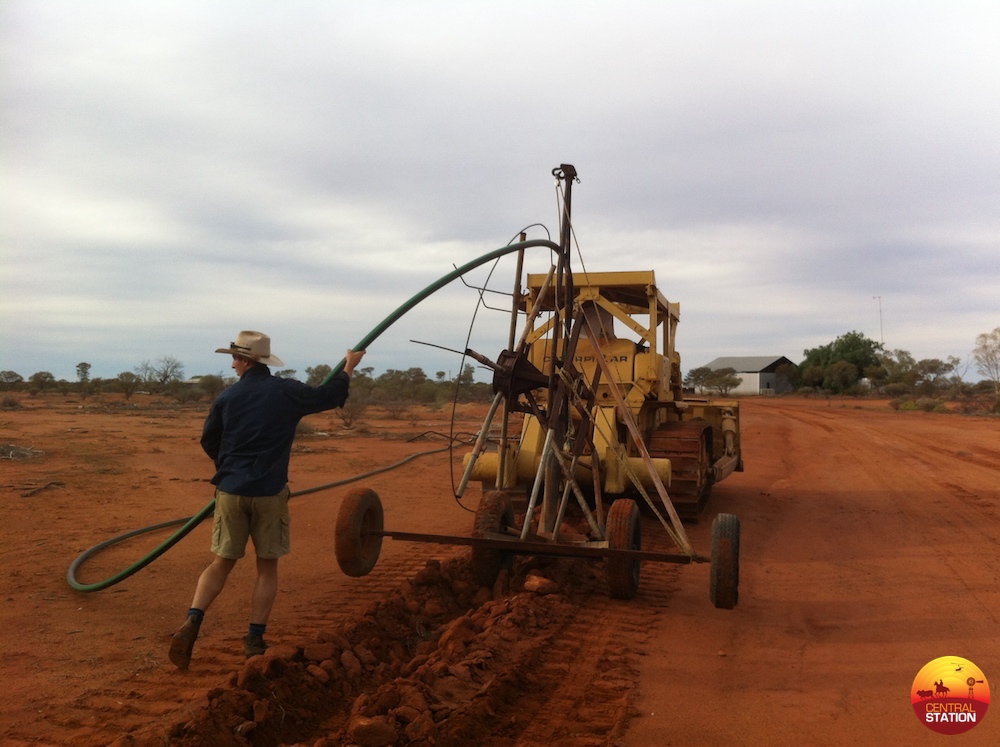 Laying pipelines. This is normally a one-man job, as the pipe feeds itself off the dispenser.