Friends and family in the east often ask me, ‘If I flew into Broome, how long would it take me to get there?’ I politely suggest they should fly into Perth instead. ‘But you’re right out in the outback, yeh?’

Wooleen Station is roughly 375,000 acres and is located in the Southern Rangelands (aka, also the outback) about 700kms north east of Perth. Our closest town is Mullewa, 200km to the South. We have two major water courses, The Murchison and The Roderick river, as well as the Nationally Important Wooleen Lake on the property. The rest of our country comprises of mulga shrublands featuring some amazing granite outcrops and breakaway country. The average rainfall is 210ml per year, which means the landscape is classified as semi-arid.

Wooleen began as a sheep station (and, no, the name wooleen has nothing to do with either sheep or wool) and in 2006/2007 transitioned into cattle. David took over the management of Wooleen in late 2007 and we met in early 2008. Anyone who has heard of Wooleen probably also knows our personal story. And if you don’t, it’s along the lines of ‘girl from Victoria, meets boy from outback WA, they fall in love and live happily ever after!’ 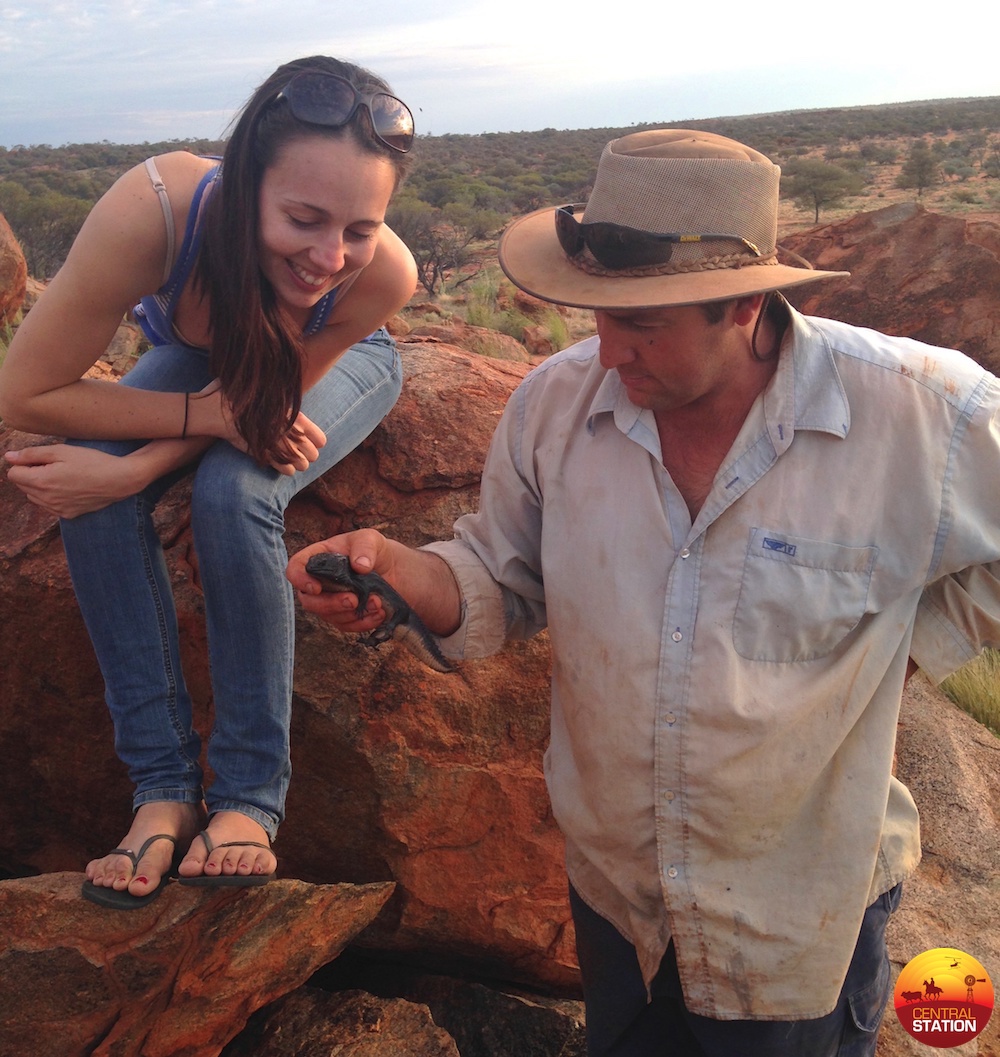 Frances and David Pollock looking at a Western Spiny-tailed skink they found in the granites.

Dave and I are dedicated to restoring and fixing a lot of historic degradation at Wooleen and then altering the traditional management to find a more sustainable production method. We had the property entirely de-stocked for three years, but we’ve traded cattle since 2011 – we’ll have a blog on that later, so I won’t get into detail now. As well as the cattle we also run a nature-based station stay from April – October comprising of Homestead rooms, rammed-earth guesthouses and remote camping. 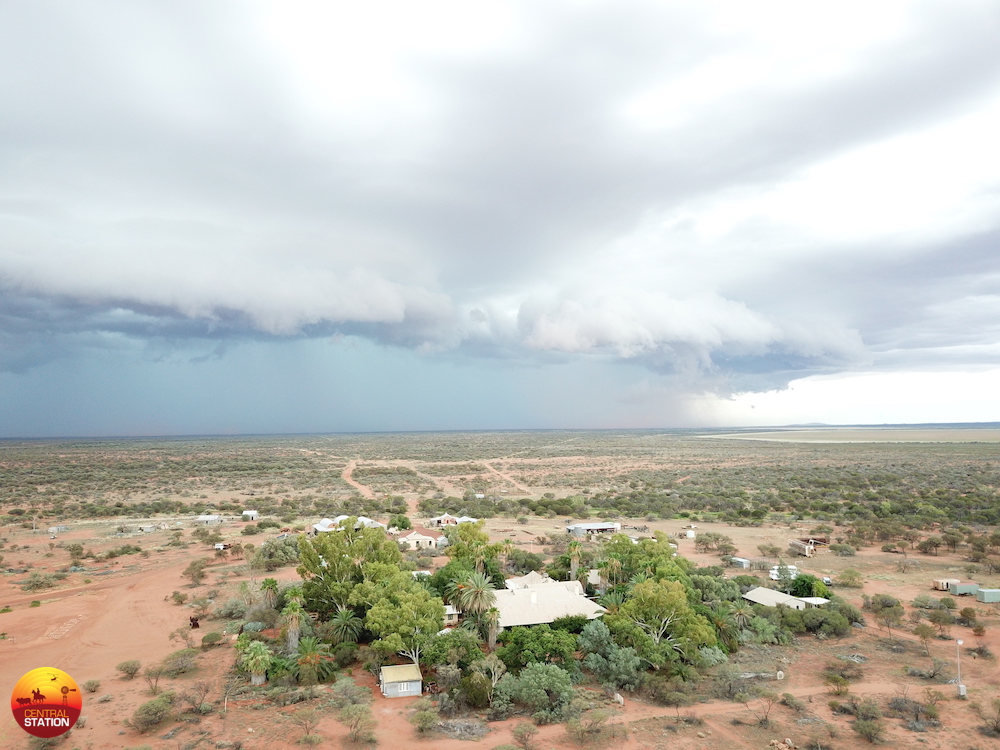 Geraldton is our major centre for shopping and we are fortunate this is only a 300km drive on really great roads. Our local shire is amazing with the upkeep of our gravel roads, as well as the slow move to seal 10km sections each year. We are even more fortunate to have a weekly truck which comes from Geraldton and delivers food (and anything else we might need from town, provided it fits on the truck).

Monday’s is order day which is my least favourite task around the station; it forces me to sit down and plan the week ahead – in a rough sense. The goods arrive on Thursday morning and it’s all hands on deck to unload the truck and get things packed away into cool rooms and freezers. Because of the tourism side of our business, our weekly shopping between April and October is sizable.

We provide as much of our own produce as we can. Once or twice a year, if we are running stock, David will take 3 steers to our ‘local’ abattoir in Greenough 350km away. From here the butcher picks up the carcasses and processes them into any cuts we ask for. Sounds a bit fancy for a station, but due to the tourism it’s important all our food complies with food safety standards – this means butchering in the old meathouse isn’t acceptable. David will also confess that he’s not the best butcher around, and using a real butcher avoids bone chips and mystery cuts. With this arrangement we end up with nearly 25 boxes of meat returned to Wooleen all cut and packaged neatly.

We have a vegetable garden which had a serious upgrade in 2018 to six beautiful raised beds. This is my favourite little place to hang out, especially when things at the homestead get a bit chaotic during wildflower season. It’s a place I can go to water, pull a few weeds and dig around. My biggest problem is actually picking my vegetables! I love them were they grow and often, when it comes time to pick, I can’t bear to pull them out and leave a great whopping hole in the patch. I’m getting better at it though. We’ve also got about 30 citrus trees with mandarins, oranges, grapefruit and lemons. 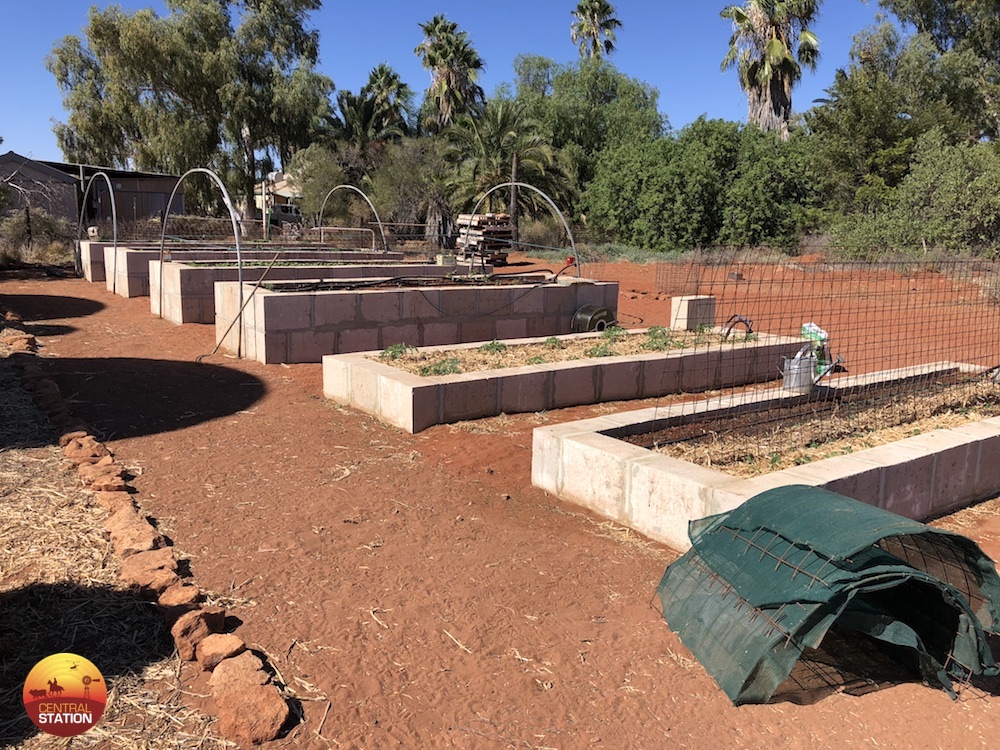 My new raised vegetable garden beds, just as the seedlings were planted in May 2018. 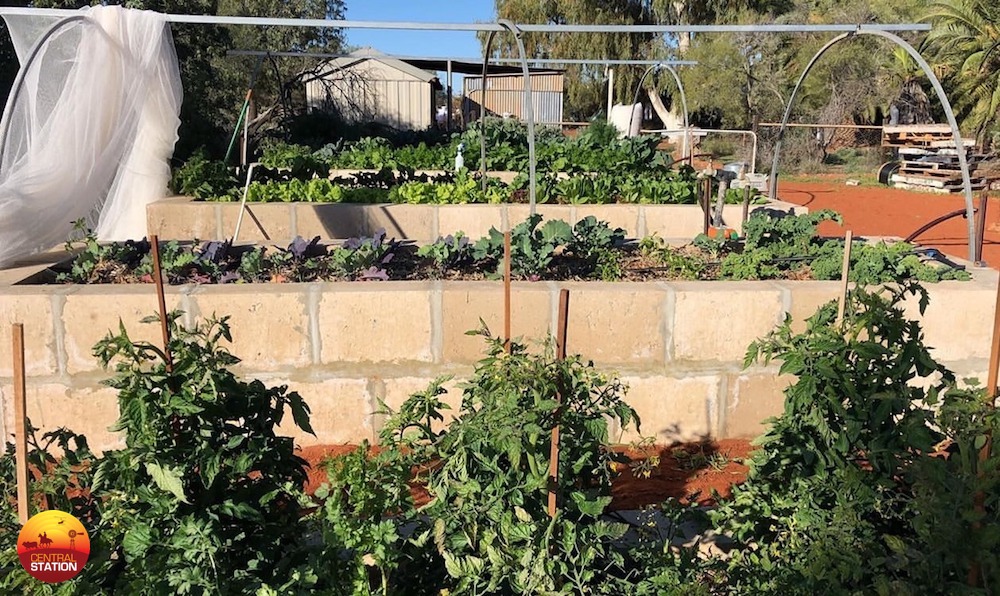 At the homestead we’ve got both bore water and rainwater. We’ve never run out of rain water because it’s strictly used for drinking and cooking. The roof line of the homestead is so enormous that only a light shower will pop a bit of water in the tank. Everything else is supplied by bore water; sinks, toilets, showers, washing machines, sprinklers and cattle yards. We have 3 bores which supply the house – two which are 3kms away and one which is 4kms away. Pipelines run back to the homestead and the water gravitates throughout the day.

We produce all of our own power and it’s amazing what appliances you can live without if you don’t have the power for it. We use gas for all our stoves, ovens and hot water systems and only have evaporative cooling in summer. This minimises the draw on the battery and avoid running the generator any more than we have to. In 2015 we installed 16KW of solar panels and in 2018 upgraded the rest of our system with new inverters, switch boards, and 29KwH of lithium battery.

In peak tourist season we still need to run our diesel generator for 2 – 3 hours in the evening. At the moment, with only David and I at the homestead, it’s been nearly 4 months since we’ve turned on the diesel. I enjoy monitoring our power usage, and it’s amazing how quickly you get used to air-conditioning again! The company who installed all the components of our system over the last 6 years can remotely monitor it from Perth with a Wi-Fi link. Imagine what the fellas back in 1886 would think of what we have now! 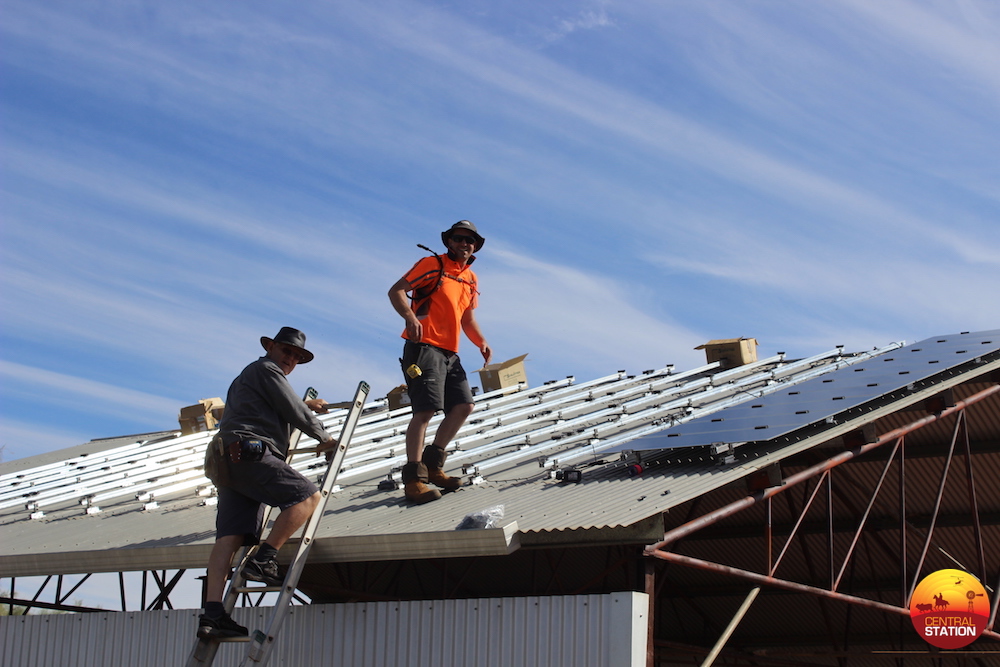 An amazing volunteer crew came to help us install our 16KWs of solar in 2015.

In October 2017 Wooleen Station was honoured to host the consent determination of native title for the Wajarri Yamatji people. The on-country Federal Court hearing acknowledged their connection to 68,743 square kilometres of land in Western Australia. Justice John Griffiths flew to Wooleen to preside over the hearing which was attended by over 300 people. The Wajarri claim is one of the largest in Australia and it’s the first claim to succeed in the mid-west area of Western Australia. We have always operated with an open door policy for Wajarri people to visit, camp and hunt on the property.

The determination outlines the importance for Wajarri people to visit places of cultural or spiritual importance and maintain, care for, and protect those places by carrying out activities to preserve their physical or spiritual integrity. Now that the Wajarri people’s rights have been formally recognised we will enter into an Indigenous Land Use Agreement (ILUA). This sets out exactly what rights Wajarri people have in the land, and is a negotiation between not only pastoralists and Wajarri people, but all groups with a recognised right in the determined area. We believe this agreement might be negotiated in 2019 once the Wajarri have nominated their PBC.

Whilst we’ve got some standard routines around Wooleen, depending on the time of year, every day is different and unique. At the moment things are pretty hot and quiet and it’s just the two of us. Watering the garden is standard every morning in summer. I’ve just finished helping David complete 20kms of electric fence from his new set of cattle yards back to the homestead. He’s working away at engineering some new solar pump trailers and installing some new cattle troughs. I’m just over half way completing a social media marketing diploma which is a great activity to escape the afternoon heat.

Summer’s also a lovely time of the year for the Wooleen tradition of ‘counting the cows’. We bundle up our four kelpies, a beverage, some cheese and biscuits and go and watch the sunset as the cows come out to graze on the Wooleen Lake bed.

‘Counting the Cows’ on the Wooleen Lake bed at Sunset 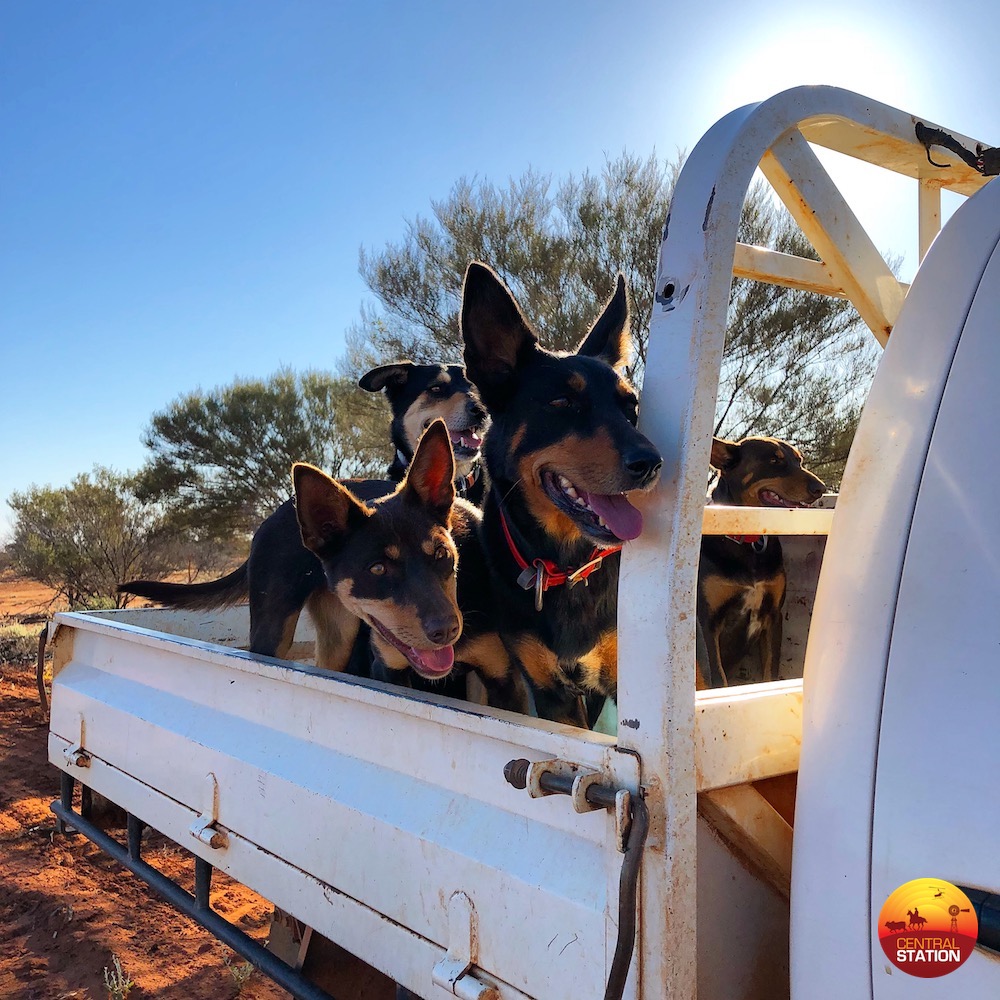 < What the drought has done to us > Watching the grass grow