I answered the knock at the door the night my brother and his two friends were killed.

It was just before midnight when two local police officers arrived at our Murchison homestead.

Shearing was due to start the following day.

Around our kitchen table, we learnt that three beautiful people in the prime of their lives had been taken from us and that our families would never be the same again. It was Saturday, July 8, 2000.

A loaded grain train struck the Toyota my brother Christian was driving at the Yarramony Road level crossing near Jennacubbine, in WA’s Wheatbelt. ­

Christian and his friends Jess Broad and Hilary Smith were killed instantly.

They were just a few kilometres away from the Jennacubbine Tavern, where a group of about 50 of their friends had gathered to celebrate a friend’s 21st. They never made that party.

The police drove away, and we were left grappling with the shock of this horrific tragedy.

Neighbours brought casseroles and flowers and grieved with us.

Then they rolled up their sleeves and helped us get on with the job of getting our sheep in holding yards shorn and trucked out so we could arrange my brother’s funeral.

The homestead landline rang constantly with heartfelt condolences and offers of help.

I saw first-hand that nobody looks after their own quite like the big family of the bush. 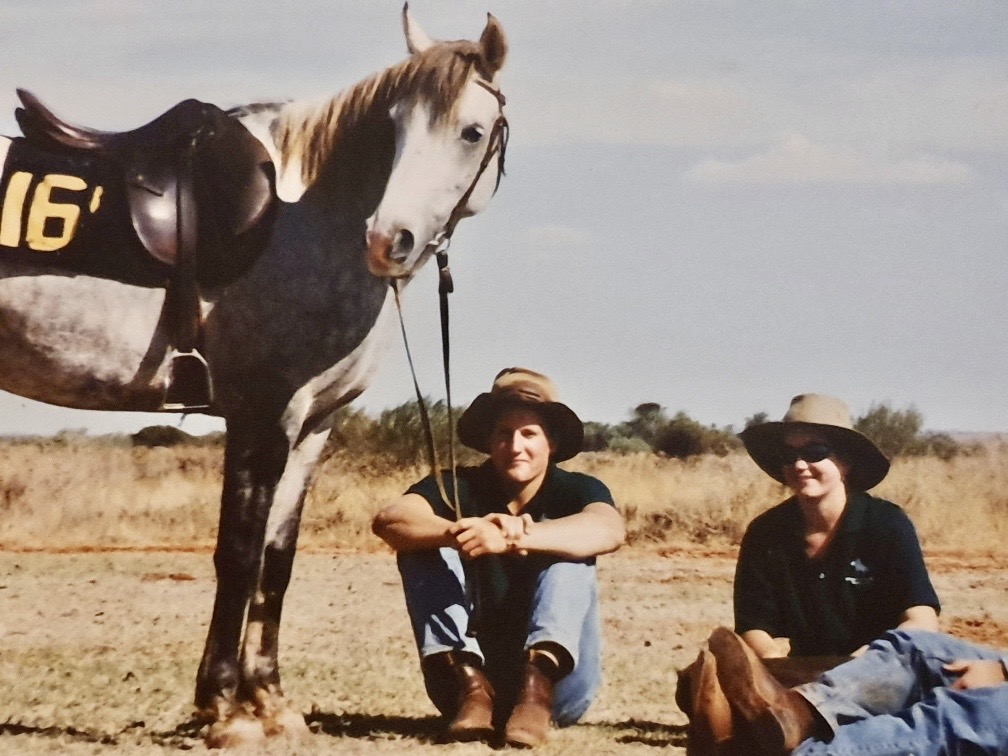 The details of the accident emerged following the coronial inquest in 2001.

Our families discovered that the system we thought was in place to protect rural road users was fundamentally broken and that another family had previously paid the ultimate price, at that same level crossing.

To our horror, we learnt a young man had also been killed at the same passive level crossing just three years earlier.

At the time of this accident in March 1997, a Road Safety Audit concluded the signage did not meet the requirements of Australian Standards.

Despite the loss of one precious life already, the Yarramony Road railway crossing – which was in Main Roads’ jurisdiction – was still not deemed worthy of either a stop sign or flashing lights.

It took the deaths of our three family members and several more years before flashing lights were installed at that crossing.

Four precious lives lost just to get flashing lights at a passive level crossing. This is completely unacceptable.

Inadequate signage, poor visibility, overgrown roadside vegetation, the absence of rumble strips and poor lighting on the train were all factors that contributed to the accident that killed our family members.

Our collective goal through this harrowing and grief-stricken period was to prevent other families from losing loved ones.

Little did we know how many bureaucratic hurdles were ahead of us, and how disillusioned we would become.

We embarked on an exhaustive lobbying campaign to try to get strobe lighting on trains and better signage at railway crossings and on rural roads.

Something as simple and inexpensive as a stop sign could have saved all three of our family members.

We were buoyed with hope when then-State Coroner Alastair Hope recommended that trains be fitted with rotating beacons in 2001, only to have these hopes dashed in February 2002 following an Australian Road Research Board contract report called Conspicuity of Enhanced Lighting Treatments for Railway Locomotives prepared for Western Australian Government Railways.

The report’s only recommendation was that motorists be educated to actively scan for trains when approaching a crossing, which effectively absolved government or railway groups from taking any action.

An independent assessment of the trial conducted by ARRB – which formed the basis of the aforementioned report – found several significant flaws in the research including sample bias and inadequate statistical power.

Three State Coroners from WA, NSW and WA have all recommended freight trains should be fitted with rotating beacons.

But, an entrenched reluctance for change at the Federal and State Government level means we have not yet achieved our goal to get rotating beacons on freight trains.

To this day, I believe trains remain the largest, most dangerous, and poorly lit vehicle on land.

Our families witnessed first-hand how the government departments in charge of road safety can engineer outcomes to suit themselves and just how incredibly onerous that bureaucratic minefield is if you stick your neck out and try to improve community safety.

In June 2017, I found old wounds being reopened following a tragic accident in the Pilbara that claimed the lives of Mark and Lara Dawson and lead to the custodial sentence of fellow pastoralist Cob de Pledge in October last year.

In that case, the accident happened on a section of roadworks where both 80km/h and 60km/h signs were lying flat on the ground.

They were temporary signs but they should have been permanent – as stipulated by the Main Roads guidelines.

Once again, inadequate signage was a contributing factor in a terrible accident that has left two good families living with tragic consequences every single day.

This accident was the catalyst for a petition launched by North West Central MLA Vince Catania, calling for the State Government to establish an independent bipartisan committee to conduct a review into Main Roads road works signage.

Along with many others, I threw my full support behind the petition, helping to distribute and gather petitions from our cattle station 80km north-east of Mount Magnet.

The response was incredible with more than 5000 signatures from all over the State collected in a matter of weeks.

It was with a sense of disappointment but little surprise last week when I learned of the make-up of the Reference Group of key stakeholders and industry representatives established to guide the Regional Road Signage Review.

A review of this nature will not be genuinely independent if it is top-heavy with bureaucrats and chaired by one currently employed by a government department with a heavy Main Roads background.

Having said that I hope the chair Dennis O’Reilly takes on his role as chair with serious interest, diligence and consideration for the families who have lost loved ones or been affected directly by poor Main Roads signage on our rural roads.

There is no doubt in my mind that safety regulations governing roadwork signage in regional WA need a massive and long-awaited overhaul.

Main Roads and their contractors are charged with the responsibility of keeping signage and safety up to Australian Standards and they are falling well short of our community’s expectations, needs and our safety.

All we want is honesty, transparency, and accountability from Main Roads.

It remains my opinion that signage if permanent (and installed properly) and effectively managed (if temporary) is the cheapest and most effective way to save lives on our rural roads.

It is my sincere hope that this Regional Road Signage Review will deliver permanent and lasting change so further fatalities on regional roads can be prevented.

Just for once, I would like to see the government organisations responsible for road safety driving the change from within instead of leaving it to grieving families.

I will be following the Regional Road Signage Review extremely closely as will the 5000 plus signatories of the petition calling for road signage requirements to be upheld and adhered to. This should not be too much to ask. 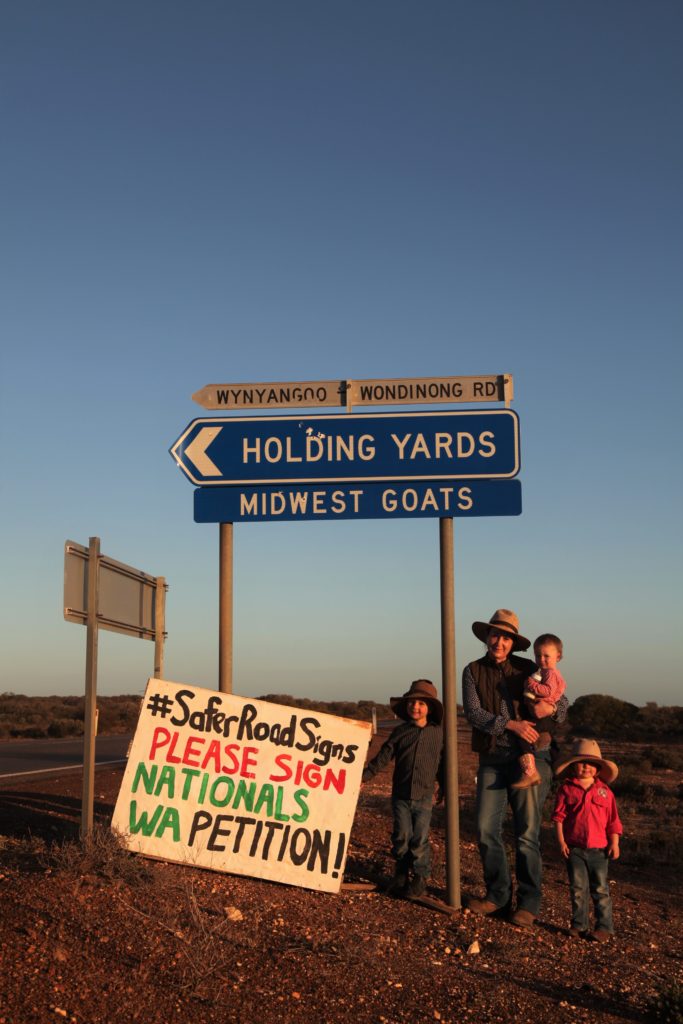 < Generations of Innovation at Wirrealpa station > From brats to bovines