As I mentioned in our introduction my husband Hugh and I run Barrygowan as part of the family business, Tinnenburra Pastoral Company.  I thought I would talk about what has been involved since my husband’s family came to own it, we followed a few years after Geoff Arthur but in a way, little had changed.

I have done my best to accurately give you a timeline of the property but apologise up front if I am incorrect as the content below is through my understanding, if I have got it wrong in any part, I hope you forgive me!

Hugh’s parents, Lindsay and Carol, purchased the aggregation in 2001 as it offered flooded country that was 1.5 hours due west from the main business. They were planning for the future with 2 teenage children, Hugh and his sister Victoria, who had both grown up on the land and were keen to be part of the family business. 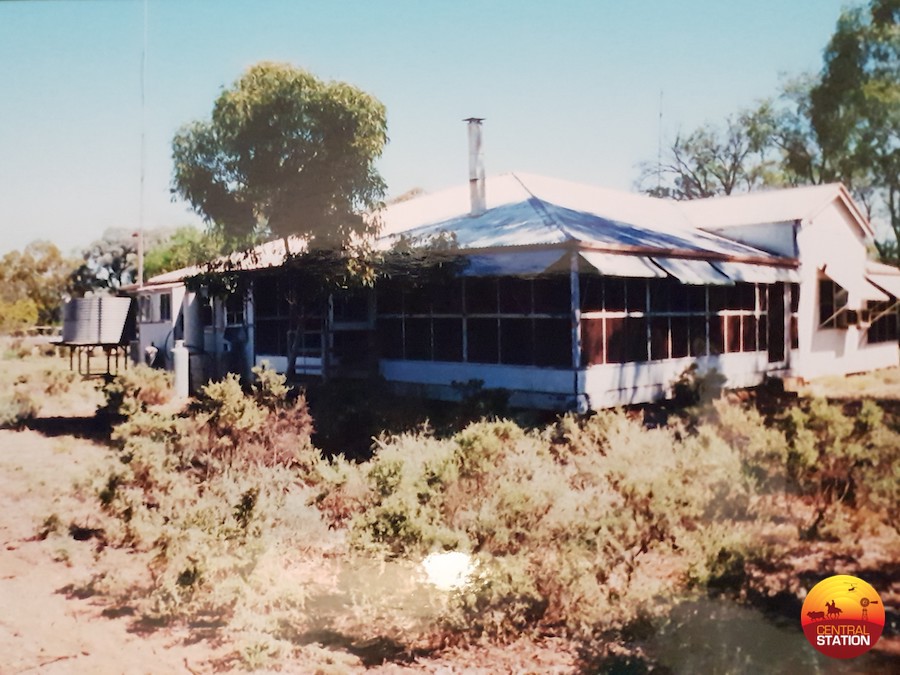 The Barrygowan Homestead on arrival 2001.

Barrygowan, like many properties in South-west Queensland, had been vacant for many years when Hugh’s family purchased it. It is a common thing in these parts for a homestead to be a wonderful family home for 10-15 years and then be left vacant and unloved for equally as long as the next owners choose to base themselves on another property or out of the district altogether.

But just like a cherished jewel, after a scrub, polish and a fair bit of renovation innovation, they are bought back to life and are ready to service the next family that has arrived to love them.

The makeover for Barrygowan was not easy. The family called on Brisbane-based architect and friend David Murray to draw up renovation plans which when completed, called for the homestead historical character to be maintained but to be nearly fully renovated to be able to service a modern family. The workforce was pulled together using the skills of trusted friends and tradesmen, their friends and of course the family!

The external verandah on the north eastern side (as seen above) was removed to create an open verandah. The bathroom was moved to the north western corner of the house to be able to accommodate an indoor toilet and shower area. The old bathroom was then turned into a study space (where I am writing this now) and the old outdoor toilet converted to a ‘modern’ toilet and joined to the house by a charming little walkway. 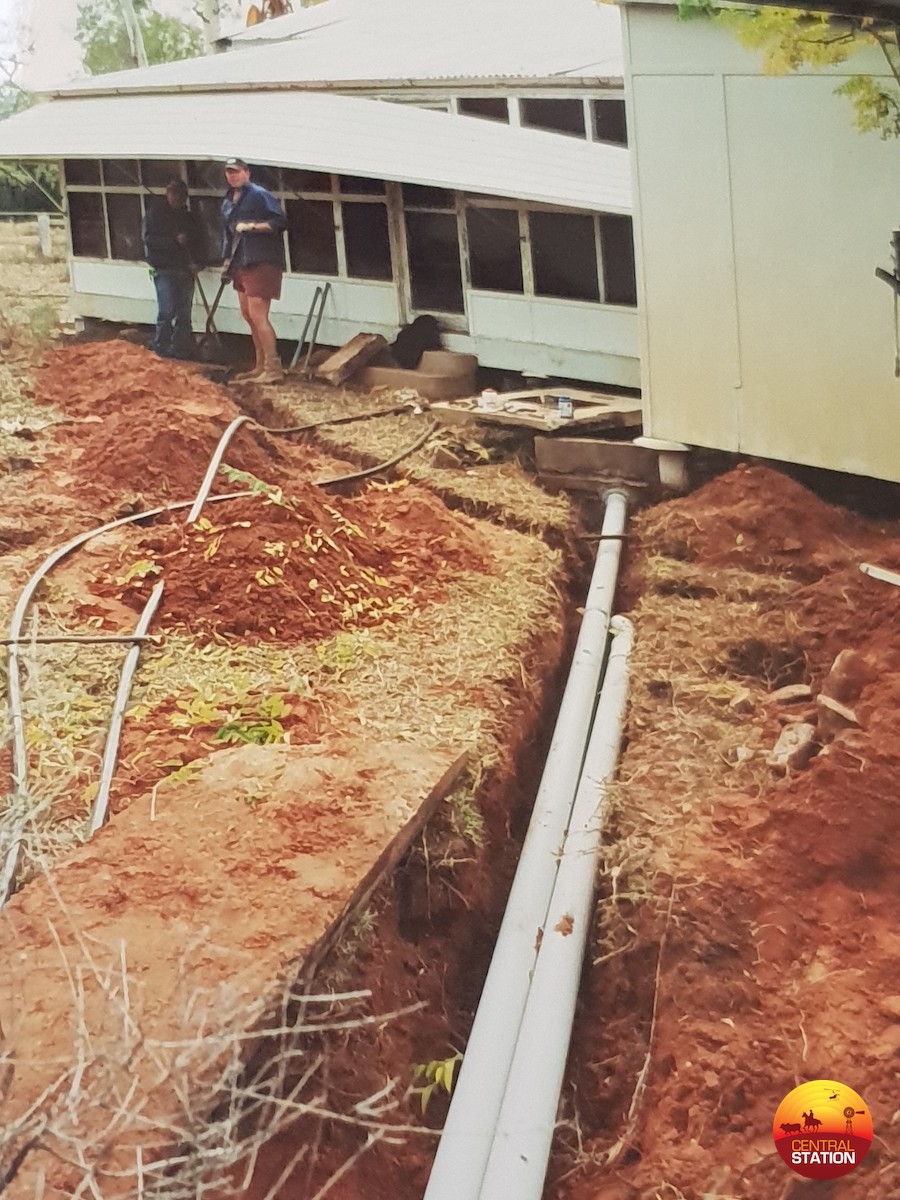 The plumbing to where the new bathroom would be built, closing in part of the northern verandah.

The kitchen, which was an old 50’s style, was removed as was several of the internal walls to create an open plan living and dining area and to allow a new kitchen to be installed. A new bedroom was created at the end of the kitchen turning the house into a 3-bedroom home. 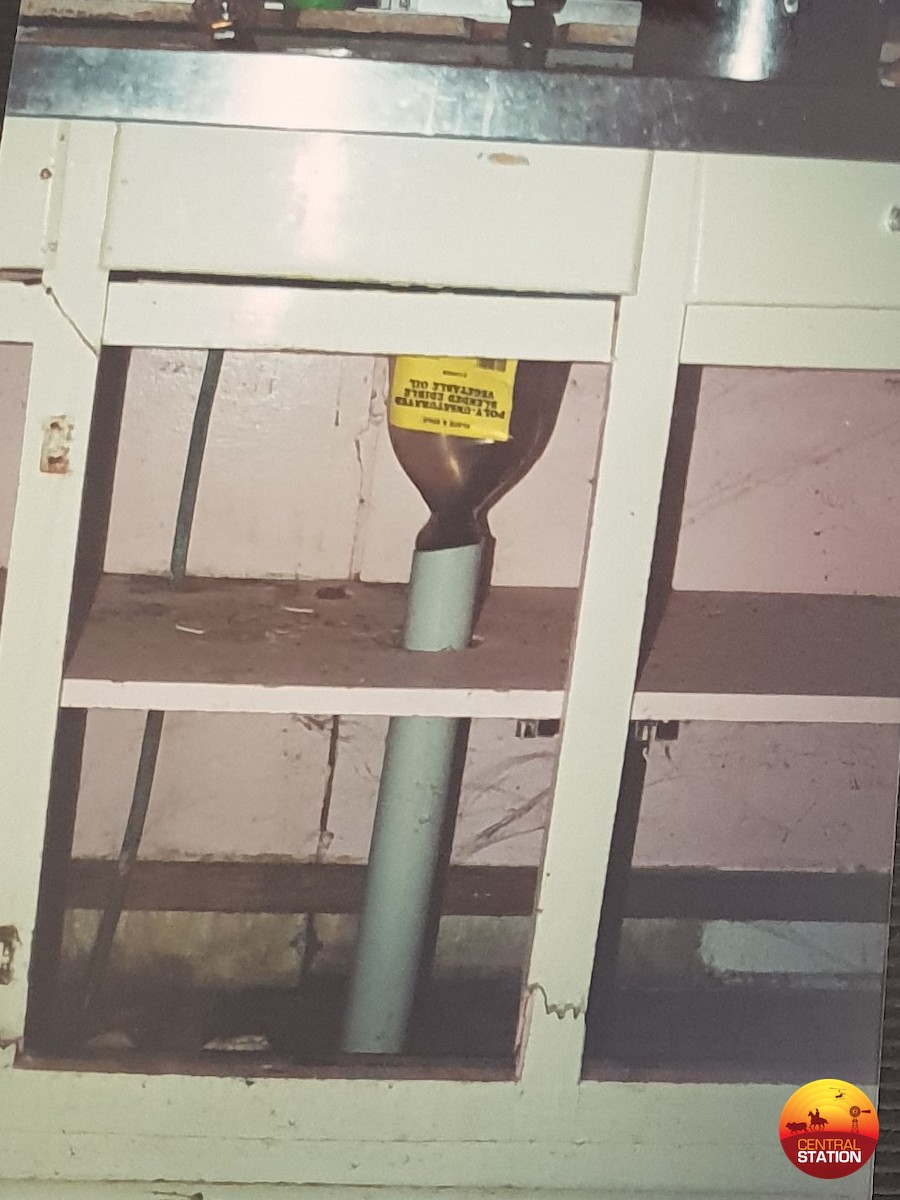 Some of the creative original plumbing. 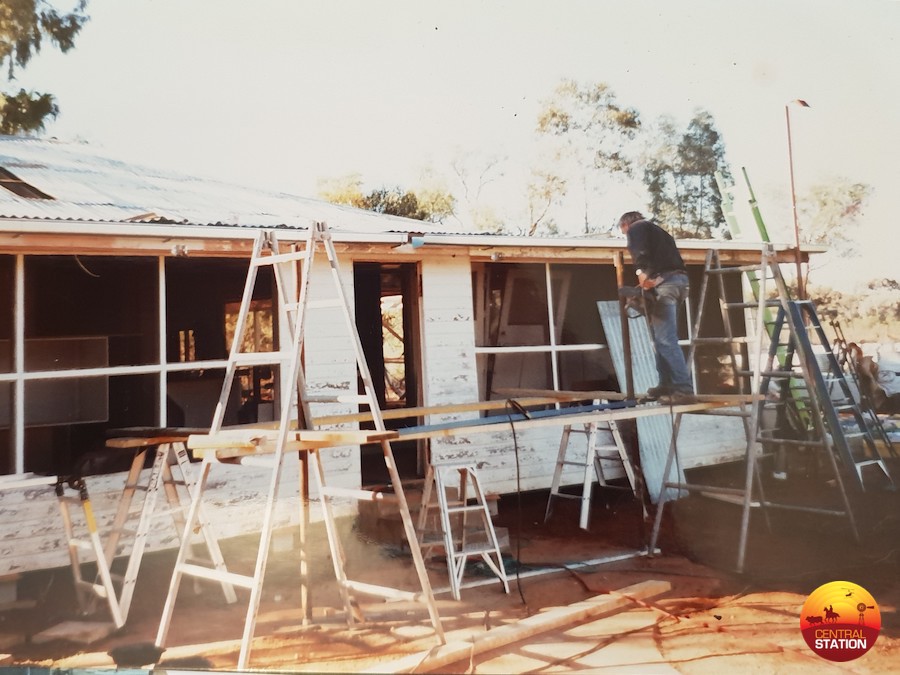 The start of the western verandah/kitchen renovations.

The list of jobs was huge and on top of the house the governess quarters were fixed and made functional, the pool (installed 15 years earlier) pumped and painted, the Shearer’s quarters were plumbed and made liveable, furniture was made, telephones connected, aerials installed and airstrips graded.

To say there was a solid workload would be an understatement. The house was completed to the credit of the many families involved in one huge session approximately 6 weeks long, complete with beautiful polished floors, a 14ft dining table made from the old wool press and many other beautiful features reinvigorated. 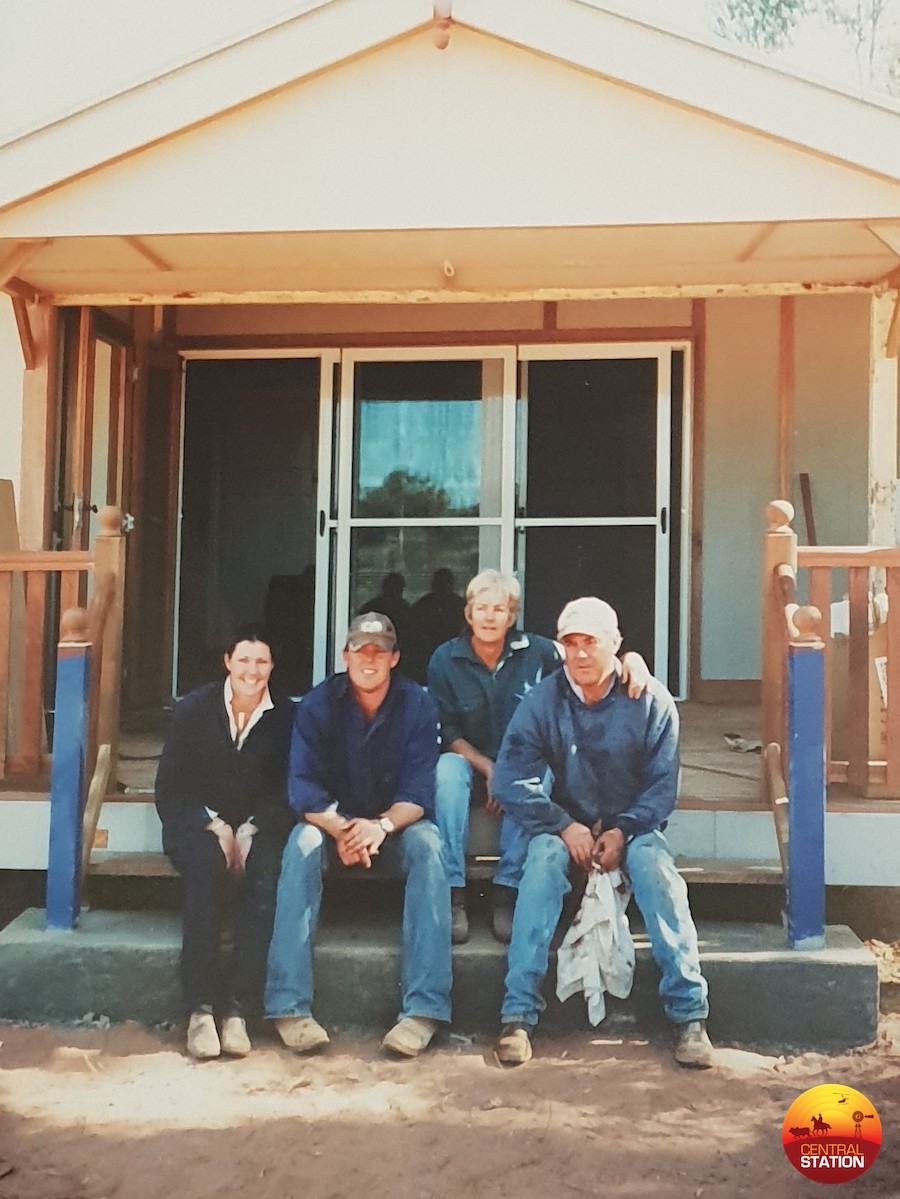 Victoria, Hugh, Carol and Lindsay near the end of all the hard work on the front stairs.

At the completion of the renovations, the house became the eastern base for the family. The family would travel between Tinnenburra and Barrygowan, which is about a 1.5 hour drive or 1/2 hour flight apart, to manage the family’s herds between the two properties.

Over the next 9 years the focus for the Godfrey’s was to improve the wonderful natural asset that was Barrygowan. Bore capping and poly piping schemes were installed with tanks and troughs providing a reliable, low maintenance, low evaporation alternative to the old ‘bore drains’ that were servicing the properties.

The shearing shed, after being damaged by a large storm was re-built and air-conditioned, roads were graded and new fences erected when the budget allowed.

Hugh and I had been based all over the state, partly due to my job and partly his. No matter where we were based he regularly returned to Barrygowan and Tinnenburra to help his parents with the stockwork. In 2010, after a time working away, newly married and following some drought breaking floods, Hugh and I made the decision to move back to Barrygowan and make it our home.

Our arrival at Barrygowan was one of speed as we were awaiting the removal van in Emerald, when we saw a significant rain event building in Cunnamulla. The kindly semi-retired gentleman from St George Removals arrived and we were packed shipped and out of Emerald 4 hours later. We stopped at Surat overnight before heading off at daylight.

The truck arrived just behind us and with heavy rain clouds building, we rallied the troops and were unpacked within 1.5 hours and the removal truck and all of our helpers were heading out the front gate just as the rain began to fall. That rain was the beginning of what turned out to be the 2010 south-west Queensland flood event. 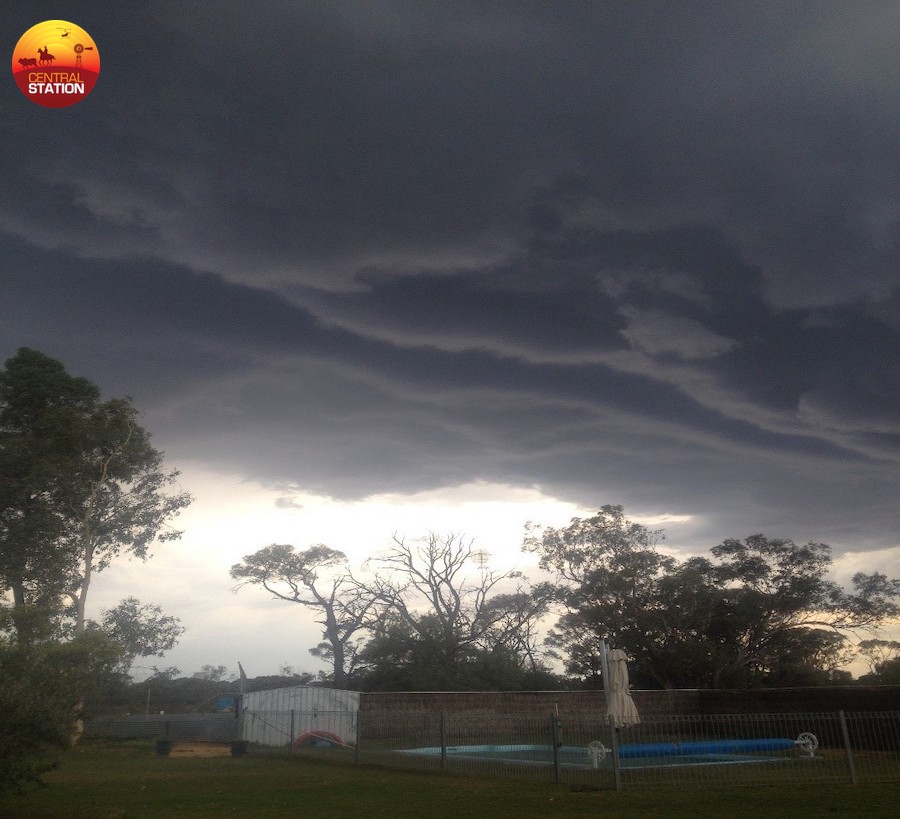 The rains, albeit rare these days, can fall in this blue sky country.

For the next 4 weeks, Hugh, my mother and I were stuck at Barrygowan, too wet to go anywhere and not really prepared. Luckily for us, Mum is a keen gardner and we all got stuck into digging weeds and running many a trailer load of sheep poo from under the shearing shed to the lawn and gardens. We also dedicated a good 2 weeks to removing the buffle that had taken hold in the once ‘pride of the district’ tennis court and the swimming pool. 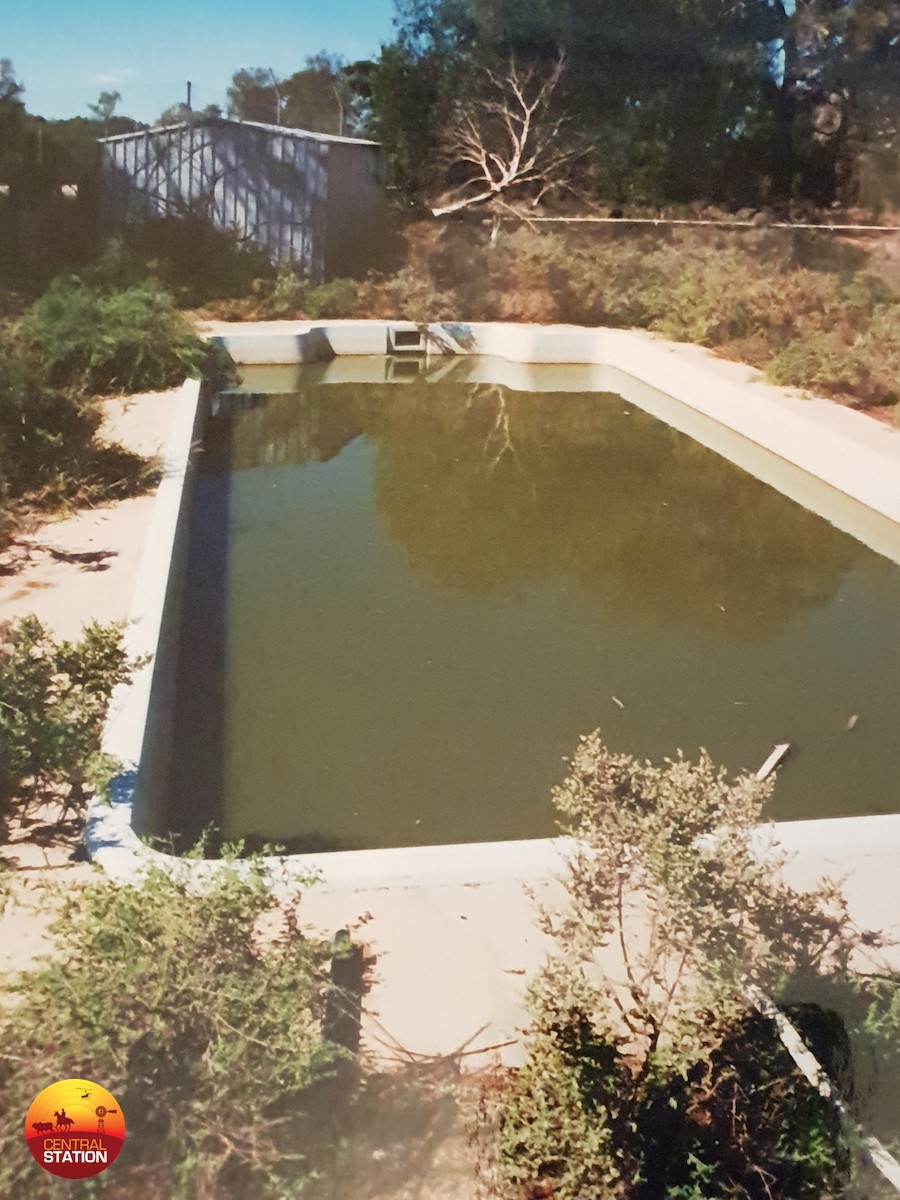 When we finally pumped the pool, we found several kangaroo, bird and reptile skeletons in the muck.

Although we achieved a lot, after 4 weeks my Mum had well and truly had enough and we were all a bit stir crazy and I had to return to Gladstone to fly the plane back from the workshop after maintenance. So during a rare 1/2 day dry-patch, Hugh and I drove both our Landcruiser ute and wagon the 7km up our muddy driveway to the main dirt road. The next day, after more rain we put the trailer on the quad, filled it full of bags, 2 dogs and the 3 of us and headed the 7km up the driveway to the vehicles – needless to say by the end of the driveway we all needed a change of clothes before getting in the cars!

The next 2 hours involved my husband driving lead in the ute and me following in the wagon with Mum and the instructions “just stay in the wheel tracks, you’ll be right”.  Now having grown up on an island, this flooded, muddy, slippery, blacksoil track driving was a new thing; “Do I go fast? Do I go slow? Oh my god what if I get bogged?”.

So after about 1.5 hours of driving white knuckled and about to throttle my mum if she said one more time “Stay in the wheel tracks, you’re doing well love”, I got on the UHF told Hugh to stick it and come back and drive the wagon out himself. The next hour was spent doing an awkward vehicle leap frog until we finally made it to the bitumen a couple of hours later.

We pulled up at the next creek crossing and had a swim to clean up and got on our way. That was my welcome to Barrygowan, the beginning of our adventure and the first of my many lessons to always expect the unexpected living on a station.